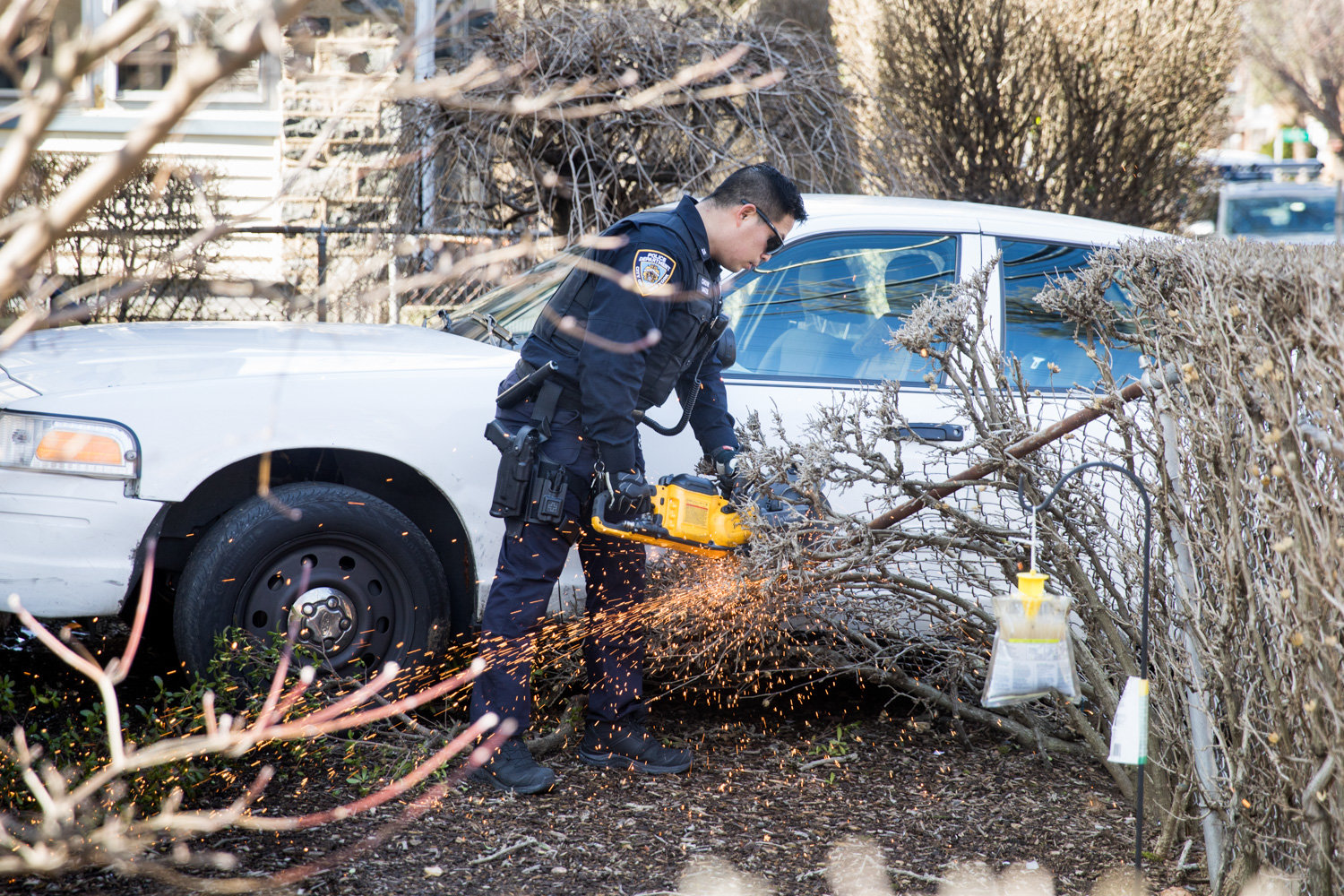 A police officer cuts away part of a wire mesh fence outside 400 W. 261st St., where a car crashed through the fence on the morning of Feb. 27,
JULIUS CONSTANTINE MOTAL 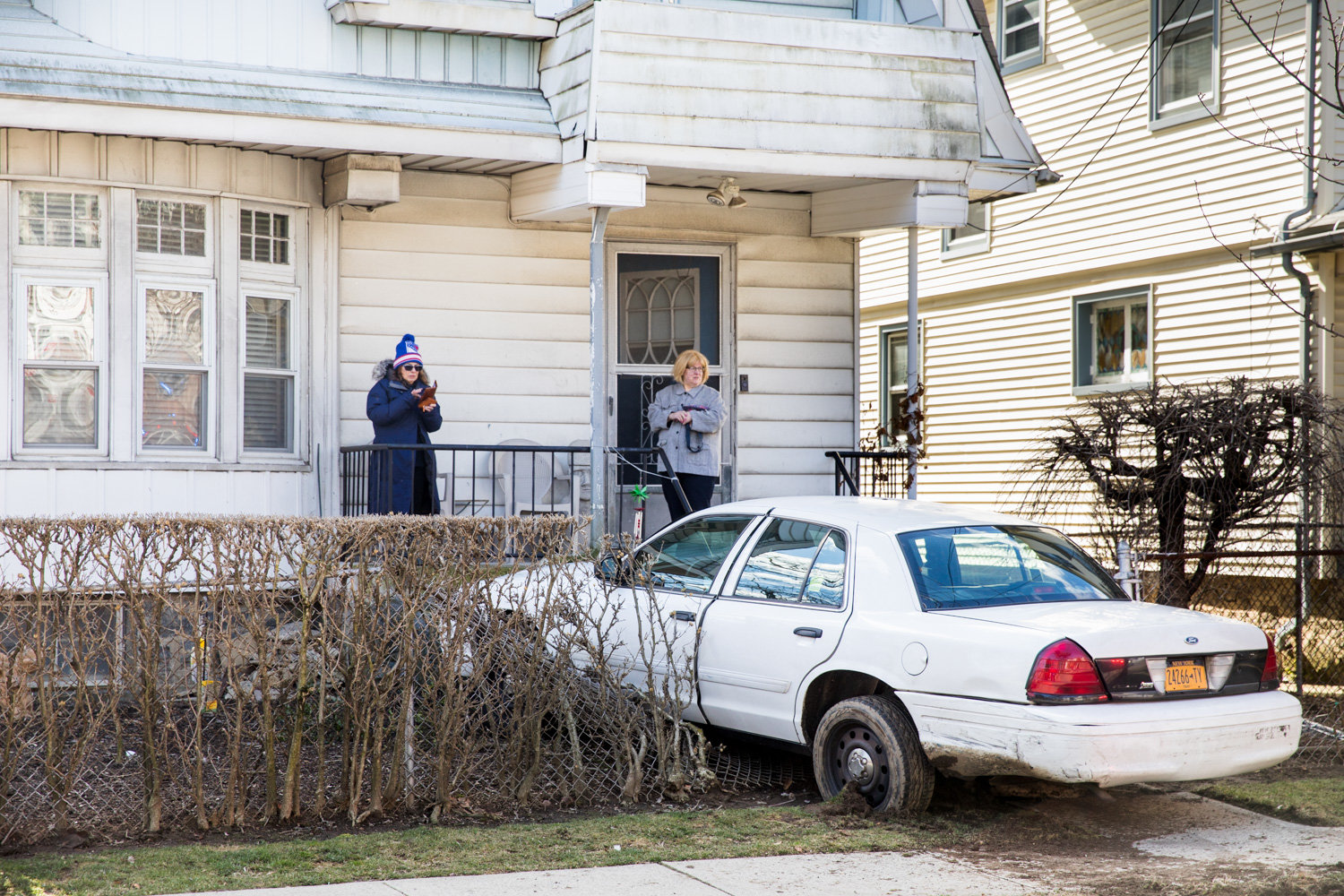 An allegedly speedy driver reportedly popped the curb and plowed through the fence at 400 W. 261st St., on Thursday, Feb. 27, which some neighbors took as another sign that something needs to be done to make drivers slow down on the popular steet that connects Riverdale Avenue and Broadway.
JULIUS CONSTANTINE MOTAL 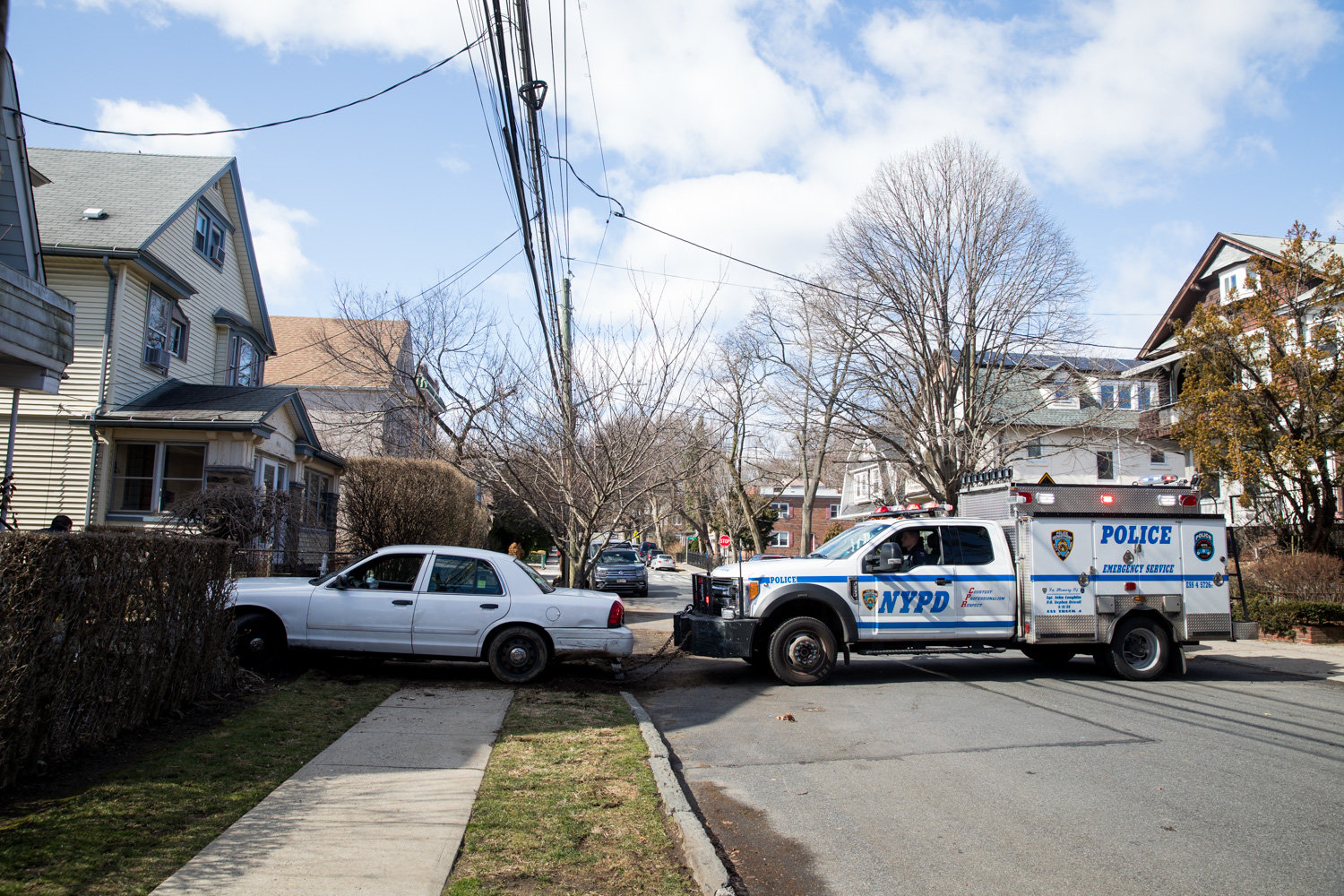 A police truck pulls a car from the lawn of 400 W. 261st St., on Feb. 27, where a driver had crashed through the fence. Neighbors said the area is famous for speeding and drivers ignoring stop signs.
JULIUS CONSTANTINE MOTAL 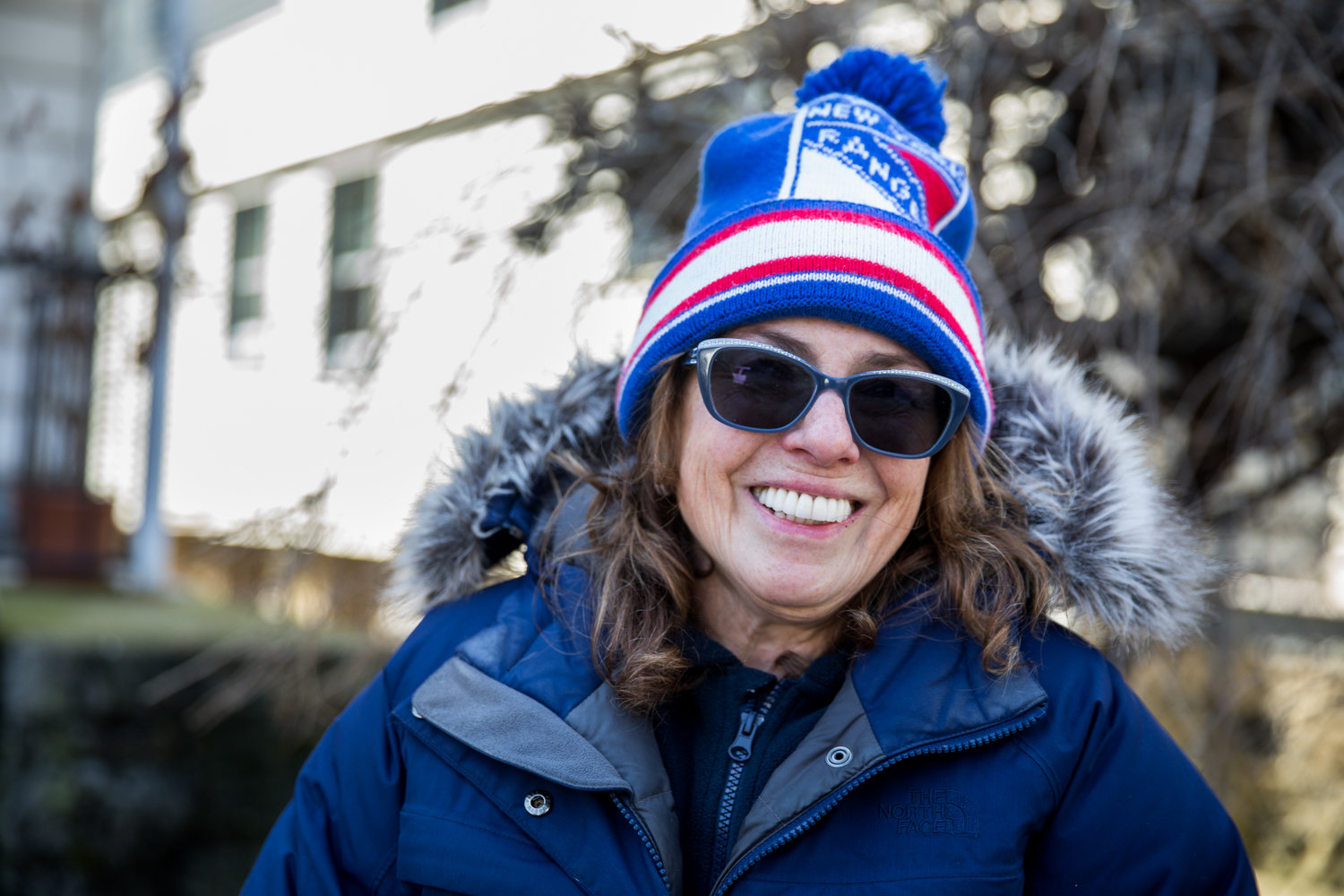 Harriet Fritz is glad no one was seriously injured when a car crashed through the fence outside her North Riverdale home at 400 W. 261st St. She’s also happy no harm came to her flock of ducks in the side yard.
JULIUS CONSTANTINE MOTAL 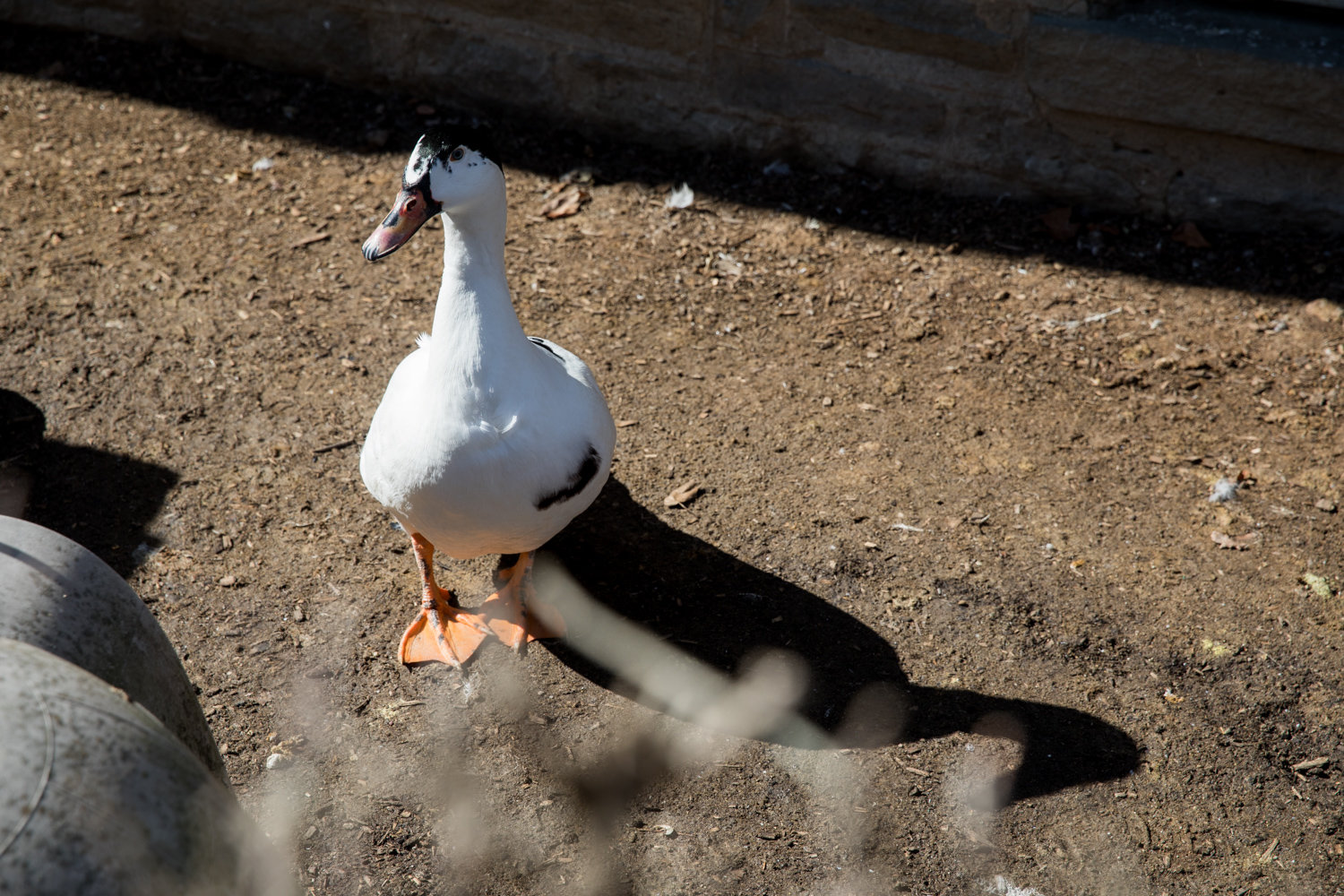 The ducks are all right after a car crashed through the fence outside their home at 400 W. 261st St., the morning of Feb. 27.
JULIUS CONSTANTINE MOTAL
Previous Next
By KIRSTYN BRENDLEN

A quiet Thursday morning in North Riverdale turned a little more unusual for Harriet Fritz and her neighbors when a car crashed through her fence and finally came to rest in her front yard.

It happened just before lunch on Thursday, Feb. 27, when a white Ford sedan fitted with taxi plates reportedly hit a blue Honda driven by Erika Lopasio on West 261st Street, according to police. The taxi swerved, crashing through the chain-link fence and into the front yard of 400 W. 261st St.

A passenger in the taxi was taken to St. Joseph’s Medical Center in Yonkers with leg pain, according to the 50th Precinct, but no one else was injured.

Lopasio, who was physically unscathed, said her grandmother lives in the neighborhood, and she knows that the intersection where West 261st Street crosses Tyndall Avenue can be tricky.

There are two stop signs guiding traffic at that juncture, but only those drivers moving north and south on Tyndall have to stop. West 261st Street, on the other hand, is a through street at that point, helping to link Riverdale Avenue to its west with Broadway.

The taxi stopped short of hitting the house, owned by Harriet Fritz, but instead took out fence posts and gouged holes in the yard. Fritz stood on the front steps of the house watching New York Police Department offices prepare to tow the taxi out of her front yard, one of the men in uniform handing her a small American flag decoration that had become trapped under the car’s wheels.

Neighbors emerged from their homes to check out the commotion. Kathy Browne, who’s lived in the neighborhood since 1997, said she wasn’t surprised that someone may have been driving dangerously.

“Honestly, people blow stop signs all the time on this street,” she said. “All the time. Actually, what I think would help is a speed bump, or a couple more speed bumps to force people to slow down.”

West 261st has a slight decline as it winds from Riverdale Avenue to Fieldston Road, and Browne thinks the hill encourages people to drive a little faster down the stretch.

While speeding hasn’t necessarily gotten worse over her years observing people driving by, Browne remembers another accident just across the street a few years ago.

“So, this is a very bad area,” she said. “There are speed bumps on other (streets). I don’t know why they don’t have them here.”

The traffic control devices do dot some of the surrounding streets in the quiet neighborhood, including several on Fieldston Road near the entrance to the Henry Hudson Parkway. Government officials tend to limit the number of speed bumps placed on public streets because while they might slow down regular traffic, it also can hamper the speed of emergency vehicles like ambulances and fire trucks.

Fritz wasn’t worried about the damage to her property as long as everyone was OK.

“As long as nobody was hurt, then it’s fine,” she said. “This is the most important thing, that people are OK. It’s only material things, we can’t worry about them.”

As police attached chains to the wrecked car’s back bumper, Fritz and her neighbors had one shared refrain: “As long as the ducks are OK.”

An uncommon sight in the Bronx, Fritz’s side yard is the home to a small flock of waterfowl — and she said it’s the only home in the Bronx that’s allowed to keep the feathered animals.

They’re the darlings of the neighborhood, and while some feathers may have been shaken, the birds came out of the crash unscathed.

Fritz agreed, however, that the street leaves something to be desired. Just a block away at the intersection of West 261st and Fieldston, there’s a four-way stop with four crosswalks.

“This should be a four-way stop,” Fritz said of her intersection with Tyndall. “They have a four-way stop down there, and they didn’t put one here. What is the reasoning for that?”

Fritz sees accidents like this one “all the time,” even remembering vehicles crashing into the front yards of at least two of her neighbors in the not-so-distant past.