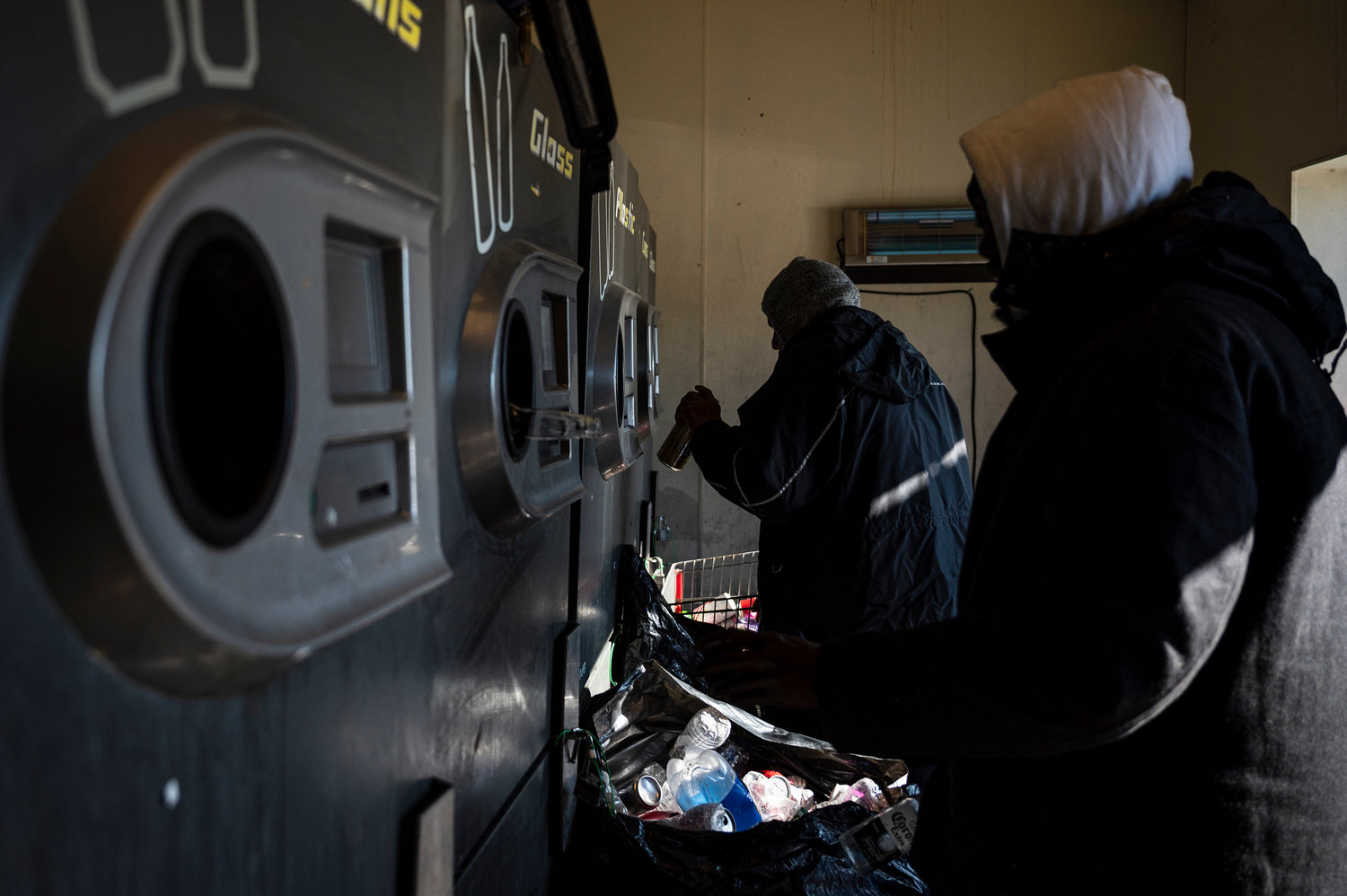 People loading glass bottles and aluminum cans into reverse vending machines like this one at Broadway’s Stop & Shop grocery store, typically collect 5 cents for each container. Now a coalition of environmental groups wants Gov. Kathy Hochul to double that deposit to a dime while including more kinds of containers.
HIRAM ALEJANDRO DURÃN 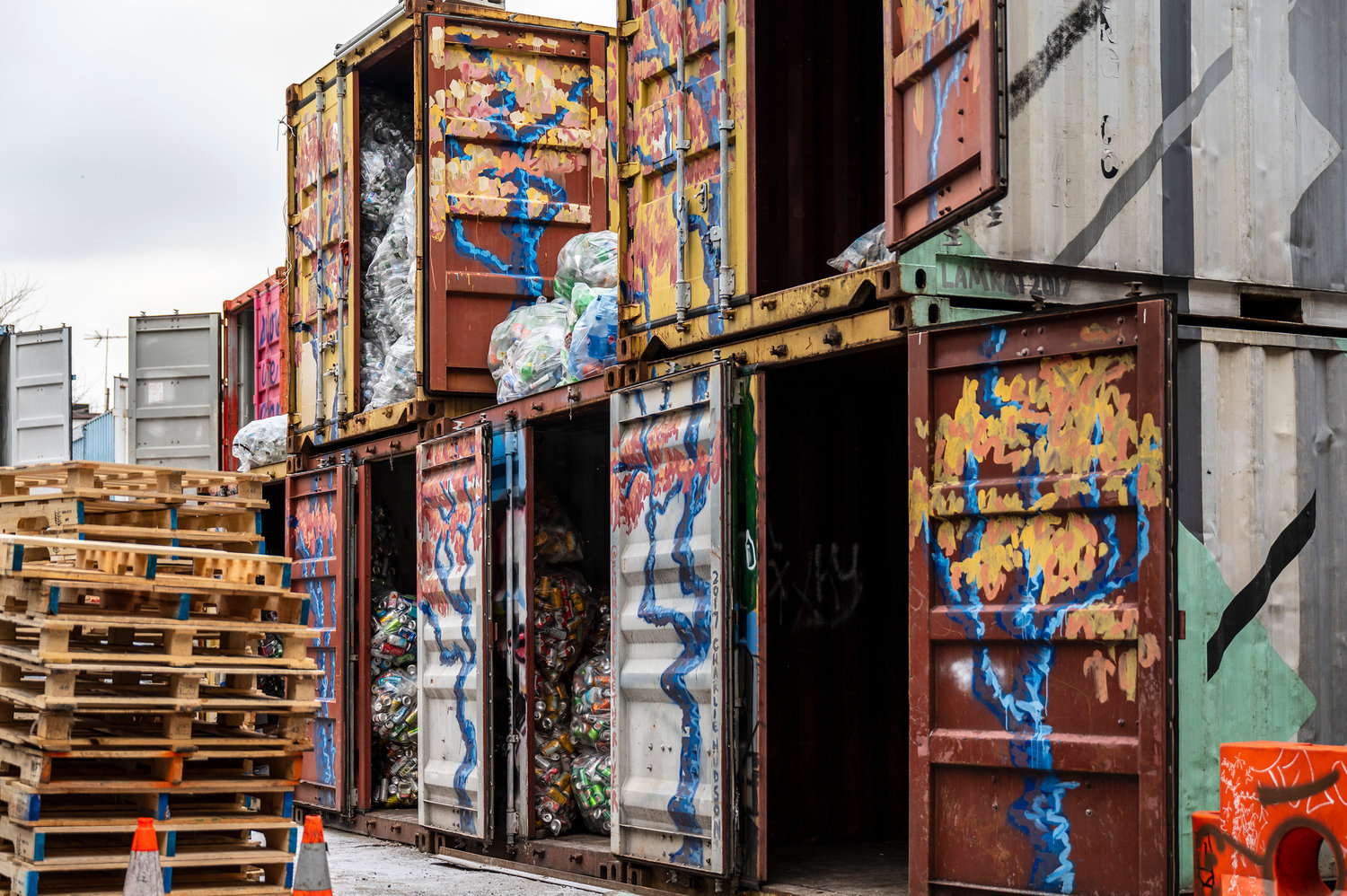 Shipping containers are filled with recyclable cans and bottles at the Sure We Can redemption center in Brooklyn’s East Williamsburg neighborhood. Sure We Can is part of a coalition to expand the state’s bottle bill — a law allows recyclers to collect a 5-cent deposit on many disposable containers — that would double such deposits to a dime.
HIRAM ALEJANDRO DURÃN 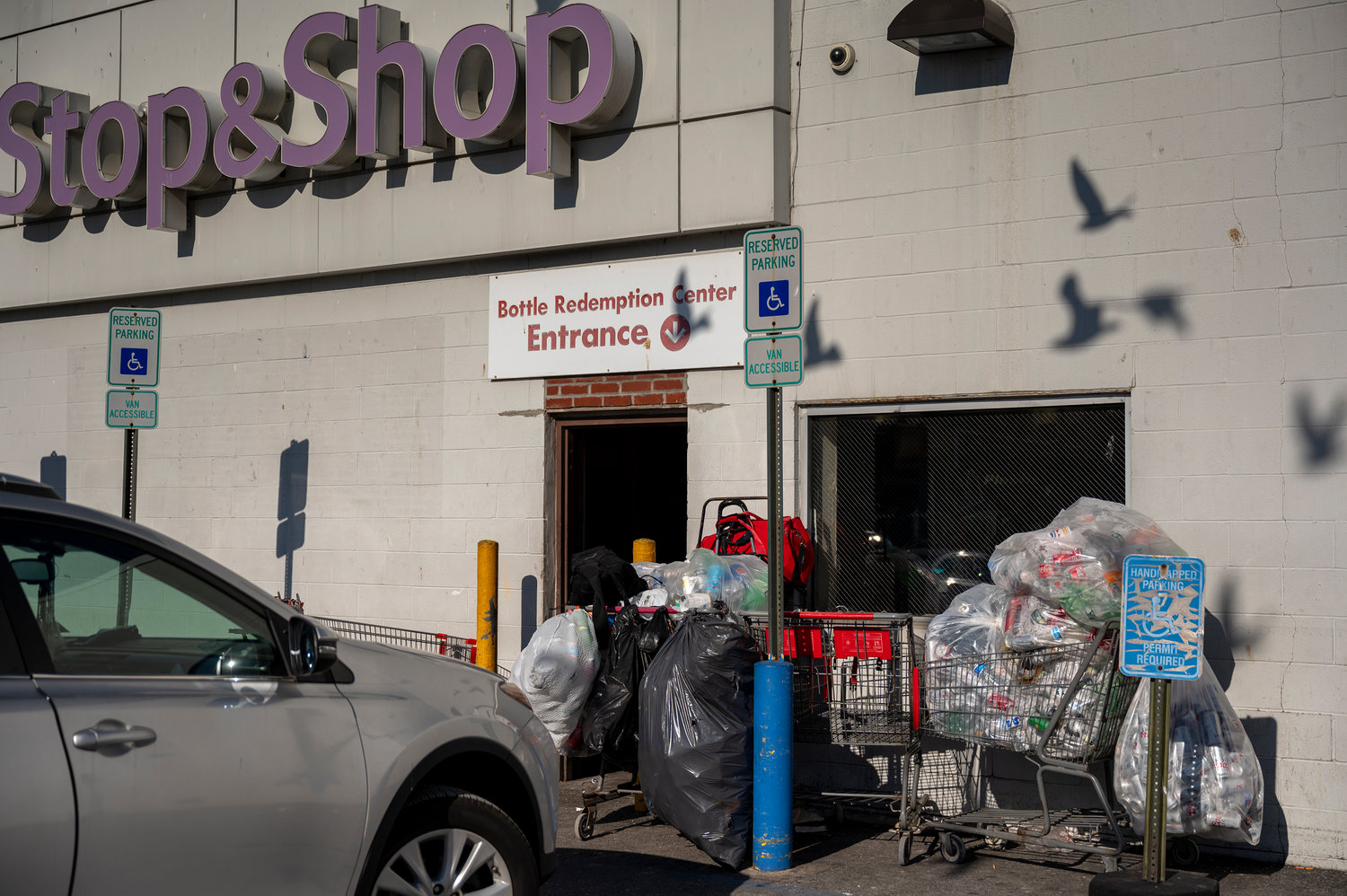 People loading glass bottles and aluminum cans into reverse vending machines like this one at Broadway’s Stop & Shop grocery store, typically collect 5 cents for each container. Now a coalition of environmental groups wants Gov. Kathy Hochul to double that deposit to a dime while including more kinds of containers.
HIRAM ALEJANDRO DURÃN
Previous Next
By ETHAN STARK-MILLER

For anyone who has lived in New York — even for a short time — chances are they’ve noticed rather regularly people traversing the streets with shopping carts filled with recyclables.

But why would so many people spend so much time rifling through other people’s recycling bins, treating those collected bottles and cans as gold?

There are five reasons, each one worth a penny, which is the nickel consumers pay when purchasing a soda or bottled water. The idea is that same consumer would then recycle their container to get that nickel back. Instead, recycling has become a rather profitable street business for anyone willing to put in the time and effort.

This rather interesting market returning 5 cents at a time is hardly new. In fact, it was established through a piece of legislation known as the New York State Returnable Container Act — commonly known as the “bottle bill” — passed some 40 years ago. The bottle bill levies a 5-cent deposit on some recyclable containers — aluminum cans, beer bottles and some plastics — that consumers could redeem by returning those containers back to their seller.

The law was expanded in 2009 to include water bottles.

The bottle bill was originally intended to reduce roadside litter around the state back in the day, according to Ryan Carson of the New York Public Interest Research Group. And it’s been successful, with such trash shrinking by 70 percent since the early 1980s.

And while a nickel might not go as far today as it did during the early days of Ronald Reagan, the bottle bill remained popular as more and more hoped to fight the rising threat of climate change.

But not as popular as it should be. That’s why a coalition of more than 150 environmental, civic and community groups have called on Gov. Kathy Hochul to include a “bigger, better bottle bill” in this year’s state budget. The coalition also includes bottle distributors and redemption centers — organizations that pay individuals for collected recyclable containers, count the containers, sort them and give them back to beverage distributors.

Carson, who leads that coalition, says while the bottle bill has been successful in growing New York’s recycling program over the past four decades, it’s long overdue for an update.

“What we’re focused on with the modernization is just getting it up to speed,” Carson said. “it’s been a historically very successful program. But right now, it’s really just kind of contending with inflation around the bottle deposit, and that it doesn’t really make sense what containers are covered, and what containers are not.”

Unfortunately, Carson said, Hochul didn’t mention expanding the bottle bill in her State of the State address last month, or include it in her executive budget proposal unveiled soon after. So, Carson’s coalition looks to join with Long Island state Sen. Todd Kaminsky and Assemblyman Steve Englebright — past champions of the bill — to get this legislation included in the budget.

Accomplishing that could mean increasing the deposit amount from a nickel to a dime while expanding the number of different containers covered by the bill.

“So that deposit is really important because what we’ve seen over time is that we’ve really plateaued in our return rate,” Carson said. “And that’s because the financial incentive — which is the core piece of this legislation — doesn’t have as much of a financial impact.”

A typical can of Coca-Cola would cost a quarter back in 1980, according to contemporary reports. The nickel deposit would bring that total to 30 cents, and account for nearly 17 percent of the overall cost

Today, that same can of Coke can cost upward of $2 — that nickel now accounting for just 2 percent of the total cost.

“The example I typically give is, if you could get $1 back for returning 10 containers — as opposed to 20 — you’re much more incentivized to do that,” Carson said.

But it could also help low-income individuals who depend on redemption centers like Sure We Can, which Ryan Castalia runs in Brooklyn.

It will make, “a huge difference,” Castalia said. “We’re talking about doubling some people’s income.” 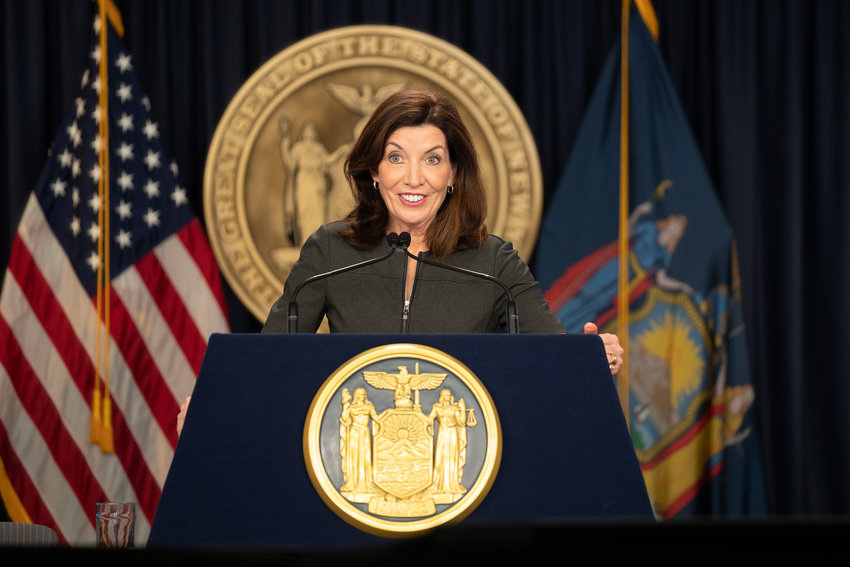 A coalition of more than 150 environmental, civic and community groups is calling on Gov. Kathy Hochul to expand the bottle bill in this year’s …

But expanding the type of containers covered under the law also is important, Carson said — something Kaminsky and Englebright tried (and failed) to achieve in 2019.

Now, the coalition wants to incentivize recycling of containers used for wine, liquor, and hard cider, as well as pretty much any other containers that don’t contain milk or some specific juices.

“Making sure that just about everything is covered in the law is really essential to us,” Carson said. “We’re really trying to expand to all plastics because, for example, you would not be able to redeem a Gatorade bottle (now). So, we really want to expand the plastics and really bring in the liquor and wine industry, since we already have the beer industry involved.”

Oliver Koppell, the bill’s original author and this area’s Assemblyman back when it was first signed into law, says he’s pleased to hear about the potential expansion of his landmark legislation.

“It’s been a very substantial success,” the former councilman and later state attorney general told The Riverdale Press. “And there’s a part of the Bottle Bill that I didn’t really anticipate in that it would become an employment tool for poor people.”

In fact, Koppell wants to expand a new version of the bottle bill across the country, throwing his support behind an effort to pass a national bottle bill in Congress.

“We need it in the 30 odd states that don’t have it,” Koppell said. “There is a group that is working on it, and there are several members of the Congress that are interested in it. And I myself have decided just recently that I want to support those efforts.”

Koppell’s bill was signed by Gov. Hugh Carey in 1982, and last year alone is said to have recycled more than 240,000 tons of plastic, glass and aluminum — just a little less than the total weight of the Empire State Building.

Right now, 10 states and Guam all charge deposits for recyclables, ranging from a nickel in New York to 15 cents in Vermont and Maine.