A designer dedicates his show to Puerto Rican relief 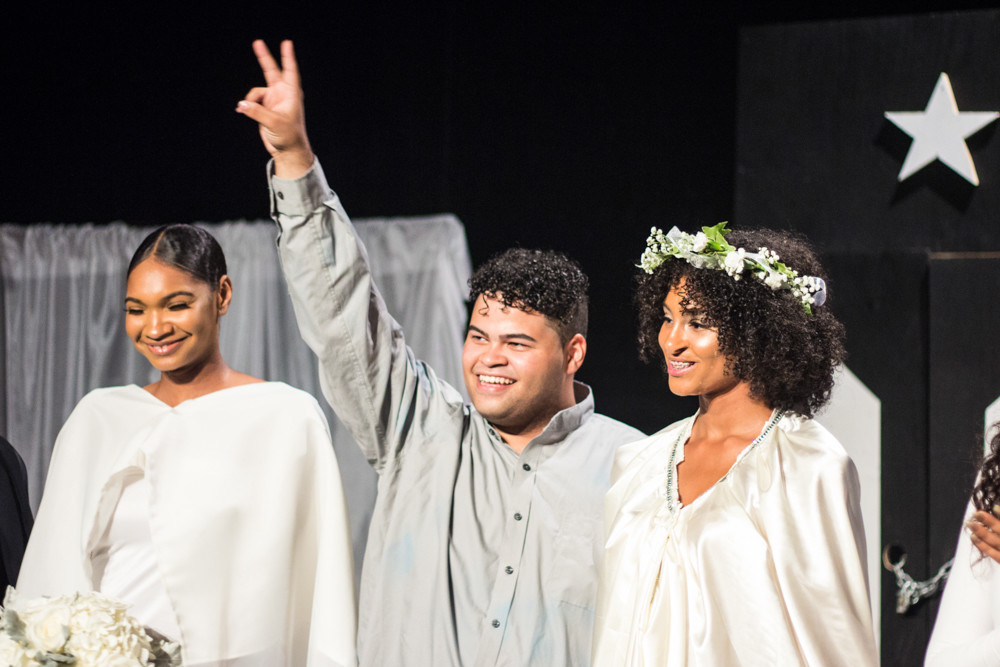 Fashion designer Edwin Reyes rejoices at the close of his third fashion show at The Point on Sept. 14. Reyes, 19, partnered with a non-profit to donate proceeds from the show to the ongoing relief efforts in Puerto Rico.
AARON MAYORGA 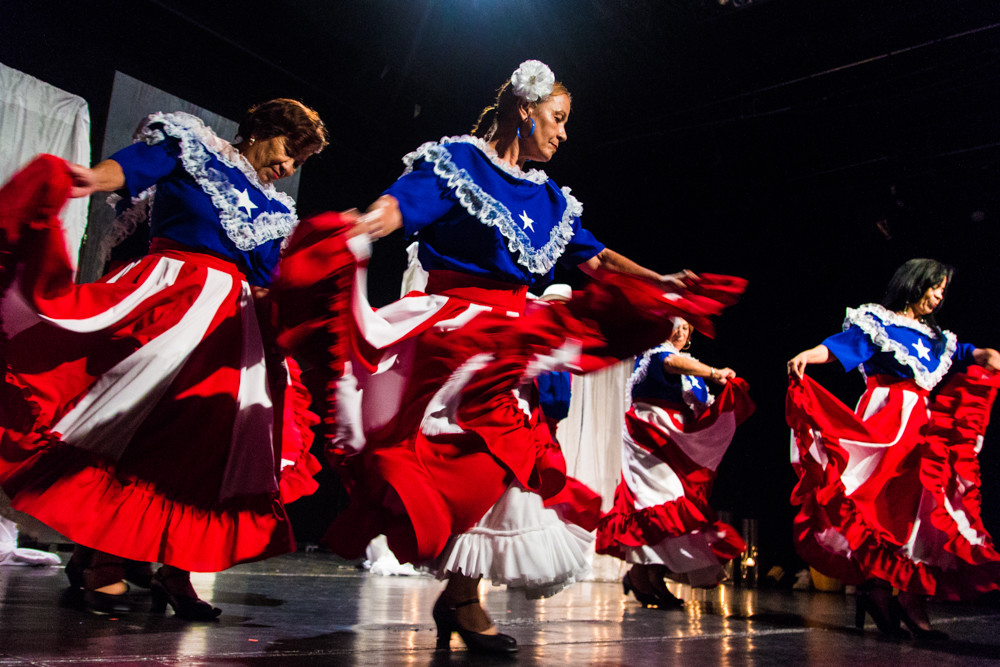 A brief dance tribute to Puerto Rico opened Edwin Reyes’s latest fashion show Sept. 14 in Hunts Point. Donations raised via the show were donated to relief efforts on the island, thanks to a partnership with non-profit Siempre Contigo.
AARON MAYORGA 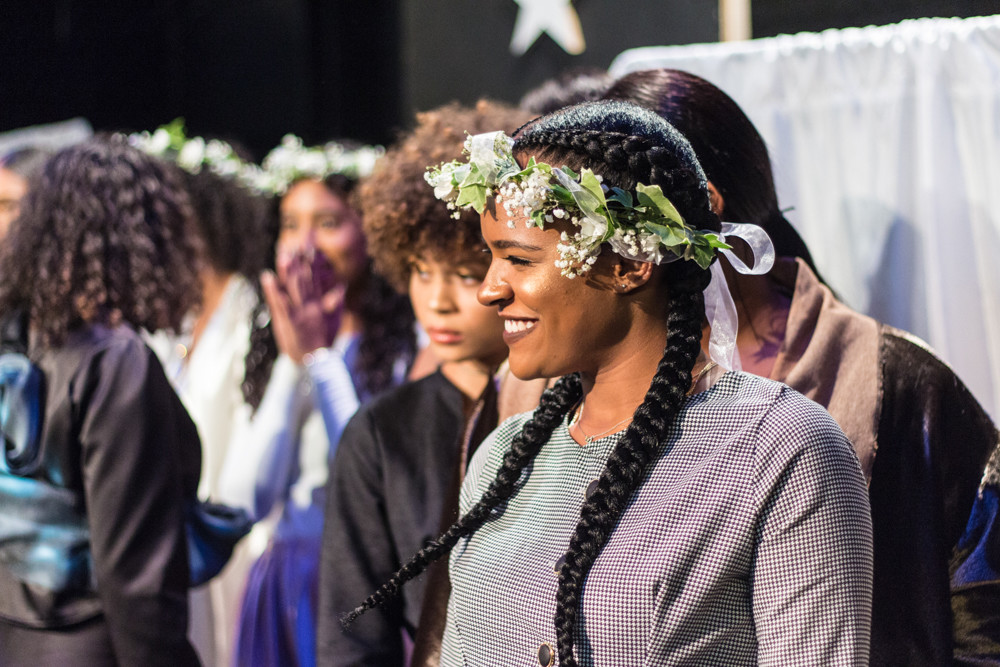 Fashion model Genesis Mojica smiles at the end of the latest fashion show of Edwin Reyes’ brand Finezt at The Point. Proceeds from the Sept. 14 show were donated to relief efforts in Puerto Rico in response to Hurricane Maria.
AARON MAYORGA 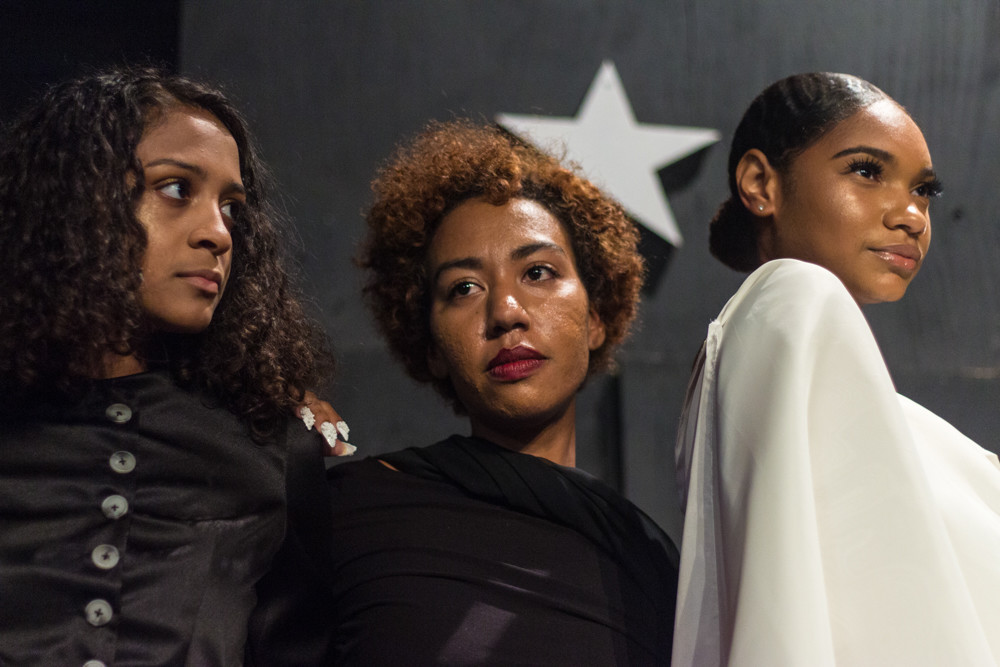 Models stand for photos during Edwin Reyes’s latest fashion show Sept. 14 at The Point. The show was in honor of Puerto Rico and was used to raise money for relief efforts in partnership with Siempre Contigo.
AARON MAYORGA 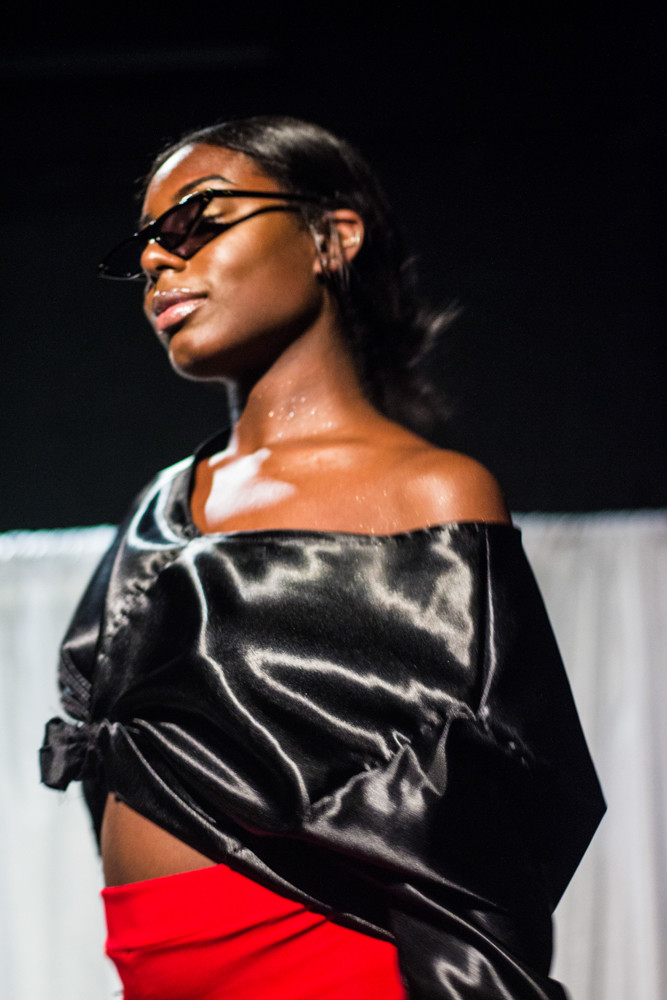 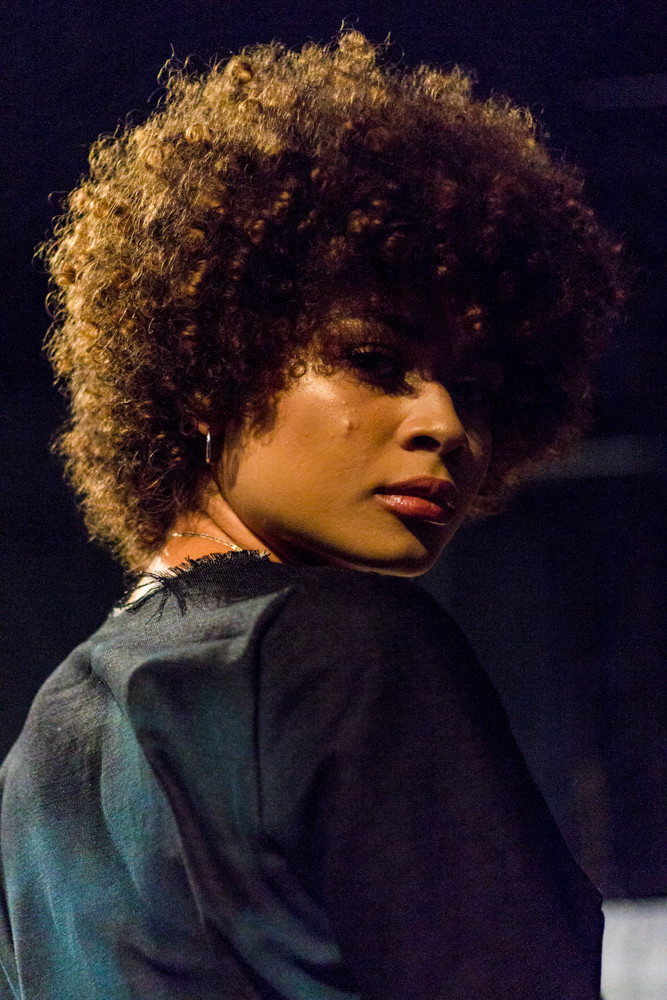 Fashion model Marilyn Nieves looks over her shoulder as she walks in Edwin Reyes’ third fashion show at The Point on Sept. 14. A portion of the ticket sales and donations were given to the relief efforts in Puerto Rico.
AARON MAYORGA 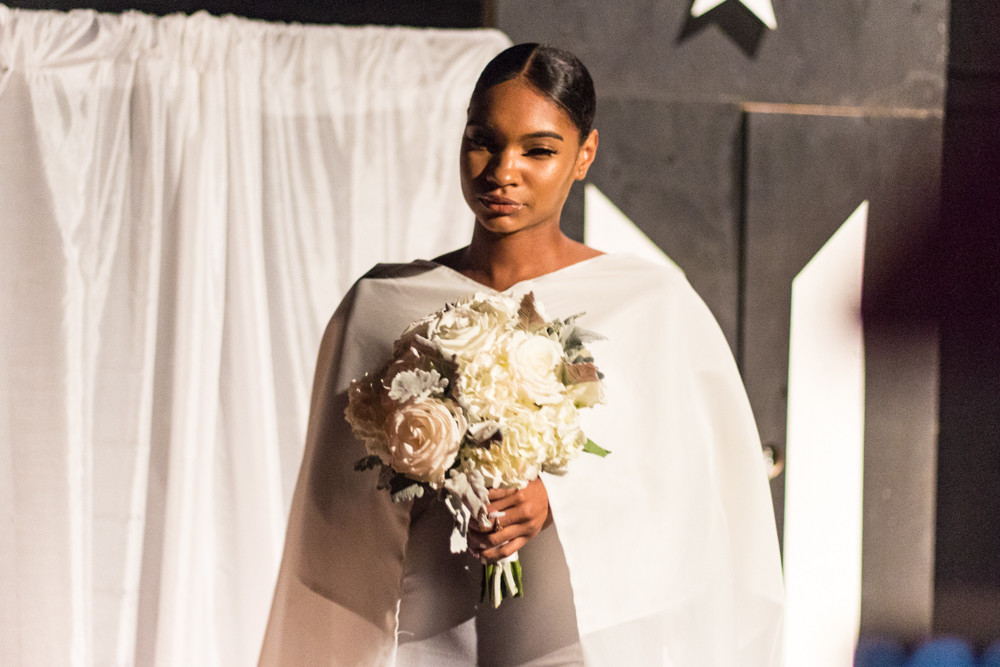 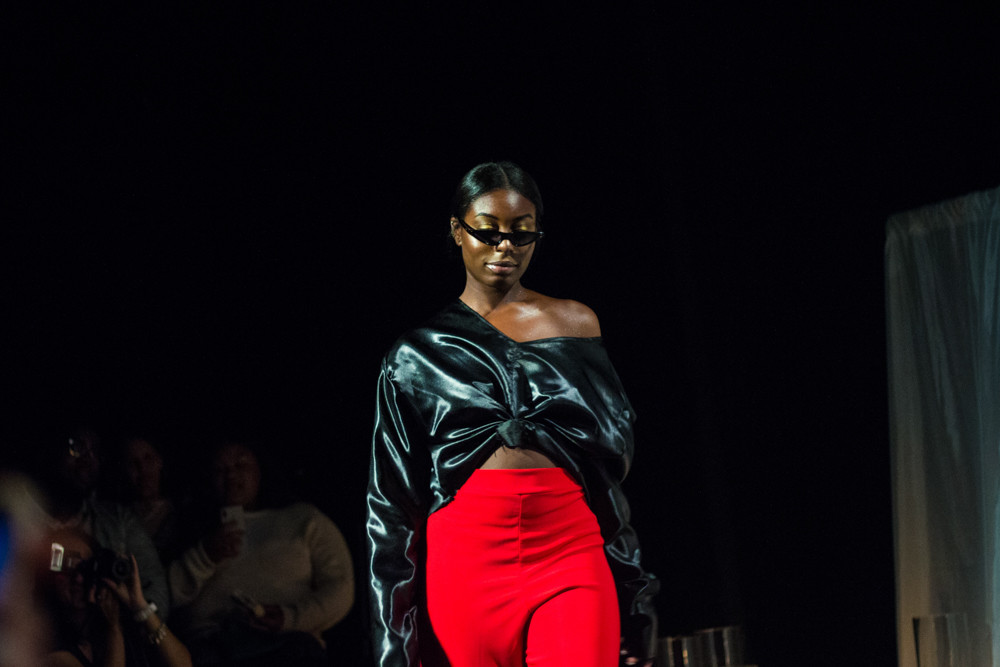 Fashion model Vanessa Rawls works the catwalk at The Point for Edwin Reyes’ third fashion show Sept. 14. The show not only highlighted Puerto Rican culture but also raised funds for relief efforts on the island.
AARON MAYORGA
Previous Next
By SIMONE JOHNSON

This isn’t Edwin Reyes’ first time around the runway, but doing it for charity? That’s new.

An independent designer from the South Bronx, Reyes used a recent fashion show to raise awareness and money for Puerto Rico.

“I always love giving back,” Reyes said. “So to tribute a show like this, especially in the month that it happened and it’s New York Fashion Week, it’s nice to do a show on Puerto Rico.”

His Hunts Point show, A Trip to Puerto Rico, featured 18 designs from Reyes’ 2018 fall and winter collection through his Bronx-based brand, Finezt by Edwin Reyes.

“This is going to be my third (show), and this is the largest one,” Reyes said. “I like going big for every show and popping off each show and doing something different.”

Reyes’ first event was small and included just 10 pieces, but it was really successful, the designer said.

Unlike the bigger-label designers who have a team of people putting such shows together, independent designers like Reyes find themselves spending up to five months planning the logistics. That includes designing, selecting the number of pieces, finding a location, sending invites, advertising and setup. It’s the details that count, Reyes has learned, especially when he operates what is essentially a team of one.

But when his designs make their way down the runway, it would be impossible for anyone to see that stress — especially since his clothes are geared to relieve it.

It was no accident Reyes chose The Point on Garrison Avenue to serve as the venue of his fashion show.

“I knew they had a black-out theater and I wanted to take advantage of that,” Reyes said. “It’s also in my community, too, and it’s also very handy.”

Coincidentally, Isabel Figueroa — one of the founders of the nonprofit Siempre Contigo that Reyes was working in to raise money for Puerto Rico — is also the center’s youth program manager.

Siempre Contigo provides direct aid to individuals and families devastated by Hurricane Maria. Reyes likes what the group does because he says they’re transparent, as opposed to other groups where some have found problems over where money ended up, like for Haitian earthquake victims.

“Even now, people try to make it seem that Puerto Rico is doing good, but there is still a lot of people who are in need of certain things,” Reyes said. “Food, water, feminine products and baby food, and things like that.”

Part of what makes Siempre Contigo unique is how it caters specifically to the needs of those who need the group’s help. While Siempre Contigo provides general needs like food and water, it also goes that extra mile to gather knowledge on what families explicitly require.

“All of the care packages go straight to the post office to the door because I want to show people where their money went to as well,” Reyes said. “I didn’t want to just donate to a random organization. I’m partnering up with them because they have an actual list of families out in Puerto Rico.”

Figueroa can only describe what’s happening in Puerto Rico in the wake of Hurricane Maria as a deliberate decimation of the island’s people. Between the U.S. government’s response time and the recent correction of death toll counts from 64 to almost 3,000 — paired with the president’s recent dismissal of those numbers — it’s hard to take it any other way, she said.

Since its inception last year, Siempre Contigo — or “always with you” in English —  has helped more than 200 people. Figueroa hopes to put together more trips to Puerto Rico in the future, allowing Siempre Contigo to continue providing direct aid.

It’s about helping people, but at the same time, it’s about introducing more and more people to his fashion line, Reyes said. There’s no reason he can’t do both.

“All the pieces are very one-of-a-kind, and you won’t really see that same garment again,” Reyes said. “I just want people to know what Puerto Rico has been going through so that we can get together and … show people what Puerto Rican culture is.”