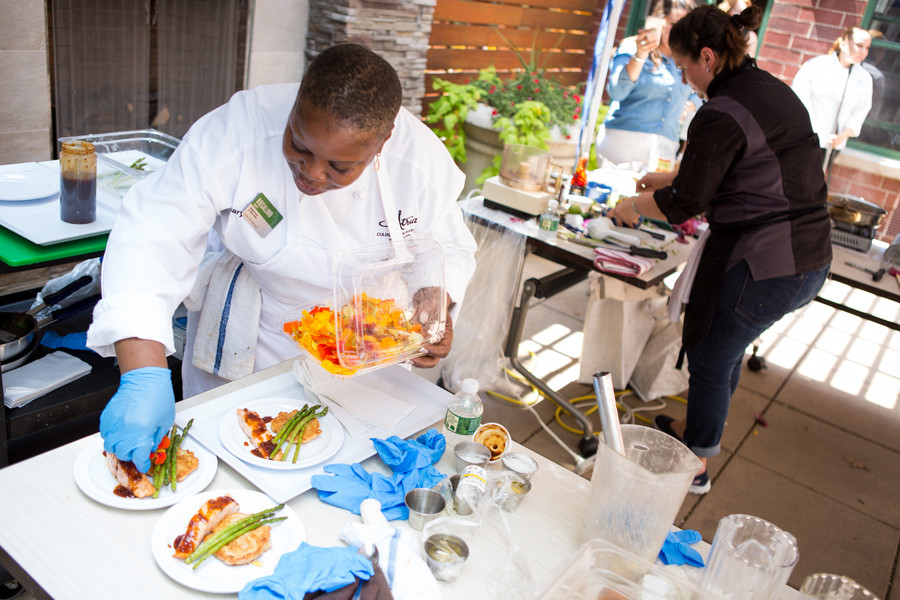 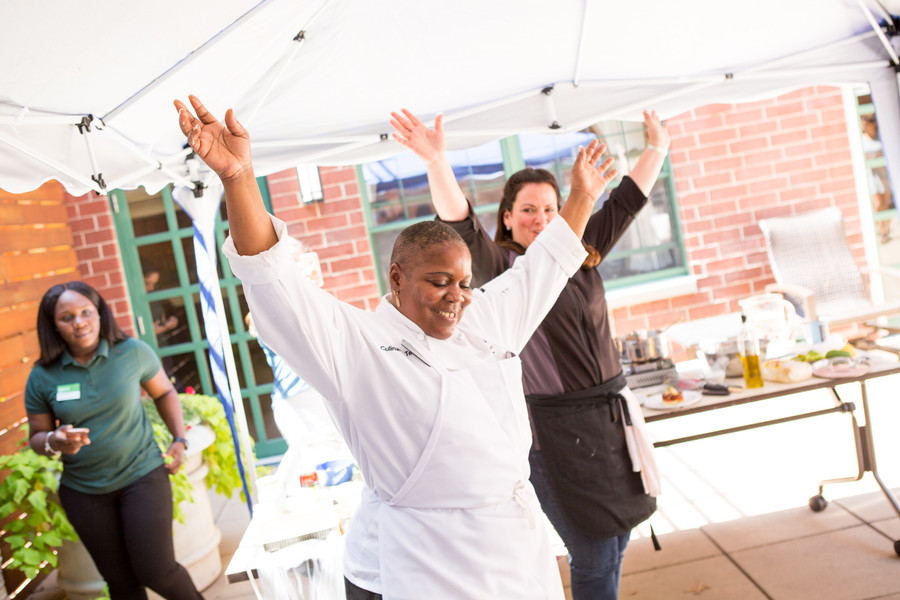 The chefs hold up their hands to show that they have finished cooking. Each made corn fritters and added her own unique twist.
Julius Constantine Motal 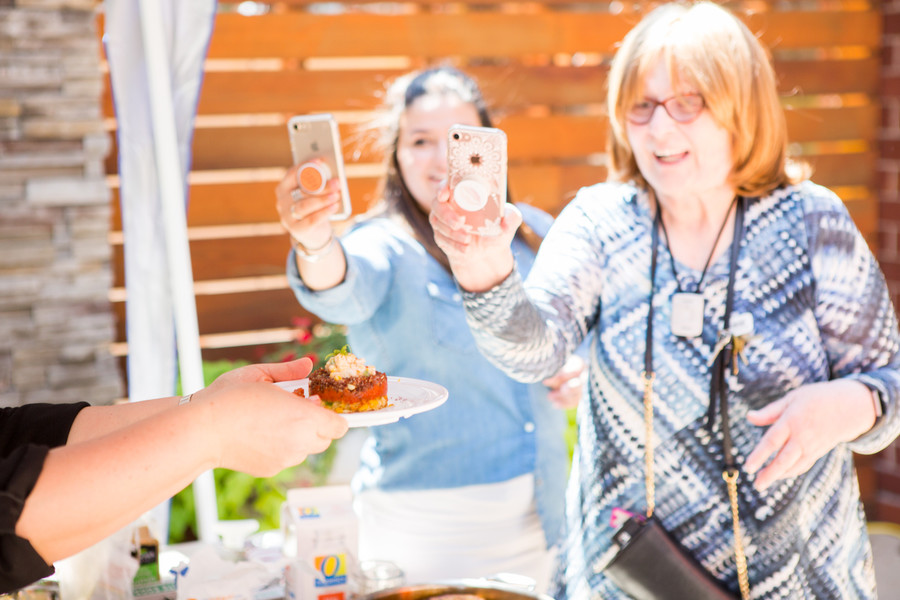 Rachel Berger holds up her dish as her daughter Nicole and mother take a picture.
Julius Constantine Motal 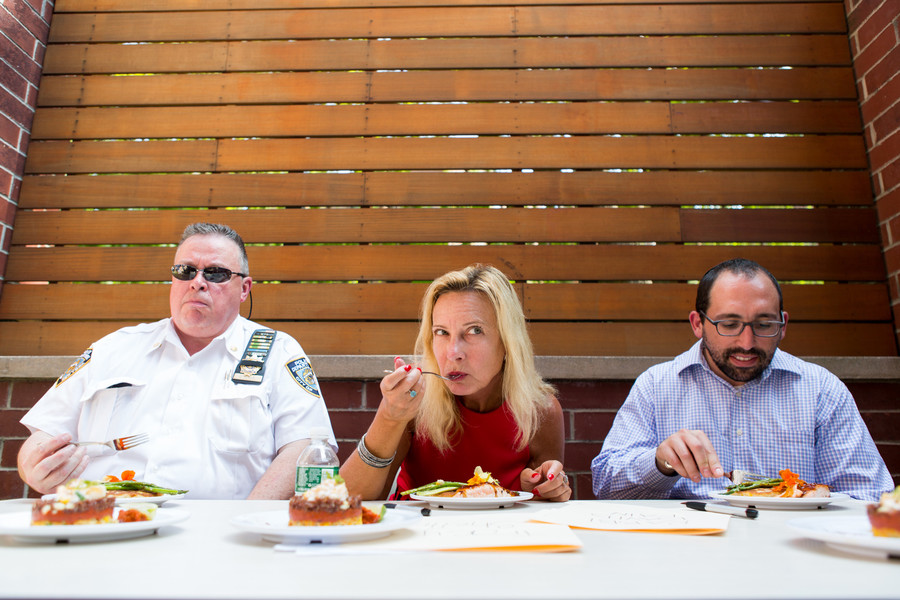 The heat was on last Thursday, and it wasn’t just because it was a hot and scorching day.

The challenge? Make a tasty, creative and eye-pleasing dish with corn as an ingredient. In 30 minutes.

Because of the 98-degree heat, most residents watched from inside where there was plenty of air-conditioning while the contest itself took place outside under a tent on Atria’s patio. Lori Cavuoti, Atria’s culinary specialist, served as the master of ceremony and announced the play-by-play as Berger and Craft made their dishes.

“I thought it was great fun,” said Atria resident Arleen Wahrman. “I’m sorry the weather didn’t help. This is extraordinary. This was something so different for us at Atria. I think it was a great idea.”

“It’s really difficult because we’re here and they’re there,” said another resident, Natalie Eigenfeld, who watched the festivities through a large window next to the patio. “We really didn’t get a sense of what the cooks were doing. However, it was a question of the weather, and I’m sure that made a difference. I couldn’t tell who was going to win because I felt that we did not participate enough.”

Residents Helen Zimmer and Carla Ryan braved the heat and watched the contest from outdoors. Zimmer joked that when winter comes, everyone would regret not being able to go outside. Ryan added that indoors or outdoors, the Chef Showdown is a must-attend event.

For Berger and Craft, the cooking competition was the first time for both. They each made corn fritters with their own unique twist.

Berger seasoned hers with jalapeño peppers and scallions. Then, she topped it with a quinoa salad made with corn, adding a roasted red pepper and sun-dried tomato sauce. Next, Berger made a corn and mango salsa with a splash of lime and coconut for a tropical flavor.

“I’ve done a lot of demonstrations, but I’ve never done it under pressure, under the time constraint,” said Berger, who also writes a food column for Jewish Link. “So, it was a nice challenge.”

Craft looked to her past for culinary inspiration. A teriyaki-glazed salmon and asparagus accompanied her corn fritter. The addition of the salmon was Craft’s nod to her mother, who made the fish frequently while she was growing up.

During the cooking process, Craft accidentally knocked over a pan of asparagus as it cooked. She quickly recovered and made a second pan, still completing her dish before the 30 minutes was up.

Berger won the day — just barely — and the Atria Riverdale, located at 3728-3726 Henry Hudson Parkway, will add her creation to its menu.

“I tried to do something original and something that they might not have been used to seeing or eating,” Berger said. “I’m excited that they were happy to eat it and appreciate the different ingredients in there.”

“I liked both dishes,” Fain said. “I think the originality in Rachel’s dish was quite unique – the way she was able to layer the foods and flavors.”

“The most meaningful part to me is that this is a community event,” said Rena Hyman, Atria’s executive director.

“That we are all coming together, people who are involved in all sorts of areas in the community, from the synagogue, to the NYPD, to the nonprofits, to the seniors, to the mothers, to some in the community that run cooking classes.