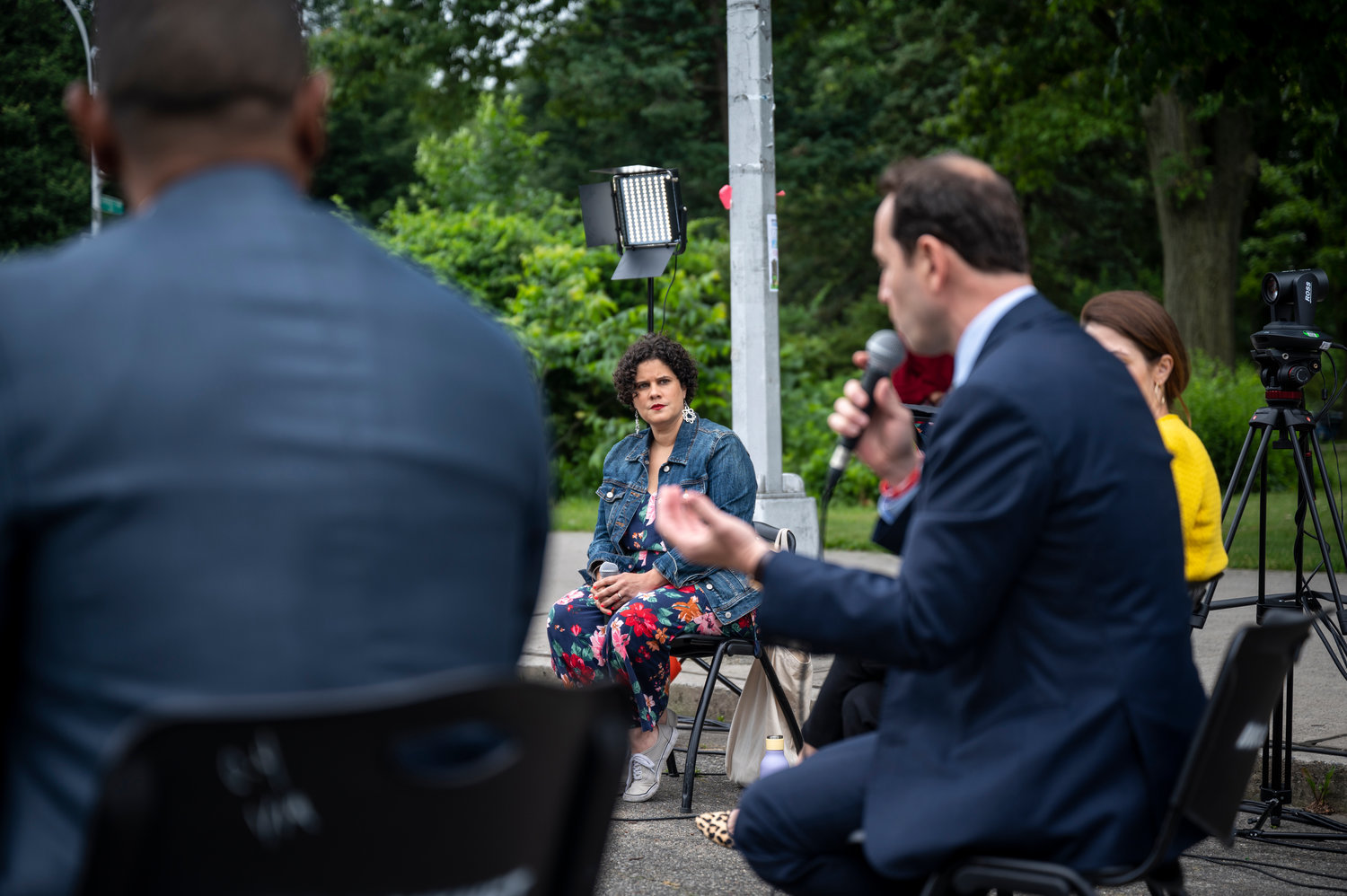 Mino Lora, center, shown during a past debate at forum hosted by The Riverdale Press and BronxNet, is excited the city has decided to spend $15 million to help her organization build a cultural center and theater in Inwood.
HIRAM ALEJANDRO DURÃN/File 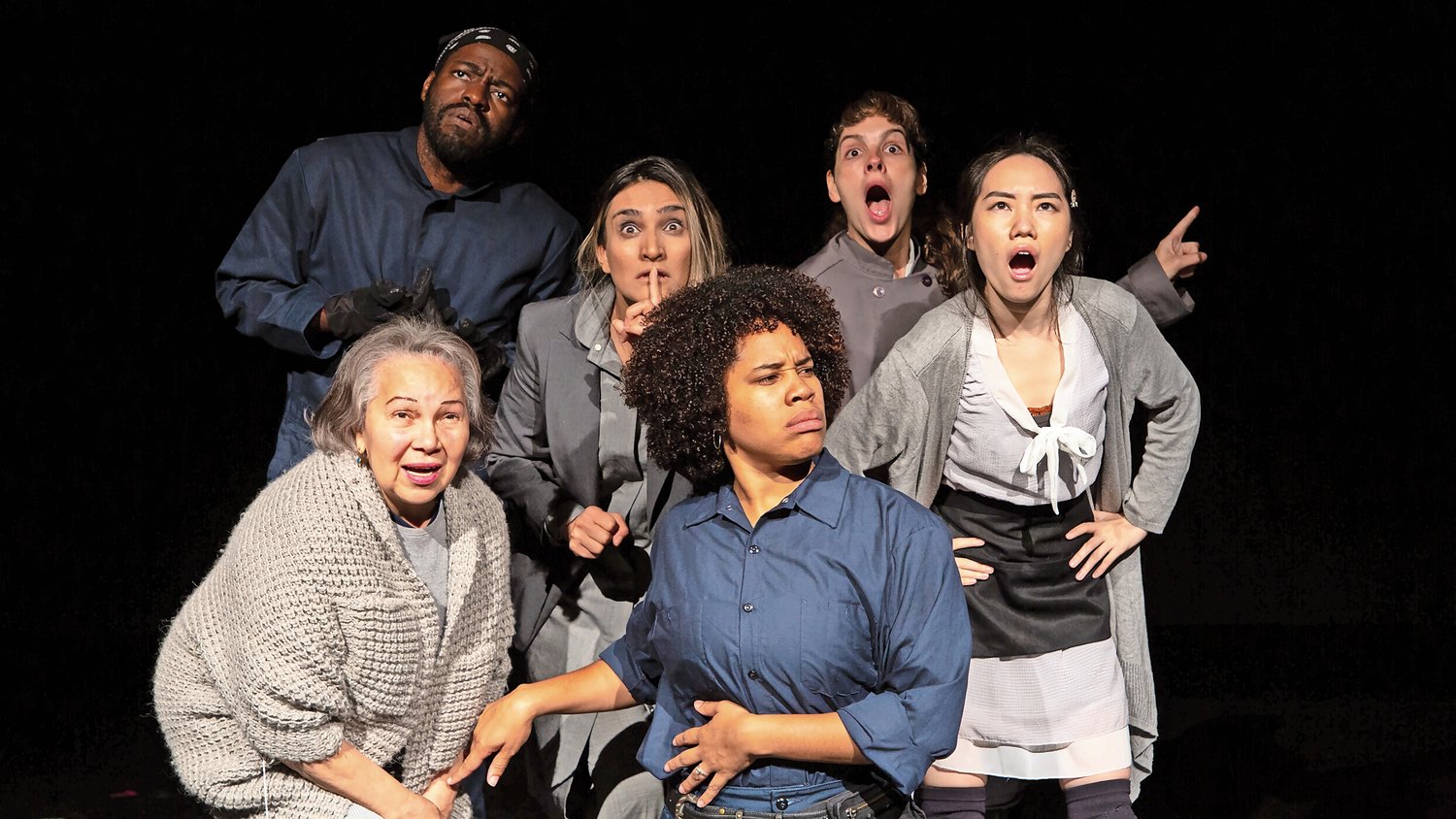 A cast from the People’s Theatre Project put on ‘Somos Más,’ in which six immigrants unite to take on a dystopian nation. A new Immigrant Research and Performing Arts Center located just across the Spuyten Duyvil Creek in Inwood, is expected to play host to a number of community events centered around the immigrant experience.
Courtesy of Emmanuel Abreu/People’s Theatre Project
Previous Next
STAFF REPORT

Big changes are coming to the People’s Theatre Project, said to be Manhattan’s largest performing arts organization north of Harlem. And Spuyten Duyvil’s Mino Lora — who founded the theatre group — is quite grateful.

City officials selected her non-profit to run a first-of-its-kind performing arts center in Inwood expected to cater to the community’s diverse immigrant community.

“It will connect, inspire, and activate generations of immigrants and their allies. Today’s announcement is an exciting moment for New York City, with an opportunity to build a community-rooted and anti-oppressive cultural institution from the ground up.”

Lora is no stranger to headlines, especially locally after unsuccessfully running for a city council seat last year ultimately won by Councilman Eric Dinowitz. She finished second twice in a crowded field in both a special election and a later primary, taking hits over claims she supported various political candidates in exchange for backing of such a theatre space. Lora denied that, saying she never had that kind of leverage with voters in that part of Manhattan to even support such an exchange.

But the space itself was indeed real, with Mayor Eric Adams committing $15 million in city funds to construct a 17,000-square-foot cultural center that would include a mid-size theater, a smaller performance space, rehearsal studios, soundproof practice rooms, and a gallery space.

It will be located in a new mixed-income, mixed-use building at 407 W. 206th St. While the community will ultimately have a say in what the new center will be called, for now, it’s known as the Immigrant Research and Performing Arts Center.

The center is expected to play host to a variety of musical and dance performances, film screenings and other community events. It’s planned to offer weekly cultural events for senior citizens, subsidized theater and studio space rentals for local performing artists, and arts exhibits by and about local and immigrant visual artists.

The performing arts center will also be the new home of the People’s Theatre Project Academy, a program combining theatre and social justice leadership courses tailored specifically for young immigrants — all free of charge.

In addition to all that, People’s Theatre Project will team up with the New York Public Library to provide research and literature exploring the historical intersection of immigrants and the performing arts.

For more than a decade, the Inwood-based People’s Theatre Project has created what it calls a more just and equitable world by creating theatrical performances by and for immigrant communities. Some of its productions include “Mariposas,” focusing on the journey of immigrants mothers and their children, as well as “Somos Más,” a story about immigrants who spark a revolution in a world where assimilation is required.

The New York City Economic Development Corp. and the city’s cultural affairs department selected People’s Theatre Project to own and operate the performing arts center on behalf of the city.

“New Yorkers deserve a city that is more inclusive and more prosperous after the pandemic than it was before,” Adams said, in a release. “We are building that city every day. Part of that is creating opportunities for all our young people to see themselves in our arts and culture, and this project will provide a new generation of young, immigrant New Yorkers with that invaluable experience.”

The announcement also caught the eye of Luis Miranda Jr., the father of “Hamilton” writer Lin-Manuel Miranda, who lives in Washington Heights.

“The Miranda family is excited that People’s Theatre Project has been named the owner and operator of Inwood’s first performing arts and cultural center,” he said, in a release. “For too long, our artists of Northern Manhattan of all disciplines have needed local space to create, display and perform their work. We are proud to support (People’s Theatre Project) as they build this home for our immigrant artist community.”

Construction of the new center is expected to begin this year. Doors should open sometime in 2027.

“Providing spaces for Latino voices is vital in our ability to recognize the diversity of our communities and celebrate our contributions to make them stronger,” U.S. Rep. Adriano Espaillat said, in a release. “I look forward to projects that will be developed through this collaboration with our community that will inspire generations of BIPOC and immigrant New Yorkers for years to come.”