Congressman’s focused on rebuilding his district stricken by the pandemic 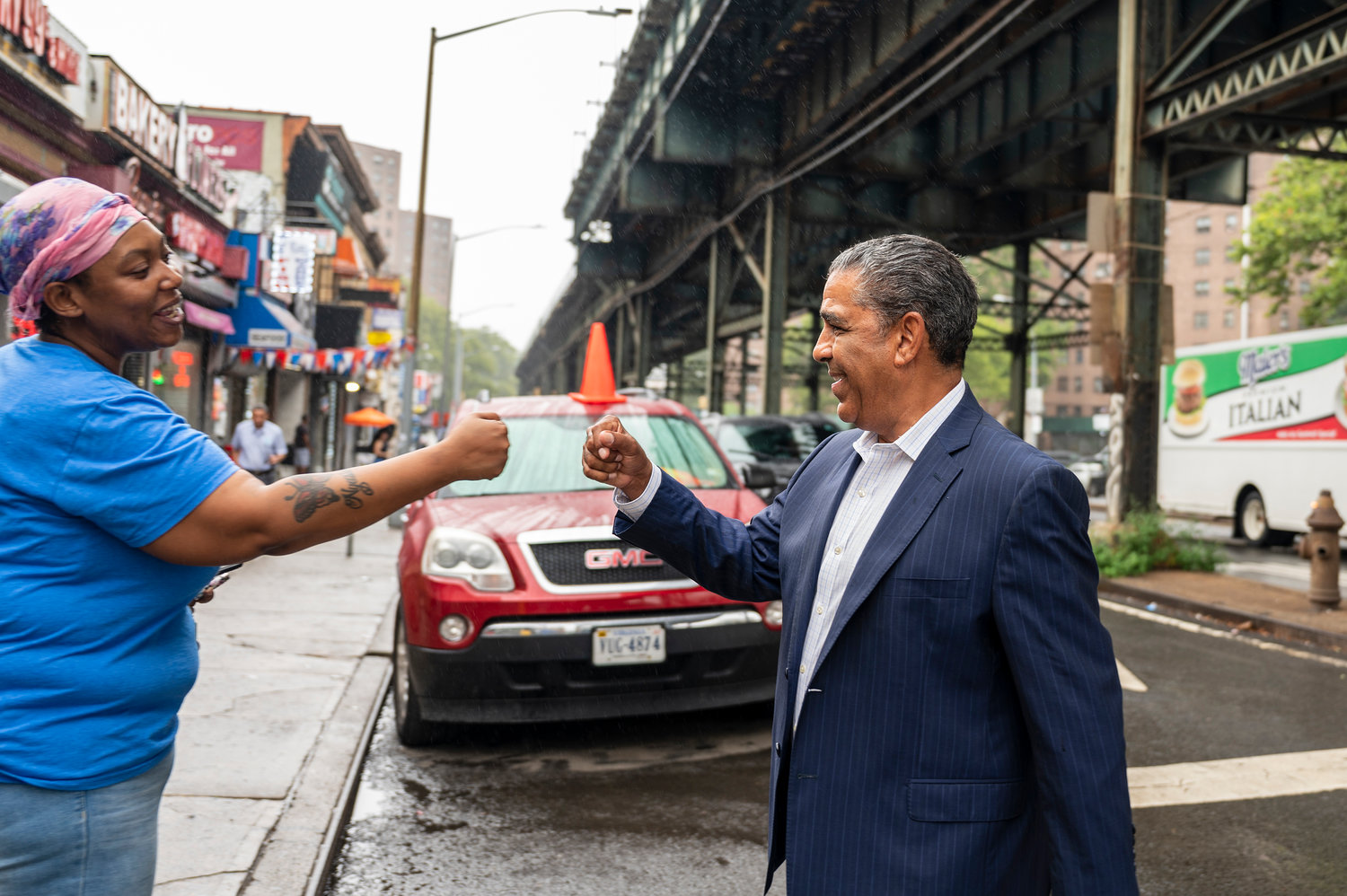 U.S. Rep. Adriano Espaillat visits with some of his constituents in Marble Hill last week, as he campaigns to make yet another return trip to Washington.
Hiram Alejandro Durán
By Sachi McClendon

Adriano Espaillat has served as the congressman for upper Manhattan and parts of the northwestern Bronx for the past six years. In that time, he has sponsored several bills to reform the nation’s immigration laws, he’s helped extend the Second Avenue subway lines in East Harlem, and he has made quite a reputation for himself by bringing new, particularly Dominican, politicians into power.

Now he’s hoping voters will put their faith in him again in the Aug. 23 primary, as the first former undocumented immigrant in congress says that there’s still a lot of work left for him to do on Capitol Hill — from fighting the overturning of Roe v. Wade to clamping down on the sale of ghost guns nationwide.

But before turning his attention to Washington, the congressman said his first concern is seeing his home district fully recover from the pandemic. For him that means investing in public safety, small businesses and health care reform.

Public safety is the first crucial element to recovery, Espaillat said. To combat the increase in ghost guns — or privately assembled, unregistered firearms — the congressman introduced legislation to close a loophole that allows those who purchase the weapons to avoid federal background checks.

“Locally, I’ve been working with the mayor in getting more police into the district,” he said. “I also funded initiatives with the violence interrupter groups that are credible messengers in our community.”

Reducing crime will also help strengthen the district’s small business economy, which the congressman said is still just trying to get back on its feet. “Many (small businesses) are still hurting now,” he said. “During the pandemic many of them were closed, or foot traffic was kind of low at their respective businesses. And now trying to stay open is really where they are facing challenges.”

Then there’s health care: “How do we reinvent our health care systems so we address the disparities that showed up during the pandemic?” he said.

Nationally, Espaillat said he’s working on ways to push back against the U.S. Supreme Court decision to overturn Roe v. Wade. “I think the Biden administration has been very strong. New York state has led the way in making sure that women know that this is a sanctuary state,” he said. “Now as a national issue, I’m more concerned that the court, which is a right-leaning court, will now be trying to go and assault other major rights and privileges,” like same sex marriage or other legal contraceptives.

In fact, Espaillat sponsored a resolution condemning the Supreme Court’s decision, and further committing the government to advancing reproductive justice and judicial reform. He added that he’s looking into ways the legislative branch could strip the high court of its jurisdiction in certain civil-rights matters.

Even before his time in congress, Espaillat gained a reputation for his propensity to prop up fellow Dominicans candidates as well as other politicians from historically underrepresented communities.

The congressman buoyed both council members Oswald Feliz and Pierina Sanchez to victory in their recent races. In the state senate, he backed Cordell Cleare in last year’s district 30 special election. Then back in 2017 he supported Diana Ayala, who is now the deputy speaker of the city council.

“So this is a very broad and diverse coalition of conscience,” Espaillat said, made up of politicians who, “want to empower new voices that are qualified, are honest, and will provide a new vision for the city.”

At times, that has backfired, as at least a few of the politicians who rose to power with Espaillat’s backing have left office in disgrace. There was Nelson Castro, Espaillat’s former chief of staff, who left the Assembly in a cloud of scandal after getting wrapped up in a widely publicized corruption case.

Then before Castro, there was Miguel Martinez — a former protégé of Espaillat — who resigned from city council in 2009 after pleading guilty to stealing tens of thousands of taxpayer dollars. Martinez and Espaillat did have a falling out a few years prior to that ordeal, however.

Those bad apples are why Michael Hano, one of Espaillat’s challengers, got into the race in the first place. “For me it was important to get on the ballot as a candidate, just so I have a better platform to make people aware of what’s really going on. Because the more research I’ve done, the more I was just shocked,” Hano said. “I see him as the root of the problem. And that’s why I’m running against him.”

In response, Espaillat said, “There are dozens of other people that I’ve supported that I think are great leaders, and I’m disappointed that he doesn’t take that into consideration.”

Nevertheless, the congressman said he welcomes the challenge from Hano. “I’m glad that he’s in the race,” Espaillat said. “I wish him the best and that he brings fresh new ideas to the debate.”

Besides, as the incumbent, Espaillat — with his many friends in local and state government and with more than $700,000 in campaign cash on hand — is the clear front runner in the race.