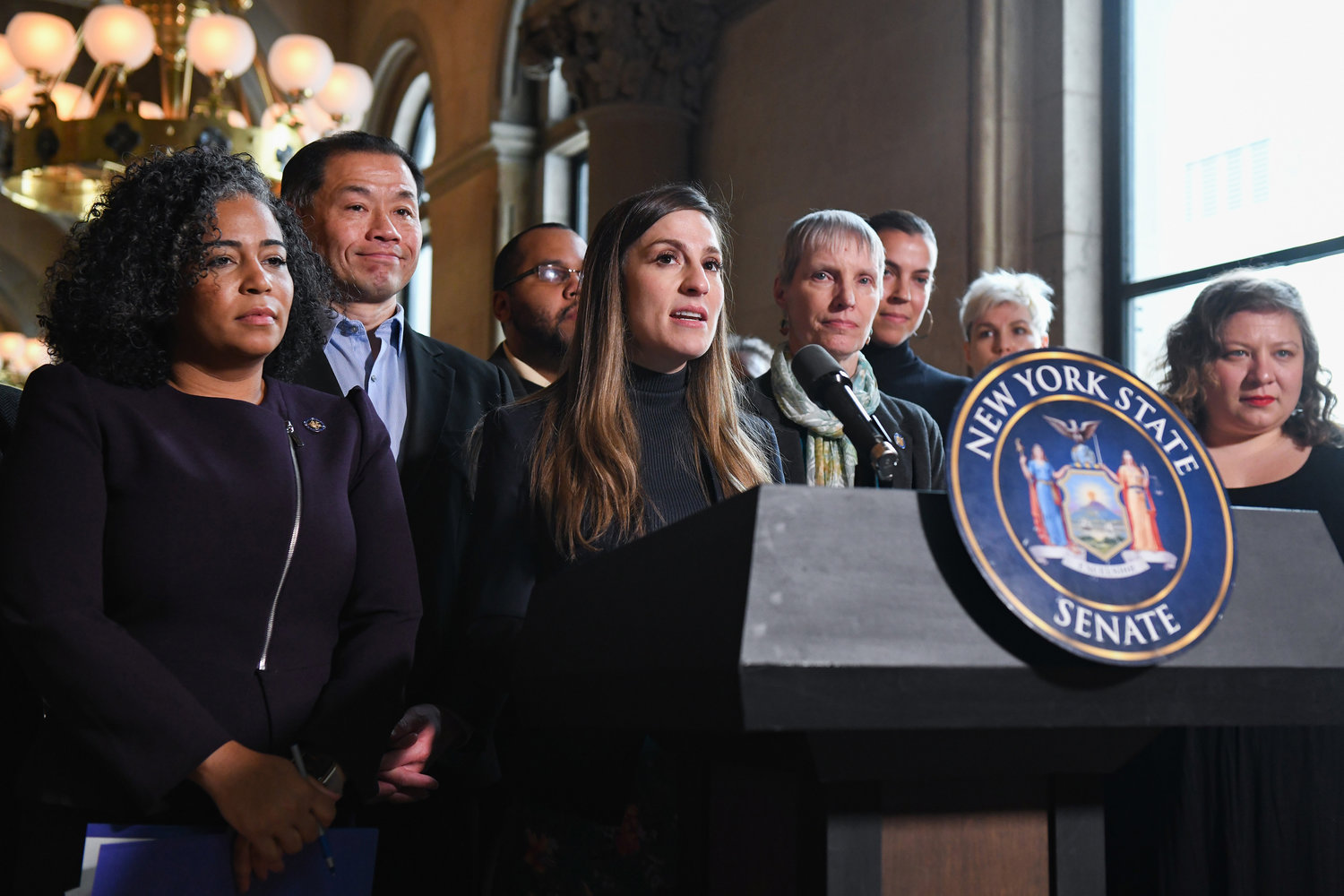 The Marijuana Regulation and Taxation Act, which provides broad legalization of marijuana, was ushered into law by state Sen. Alessandra Biaggi and a majority of her colleagues late last month. According to Biaggi, the bill aims to repair damage from the so-called ‘war on drugs’ by reinvesting in low-income communities of color.
Courtesy of NYS Senate Media Services 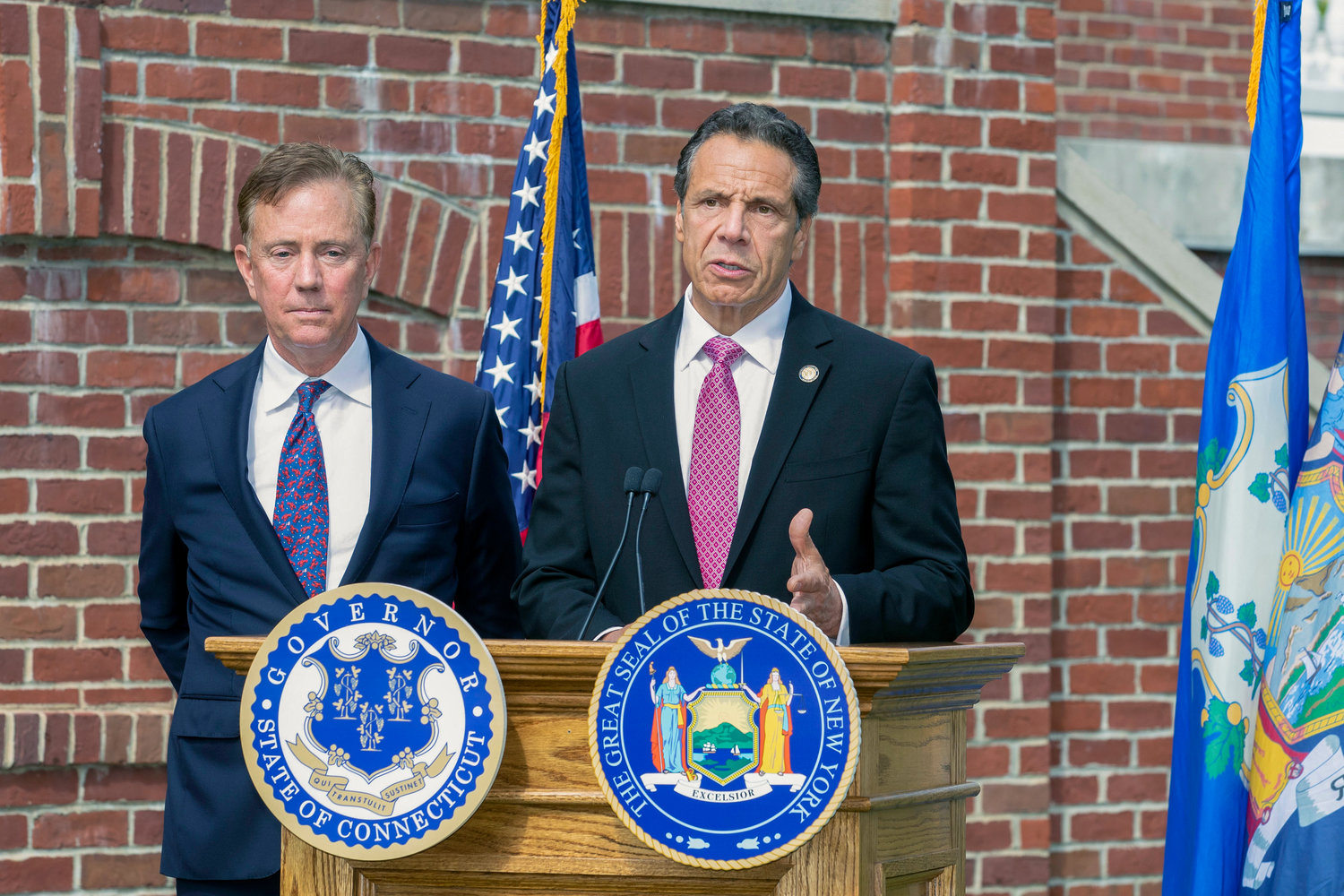 Gov. Andrew Cuomo had one bright moment during a seriously political turbulent time for him signing a bill that would broadly legalize the adult use of recreational marijuana. The final bill included directing 40 percent of tax revenue raised from marijuana sales to communities impacted by the so-called ‘war on drugs’ — a provision in the bill the governor had long disagreed with. Cuomo wanted to cap tax revenues directed to these communities to a set amount no matter how much was raised.
Courtesy of Mike Groll/ Office of Gov. Andrew Cuomo 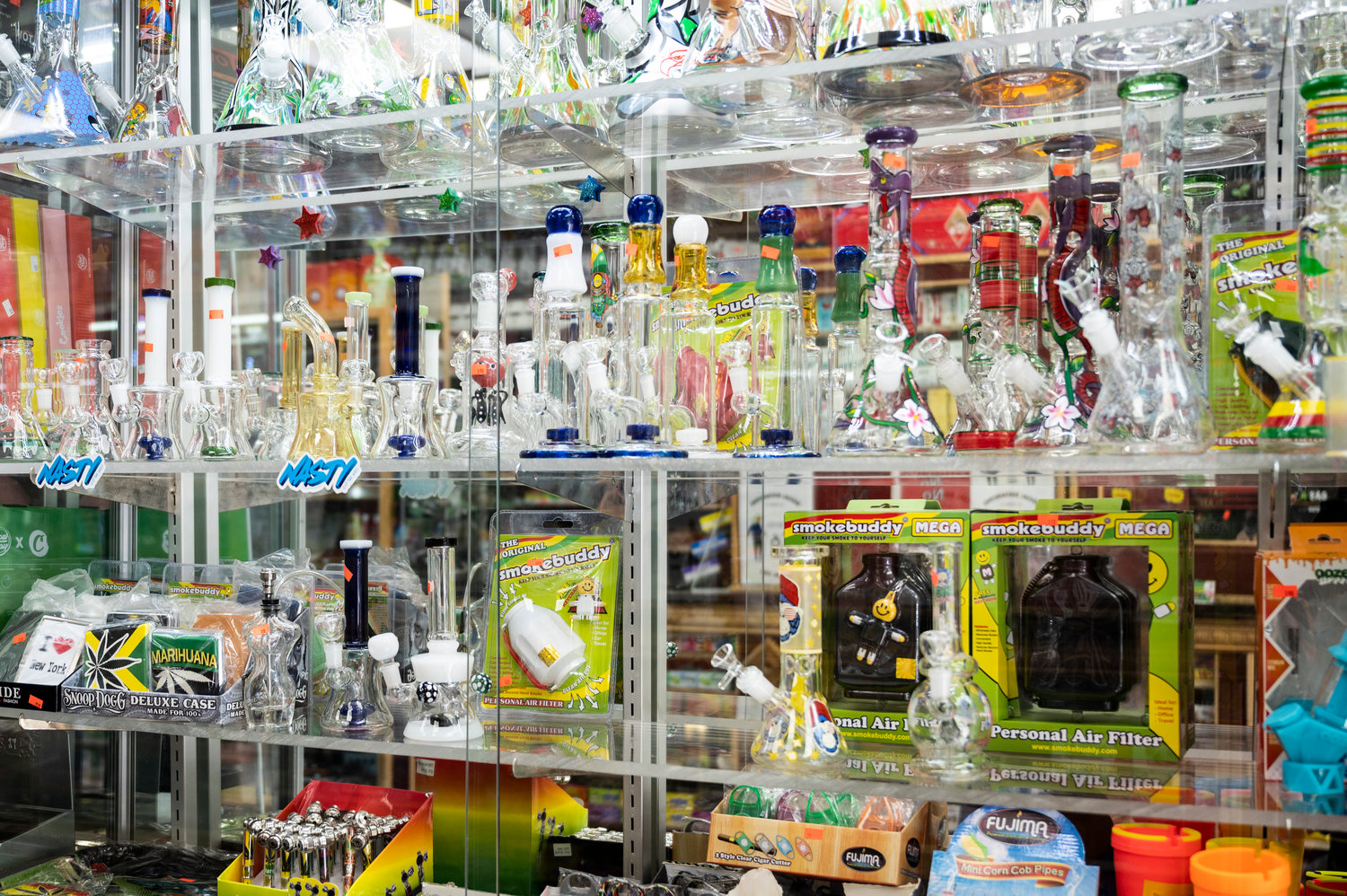 Last week, New York made it legal to carry up to three ounces of marijuana and to smoke in public. The same law also aims to right the wrongs of the so-called ‘war on drugs’ by reserving 50 percent of industry licenses for people from communities affected by past marijuana arrests.
HIRAM ALEJANDRO DURÁN 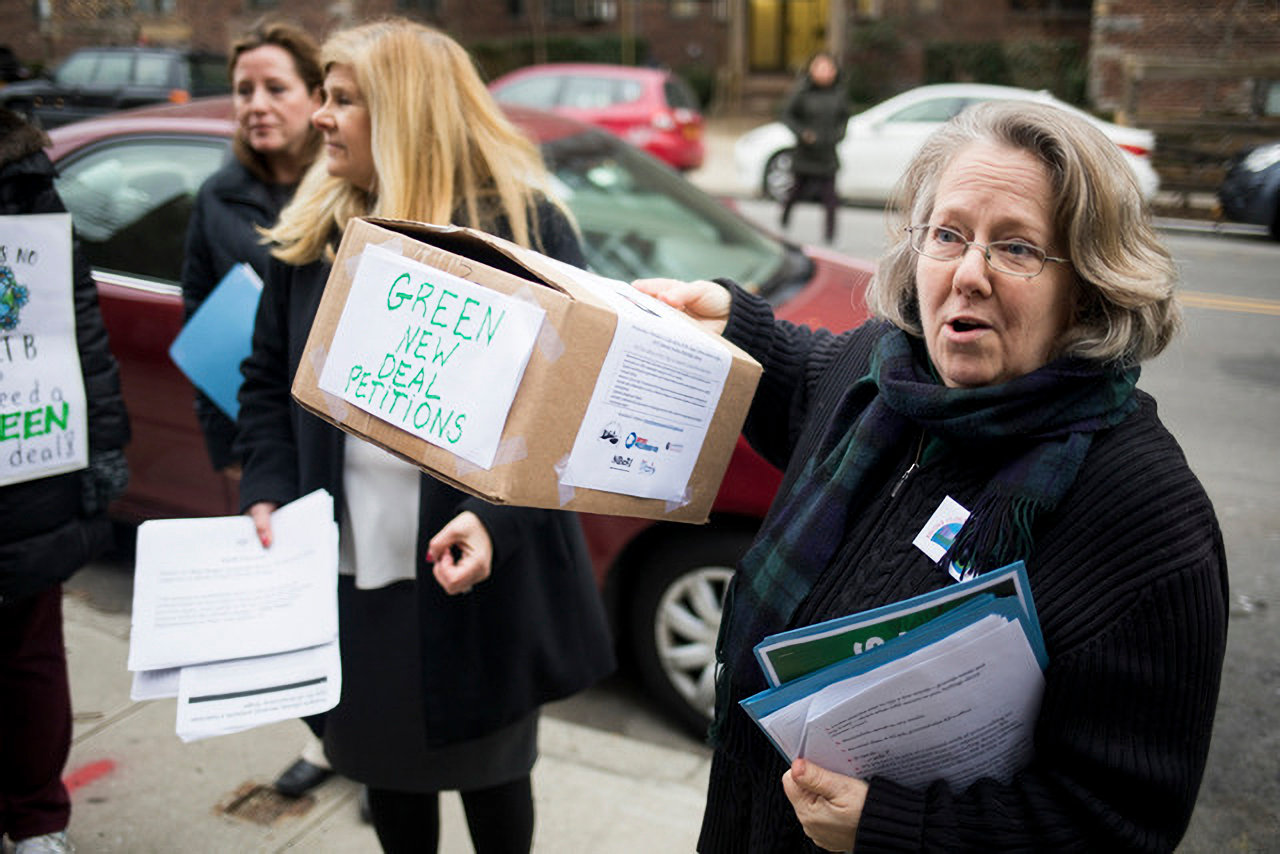 Jennifer Scarlott, founder of North Bronx Racial Justice, says her organization is very pleased with New York’s legalization of the adult use of recreational marijuana. Scarlott says the law will provide justice for those unfairly targeted by police forces around the state in marijuana arrests.
JULIUS CONSTANTINE MOTAL/ File
Previous Next
By ETHAN STARK-MILLER

Gov. Andrew Cuomo signed the Marijuana Regulation and Taxation Act into law last week, making many forms of recreational adult use of marijuana legal across the state.

Effective immediately, anyone older than 21 in New York can legally carry up to three ounces of marijuana and even smoke it in public, although many restrictions on where that’s permitted already are in place. For instance, smoking it in schools or while driving a car remains illegal.

Marijuana enthusiasts may be celebrating their newfound freedom to smoke a joint on the street, yet the bigger win, according to proponents of the law, is that it greatly advances racial justice.

Legalization was necessary, they said, because people of color in lower income neighborhoods have been disproportionately targeted in marijuana-related arrests for decades. Jennifer Scarlott — the founding member of North Bronx Racial Justice — said the fact this bill finally became law is a major accomplishment after languishing for many years.

“This was a fight, not just for legalization for the sake of legalization, but really a fight for marijuana justice,” Scarlott said. “Justice for all of those who have been targeted and racially profiled by the NYPD and by police forces around the state.”

Passing a law like this, according to state Sen. Alessandra Biaggi, is a meaningful step toward correcting the harm drug enforcement has done to these communities.

“For decades, New York’s existing marijuana laws have failed to protect the welfare of our Black and Latinx communities,” Biaggi, a co-sponsor of the bill, said in a statement to The Riverdale Press. “I always believed the MRTA was the best path to legalize marijuana because of its consistent and long-term investments in the communities most harmed by marijuana prohibition.”

One recent published report claimed people of color made up 94 percent of marijuana-related arrests last year, according to data provided by the New York Police Department. Additionally, a 2018 report from city comptroller Scott Stringer showed the Bronx has bore the brunt of those arrests — especially in the neighborhoods of Highbridge and Concourse. And the Manhattan neighborhood of Marble Hill more locally.

“A number of the neighborhoods that were most targeted for marijuana enforcement are out here in the Bronx,” said Eli Northrup, a policy lawyer for The Bronx Defenders, a public defender non-profit that helps low-income Bronx residents. “We represent people every day who are affected by marijuana convictions. Even if marijuana policing has gone down in a certain sense, people who have convictions are affected in family court and immigration courts. Bronx residents have felt the effects for many years.”

Passing this bill, first and foremost, means the end of this unequal policing over marijuana, Northrup said. This particular bill stands out because of its provisions calling to reinvest in communities most impacted by the so-called “war on drugs.”

That means allowing people in these communities the chance to get in on the ground floor of what’s expected to be the state’s burgeoning marijuana industry. The legislation sets a goal of reserving half of the industry licenses for what lawmakers are calling “social equity applicants.” This means low-income people who can prove they, or some close relative, were targeted by a marijuana-related arrest in the past.

“Making sure that people in the same communities — people who have been affected by the war on drugs and over-policed — have a chance to participate in this new marijuana economy is going to be really important,” Northrup said. “It’s written into the bill, and now we need to make sure that that happens. That those people get the licenses. That big corporations don’t come in and take it over.”

Organizations can take advantage of the new law, Biaggi said, as long as they have a plan that would ultimately benefit those negatively impacted by marijuana arrests in the past.

The bill also provides for education, grants and incubator programs that are intended to help those wishing to join the industry find their footing. However, it will be at least a year before the commercial marijuana industry will be allowed to take off, Northrup said. The state first has to set up the Cannabis Control Board, tasked with regulating the state’s newest industry.

When the commercial side is up and running, 40 cents on every dollar of state tax revenue is supposed to be earmarked for communities most affected by past drug prohibitions. In practice, Biaggi said, this means the money will go to community-based organizations that provide a number of social services including job training, housing and mental health treatment.

How much of the tax revenue should be diverted was a key point of contention between lawmakers and Cuomo, according to reports — a battle that has lasted at least the last couple years.

Cuomo wanted to cap diverted revenue at $50 million by 2026, while the state legislature wanted these affected communities to get half of all the tax revenue generated. The two sides ultimately settled on 40 percent.

“It is still a huge win compared to the governor’s proposal,” Biaggi said. “That was simply not enough.”

It’s not all celebration behind this bill. There are still many who argue marijuana legalization will do more harm than good.

New York State Congress of Parents and Teachers, for example, wrote an open letter to the governor before the bill was signed. The advocacy group cited a list of health and safety issues related to legalization, like the potential increase in driving under the influence of marijuana. Operating a vehicle while impaired would remain illegal.

One last benefit the law provides to those with past marijuana convictions is that because possessing and smoking it is no longer against the law, those records are set to be expunged.

It’s a law that goes further than any other state so far, Northrup said.

“I think it’s a huge victory for New York,” he said. “I think it’s the best bill in the country in terms of actually achieving marijuana justice and repairing past harm. So, I’m happy as a New Yorker. And as an advocate.”