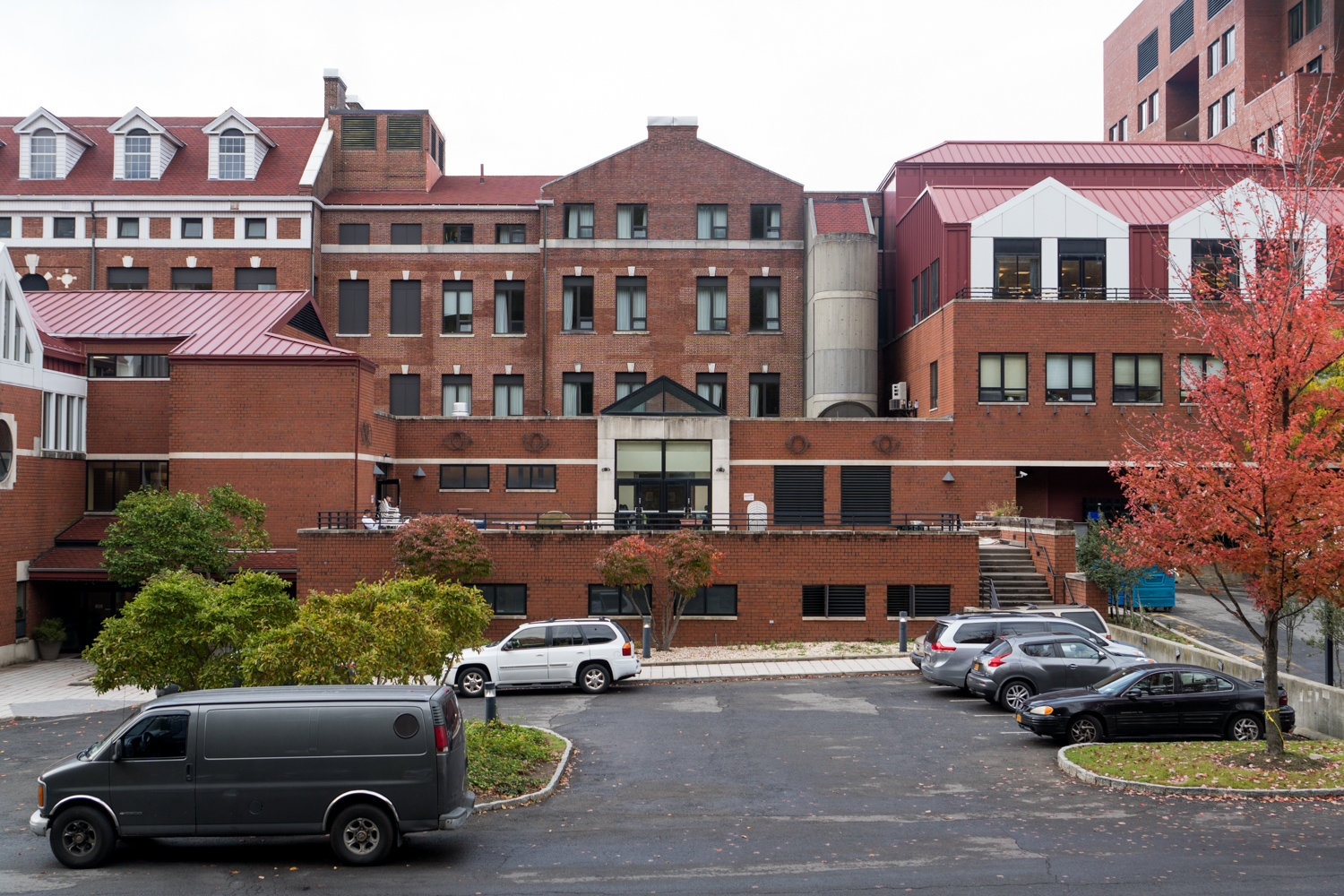 The Hebrew Home at Riverdale has updated its total number of deaths from complications related to COVID-19 to a borough-leading 63, following an investigation by the state health department.
JULIUS CONSTANTINE MOTAL / File 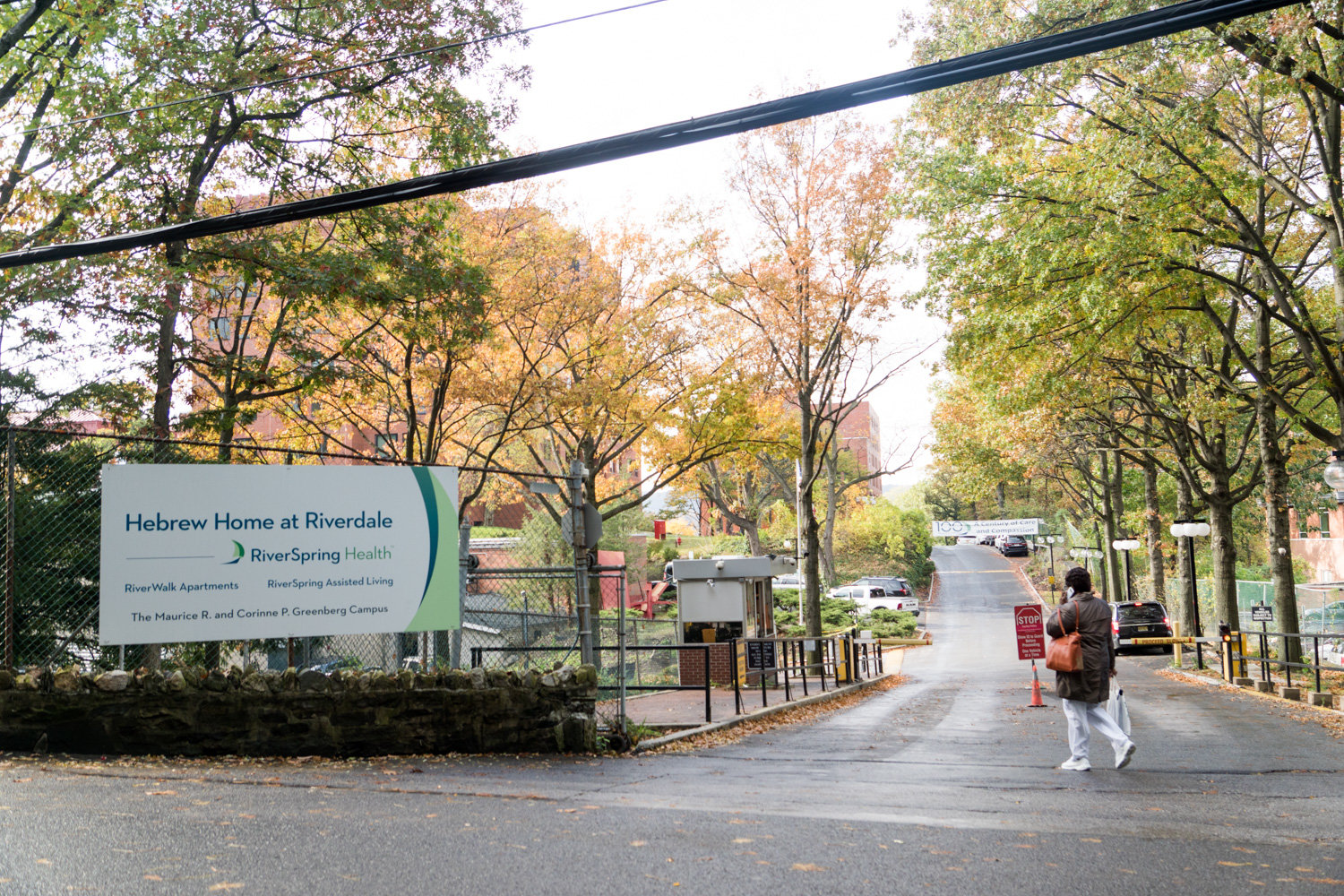 The Hebrew Home at Riverdale has revised its number of deaths related to COVID-19 from 35 to a borough-leading 63. The revised total followed an investigation of deaths by the state health department.
JULIUS CONSTANTINE MOTAL / File 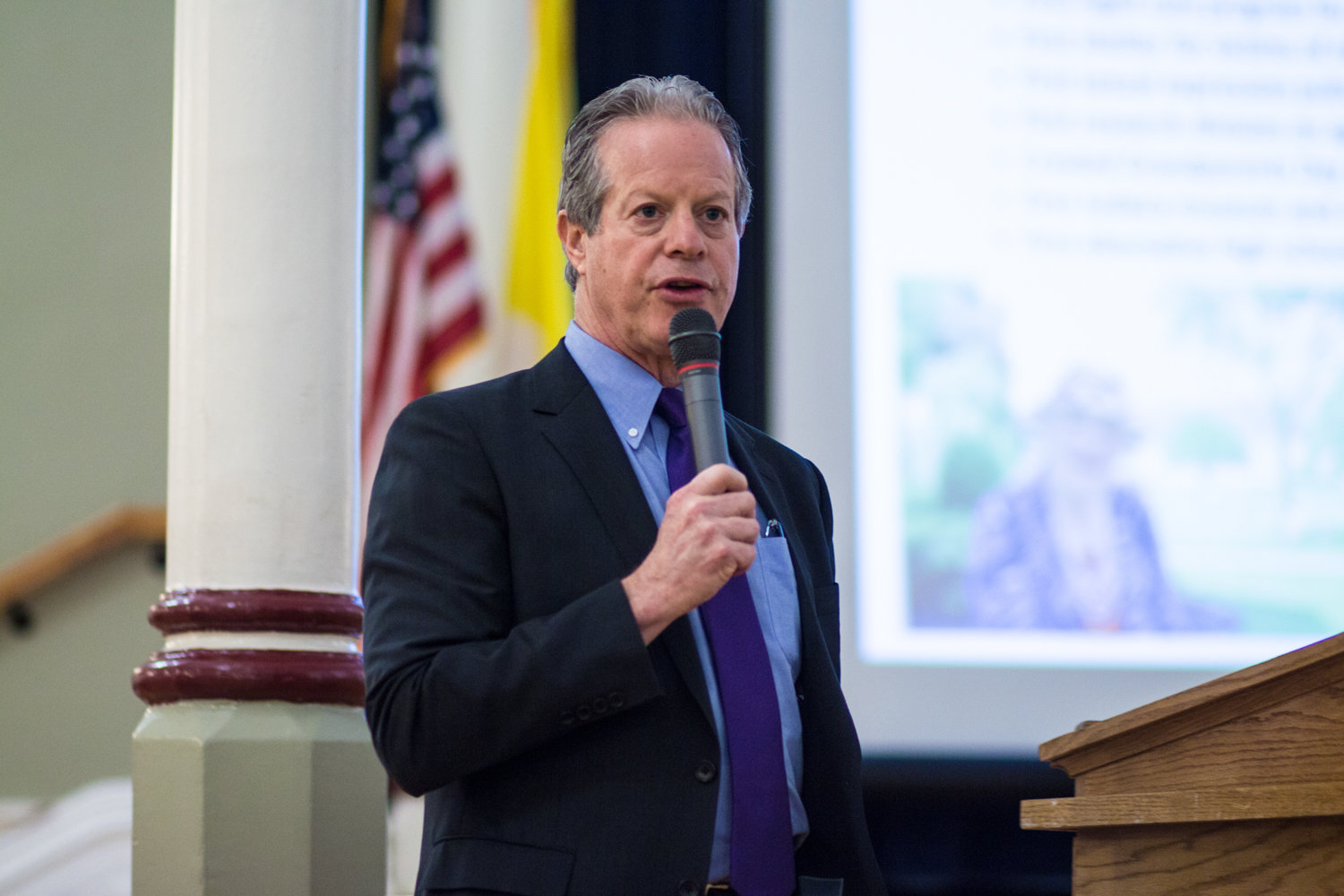 Hebrew Home at Riverdale chief executive Dan Reingold laments the lives lost to complications from the coronavirus that causes COVID-19. Following an investigation by the state health department, the nursing home has updated its COVID-related death total to a borough-leading 63.
AARON MAYORGA / File 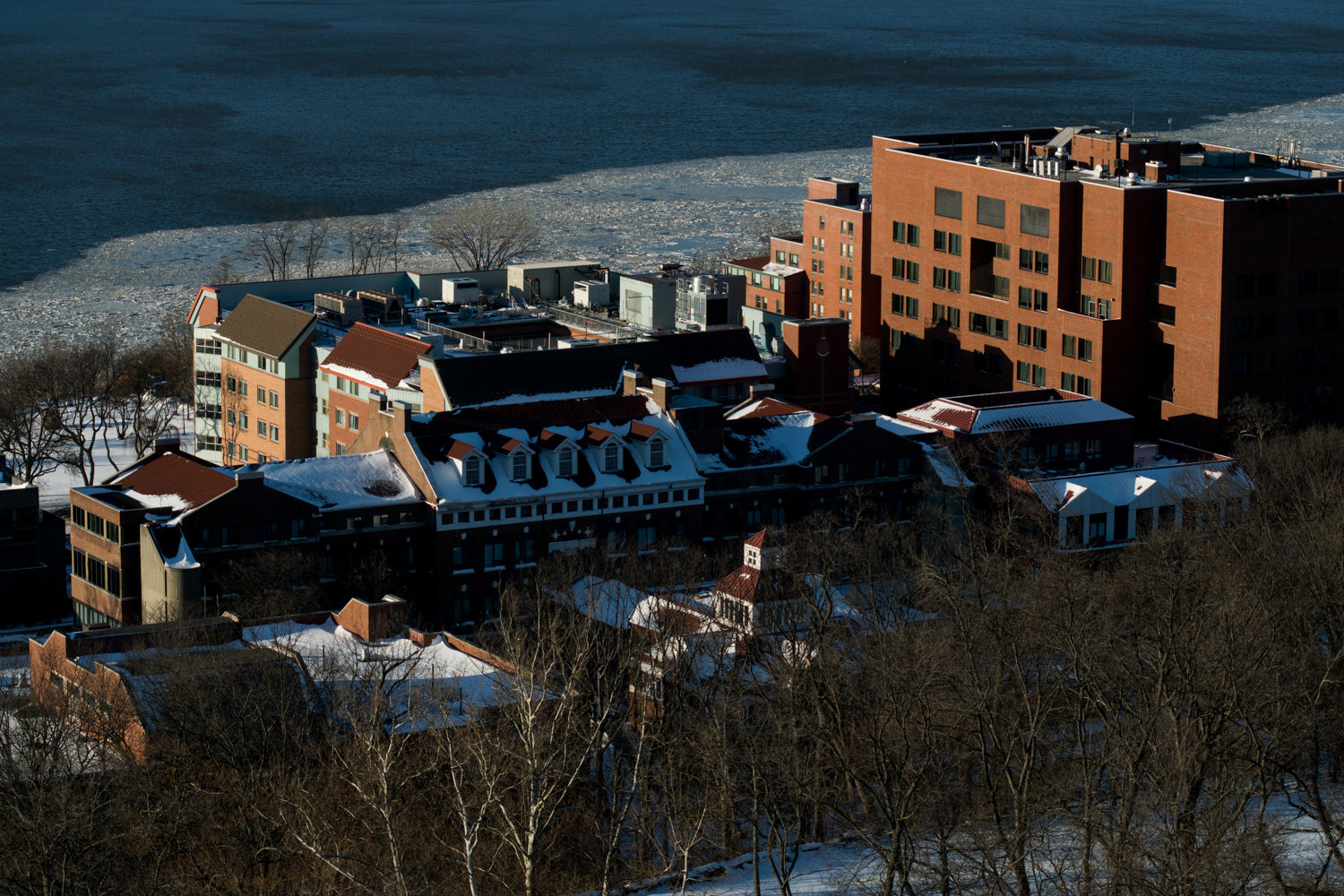 The Hebrew Home at Riverdale has revised the number of COVID-related deaths at the facility after an investigation from the state health department. Its new number, as of Monday, is 63, higher than any other facility in the borough.
JULIUS CONSTANTINE MOTAL / File 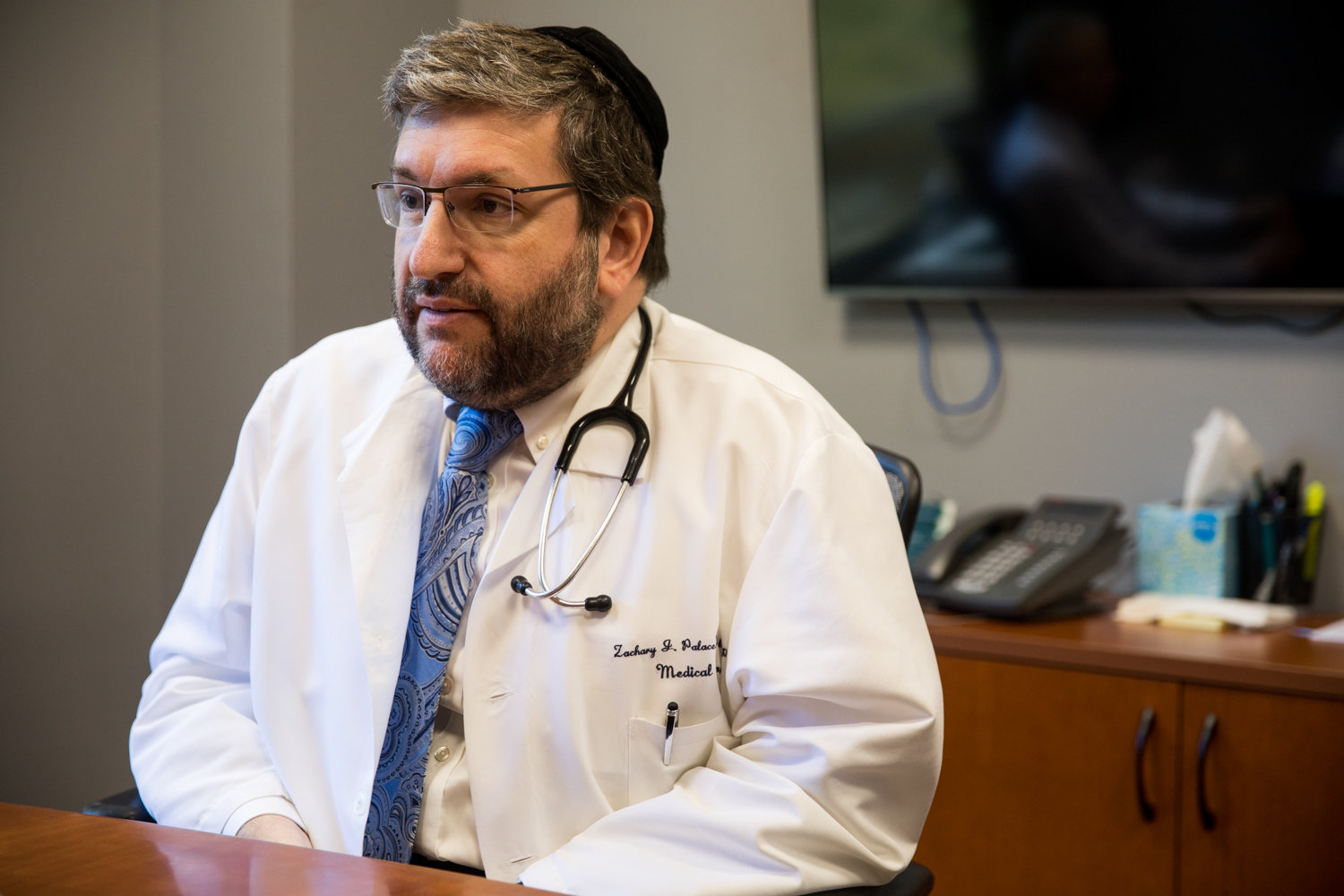 Hebrew Home at Riverdale medical director Dr. Zachary Palace is working to keep his patients and staff members healthy as the nursing home updates its death toll from complications related to COVID-19 to a borough-leading 63.
JULIUS CONSTANTINE MOTAL / File
Previous Next
By KIRSTYN BRENDLEN

Being the biggest is a great way to draw attention — just not always the attention one might want.

The Hebrew Home at Riverdale is the state’s largest non-profit nursing home with more than 750 beds. And as critics, government officials and the public as a whole keep a close watch on coronavirus data coming out of facilities like the Palisade Avenue facility, a so-called “reclassification” of more than two dozen deaths in the past 90 days has now put the Hebrew Home a hair above all other facilities in the Bronx when it comes to coronavirus deaths.

After the state’s data audit, the Hebrew Home now has 63 deaths believed to be related to the coronavirus, a tad more than the reported 61 deaths at The Plaza Rehabilitation and Nursing Center on Kingsbridge Road. Yet it’s unclear how the Hebrew Home would compare to neighboring facilities if state health officials more closely scrutinized their on-site deaths.

And state health officials are doing just that, visiting 160 nursing homes and 215 adult care facilities through the middle of the month, according to health department spokeswoman Jill Montag. Those visits include scrutiny on how coronavirus-related data is compiled and reported.

Getting a handle on the situation

Citywide, more than 3,100 people have died in nursing homes and adult care facilities since the beginning of March, including nearly 750 in the Bronx alone, as of Monday.

Before the health department showed up at the front door, the Hebrew Home reported just 35 confirmed or presumed COVID-related deaths, although a daily report released by the state shows just 18 as of Monday. But just as health officials’ understanding of the coronavirus seem to change on a daily basis, so does how state officials collect data related to the disease.

“Initially the deaths were recorded based on the physician’s clinical impression at the time of the death,” said Dr. Zachary Palace, the Hebrew Home’s medical director. “Each individual death was viewed and determined by the physician independently to determine the cause of death based on reviewing the charts.”

Over time, Palace said, the Centers for Disease Control and Prevention added more symptoms associated with COVID-19 beyond the initial three primary symptoms of fever, cough and shortness of breath. As far as the Hebrew Home was concerned — and likely many of its counterparts across the borough and city — any death that exhibited fever, cough or shortness of breath would be classified as a COVID death, whether they had been tested or not.

“Subsequently at the end of April, the CDC updated the guidelines in terms of what would be considered a diagnostic criteria for COVID,” Palace said. “So it was very important for us to look, in real time, at what the diagnostic symptoms were for COVID at the time that that patient had passed away.”

The Hebrew Home has 751 beds and 1,200 employees, including nurses, housekeeping staff, chefs and cooking staff, and administrators, according to a letter to the “Hebrew Home community” sent by nursing home chief executive Dan Reingold. State health officials’ visit to the home last week was unannounced, Montag confirmed, which is standard practice for the agency.

“We’re here on Mother’s Day giving chocolate roses to our staff and residents,” Reingold told The Riverdale Press. “I gave a rose to a woman who, when I said, ‘Do you work here?’ she said, ‘No, I’m with the New York State Department of Health.”

But health officials weren’t just focused on deaths, Reingold said. They also explored other aspects of the Hebrew Home’s coronavirus response, including the number of positive cases, suspected cases, symptoms of infected residents, and the severity of those symptoms, Montag said. Infection control procedures are also reviewed.

In the letter to families, the Hebrew Home said health officials spoke to staff members across all departments, visited every floor of the home, and examined the facility’s inventory of personal protective equipment, like gloves, masks and face shields.

Yet, the facility has not been able to do “widespread testing” since the start of the pandemic, as nurses and administrators simply didn’t have access to enough tests.

The health department “informed us that they would be testing all the residents throughout the entire facility,” Palace said. “They would get what’s called a ‘point prevalence’ survey, so they would know what the prevalence of COVID is at this point in time.”

The campus-wide tests found 64 staff members who tested positive for the virus that causes COVID — including 43 from the nursing staff — as well as positive tests for 109 residents. In his letter released to the public on Monday, Reingold said all staff members and most of the residents who tested positive were asymptomatic. While that’s good news for those who are infected, it’s bad when it comes to trying to identify the presence of the virus when there aren’t adequate tests.

Any staff member who tested positive can’t work for at least two weeks. Once that isolation period is over, they would be tested again and allowed to return only if they test negative. The current number of positive tests represents a little more than 5 percent of the Hebrew Home’s total work force.

Residents who test positive are being moved into a building separate from those who test negative, Reingold said, and rooms that had previously housed positive residents were being sanitized. There was a separate “cohort” of residents who had been exposed to COVID but tested negative — they will be quarantined and monitored for symptoms without risking further exposure.

Testing anyone
... and everyone

Staff members began state-mandated twice-weekly testing starting Wednesday, while residents are having their temperature, pulse and respiration levels measured at every shift change, and blood pressure checked every day.

“We were screening every employee that came through the gate,” Reingold said. But still, that doesn’t mean the virus can be stopped outside.

“Unfortunately, when someone is asymptomatic, you don’t know that they’re potentially carrying the virus,” he said.

“So the testing gives us the information we need to make the right decisions.”

Antibody tests used to determine if people have built potential immunity to the coronavirus were not in the Hebrew Home’s current plans, Palace said, as they have “limited clinical utility” in the nursing home. While some staff members have been tested on their own, using the tests in-house would not be helpful in infection control.

The Hebrew Home has been operating without much guidance from the state health department to this point, Reingold said, and he did not expect the agency could lay out clear guidelines.

“That is not a criticism of the department of health,” Reingold said. “One of the things that became clear to us working hand-in-hand with the department last week is that they, too, are confronting something that really no one has ever dealt with before. And New York state is confronting the epicenter.”

It has been only eight weeks or so of the state battling this new virus, he said, and much of what’s happening now simply could not have been predicted.

“My gut feeling is yes, we were on our own,” Reingold said. “But everybody was kind of on their own with this.”