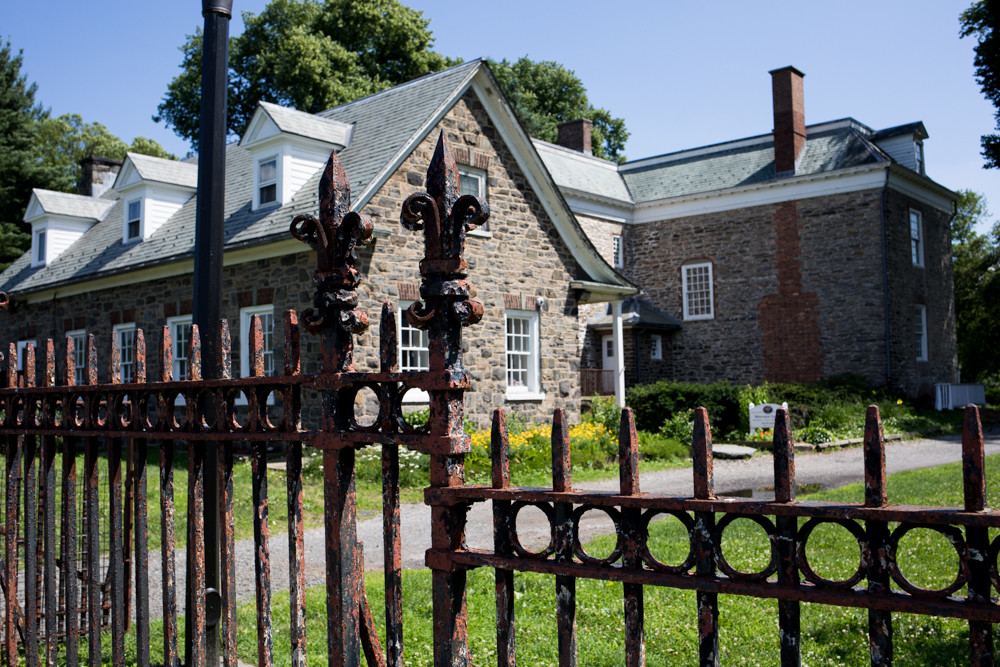 The fence surrounding the Van Cortlandt House Museum, marred by rust and chipped lead paint, screams out for repairs — something Friends of Van Cortlandt Park executive director Christina Taylor estimates could cost millions. Age, high use, staff shortages and underinvestment in basic maintenance plague parks throughout the borough, according to the Center for an Urban Future.
JULIUS CONSTANTINE MOTAL 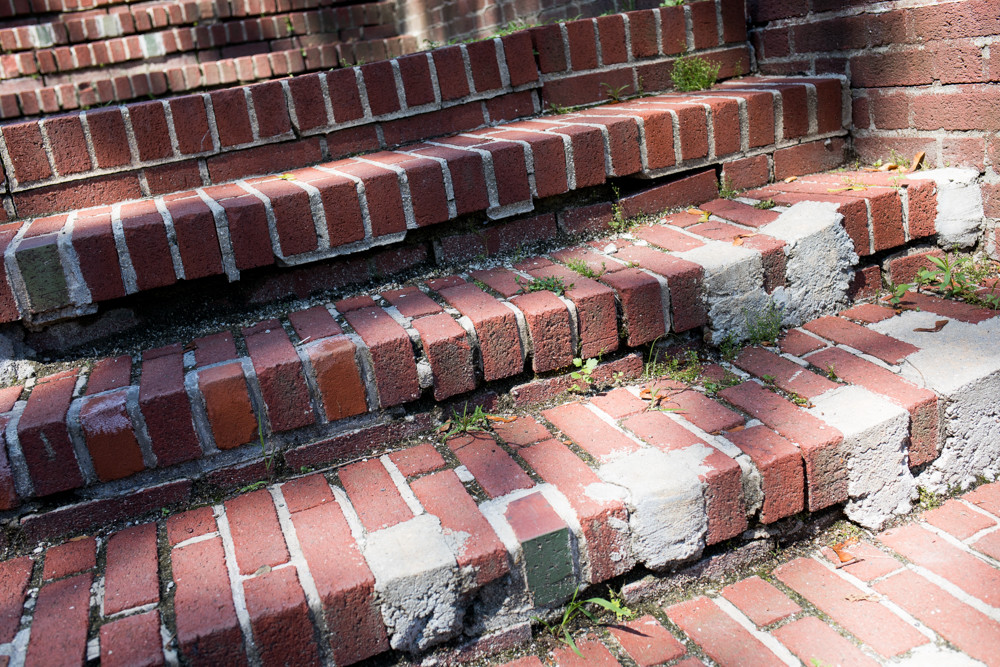 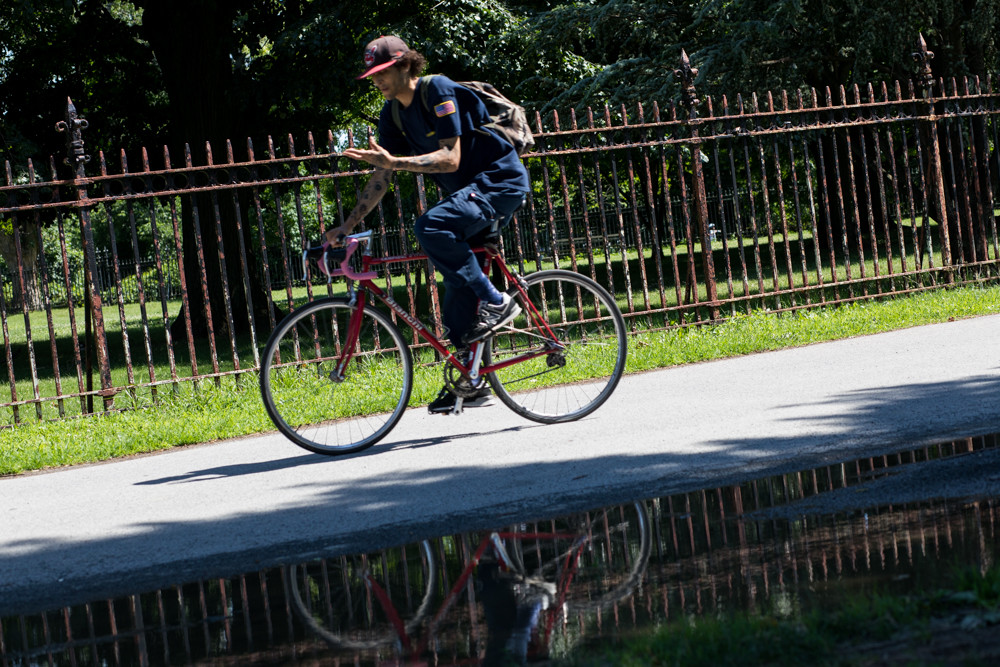 A cyclist rides along the fence surrounding the Van Cortlandt House Museum. The fence suffers from rust damage and desperately needs a paint job. But repairing it could be a multimillion-dollar project, Friends of Van Cortlandt Park executive director Christina Taylor says.
JULIUS CONSTANTINE MOTAL 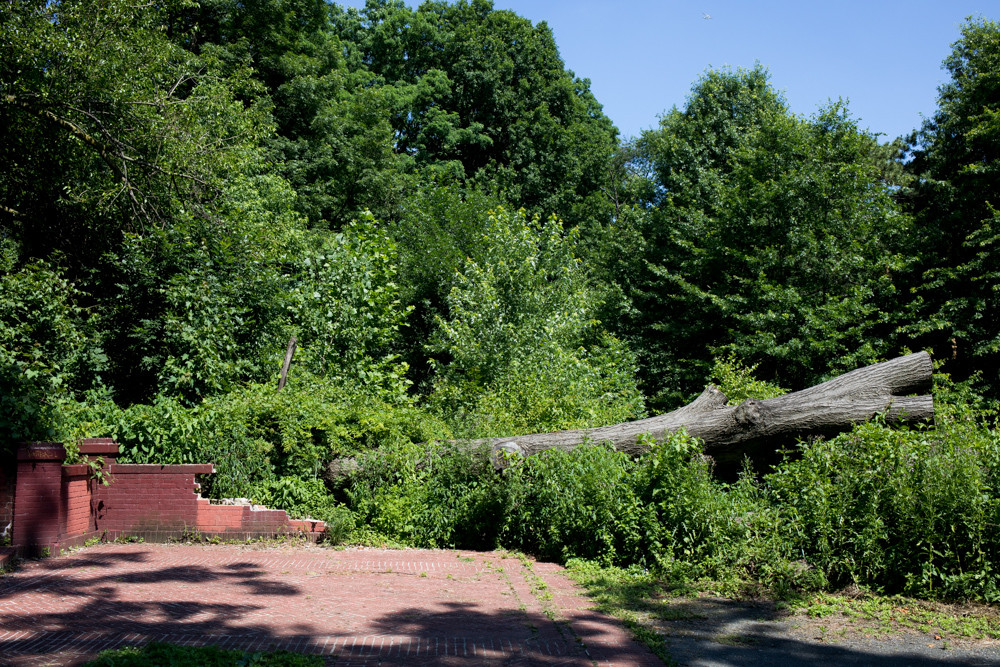 Damaged steps behind the Van Cortlandt House Museum are at least a century old, according to Friends of Van Cortlandt Park executive director Christina Taylor. A tree collapsed on the steps last year making matters worse. Too often, Taylor says, years pass before repairs take place in parks all over the borough.
JULIUS CONSTANTINE MOTAL
Previous Next
By ZAK KOSTRO

In a sprawling borough blanketed by parkland, maintaining all that green space is no small task. So it may come as no surprise that parts of Van Cortlandt Park — or smaller ones like Spuyten Duyvil’s Ewen and Shorefront — look a little rough around the edges.

In fact, a growing number of the Bronx’s nearly 300 parks covering roughly a quarter of the borough face serious infrastructure problems because of age, high use, and chronic underinvestment in basic maintenance, according to a new report from the Center for an Urban Future. While the average Bronx park is 74 years old and hasn’t received a major update in the past two decades, 71 percent of Riverdale’s parks haven’t seen significant renovations since 1993.

The borough also suffers from a shortage of skilled maintenance workers, the report claims, including plumbers, gardeners, electricians and masons. Community Board 8, for example, doesn’t have a single dedicated gardener, said Eli Dvorkin, managing editor at the nonprofit who issued the report. While there’s a shortage of gardeners systemwide, to not have one is “atypical.”

Decades in the making

But it’s not like the problem sprang up overnight.

To the contrary, it’s been decades in the making, Dvorkin said. And in the northwest Bronx, similar to the rest of the city, “the drivers of this are really that the parks system itself is old.”

The average Bronx park is even older than in Brooklyn and Queens, he added. Decades-long lack of resources and general neglect hasn’t helped.

“This has been going on at least since the ‘70s,” Dvorkin said, when, following the fiscal crisis that saw the city on the brink of bankruptcy, “parks really bore the brunt of the city’s budget cuts. And it’s kind of been that way every time there’s a lean period. Parks really take it on the chin, and it’s true in the northwest Bronx in particular.”

Yet, the depth and scope of the problem may not be obvious to the average Riverdale or Fieldston resident taking a stroll through Vannie.

“It doesn’t necessarily mean that parks, to the eye, are in rough shape,” Dvorkin said. “Some of them certainly are, and you see things that are pretty evident, like flooding” or cracked pathways.

But it’s the “unsexy infrastructure” that often gets overlooked, Dvorkin said, in part because it’s not visible, like drainage systems — most of which still rely on clay pipes laid out in the mid-20th century — and retaining walls, some of them close to a century old.

Still, “these are systems that are critical for the health and vitality of parks,” Dvorkin said.

Yet, the administration is trying, according to parks officials, having invested in strengthening the city’s parks system “from top to bottom,” including capital programs like a $318 million, 65-park initiative focusing on immediate upgrades in parks with the greatest needs, and a $150 million project bringing “the first structural improvements in generations” to both playgrounds and flagship parks.

Looking ahead, officials predict, a newly funded catch basin program, as well as regularly assessing capital needs, will ensure all parks’ issues are accounted for and addressed.

“The whole way in which the parks department is structured just makes no sense,” said Bob Bender, CB8’s parks and recreation committee chair. “The capital budget for the parks department every year is zero,” or at least very small compared to some other city agencies, meaning projects often depend on elected officials funding them.

“It always makes a great photo-op for a legislator to be standing in front of a new playground with little kids all around,” Bender said.

But repairing 70-year-old, non-functioning drainage pipes? “That’s not the sort of thing that makes for a great photo-op, and it seldom gets funding.”

Earlier this summer, sprinklers in a Van Cortlandt Park playground had to be shut off because drains were clogged, Bender said. Fortunately, plumbers fixed them relatively promptly. But too often that’s not the case.

Last year, for example, drains also were clogged at the Bailey Playground on West 234th Street until, “finally, the parks department got around to it.”

“They operate in crisis mode,” Bender said. “When there’s a backup and the drains aren’t performing and the local councilperson or community board or some advocacy group raises hell, then it gets attention.”

“This happens almost every single summer,” Bender said. “Either the equipment is inadequate or the people maintaining it are insufficient. Basic maintenance is the single biggest problem we have in the parks.”

“We’ve been asking for years for an increase in parks budget, and we haven’t really received one,” said Taylor, who also was an advisor for the Urban Future study. “Every year we have to fight just to keep the status quo.”

Taylor listed a slate of issues afflicting Vannie, from a desperately needed paint job of the Van Cortlandt House Museum’s fence, to crumbling steps behind the museum, to bathrooms at the Parade Ground field that break down regularly from high use.

Still, things could be much worse.

The issue isn’t so different than the city’s public transit troubles, Dvorkin said.

“We all have a visceral sense of what it means when New York City underinvests” in the necessary maintenance “to keep a critical piece of urban infrastructure in good shape,” Dvorkin said.

“The result is a transit crisis that continues to grow. Parks aren’t quite there yet, but what we’re seeing are that the cracks are showing.”