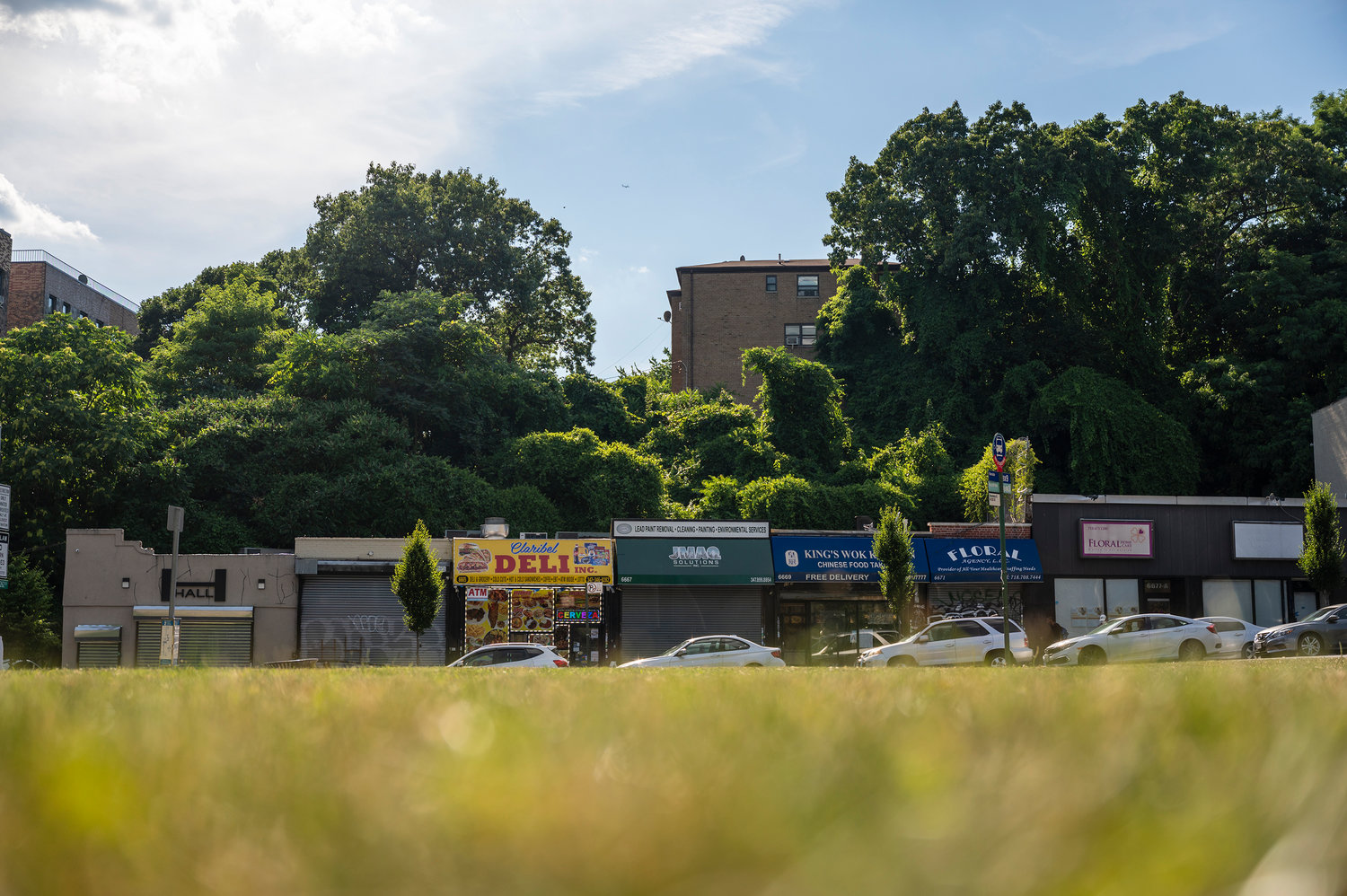 Ruby Dong is the same age as her family’s restaurant, New King’s Wok Kitchen, located at 6669 Broadway. Her parents bought the business in February 1998 and welcomed their daughter later that year.

They’d like to keep serving up Riverdale’s spicy Szechuan, but New King’s Wok is looking to relocate now. Along with other businesses at the site of the proposed shelter, they received notice they will need to vacate by the end of the year—a sign the owner is preparing for a demolition of the property.

“My parents built this business from the ground up in their early twenties,” Dong said mournfully. “It means a lot to us.”

Assemblyman Jeffrey Dinowitz, an ardent opponent of the proposed shelter, wanted to know: “Why are the businesses being told they’re evicted before there’s a deal? Is there a deal? Is the fix in? I don’t know, but it seems like an awfully risky proposition for somebody to purchase property for millions of dollars unless they know that they can proceed with their plans.”

The Assemblyman, along with city Councilman Eric Dinowitz and CB8 Chair Laura Spalter, penned a letter to the city department of investigations last week asking for a probe into the property. On Monday, Spalter said DOI had replied confirming receipt.

Since early last year, city social services officials have quietly tried to root out nepotism and conflicts of interest within one of the city’s largest nonprofit operators of homeless shelters — African American Planning Commission Inc. — even as the homeless services department procured and ushered through a review of a new proposal for a 130-bed shelter facility in North Riverdale.

“We made a commitment to opening 90 new shelters that have high quality providers such as the AAPCI, who is here with us tonight,” social services deputy commissioner Erin Drinkwater told attendees at a Community Board 8 committee meeting last October.

While the agency representatives answered questions about the proposed facility and presented its development timeline to the community, AAPCI still failed to produce the required transformation plan the city had asked for behind the scenes.

The city’s contract services office said they haven’t yet received the contract for review.

AAPCI did not return The Riverdale Press’ requests for comment, nor did the proposed developer for the five-story shelter, Court Square Real Estate Partners.

Social services officials requested information about AAPCI’s contractors and the makeup of their board in February 2021 after it came to the agency’s attention that founder and chief executive Matthew Okebiyi had appointed his brother, Raymond Okebiyi, as the organization’s chief financial officer. After reviewing the provider’s records, the city pursued a reform plan. Raymond Okebiyi needed to step down, they said, and the organization’s five-person board needed to be restructured.

Neha Sharma, a social services department spokesperson, said when issues arise with providers, the agency tries to work closely with them to investigate and resolve the concerns without impacting services to New York residents. But in AAPCI’s case, the city continued to attempt to resolve issues while also deciding to pursue the provider’s new proposal for a shelter contract in North Riverdale.

“It is essential to distinguish between a specific potentially problematic relationship among select executive staff and the work of the organization as a whole, which every day tries to do the right thing, provide services and programs to those in need, and help families get back on their feet,” Sharma said in an email to The Press, “which is why we have robust mechanisms in place to help identify and resolve issues in a collaborative manner.”

New shelter sites are selected by nonprofit operators and accepted on a rolling basis through proposals the city receives through their open-ended request for proposal process.

“The department of homeless services evaluates proposals submitted by not-for-profit service providers for use of specific locations as shelter to DHS,” not the other way around, Sharma said.

Though AAPCI remained intransigent on the city’s requests for a transition plan, social services officials proceeded with their rollout of the proposed facility and faced off against blowback, which new shelters are often met with.

Earlier this year, AAPCI produced the required transition plan, which social services says it “intends to monitor closely and enforce.”

Raymond Okebiyi was terminated on April 1, according to the city’s social services department.

The organization agreed to changes in the makeup of their board. Raymond Okebiyi’s wife will remain, but will now serve as an unpaid member of the board. As of 2021, the board members also included Walter Campbell, Stephen Redenti, Stephen Atkins, and Alexandra Phanord, according to the organization’s website.

“AAPCI has cooperated with us throughout this process, taking immediate steps to address the issues, and demonstrated commitment to working closely with us as they comply with our corrective action plan going forward,” Sharma said.

“This new facility will be the first of its kind in this community, offering dedicated support to individuals experiencing homelessness as they get back on their feet.

“We are grateful for the support this site has already received from some elected officials and advocates and we remain committed to working closely with the community to address any concerns as we collaboratively work to serve and support vulnerable New Yorkers.”