Almost back to normal? Libraries start to reopen 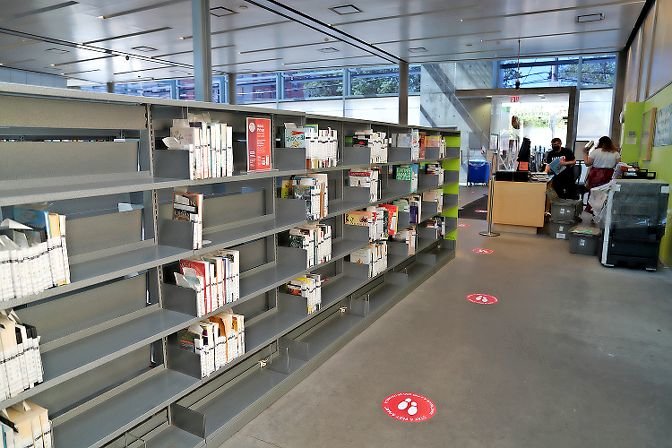 Seemingly desolate shelves and decals on the floor of the Kingsbridge Library may indicate strange times, but the patrons who continue visiting the West 231st Street branch ‘are just glad to see the staff,’ according to branch manager Martha Gonzalez-Buitrago.
Courtesy of Jonathon Blanc of NYPL 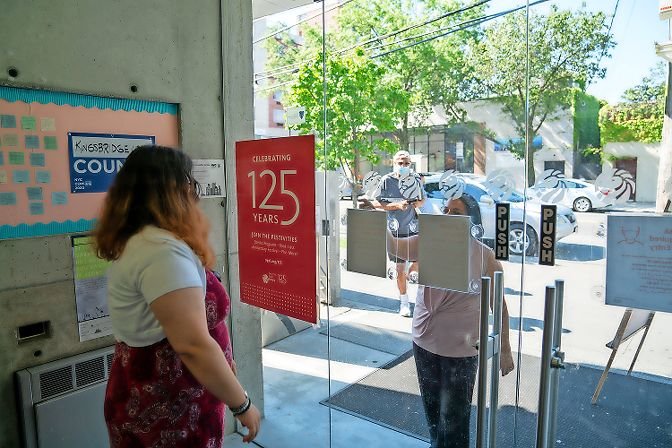 A librarian approaches the door of the Kingsbridge Library to let in a patron on the branch’s first day of partial reopening Aug. 3. For now, the West 231st Street branch is only permitting a grab-and-go service, which must be initiated ahead of time through an online reservation system.
Courtesy of Jonathon Blanc of NYPL 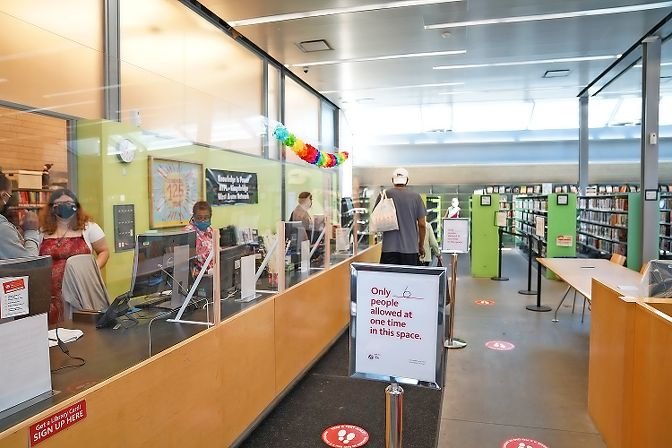 Decals on the floor indicate the six-foot distance patrons must maintain when entering the Kingsbridge Library, which partially opened to the public on Aug. 3. For now, patrons may only enter a small section of the West 231st Street library to pick up and return books.
Courtesy of Jonathon Blanc of NYPL 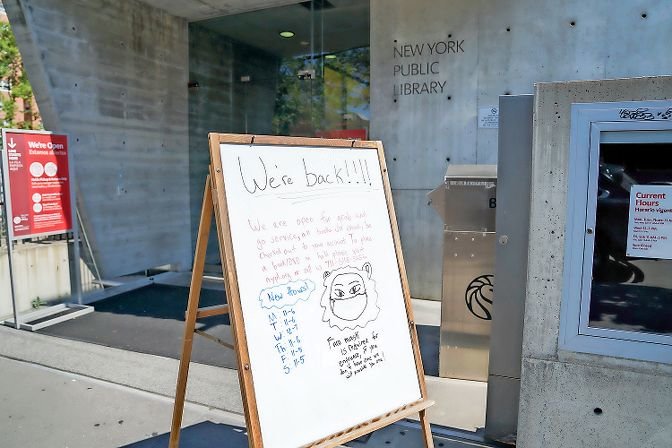 A sign posted outside the Kingsbridge Library informs anyone passing by on West 231st Street that the branch has now reopened in the wake of the coronavirus pandemic. However, service is limited to only grab-and-go, which must be set up online or over the phone before coming to the library.
Courtesy of Jonathon Blanc of NYPL 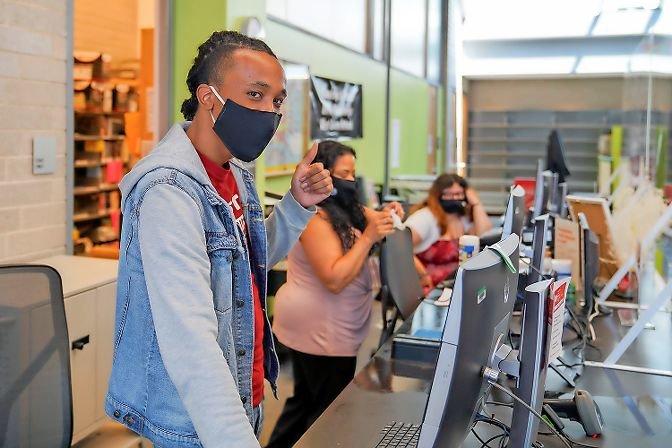 A librarian at Kingsbridge’s West 231st Street branch gives a thumbs up on the location’s first day back open to the public. Masks are required by both employees and patrons entering the building, and only grab-and-go services are being provided at this time.
Courtesy of Jonathon Blanc of NYPL
Previous Next
Library hours

• Monday and Tuesday from

• Friday and Saturday from

It seemed like any other summer Monday. Sunlight, totally unabated by clouds, beat down on West 231st Street, which, for many months, had been a little emptier than usual.

Fewer people getting on the bus. Hundreds of passersby donning masks and carrying groceries. Sweat dripping from short sleeves and landing squarely on a gloved hand.

Yet, with August still quite young, someone walking through the business district between Broadway and Riverdale Avenue may have noticed something they haven’t seen in months: Someone walking into the Kingsbridge library.

Branch manager Martha Gonzalez-Buitrago was there for the Aug. 3 reopening, and says she was as glad to see patrons as they were to see her. But it wasn’t as though all was back to normal.

“They were just so happy we were open,” Gonzalez-Buitrago said. “They’re still figuring it out, but our social distancing guidelines are marked with decals on the floor, and our drop-off only policy is comprehensive. They just love to see the staff.”

Opening the library door, patrons won’t find neighbors among the shelves, calmly searching for a novel or picture book to contemplate in the park. Instead they’ll see the friendly eyes of library employees, complete with gloves on their hands. No one is allowed to use the computers, and there can be no waiting around.

“Everything must be done ahead of time online,” Gonzalez-Buitrago said. “Patrons must request a place-hold, which is where you select a book from the online catalog. When you do that, you’re put in a queue until that book is ready to be sent to a nearby branch. You come on an open day, pick it up, grab and go.”

That system of interconnected branches within the structure of the New York Public Library is similar to the system used by New York City’s northern neighbor, Yonkers. As part of the Westchester Library System, the Yonkers Public Library was once able to get a book from Peekskill if someone had requested it. Yonkers library director Jesse Montero considered the limited size and number of Yonkers public libraries to be reason enough to halt that system.

“When we began our early reopening phases in May, we decided not to do that,” Montero said. “We did not want to have any transaction of materials that would involve a hand off, especially at the start.”

While Yonkers lies within a region of the state that reopened a few weeks earlier than New York City, Montero considers the numbers of coronavirus cases in Yonkers to be more consistent with the experiences of the five boroughs. And yet, since July, Yonkers libraries have been able to permit the public to remain within the library to look through stacks and sit at tables, as long as they follow guidelines.

While it may seem like a glimpse into the future, there is quite a bit to be cautious about.

“Just because we’re open now doesn’t mean I think all the other locations should be open, too,” Montero said. “We are all making the best decisions we can. However, it’s been good here thus far. We have a great custodial and security staff here, and if we didn’t, we would not be open.

“A library’s building is going to dictate what can and can’t be done.”

At the start, Yonkers libraries had no tables, no computer access. People could come in to browse books and DVDs, but a strict social distancing and mask-wearing policy was in place, as is the case in New York City libraries. Now, however, hand-in-hand with Yonkers custodial policies, libraries have begun a practice called “book quarantining.”

“We take the books returned and place them in tubs,” Montero said. “We then place them in quarantine for 72 hours, which is a guideline set by the CDC.”

It may seem strange to leave a tub of books in a back room for three days, but as the New York City library has continued its inter-branch distribution system, their own policy is just slightly more extreme.

“If somebody at Parkchester reserves a book and wants it sent to Kingsbridge, we are still doing that,” Gonzalez-Buitrago said. “They can call and we can walk them through it because we understand not everyone understands yet. When they return that book, we leave it in a clean room in the tub for 96 hours. If someone returns the book on a Monday, we won’t put them on a shelf until Saturday. Then, that book won’t be accessible until the Monday after, as the library is closed on Sunday.”

As more people venture out onto West 231st and head for their favorite local library, Gonzalez-Buitrago considers it vital to remember that while guidelines are still strict and demanding, the library is still glad to welcome everyone.

“They appreciate that they can come into the location instead of doing a curbside pickup,” Gonzalez-Buitrago said. “They try to hang out and they know they can’t. We are, however, so thankful for their support and their patience.

“It’s a lot of changes, so everyone is learning something new.”