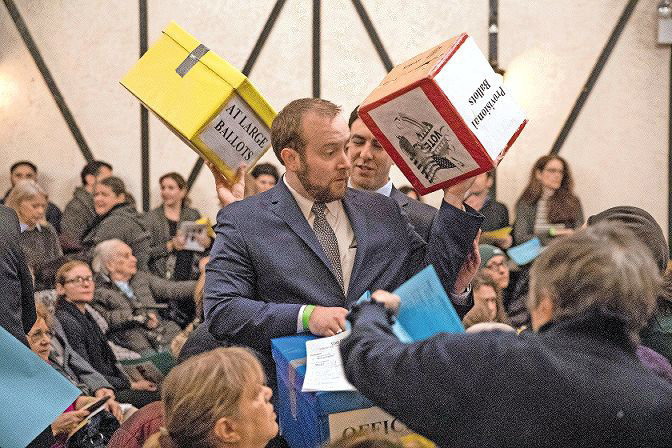 The local chapter of war veterans sold its 3035 Corlear Ave., headquarters just before Christmas — becoming yet another neighborhood property acquisition of the holding company that owns the Western Beef supermarket chain. The sales price, according to city property records, was $1.75 million.

The structure has been the site of many community events over the years, including some of the larger gatherings of the Benjamin Franklin Reform Democratic Club, as well as neighborhood visits by various politicians. It was even featured in the 2019 Martin Scorsese film "The Irishman," with Al Pacino delivering a speech from its stage as infamous union boss Jimmy Hoffa.

The building was originally constructed as a parish hall for the Episcopal Church of the Mediator in the 19th century, but was purchased and moved when the current church building was constructed, according to the late historian William Tieck. It was moved twice, finally settling in on Corlear.

The Five Points Masonic Club purchased the building in 1928, but lost it during World War II because it couldn't keep up with mortgage payments, according to Tieck. The American Legion post acquired the building in 1945, and has been there ever since.

It's not clear what Cactus of Harlem — the limited liability corporation that purchased the property — has in store for the property, as no permits of any kind have been filed. Requests for comment from both Cactus and the American Legion post are pending return as of mid-afternoon Friday.

Cactus has made two other larger property purchases nearby in  recent years, including its $20.8 million purchase of the former 24 Hour Fitness location less than a block away at West 231st Street and Tibbett Avenue.  The company also was one of the buyers of a group of retail buildings — including the Kingsbridge Post Office — at West 230th Street and Broadway, paying $14 million in 2017.

Cactus has made no changes to either property since purchasing them, and it's possible that would be the strategy for the American Legion site as well.

The property is zoned for higher-density residential, however, which could potentially allow Cactus to build an apartment building as-of-right.

Cactus Holdings says it owns more than 2 million square feet of real estate across New York City, according to its website. Western Beef was founded in 1963 as Ranchers Packing Corp., but was acquired by Ranbar Packing in 1976, according to published reports, owned by Peter Castellana.

Castellana struggled with the law — including serving time for bankruptcy fraud in a case prosecuted by then-U.S. Attorney Robert Morgenthau — and was reported to have mafia ties, according to published reports. He was dismissed by his son, Peter Castellana Jr., in 1996 because of those ties, who vowed to make the company legitimate.

By then, the company had been renamed Western Beef, and was converted from a meat wholesaler to a supermarket chain based out of Ridgewood. It has more than two-dozen stores across the greater New York City region.