Amid budget cuts, CUNY students want to tax the rich 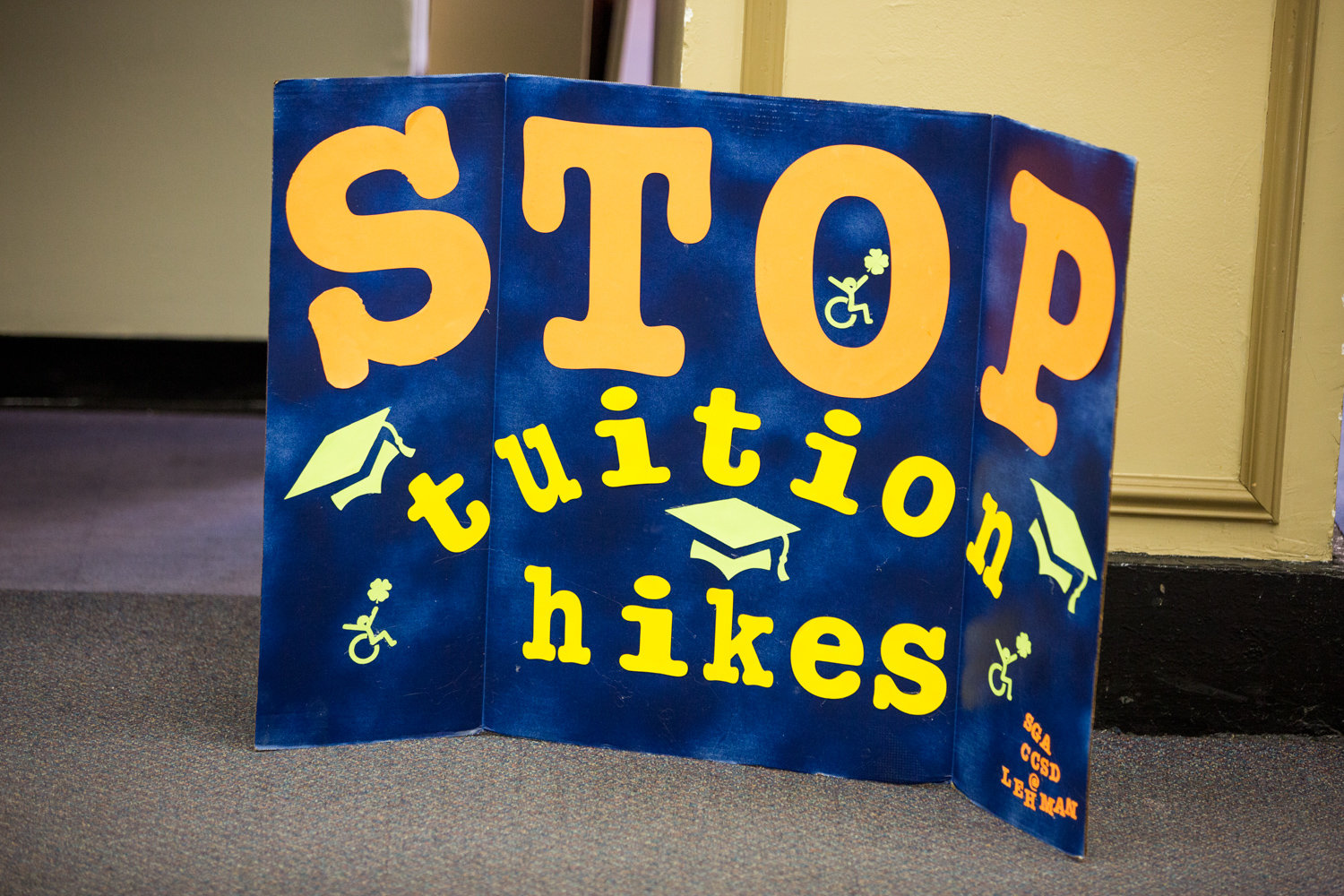 A poster that reads ‘Stop tuition hikes’ stands on the floor during a March 9 forum hosted by the CUNY Rising Alliance at Lehman College, which dealt with proposed budget cuts and tuition hikes.
JULIUS CONSTANTINE MOTAL 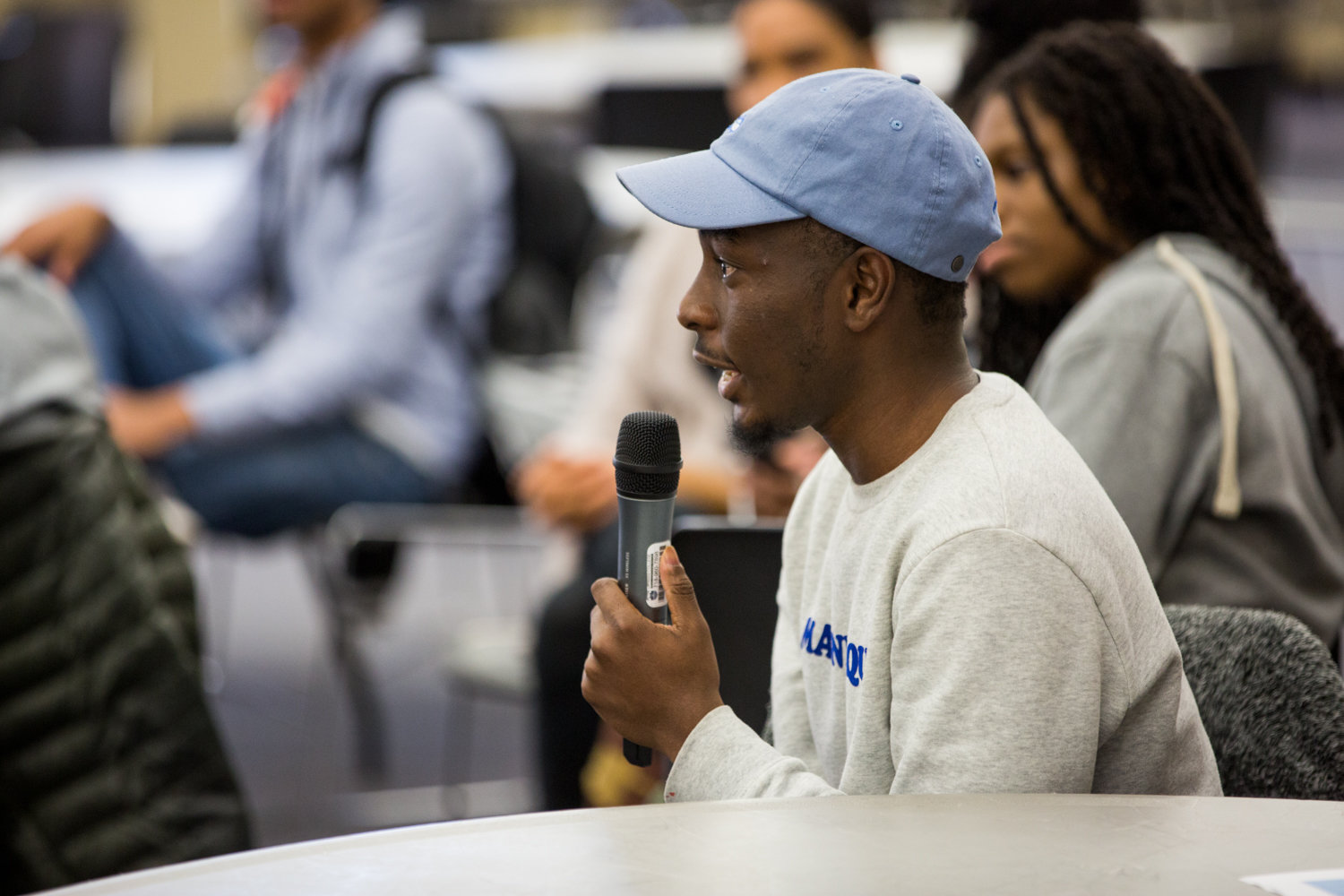 Lehman College student Hussein Abdul talks about mental health issues students deal with during a March 9 forum hosted by CUNY Rising Alliance, which has advocated on behalf of students across the university system.
JULIUS CONSTANTINE MOTAL 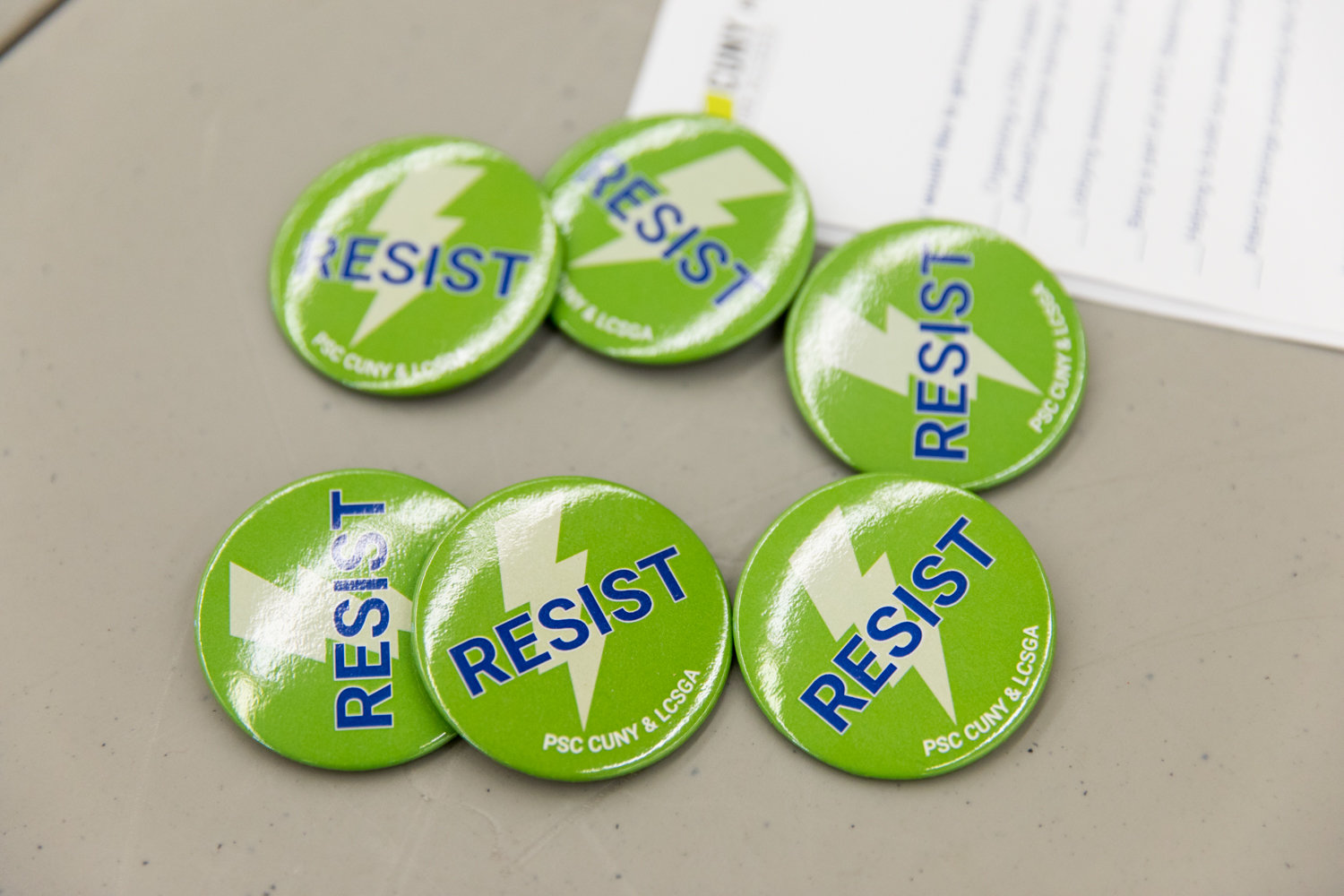 Pins that read ‘resist’ rest on a table during a March 9 forum hosted by the CUNY Rising Alliance at Lehman College, which dealt with proposed budget cuts and tuition hikes.
JULIUS CONSTANTINE MOTAL 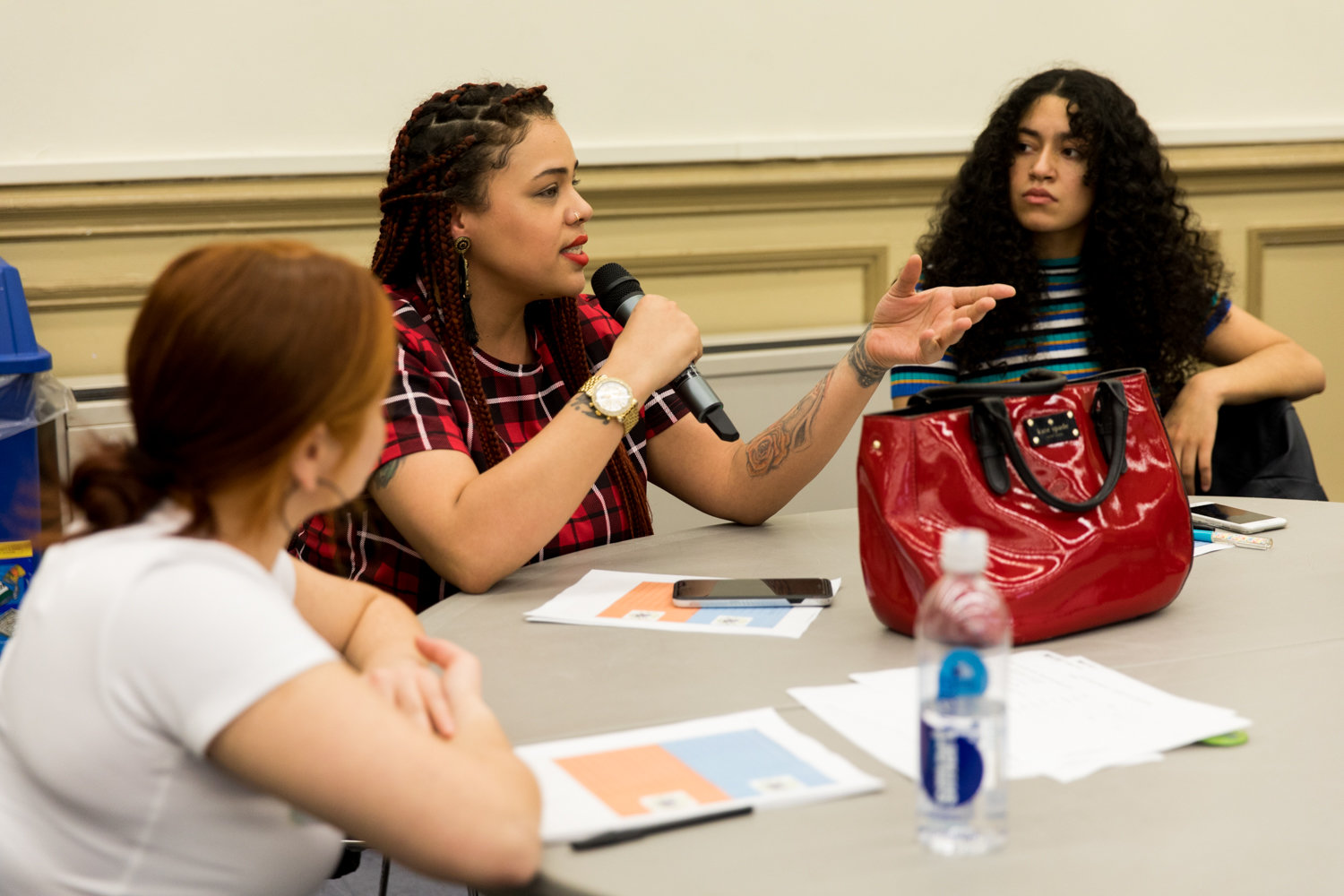 Lehman College student Emily Garcia talks about the rising cost of food during a March 9 forum hosted by the CUNY Rising Alliance that sought to address a wide variety of students’ concerns, including possible tuition hikes.
JULIUS CONSTANTINE MOTAL 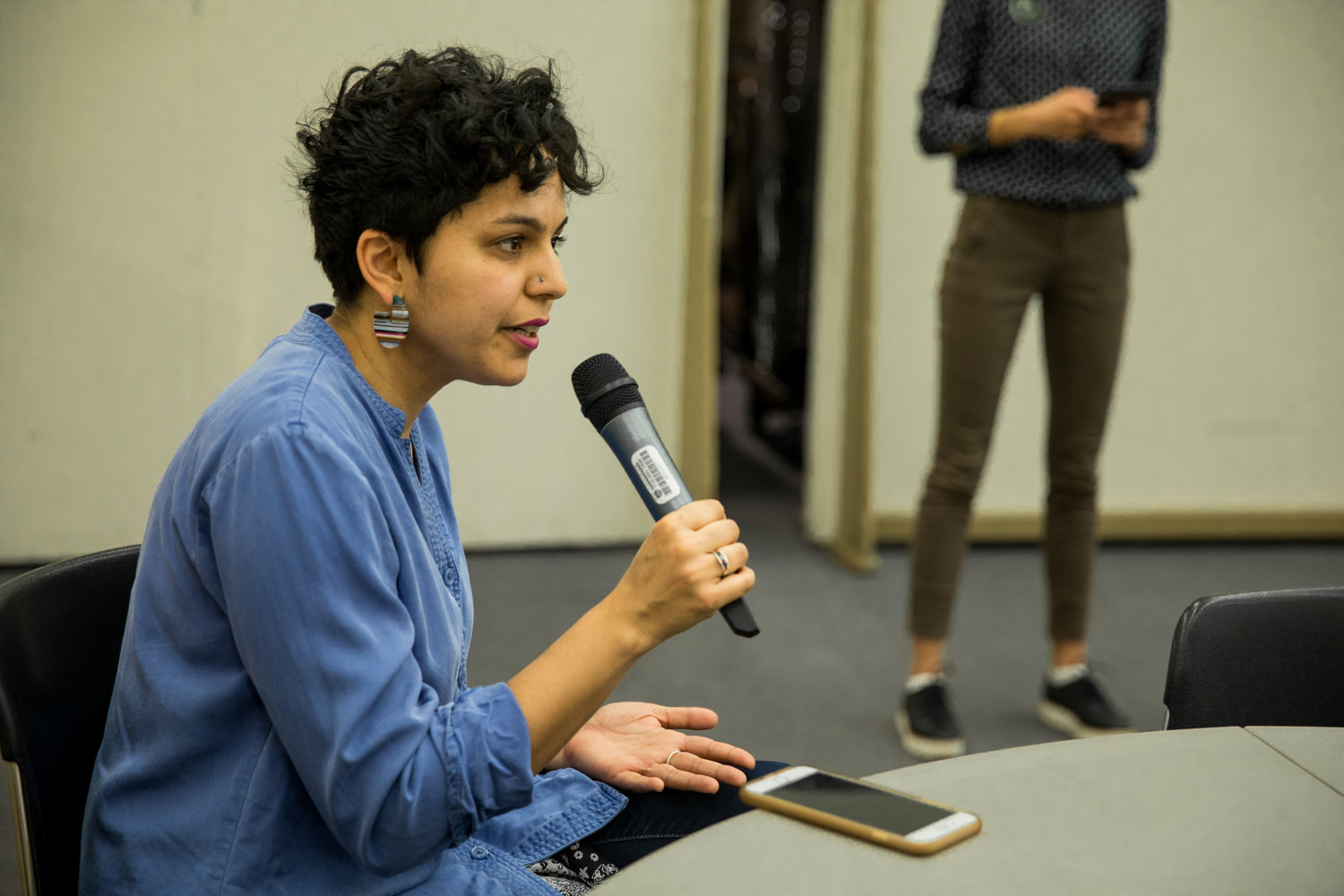 Lehman College English professor Vani Kannan talks about the importance of supporting local community organizations and how access to food is an issue for some CUNY students during a March 9 forum hosted by CUNY Rising Alliance.
JULIUS CONSTANTINE MOTAL
Previous Next
By PATRICK LINDO

With the ongoing COVID-19 pandemic rupturing the economy, funding and budgets for schools nationwide have been slashed. CUNY schools like Lehman College are not immune, with system-wide cuts expected to reach as high as $95 million.

In a domino effect, budget cuts could cause layoffs, course reductions and higher tuition fees, possibly contributing even more to the growing list of issues in an academic community already struck hard by the pandemic.

But all those cuts aren’t necessary — and could be detrimental to the schools and the students who depend on it — in the long-term. That’s according to CUNY Rising Alliance, a coalition established in 2015 of students and other community leaders fighting for, among other things, free tuition at CUNY schools.

Some members of the group shared a call opposing the proposed cuts, and even going as far as demanding a tuition freeze and refunds during a webinar CUNY Rising hosted last week.

How would such actions be funded? It’s easy, group leaders said. Tax the rich.

The coronavirus crisis that has shut down the state since mid-March has financially devastated many families, businesses and even institutions of higher learning — but that doesn’t even begin to compare what some undocumented students have faced, said Enrique Peña-Oropeza, a student at Queens College.

Undocumented students are ineligible for financial aid programs, meaning all their costs and tuition is paid out of pocket, Oropeza said. For his family, that meant digging deep into savings to cover rent and tuition after both he and his father — the only two members of the household able to work — lost their jobs at the outset of the pandemic.

The strict policies from the school left Oropeza feeling unwelcome, he said, and could result in him not returning to college next semester.

“We continue to say that our state is progressive and our university cares about the immigrant community,” Oropeza said. “But the system treats us as second-class citizens.”

Another Queens College student, Kasson Colon-Mangin, shared how he found a safe haven on CUNY campuses which helped him avoid the “school to prison pipeline” typical of his background. He asked what it meant for students of color when the financial capital of world is facing economic catastrophe, pleading for the state, and administrations to be more considerate to the circumstances for students.

Colon-Mangin’s family struggles with money in the midst of the pandemic. Still, he tries to make trips to the market, even when it’s not exactly safe.

“We’re supposed to stockpile for food, (but) we didn’t have savings to be able to stockpile,” Colon-Mangin said. “So we have to go to the market every few days to just replenish our supply. And this puts everyone at risk. These markets are overcrowded.”

Colon-Mangin also worked through some personal mental health issues prior to the pandemic — issues that have since magnified under the strain of the crisis.

“They should be decreasing tuition, adding more resources to mental health and to technology,” Colon-Mangin said. “This is where students need more hope.”

The budget cuts are political, said Lehman associate professor Robert Farrell, pointing to historical examples the CUNY system could follow, like that of one-time New York governor Franklin D. Roosevelt raising taxes on the rich at the start of the Great Depression on his way to the White House. The taxes helped the schools maintain revenue streams during that economic crisis, Farrell said.

Yet, that’s not happening now, he added. And the most vulnerable could be part-time workers, eliminated in what Farrell described as “silent layoffs.”

A Lehman student, Jianee Carrasco, said she and many of her fellow students depend on financial aid for classes they need to take during off-semesters like the summer and winter to meet degree requirements. Funding cuts and tuition hikes also would affect out-of-state and international students, she added — students who already pay more than many of their counterparts because of housing, since they can’t just commute from their family homes.

When it’s all said and done, funding cuts and tuition increases are contradictory to CUNY’s rich history as a provider of social mobility and higher education to less fortunate groups, according to another Lehman student, Victoria Smith.

“We cannot gain access to be better leaders and better individuals if you keep cutting back on our university _ especially when it happens to be a majority of residents that are not only people of color, but representing lower-income communities,” said Jamell Henderson, who hosted the webinar for CUNY Rising.

“This is a gateway for communities to level up.