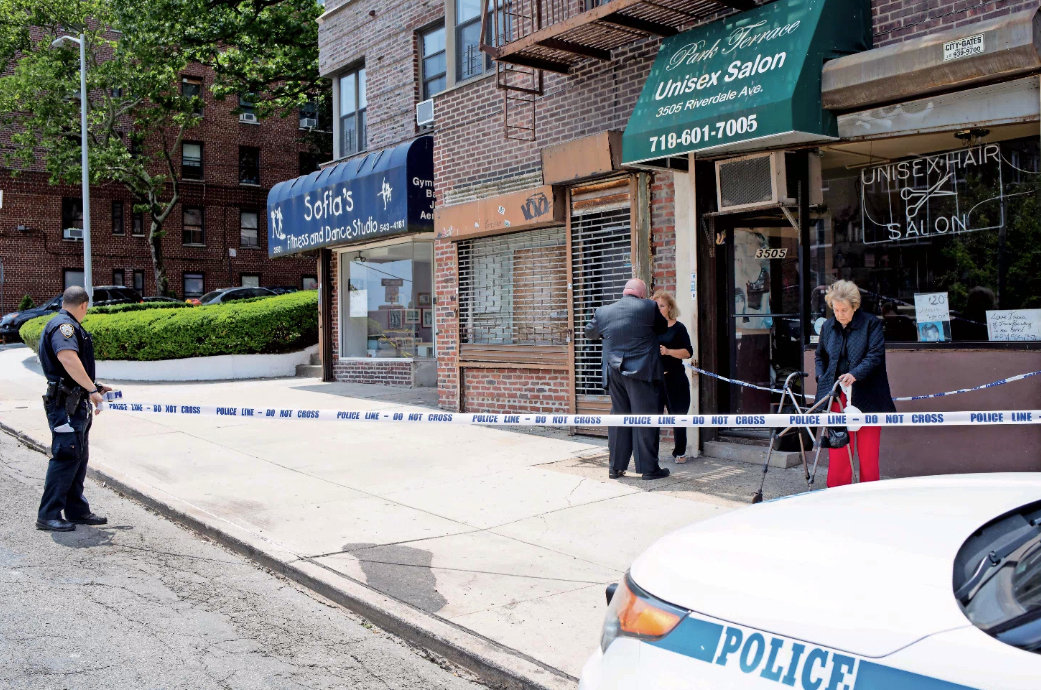 A police officer sets up a perimeter around the Park Terrace Unisex Salon on Riverdale Avenue during a robbery investigation in 2018. Crime has risen in some key categories, according to the New York Police Department, which they blame on bail reform.
JULIUS CONSTANTINE MOTAL / File 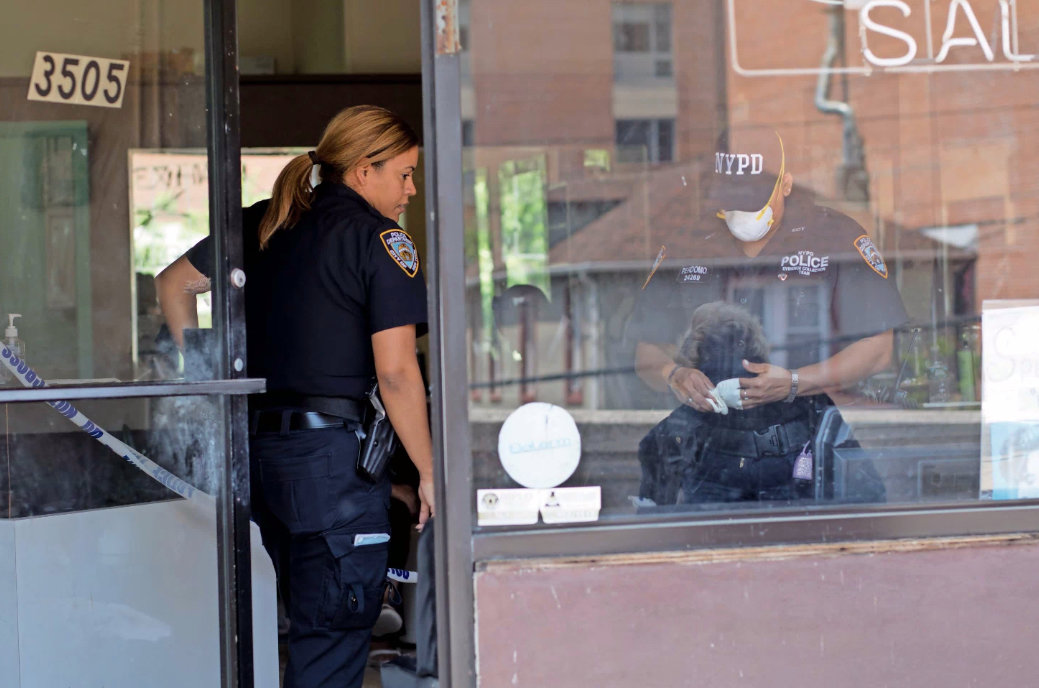 Police officers investigate a robbery at the Park Terrace Unisex Salon on Riverdale Avenue in 2018. Some non-violent crime is up in the 50th Precinct, which NYPD administrators want to blame on bail reform.
JULIUS CONSTANTINE MOTAL / File 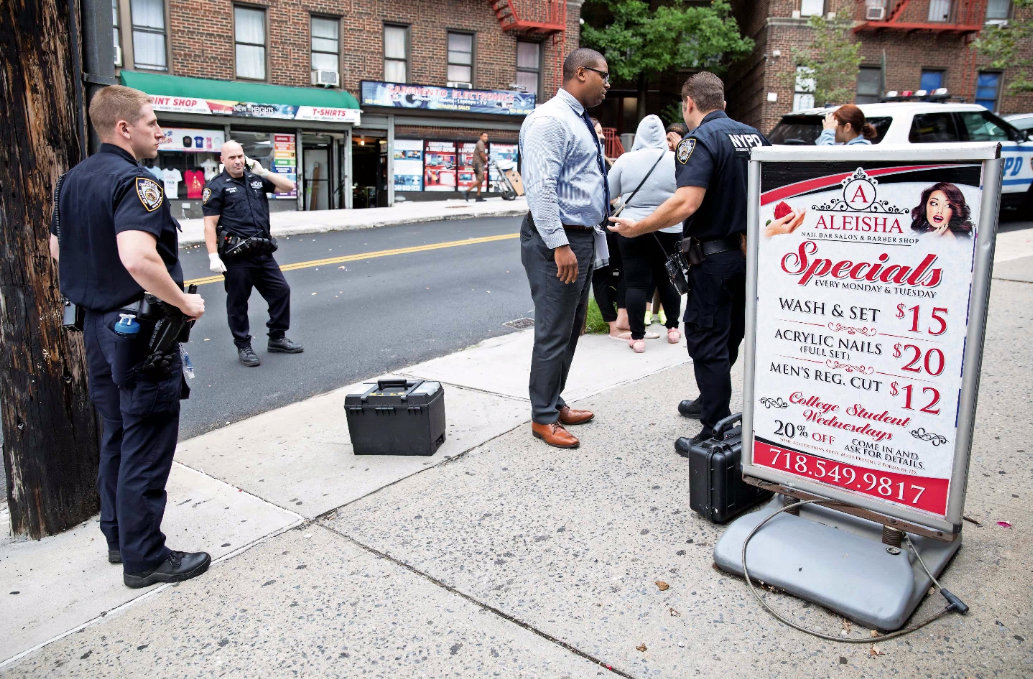 Police officers and detectives respond to a string of burglaries at three businesses on West 238th Street near Bailey Avenue in 2019. Burglaries are up, along with some other non-violent crime in the 50th Precinct, police — something they’re blaming on bail reform.
JULIUS CONSTANTINE MOTAL / File 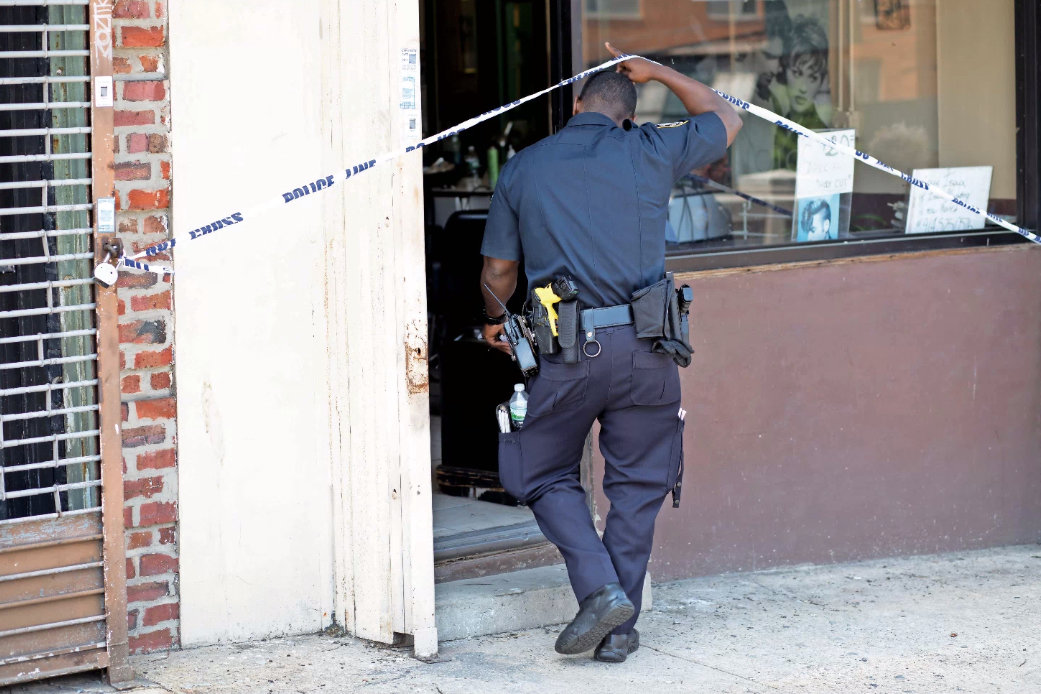 A police officer walks into Park Terrace Unisex Salon on Riverdale Avenue in 2018, which at the time had been one of several businesses targeted by a robber. Robbery is one of the non-violent crimes that is up in the 50th Precinct.
JULIUS CONSTANTINE MOTAL / File
Previous Next
By KIRSTYN BRENDLEN

It’s usually one of the quietest precincts in the borough, to the point that even when crime rises across the city — or even across the Bronx — the 50th Precinct stays relatively immune.

And then, of course, the stay-at-home orders which have plagued most of 2020 so far didn’t hurt. Still, felony assault and burglary are up locally, with grand larceny auto jumping 71 percent in the past six months compared to the year before.

Why? It’s hard to say. In April, precinct commanding officer Capt. Emilio Melendez said the coronavirus pandemic flattened crime rates as businesses shuttered across the city and people hunkered down in their homes. But things have changed dramatically — even in the last month as the city and state slowly begin to reopen.

The first weekend in July was a shockingly violent one in the city, with 11 people killed in 30 shootings.

During a July 6 news conference, Jason Wilcox, the New York Police Department’s assistant chief, expressed frustration about those numbers, citing bail reform, releasing at-risk prisoners from Rikers Island at the height of the COVID pandemic, and court slowdowns for why those numbers have increased.

“If these tremendous challenges were not enough, New York City had days and days of anti-police marches that honestly crushed the morale of our cops,” Wilcox said. “And it created a large sense of animosity towards the cops. And I’m not talking about the peaceful protests.”

There have been four shooting incidents in the 50th Precinct this year, a 300 percent increase over 2019. Yet, there has been only one homicide this year — and that didn’t involve a gun.

Still, in light of the police-involved death of George Floyd in Minneapolis last May, the NYPD has changed a bit in recent weeks, with Commissioner Dermot Shea dismantling the department’s plainclothes anti-crime units.

He said 600 officers would be transitioned to alternate assignments, including within the detective bureau and neighborhood policing.

Gun violence already was up that week prior to the disbanding of the plainclothes unit, Shea said, and criminal justice systems and courts needed to start up again to keep the city safe.

Michael Lipetri, the NYPD’s crime control strategies chief, said the last time gun crimes were so high was 1996, and also pointed to bail reform as a factor driving crime up, despite recent rollbacks to the reforms, which added more crimes to the list of bail-eligible offenses.

“If anything, bail reform in the last month has been rolled back,” Northrup said. “I don’t think there’s any evidence that bail reform has anything to do with this. If you look, crime is actually down from their own data overall.”

Violent gun crimes are still eligible for bail, Northrup said, and the link between an increase in violence over the weekend and bail reform was tenuous at best.

Some of the most common crimes in the northwest Bronx are not eligible for bail, as they’re considered non-violent.

Lipetri said that those nonviolent crimes, like robbery and burglary, were “absolutely” being driven by bail reform. He cited perpetrators of robberies in mom-and-pop stores, or of people walking on the street, as crimes not eligible for bail.

During a recent meeting of Community Board 8’s public safety committee, Melendez did cite bail reform as a reason for an increase in crime, according to the meeting’s minutes. Burglaries, which are not eligible for bail, were up 128 percent during the week ending on June 14, compared to the same time period last year.

Northrup said that existing solutions for those crimes weren’t really solutions at all.

“What we know is that the impulse to arrest, punish, incarcerate, our way out of crime or complex social problems hasn’t worked,” Northrup said. “We push for investing in strong, accessible, culturally competent systems, infrastructure, that center the needs of low-income, Black, Latinx, and communities of color. Social services, public infrastructure, rather than investing money in the police department. Because that hasn’t been working.”

During his own July 6 briefing, Mayor Bill de Blasio said violence plaguing the beginning of July must be met with neighborhood policing, including relying on resources outside the NYPD, especially in Upper Manhattan and Harlem, which had a large concentration of the shootings.

“It will take the efforts of clergy and block associations and elected officials and civic groups and parents and the Cure Violence movement,” de Blasio said. “We’re going to need all hands on deck to address this issue.”