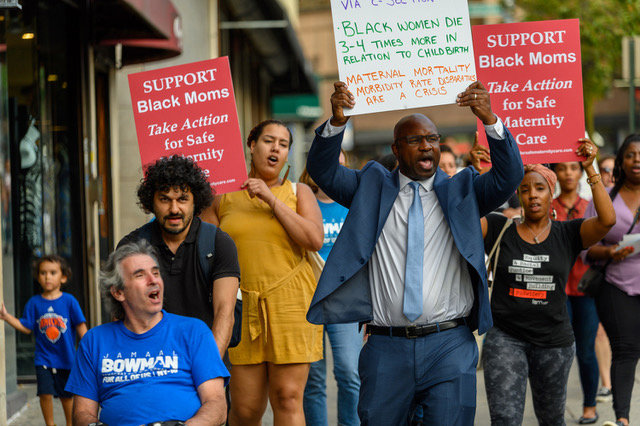 U.S. Rep. Jamaal Bowman says the New York Police Department’s deployment of a robotic ‘dog’ is the latest example of the department’s bloated budget. Bowman is renewing calls to move money away from the NYPD to other city agencies in the wake of the killing of Daunte Wright in Minnesota earlier this month.
Courtesy of Jamaal Bowman 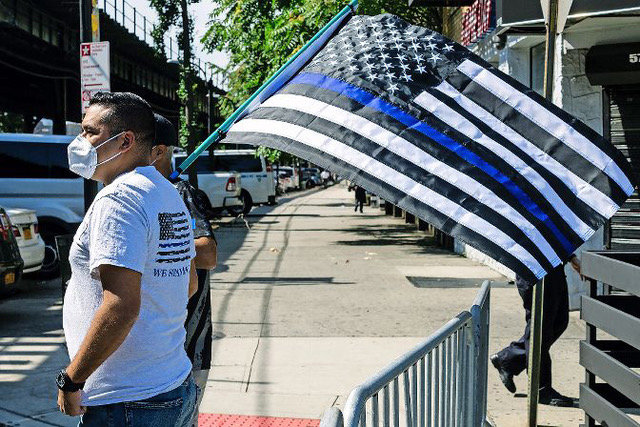 The Police Benevolent Association and other police unions have been fiercely critical of reforms like last year’s repeal of 50-a — a law shielding police misconduct complaint records from the public. Now there’s renewed calls for further police reforms at the state and city level since the killing of Daunte Wright in Minnesota earlier this month.
NOAH BENUS/ File 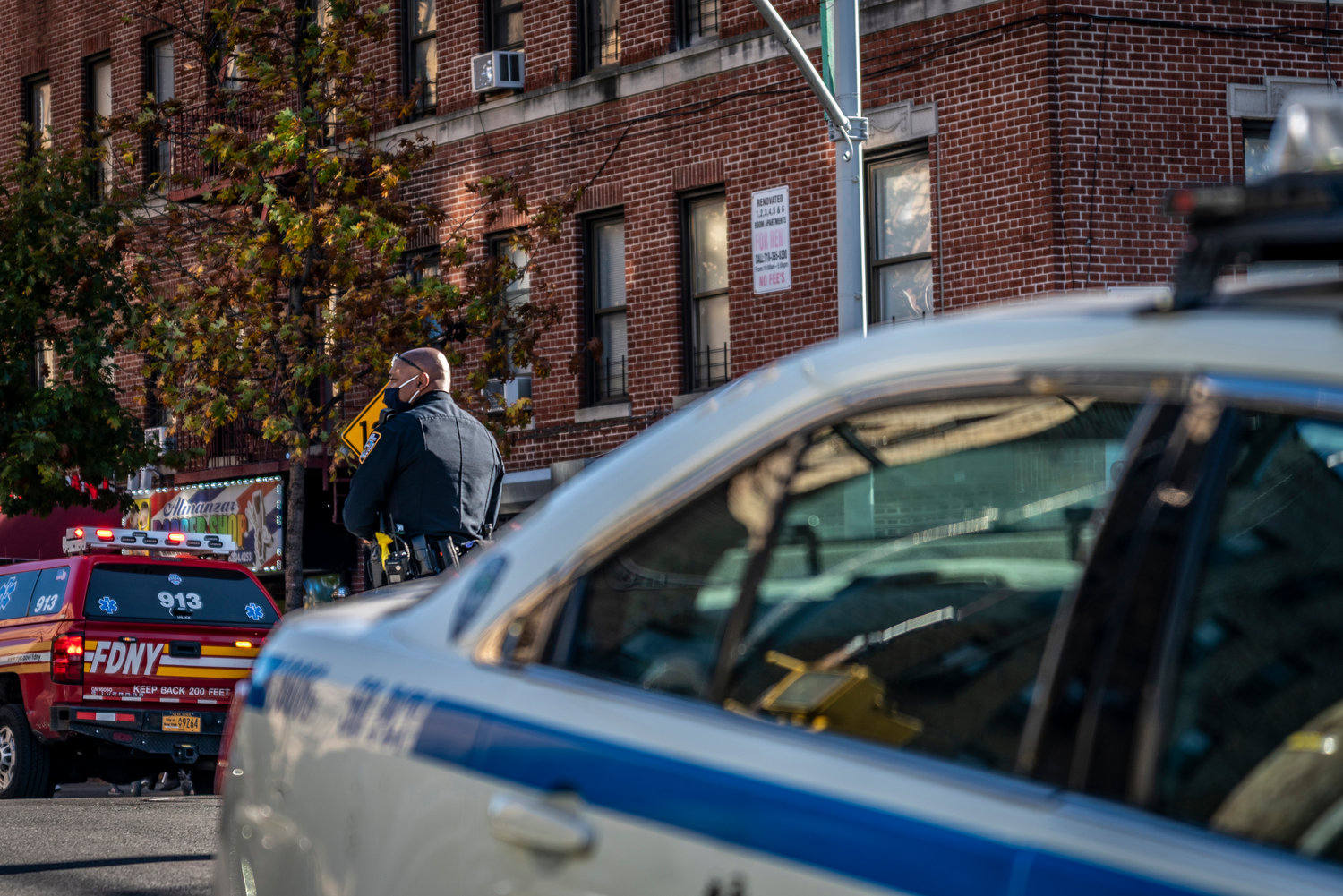 State Sen. Alessandra Biaggi thinks traffic enforcement should be moved from police departments to a new state agency within the transportation department. This is one of many reforms that could be on the table in the state legislature this session since Daunte Wright was killed earlier this month in Minnesota.
HIRAM ALEJANDRO DURÁN/File
Previous Next
By ETHAN STARK-MILLER

Although it’s dominated the news for the past year, Americans’ reckoning with how Black communities are policed is hardly new — even in the wake of killing of George Floyd in Minneapolis.

That reckoning continued this month, not just with the trial of the cop charged with Floyd’s murder, but yet another police shooting of a Black man in the same metropolitan area. Daunte Wright was shot and killed by a police officer on April 11 after he was pulled over in Brooklyn Center,  a Minneapolis suburb just miles from the courthouse where former police officer Derek Chauvin faced a jury of his peers.

Wright’s death — reportedly after a cop mistook her actual gun for her stun gun — is the third publicized fatal shooting of a Black man in this part of the Midwest following not only Floyd, but also Philando Castile in 2016.

Wright’s death, however, has a very familiar feeling for U.S. Rep. Jamaal Bowman.

“For me, as a Black man, every time a Black man or Black person is killed by the police, part of my soul is ripped out,” the congressman said. “And it’s another strike against building trust between police departments, governments and the Black community — trust that historically has been difficult to build.”

Floyd’s killing sparked summertime protests across the county — including here in New York City — calling for dramatic changes to how police departments operate. Some pushed for “defunding the police” — significantly cutting law enforcement budgets and moving many non-enforcement responsibilities to other agencies.

Lawmakers in Albany passed a package of police reform bills last year that had languished in committee for a long time prior. These included a ban on police use of chokeholds as well as the repeal of 50-a — which had shielded complaints of police misconduct from the public.

More recently, the city council moved to make it far easier for people to sue police officers over alleged misconduct, like the use of excessive force and illegal searches. They did it by limiting “qualified immunity” — a legal defense for police officers shielding them from personal lawsuits accusing them of rights violations.

While these are crucial reforms, Jennifer Scarlott believes a lot more needs to be done.

“We have years to go on this,” said Scarlott, a leader of the North Bronx Racial Justice advocacy group. “I think the institution needs to be radically transformed, and that should involve shifting funding from traditional and highly militarized police forces to communities who’ve been starved of funding for such a long time.”

“They’re literally building robot police dogs and having them surveilling potential crime scenes and communities,” Bowman said. “You know, if that’s not an indication that we’ve gone too far with this, I don’t know what is.”

The city council has debated the extent of NYPD funding, ultimately chopping $1 billion from its $6 billion budget. Council members justified this move by shifting some non-enforcement responsibilities away from the department.

Advocates have specifically called for shifting responses to mental health crises, traffic enforcement and school safety away from the NYPD.

State Attorney General Letitia James has gone a step further, recommending the NYPD no longer make traffic stops. According to a published report, she argued traffic stops for minor offenses often escalate into violent encounters. So moving traffic enforcement away from police would logically reduce the risk of violence.

Getting police officers out of schools also is very important, Scarlott said, because their presence is damaging to low-income children of color.

“It’s flagrantly racist,” she said. “And these kids are literally treated like prisoners as they go through metal detectors and get frisked and all of it.”

But not everyone agrees it’s necessary to go that far. Police commissioner Dermot Shea is against many of these proposals, as are police unions. And newly minted councilman Eric Dinowitz, for one, said he wouldn’t have supported pulling a billion dollars out of the police department last year.

“Cutting the NYPD budget doesn’t fundamentally answer the questions that need to be asked,” Dinowitz said. “What does robust and comprehensive training look like? What does accountability look like? Funding doesn’t address that.”

Instead, the city should reform the department by empowering the existing Civilian Complaint Review Board — the city’s independent police misconduct watchdog — by giving the board disciplinary authority, Dinowitz said. Right now, the board can only recommend discipline. What ultimately happens to an officer is solely in the hands of the police commissioner.

In fact, state Sen. Jamaal Bailey and Queens Assemblywoman Catalina Cruz have introduced a bill in Albany that aims to do exactly that.

Dinowitz also thinks the NYPD should extend anti-bias training and make it ongoing, not just something that’s one-and-done in the academy.

“I don’t believe that six months is long enough to train someone,” Dinowitz said. “I think we need to take a hard look at what the requirements are, and what ongoing training looks like.”

Scarlott said she’s not impressed with Dinowitz’s position on police reform so far.

“Frankly, he seems more to be giving lip service to the concept than to be a true advocate of defunding the NYPD or reinvesting in communities.”