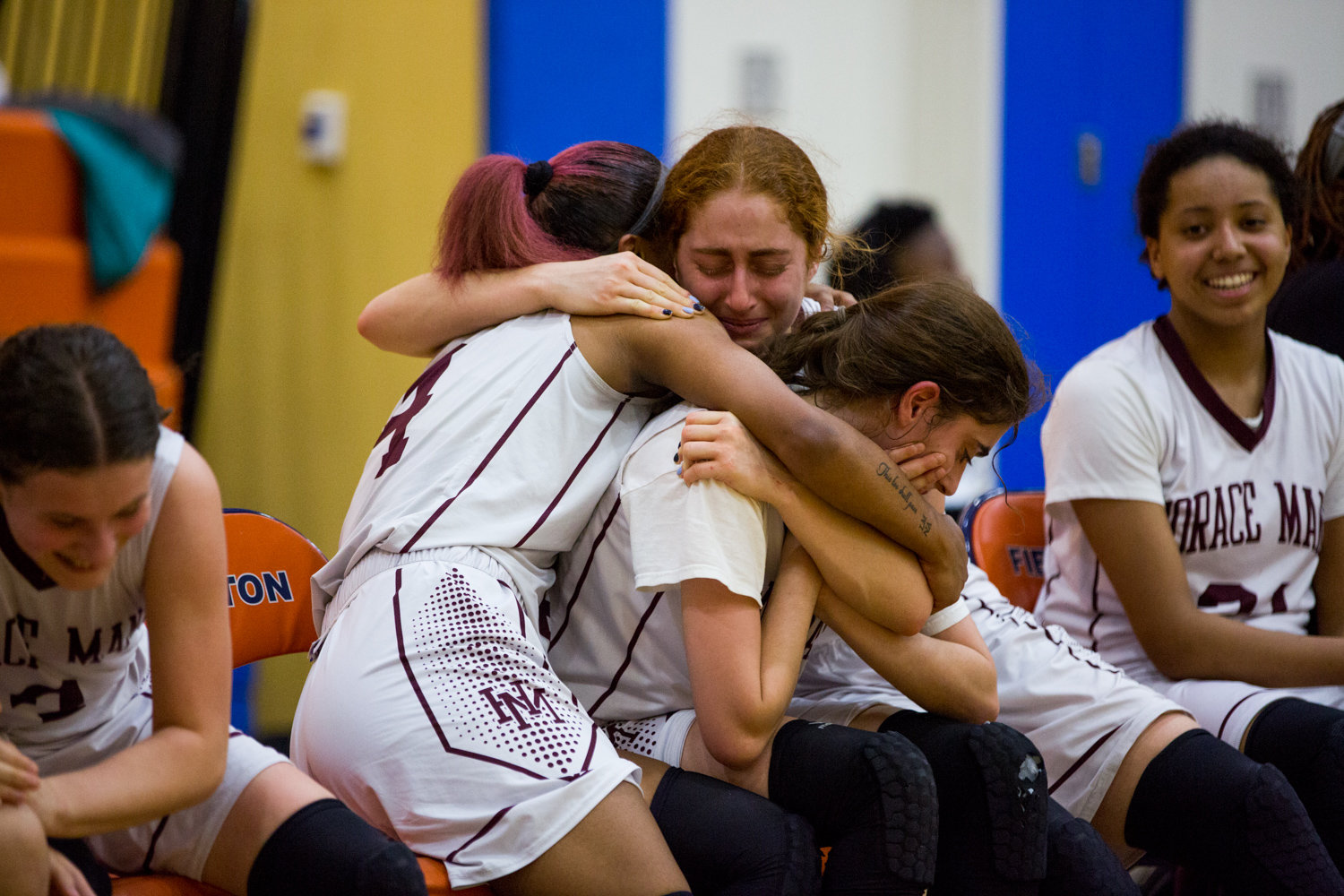 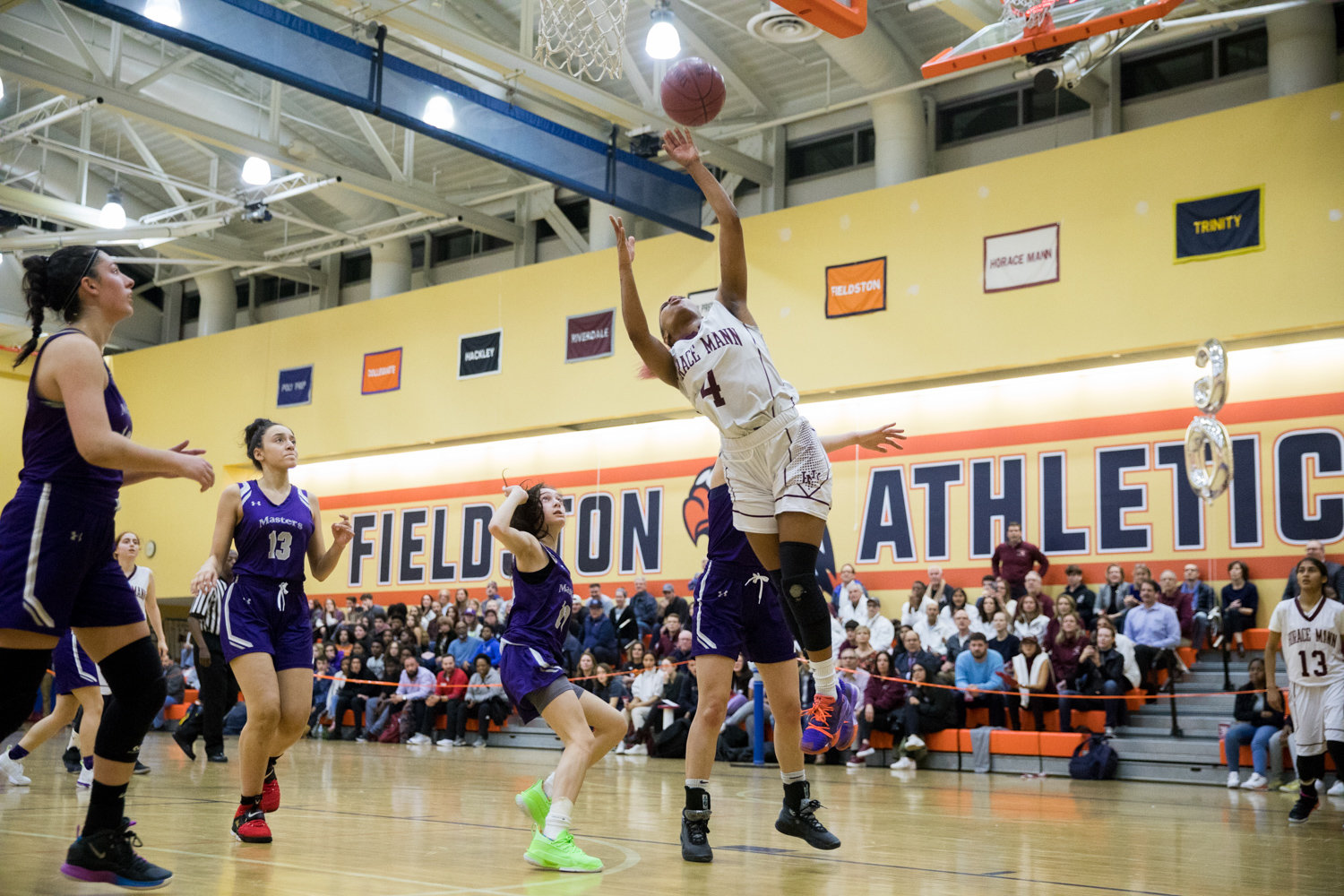 For the Horace Mann girls basketball team, the 2019-20 season was playing out exactly the same way last season had. The Lions rolled through an unbeaten Ivy League campaign this year, just as they did last season when they captured their first title in more than two decades.

They rode the senior trio of Ella Anthony, Julia Robbins and Halley Robbins to yet another 20-plus win season and a berth in the New York State Association of Independent Schools tournament, looking for their first-ever state championship, just as they did last year.

And the final game this season saw the Lions face The Masters School, just as they did in the state title game last year.

And just like last year, the final score would once again reduce Anthony and the Robbins sisters to tears.

But unlike last year, when Masters short-circuited Horace Mann’s title hopes, the tears the Lions shed Monday night were those of pure joy. This time the scoreboard read: Horace Mann 55, Masters 33. And with it, the Lions claimed the first girls basketball state championship in school history.

“They had to go out like this,” said Lions’ head coach Ray Barile, who completed his 38th year at the helm Monday night. “It’s the perfect way for them to go out.”

There were only two obstacles the Lions had to overcome versus Masters. The first came two minutes into the game when Anthony was forced to leave with a bloody nose. She returned three minutes later.

The second was when the Lions found the door leading back to the court following halftime to be locked. But after some pounding, they eventually made their return.

Other than that, it was a picture-perfect night for Horace Mann. With Anthony scoring 14 of her game-high 25 points in the first half, the Lions built a 34-12 lead at the intermission, and were never seriously challenged in the second half.

In fact, with Horace Mann holding a 50-28 lead late in the game, the only thing left for Barile to do was sub out his senior tri-captains and allow them the opportunity to hear the loud cheers from the boisterous crowd one final time. That moment came with 1:21 to play. When the three reached the bench, tears began to flow.

“My sister and Ella were a little bit more emotional,” Halley Robbins said. “I just don’t think it has really hit me yet. I thought it would hit me harder, but I’m still thinking I have practice tomorrow. But as soon as it hits that I’m done and I’m not coming back for another season, I think that’s when I’ll get a little emotional.”

Halley’s sister, Julia, simply couldn’t hold back the tears as she sat on the bench for the final seconds. Partly because of the history she just helped make, and partly for another more personal reason.

“Once I realized they were taking the three captains out, it hit me that I’ll never be playing with these people again,” Julia said. “But the bigger part that made me so emotional was that I would never be coached by Barile ever again. And that’s very upsetting to think about.”

Anthony, the daughter of former Knicks’ guard Greg Anthony, said the three seniors simply wanted to enjoy their final seconds together as teammates as they hugged on the bench.

“We were kind of reflecting on things,” Anthony said. “But we were also so in the moment, trying to soak up every second of this. It doesn’t get much better than this. We were sad that the season was over, but so incredibly proud of our teammates and our sisters. We were overwhelmed, but in the best possible way.”

In their final two seasons, Anthony and the Robbins sisters led the Lions to a 48-3 record, two Ivy League titles, and now, the New York State Class C Championship. It’s quite the legacy to leave.

“We had a mission to come back here again and redeem ourselves,” Barile said. “I’m just so happy for all of them, particularly my seniors.”

Julia Robbins said it was a special season and a special night. One that will forever leave its mark at Horace Mann.

“It certainly feels fantastic to make history, and to do it with such a great group of girls and such a fantastic coach,” she said. “I think you rarely get that lucky.”

Then the tears began welling up again.

“And to be coached by the same person for four years and to have him be such a great guy, I’m just super lucky,” Julia added. “I’m just really grateful that I had that.”