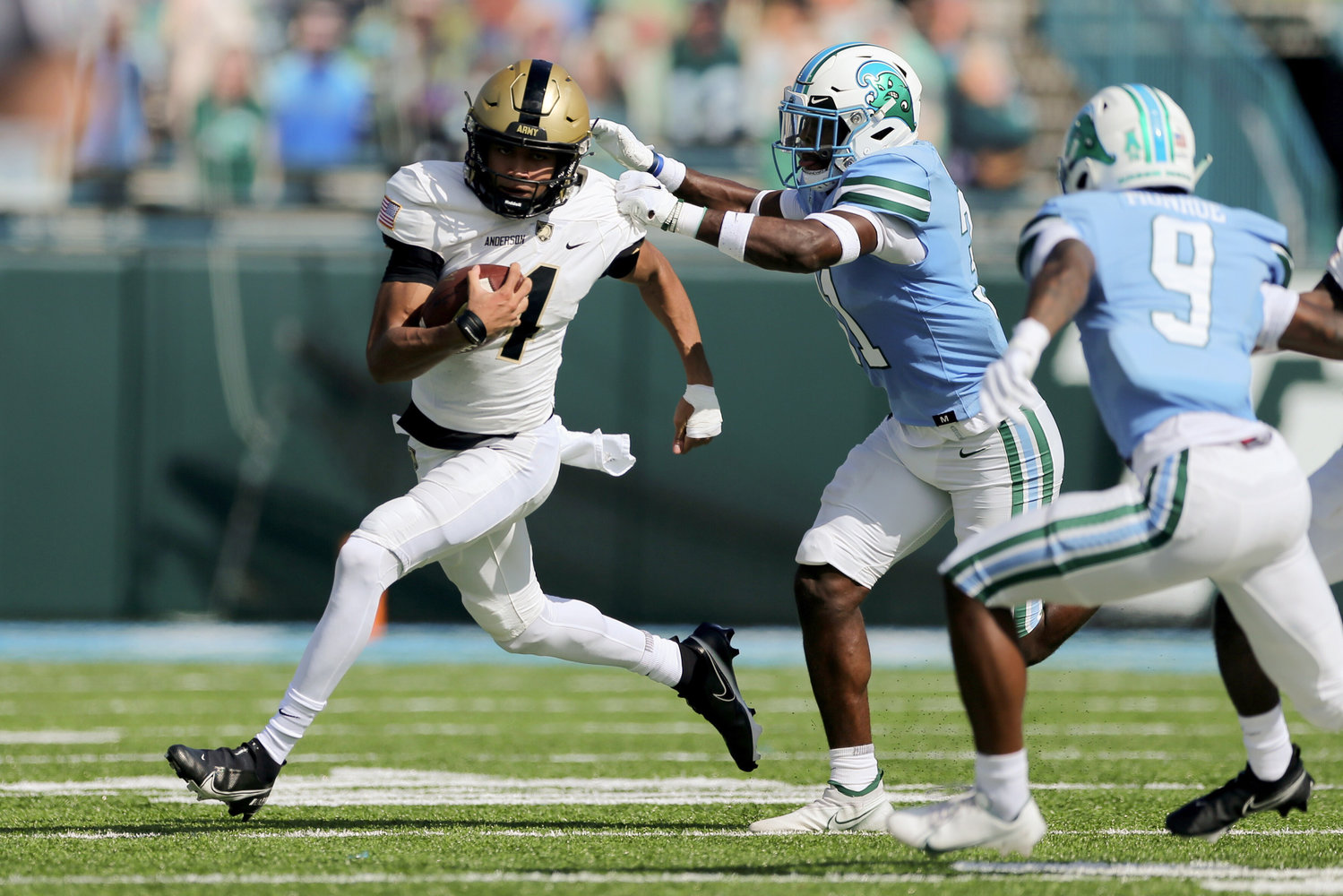 Army quarterback Christian Anderson tries to break loose from defenders in a November college football game against Tulane. Anderson helped West Point to a 9-3 record, culminating in a 24-21 loss against West Virginia in the AutoZone Liberty Bowl.
Courtesy of Army West Point Athletics
By PETE JANNY

The 50 miles between Cardinal Hayes High School and the U.S. Military Academy transitions from a busy urban corridor to rural hilly terrain along Palisades Parkway.

There’s a natural ease for embracing the difference in lifestyle between the Bronx and West Point — two places whose only apparent commonality is the state each calls home.

Christian Anderson has seen his journey take him from one milieu to the other — from the Friday night lights at Cardinal Hayes to the Saturday afternoon games in front of his fellow Army cadets. However, Anderson’s success on the football field has not made him take for granted where he comes from — where he hopes his talents at quarterback will take him.

Anderson completed his junior season on an Army football team last fall, leading his team to a 9-3 record before losing on New Year’s Eve to West Virginia by a single field goal at the AutoZone Liberty Bowl in Memphis, Tennessee. In his bowl debut, the Riverdale native rushed for 84 yards in what amounted to a final audition of sorts to be Army’s starting signal caller heading into next season.

Anderson has come a long way since Cardinal Hayes. In his senior year there in 2016, he threw for 3,653 yards, leading the Cardinals to the state championship game. He also earned first-team all-state honors from the New York State Sportswriters Association.

“I still have a relationship with all the coaches there and the administrative people,” Anderson said. “I still have a great connection and definitely miss a bunch of my teammates from there. I still keep up with how they’re doing in college.”

Now four years later, Anderson and his Army teammates endured an unconventional season, while their families rooted for them back home, unable to attend any games due to COVID-19 restrictions. It wasn’t an easy adjustment.

“It was a challenge to remain focused in case a player tested positive or a game got canceled,” Anderson said. “You have to keep all the guys focused and not discouraged, so that was a big testament to the senior leadership we had, and the coaches.”

Anderson opened the season leading his team to a 2-1 start, beating Middle Tennessee State and Louisiana-Monroe at home before falling to nationally ranked Cincinnati on the road. He racked up 98 yards on the ground and scored twice against Louisiana-Monroe, marking the second time in his college career Anderson rushed for multiple touchdowns in a game.

Yet, Anderson’s path to playing time at West Point was a windy one, oftentimes finding himself getting lost on the depth chart for a program notorious for rostering a glut of quarterbacks.

He didn’t play his first two seasons at all. Anderson moved to the playing field in 2019, appearing in six games while still only a sophomore from an eligibility standpoint.

Last year saw him start to turn the corner as everything seemed to fall into place. The starting quarterback job was seemingly Anderson’s to lose.

But the 55-23 win against Abilene Christian in October was bittersweet for Anderson, suffering an injury that sidelined him for more than a month. Even with rehab, there were no guarantees he’d have any playing time upon his return. Adding to his bind was the stress of the academic semester and being away from his family, something that almost pushed Anderson back to square one.

“It was difficult because I felt I had a lot of injuries that happened back to back,” he said. “It helped having my teammates there and they trusted me to get back to my form and come back better.”

Through patience and perseverance, Anderson returned behind center on Nov. 14 at Tulane. Despite running for a touchdown, Army came up short in a 36-12 loss.

The Black Knights bounced back by winning the last three games of the season, highlighted by a 15-0 win over archnemesis Navy.

Anderson didn’t play that game, but knows exactly what the rush of emotions feels like after starting against Navy in 2019.

“It’s always good to play good competition and play against your rival,” Anderson said. “Navy was my first start at West Point, and scoring in that game was amazing knowing so many people were watching that game.”

He returned to the field a week later against Air Force, zipping for 85 yards in a 10-7 win that clinched the Commander-in-Chief’s Trophy. It was a classic example of the run-heavy style of football that Army prides itself on, and proved to be the final hurdle in clinching a bowl game.

But it’s not all football for Anderson. Right now, he’s studying systems engineering, yet other possibilities outside of that major are beginning to cross his mind once his collegiate playing career comes to a close.

“Honestly, right now I think I may end up being a coach, and that’s something I’m really passionate about,” Anderson said. “I know obviously that doesn’t have much to do with my major, but if coaching doesn’t work out, then I’ll be able to do whatever I want with my major.”

First, he must prepare for his senior year on the gridiron. His personal workout plan enlists the help of someone special — his father, Robert Earl, pastor of Shekinah Glory Worship Center in Harlem. Anderson says their regimen includes plenty of weightlifting in their makeshift gym at home, making for a good balance between staying safe and staying fit during the days of staying home.

Anderson spent most of the pandemic at home with his family. Getting that time was important for him, especially after both parents contracted COVID-19, but have since recovered. As for his little brother, Anderson kept him busy by playing a lot of video games, an activity they love bonding over.

During his visits back to Riverdale, Anderson feels as if he never left the city. It’s enough to keep him grounded.

“It’s a nice area and I feel like everybody is pretty nice,” Anderson said. “I’ve met a bunch of people just playing at the park or going to The Riverdale Y, and they’ve always been good people to me. They still keep tabs on me on how I’m doing here.”