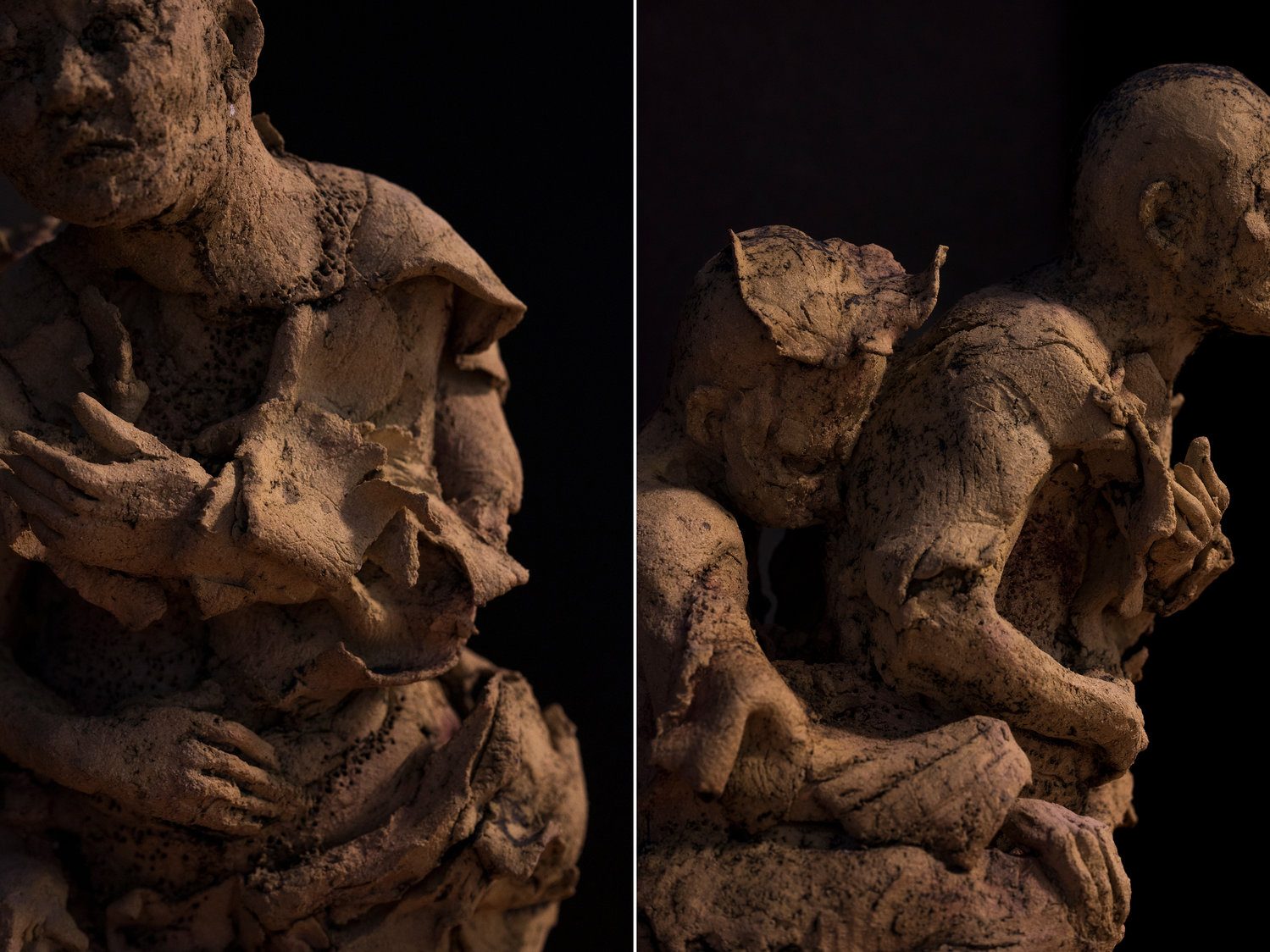 Gloria Nixon-Crouch created a 12-inch month long clay statue that has helped her express her feelings on Russia’s invasion of Ukraine. Her neighbor shared her artwork on a Facebook page catering to people living in and around Riverdale and Spuyten Duyvil. She is selling the piece to donate to the Ukrainian Crisis Relief Fund.
Hiram Alejandro Durán 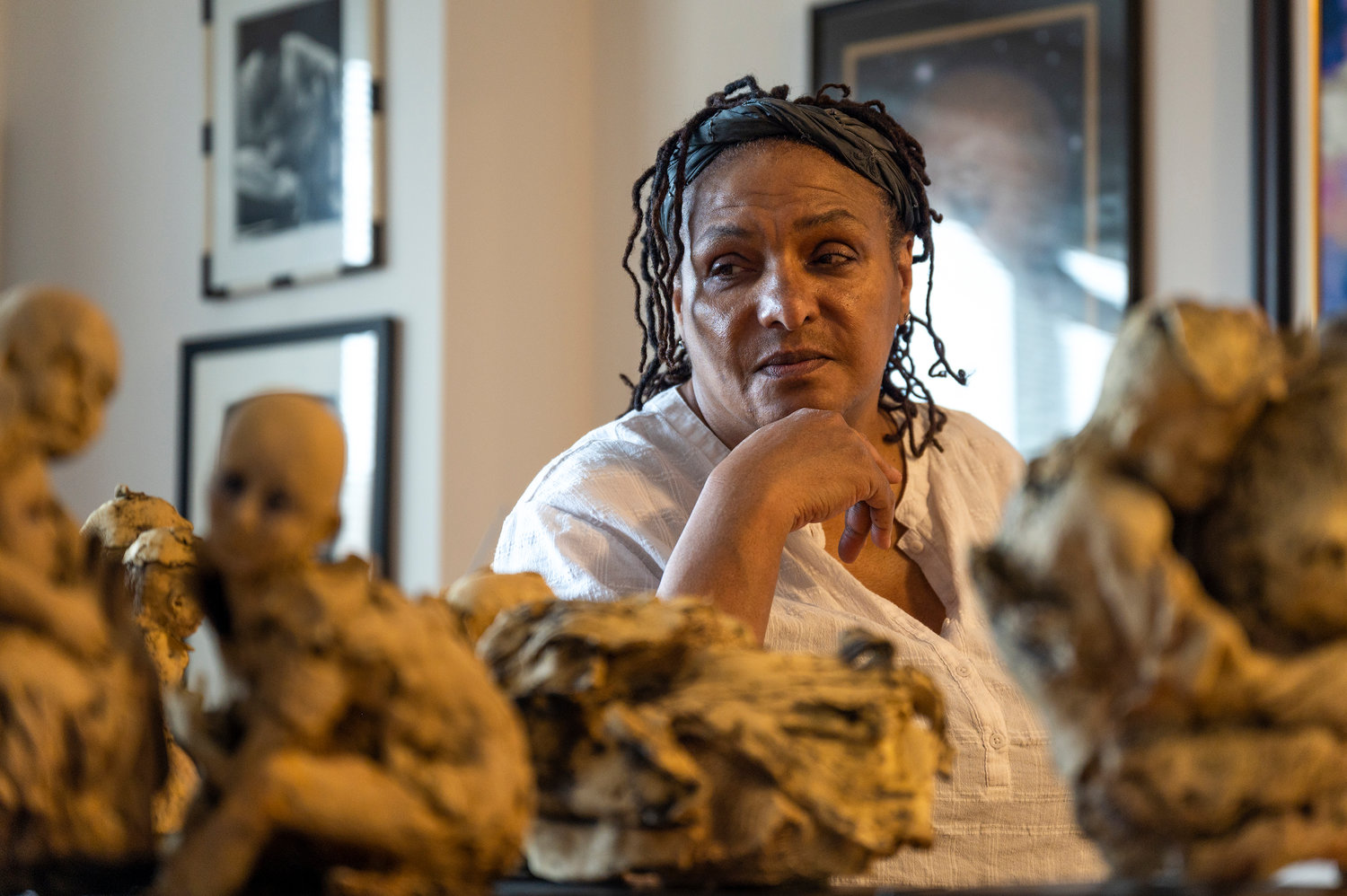 Artist Gloria Nixon-Crouch was influenced by the explosion of the creativity from the 1960s through the ‘90s. As a teenager, Nixon-Crouch found herself at the epicenter of the artistic movement — Greenwich Village. Her sculptures are all made of clay, and have been exhibited in various venues throughout the United States, including with Iona College in New Rochelle.
Hiram Alejandro Durán 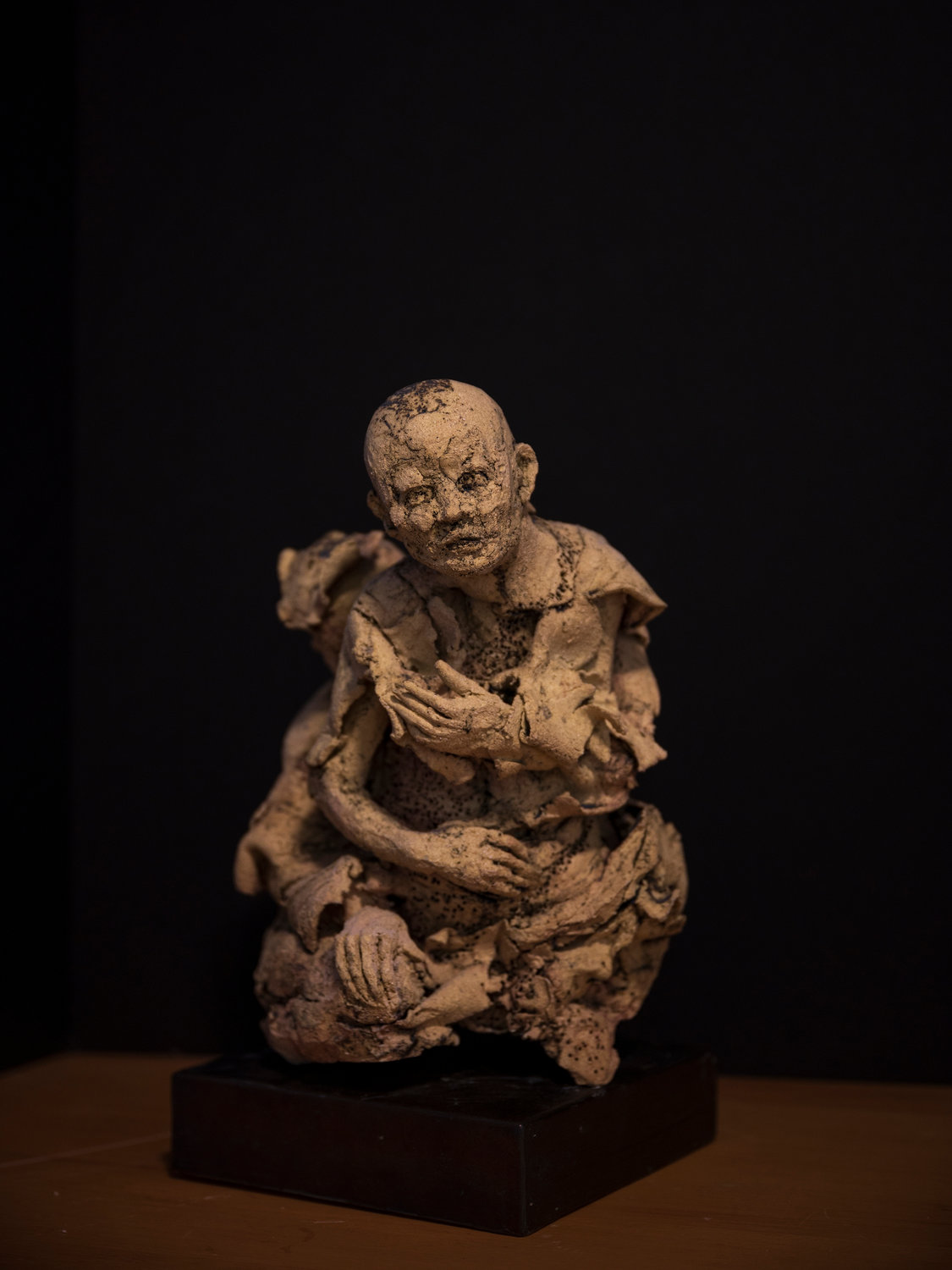 Gloria Nixon-Crouch’s sculpture, ‘The Pain of Ukraine,’ can be experienced in different ways. However, when it comes to depicting Russia’s invasion of Ukraine, Nixon-Crouch sees that suffering from the Ukrainian people is transferred from the statue to the viewer.
Hiram Alejandro DurÃ¡n
Previous Next
By STACY DRIKS

When Gloria Nixon-Crouch saw the news reports of Russian troops amassing at the Ukrainian border, she feared the worst for the people living there.

After President Joe Biden made it clear war in that part of Europe was imminent, the ceramic artist turned to sculpture. She imagined what the Ukrainians there must be feeling, and their pain. Nixon-Crouch felt helpless so many thousands of miles away, but found a way at least to express her emotions with a 12-inch statue she aptly called, “The Pain of Ukraine.”

“My work basically speaks about the pain that people experience through atrocities like this,” Nixon-Crouch said. “Not only Ukraine, but atrocities that happened through centuries.”

Little did the Spuyten Duyvil artist know how much this piece of art from a former art teacher would resonate on social media. A Facebook post caught the attention of her longtime neighbor Don Appel. He shared it with other Facebook groups, and insisted she put out a news release to share what she’s created.

The world is suffering through an emotional time, he added, and the sculpture is a piece of that time.

Appel, a psychotherapist, works with combat veterans and anyone who has actually experienced war. He’s heard stories firsthand from his patients.

“When I saw it on Gloria’s Facebook page, I was just bowled over,” he said. “It talks about pain in so many dimensions.”

Nixon-Crouch’s sculpture shows two figures — a man and a woman — hugging from behind. One rests their head, while the other holds their arms.

As an artist, Nixon-Crouch leaves it up to the viewer to decide who is who. As for the hug itself, that can be interpreted in different ways — loss, leaving one another for shelter. Or even representing Nixon-Crouch’s version of protection.

“The female is holding on to the male who’s in floods, (outburst of tears or emotions) who’s forging on in a protective way,” Nixon-Crouch said.

The sculpture is purposely fragmented to create a visual anarchy, Nixon-Crouch said. It’s her way of capturing external destructions and internal decay. Without using glazes it represents timelessness.

Nixon-Crouch’s work represents a new version of destruction. And the two subjects in her sculpture are uncertain of their future, despite what they hope. One of them knows they will protect the future.

“It’s very disturbing to me,” Nixon-Crouch said about war. “I really am literally in pain.”

The world had witnessed the ugly side of war. More than 2 million have fled — leaving spouses, parents and family members behind to fight the Russian invaders. They seek refuge in nearby European countries.

Ukrainian president Volodymyr Zelenskyy has called on all men between 18 and 60 to stay in the country and fight.

“I look at the news, and I see these people with their children and children that have been killed,” Nixon-Crouch said. “You just say to yourself, how can he (Russian president Vladimir Putin) do this?”

She created “The Pain of Ukraine” while working out of her Westchester studio.  The process to work with clay can be tedious, sometimes taking up to a month to finish.

Nixon-Crouch was influenced by the Greenwich Village art movement that began in the 1960s. She earned a bachelor’s degree in art education from Hunter College and a fine art degree from Pratt Institute.

Nixon-Crouch picked up her master’s degree from Fordham University in 1989, and would spend nearly 35 years in the New York City public school system teaching art and adult education.

She was married to the actor, playwright and cultural critic Stanley Crouch, who died in 2020.

As for her current work, Nixon-Crouch has reached back to her roots as a student of a time when artists were influenced by the civil rights politics of the late ‘60s and ‘70s that changed the world. That is what drove Appel to share her work with the rest of today’s world.

“Gloria’s piece connects with that thing” affecting people, he said, “It kind of crystallizes the pain and takes it from just an emotion to something that we can see.”