As evictions skyrocket, nary a lawyer found

Since moratorium ended, city program to help tenants can’t keep up with capacity 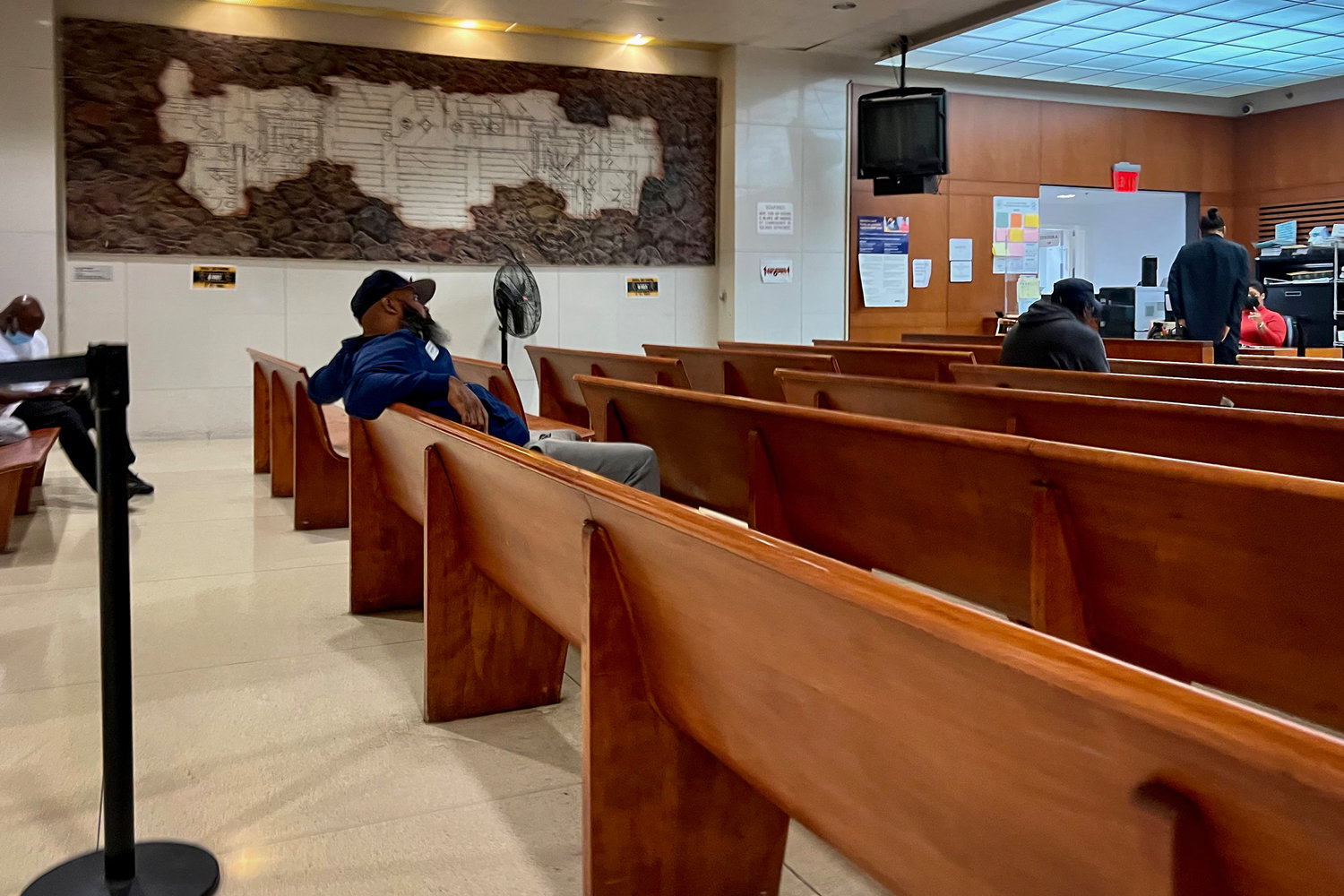 A man waits to speak with a court clerk in Room 230 at Bronx Housing Court, a large courtroom converted into a help center and outfitted with video conference stations for virtual intake in eviction filings. The room had mostly quieted down by 4 p.m. on Sept. 7.
ABIGAIL NEHRING
By Abigail Nehring

Since September, the rate of representation has hovered in the single digits, according to an analysis of court records by a ragtag team of data analysts with the Association for Neighborhood and Housing Development and the Right to Counsel Coalition.

The project has been in the works for four years, said ANHD’s Lucy Block. “This shows the many, many people falling through the cracks.”

Overall, they found only 39 percent of tenants facing eviction since January have retained attorneys – a grim result for the first real test of the city’s Right to Counsel law.

The 2017 legislation made New York City the first place in the country to guarantee access to legal representation in housing court for tenants earning less than 200 percent the federal poverty level. Other cities have since followed suit.

But a full fleet of lawyers set to begin taking on cases before the moratorium was lifted proved no match against the barrage of eviction filings that soon poured in – about 25,000 across the city so far this year.

The Right to Counsel law leaves much to the court’s discretion. For instance, judges can adjourn cases to give tenants more time to access an attorney.

But when nonprofit firms started falling behind in March, the office of court administration directed judges to push cases towards resolution regardless.

“I’m not going to sugarcoat it – there are a lot of tenants who are not getting representation,” said citywide supervising housing court judge Jack Stoller in a virtual Q&A with Housing Court Answers Oct. 14. “Unless you sign a retainer agreement, you don’t have a lawyer in the case. My understanding of the statute is everyone gets advice, at the very least. I think that there are a lot of tenants who are getting advised by attorneys, but do not have an attorney put in a notice of appearance for them.”

A full accounting of Right to Counsel’s rollout has taken place annually in reports by the office of civil justice, which oversees the program. But the administrative arm of New York’s court system releases court data weekly.

Since January, 15,300 households have faced eviction in city housing courts without a lawyer, according to the findings co-published Thursday on ANHD’s website and Right to Counsel NYC’s eviction crisis monitor.

The data dwarfs figures provided to The Riverdale Press by New York State Unified Court System spokesperson Lucien Chalfen, who offered some possible explanations for the discrepancy and a surprising rebuke to the analysts’ methodology.

Since March, Chalfen said, nonprofit law firms have declined 7,300 cases scheduled for intake where they lacked the capacity to participate.

“We only began tracking provider participation in intake court sessions starting in March 2022 when a provider first refused [a case] due to their inability to supply attorneys,” he said.

“Since that time, providers have handled intake with a hodgepodge of approaches.”

Block said the 7,300 figure “leaves a lot of open questions.”

But Chalfen had a few questions of his own for the ANHD team, and they took them to heart.

On Tuesday, ANHD tweaked their methodology, so the data reflected a snapshot of cases at a slightly later stage in court proceedings. The result is the slightly more conservative estimate of 15,300 cases where tenants are unrepresented rather than the 17,000 originally reported.

All said and done, “maybe the office of court administration wants to collaborate on an analysis,” Block said. “I’ve been analyzing this data for years now. We’re not provided any context for the data. Agencies don’t set up their data to be analyzed.

“After all this time, there’s still a lot of uncertainty and lack of clarity, so it would be really, really helpful for OCA (office of court administration) to commit to transparency, including making the data accessible and collaborating to make sure everyone can analyze it.”