As of March 1, new rules for shoppers are in the bag 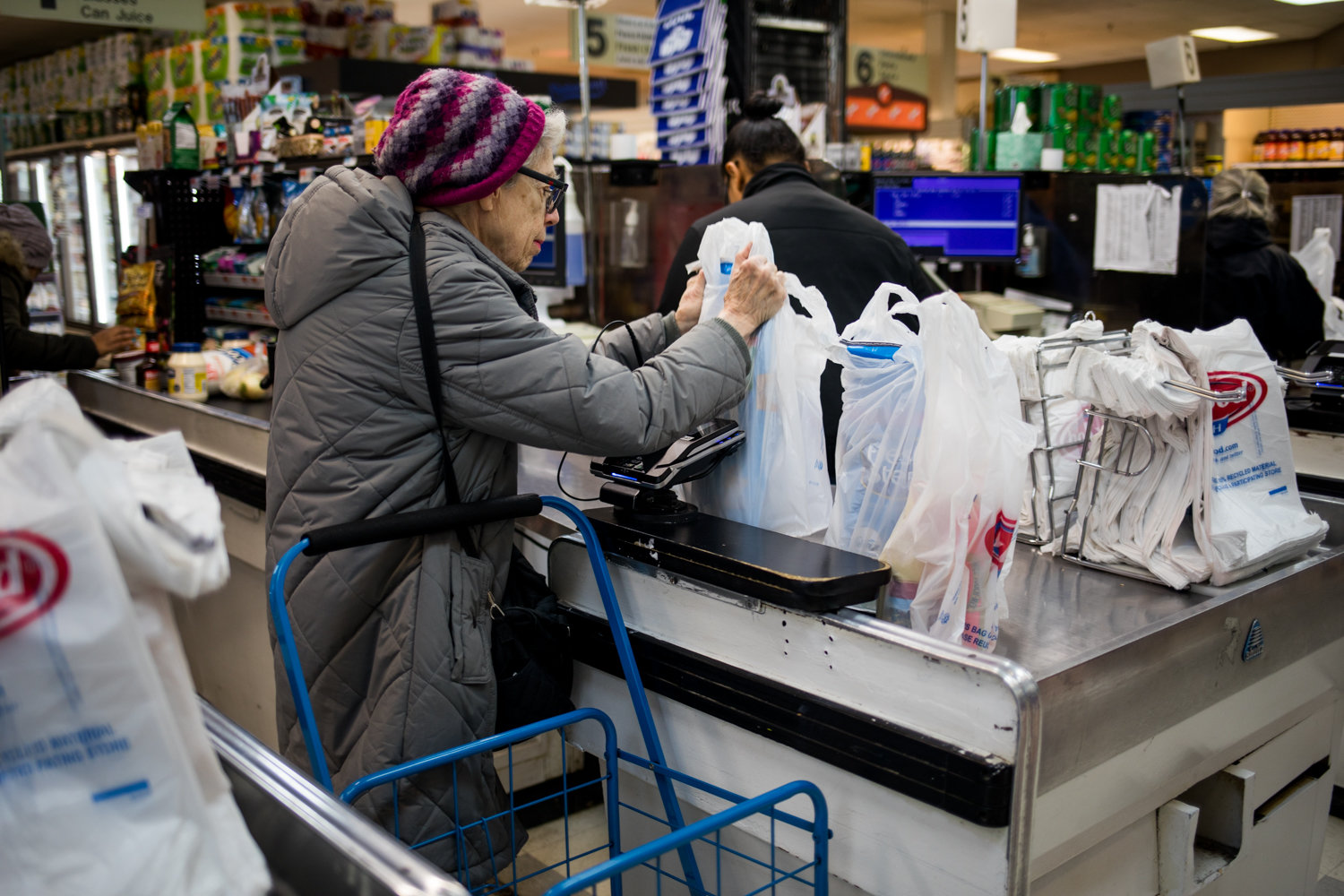 Stores like Key Food will soon have to make the switch to paper bags from plastic once the statewide ban on single-use plastic bags goes into effect March 1.
JULIUS CONSTANTINE MOTAL / File 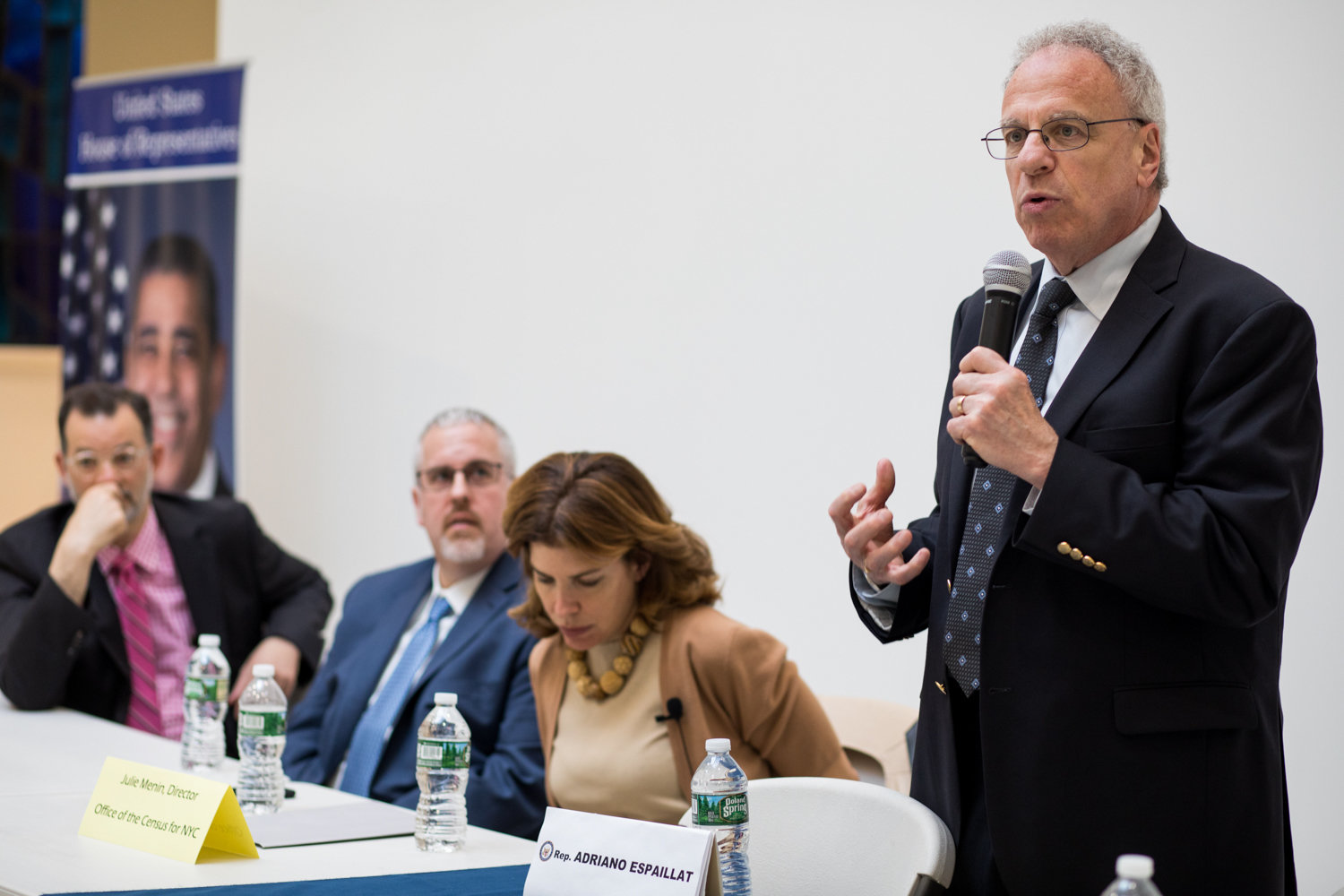 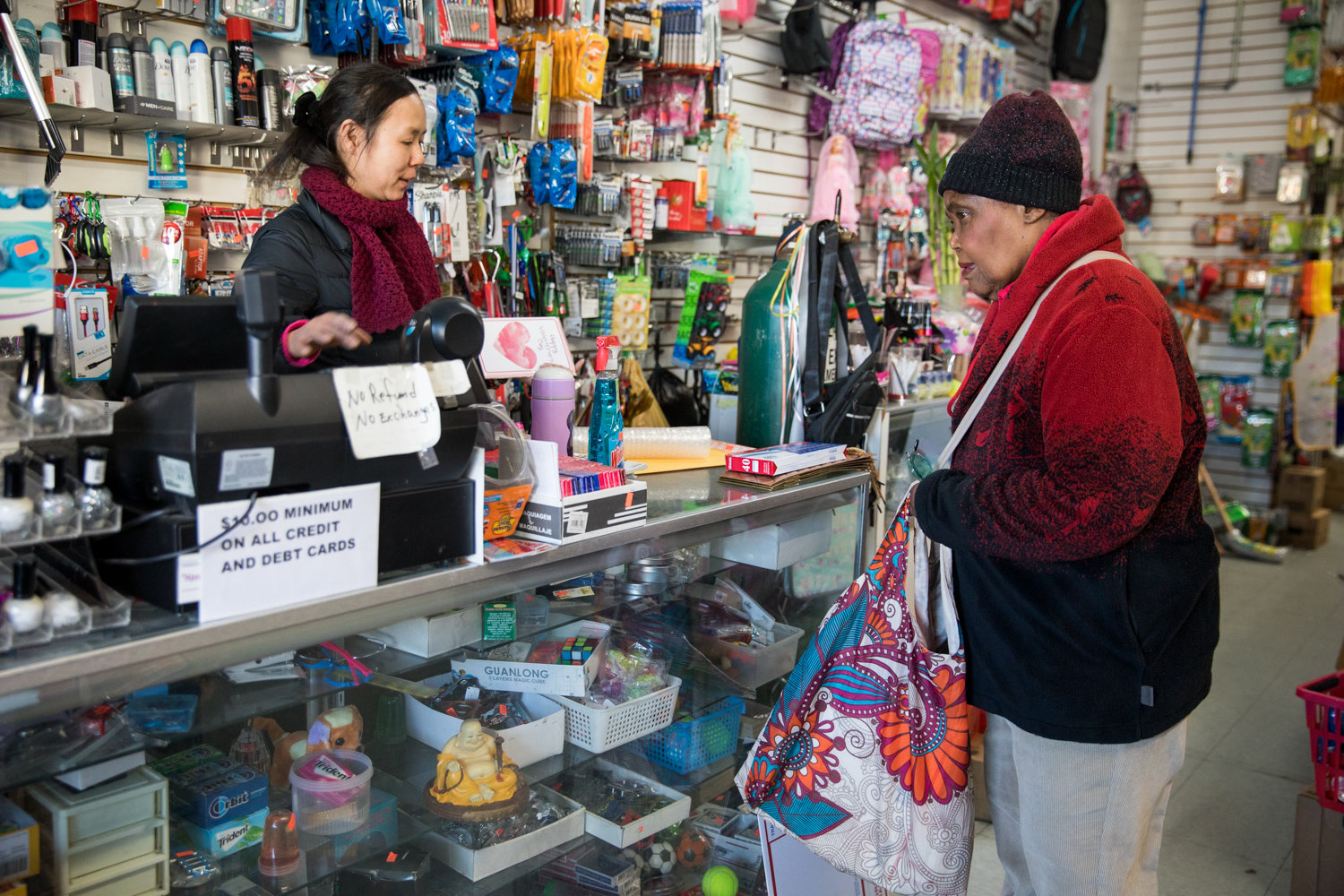 Kay Lin rings up Carole Bythewood at Family Discount on Riverdale Avenue. Bythewood feels the plastic bag ban that goes into effect March 1 is a good thing, and to that end, she brings her own reusable bags when she goes shopping.
JULIUS CONSTANTINE MOTAL 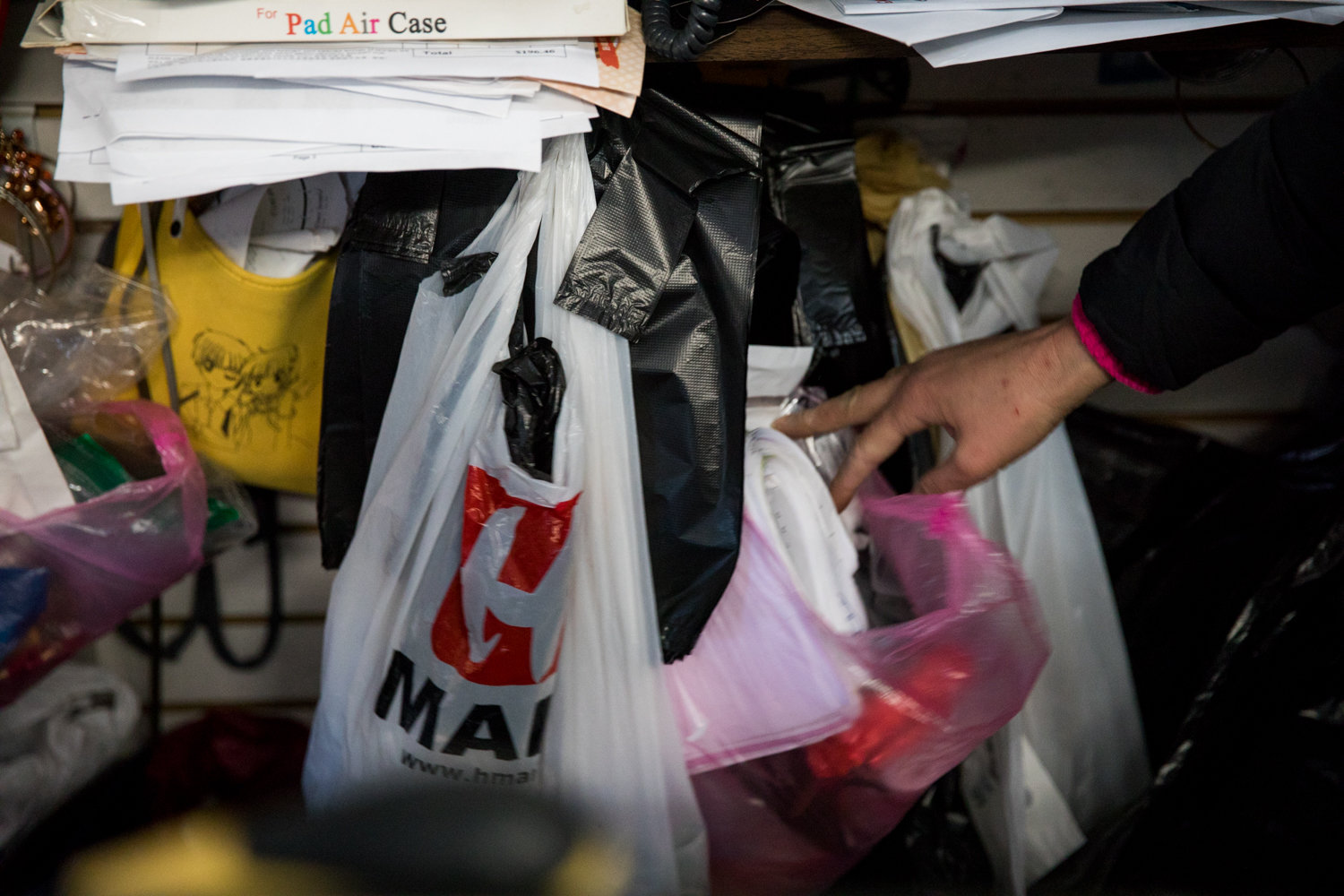 Kay Lin isn’t worried about having to make the switch to paper bags at Family Discount on Riverdale Avenue. The purchases at her store tend to be small, and some of her customers simply carry them out. Others bring their own bags.
JULIUS CONSTANTINE MOTAL 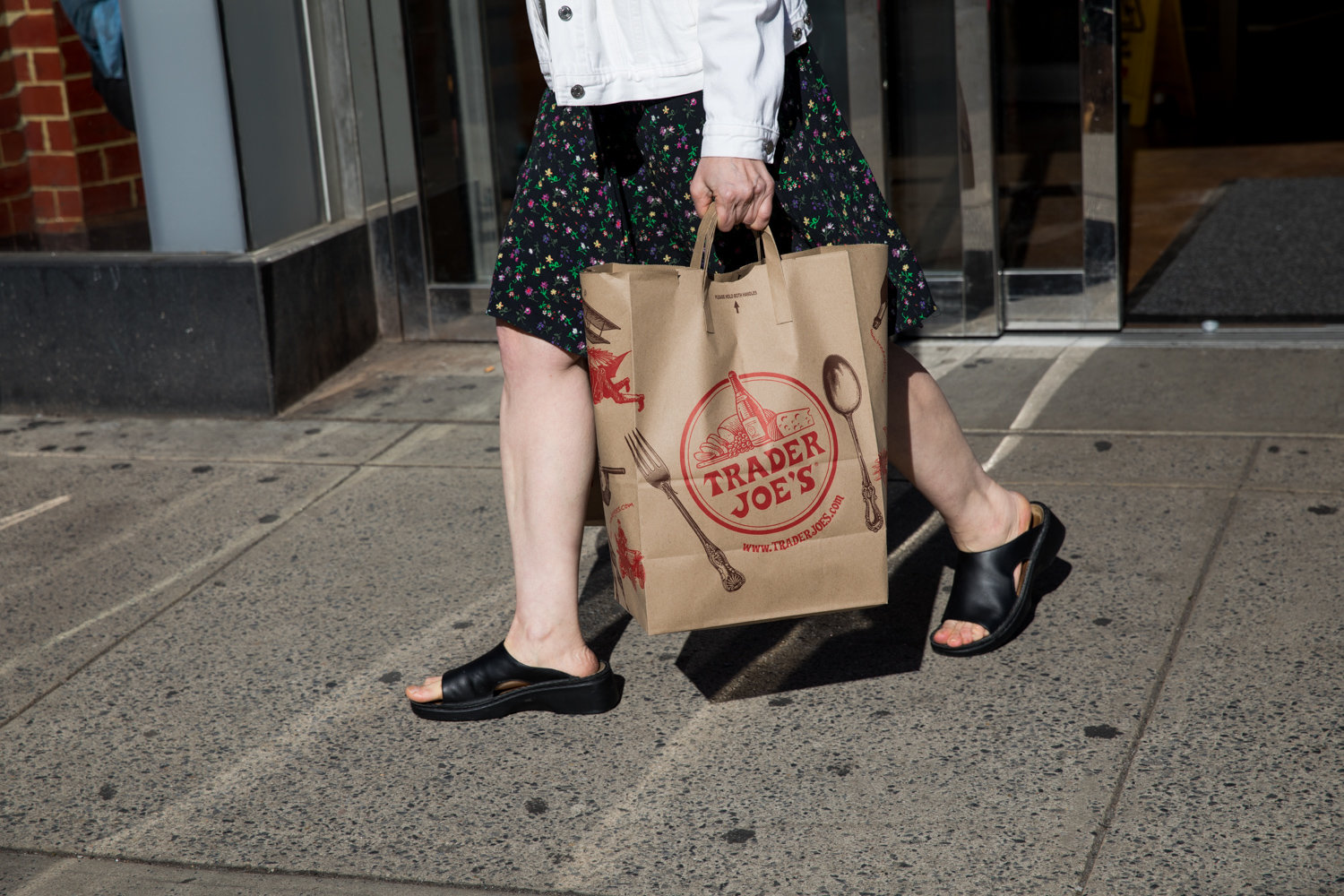 Trader Joe’s is in some ways the standard-bearer for high quality, durable paper bags. With the statewide plastic bag ban set to go into effect March 1, retailers will have to make the switch to paper bags, though they will not be of the same quality. Outlets like Trader Joe’s have contracts with manufacturers to produce their bags.
JULIUS CONSTANTINE MOTAL / File 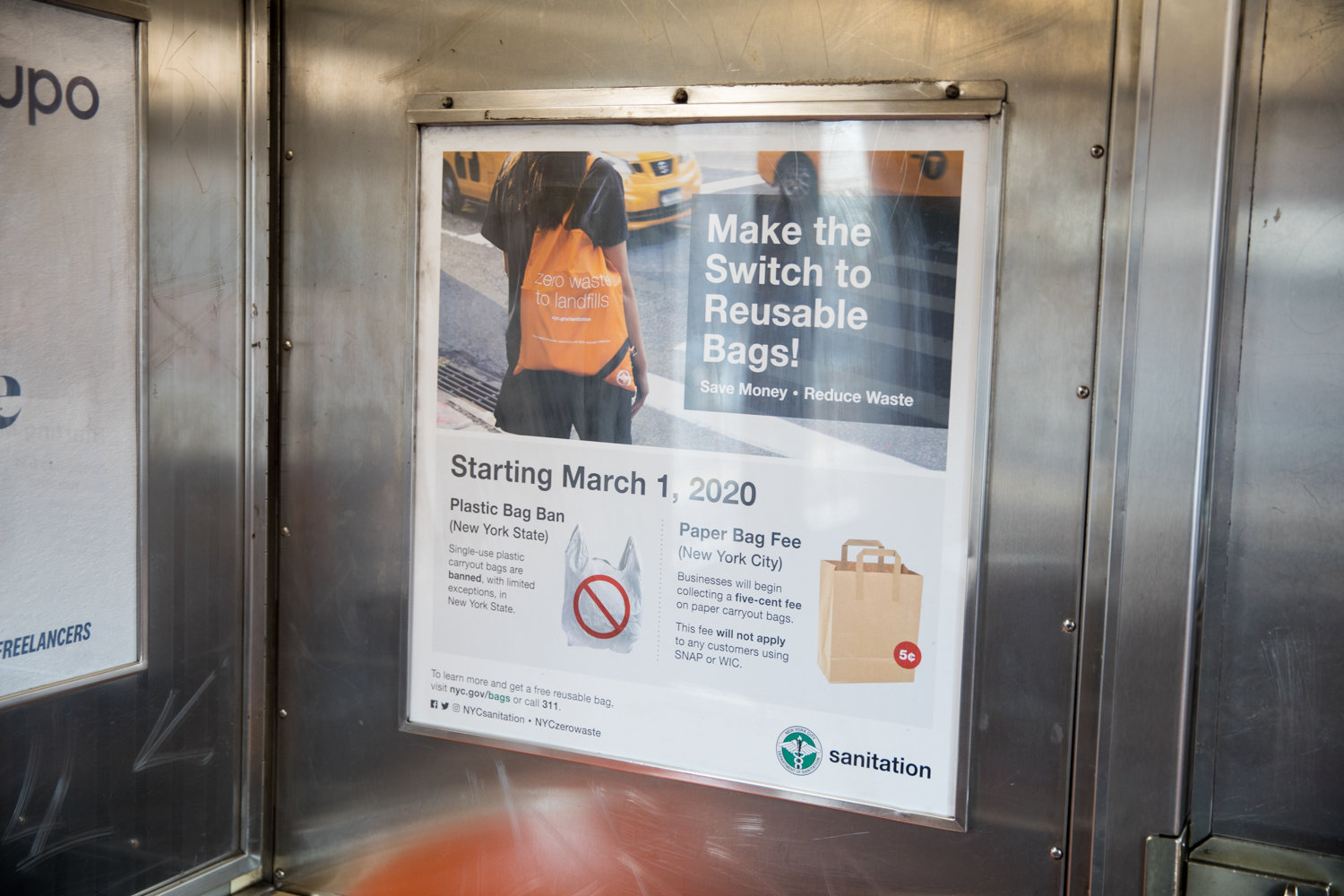 A sanitation department poster on a 1 train encourages people to make reusable bags a part of their daily lives, since plastic bags will soon be banned — with some exceptions — starting March 1.
JULIUS CONSTANTINE MOTAL
Previous Next
What’s the big deal about plastic bags?

On March 1, the state will attempt to wean itself off single-use film plastics by banning certain plastic shopping bags. It’s not a perfect plan — it has loopholes decried by environmental groups — but it could potentially curtail the amount of plastics ending up in landfills, parks, waterways and other natural areas.

Not all bags are included in the ban. Reusable bags meeting certain physical criteria are exempt, like the gossamer-thin bags a butcher might use, for example. Environmental groups criticized the state’s decision to exempt thicker plastic bags, believing stores could exploit a potential loophole by simply using thicker bags the state would otherwise deem “reusable.” The state’s definition of truly reusable bags is a minimum lifespan of 125 uses able to carry at least 22 pounds over 175 feet.

New York isn’t the pioneer here. First was Hawaii, which in 2011 forbade retail stores on islands with the highest population density from providing plastic film bags. California’s ban passed its state legislature in 2016. Connecticut, Delaware, Maine, Oregon and Vermont are enacting restrictions on bags, plastic straws, and some single use plastic containers beginning this year.

The state’s ban followed a 2018 report by an environmental task force charged by Gov. Andrew Cuomo to assess the damage plastic film bags do to waterways, aquatic life and wastewater treatment facilities.

The average American household uses 1,500 plastic bags each year, according to the report, each one getting about 12 minutes of use. Many bags are made from fossil fuel derivatives, requiring more than 12 million barrels of oil each year to meet demand.

Recycling these thin film bags is difficult. Thicker polyethylene is easily processed, according to the report. But bags jam equipment — just a few bags can snarl equipment for hours, or days.

Paper bags are not without their own environmental qualms. Paper can’t be made without cutting down trees, and also are typically used once before being tossed in the trash.

Some experts predict most people will pony up the extra 5 cents per bag instead of bringing their own, according to the New York Post, leading to a mass shortage in brown paper sacks. But don’t expect all of them to be the thick paper ones with the attached handle — many of those are supplied exclusively to large grocery chains like Trader Joe’s.

Paper bag manufacturers reportedly said the shortage could last up to five years until more factories are up and running.

Winter’s barren branches are never truly empty as chill winds howl. Gone are the gentle, rustling leaves filtering soft green light upon the lawns (or concrete) below. But the Bronx instead has the tattered, flapping, tree-dwelling shopping bag to grace the otherwise arboreal wasteland.

Didn’t bring a sturdy, insulated reusable bag to fill? Some stores will still offer paper bags, but they’ll cost you — 5 cents each — unless the buyer receives government food benefits. Those fees will fill the state’s environmental protection fund and help provide people with free reusable bags.

Customers will still be able to buy reusable bags in stores where available, although the total cost for enough to fit a big grocery run is unclear.

The ban’s been on the backburner for a few years. Pundits and environmental experts have taken sides, chewing the subject to a fine pulp. Now, it’s finally become state law.

Yet it’s hard to know precisely how much has sunk into the public consciousness. Paying for paper bags when plastic has been a given may throw thousands for a loop. But then some people have been carrying their own for years.

“I think it’s a good thing,” Carole Bythewood said, tucking items into her reusable bag as Family Discount manager Kay Lin rung them up at the register. “I always carry one or two with me when I go out.”

In fact, most of the cozy Riverdale Avenue 99-cent shop’s customers either have their own bag or buy only enough they can slip into a purse or pocket once they’ve paid, Lin said.

A few extra paper bags might not cut it for some stores. Not everyone carries extra bags with them. Popping into the corner store for milk and bagels as a post-work afterthought may necessitate buying a bag rather than juggling several items during a commute.

He estimates only about 5 percent of his customers currently carry their own reusable bag when they come to his store to shop.

But once people adjust to the change, they’ll remember to bring something along just in case, said Assemblyman Jeffrey Dinowitz. Promotions give away bags all the time, and their newfound necessity will make them more widespread.

“In fact, I’ve been building up my stack of those canvas bags for a long time now, almost to the point of being a hoarder,” the lawmaker said. “I have a lot of them there in my closet at home. They’re in my trunk.”

Humanity survived until about 40 years ago without the one-use plastic bag, Dinowitz added, and it’ll be just fine without it.

“I remember as a kid, my mother going to the grocery store with fabric bags,” said Kingsbridge Business Improvement District director Katherine Broihier. “As we get older, it became the paper grocery bags. And now every place has plastic.”

She’s not heard much consternation from the district’s retailers. Most stores have signs posted, letting customers know things change March 1.

“The problem is some of these business owners, for some reason, believe they can charge whatever they want,” she said. “So in addition to the five cents a bag, I’ve heard one store said they’re charging 10 cents.”

But that’s not allowed under the state law. The fee for paper bags is only for counties who opt into the environmental fund. Any money collected goes to the state, not back to the store’s coffers.

While some are approaching March 1 with trepidation, some locals hail the ban as the solution to discarded bags spending years in trees, choking streams, and causing wild animals slow and painful deaths.

The Hebrew Institute of Riverdale’s green team led by Ann Rauch has collected more than 600 pounds of film plastic over the last year, taking them to the Broadway Stop & Shop grocery store to recycle instead of sending to the landfill.

“Even though there will be fewer plastic bags around because of the ban, there are still lots of plastic film still being used by people every day that can be recycled,” Rauch said.

There are several kinds of plastic film products exempt from the ban that are just as recyclable. The shrink wrap holding packs of household products together, restaurant take-out bags, food storage bags, mail padding, cereal bags — there are lots of plastic film that doesn’t have to end up in the trash or littering natural areas.

“It’s hard to find anything in stores that aren’t wrapped in plastic,” Rauch said. “It’s been our goal to educate people how much plastic one household can generate, and to find ways to reduce the amount we use.”