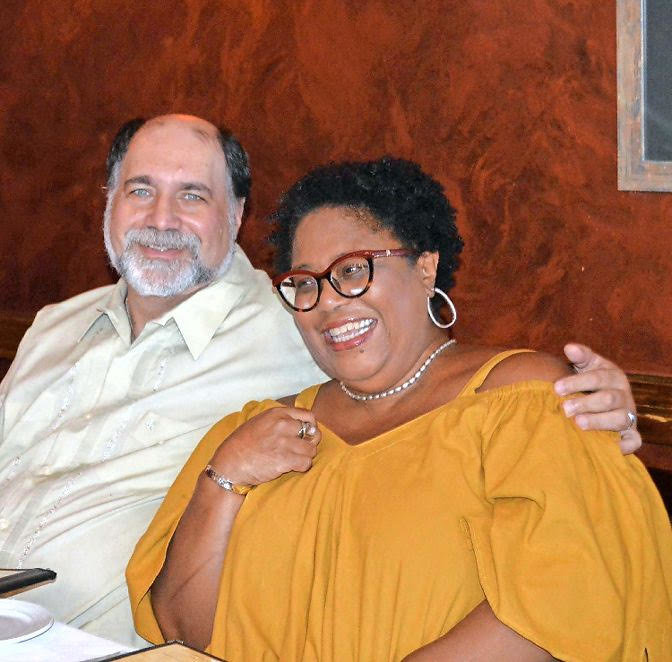 Dahlma Llanos-Figueroa, right, worked with husband Jonathan to take part in ‘Artists After Maria,’ an art exhibition from this past fall showcasing and presenting how Hurricane Maria affected the lives of Puerto Ricans on the island and abroad. Recently, Llanos-Figueroa has searched for a publisher to share her new novel, ‘A Woman of Endurance.’
Courtesy of Jonathan Lessuck 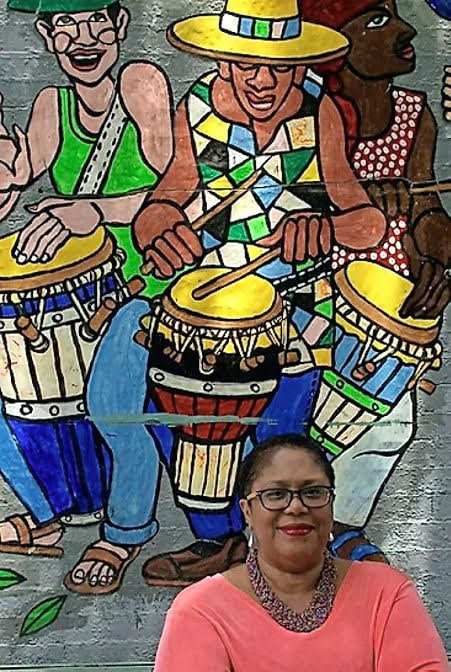 Dahlma Llanos-Figueroa, author of ‘Daughters of the Stone,’ was nominated for the PEN/Robert W. Bingham Prize in 2010. Since then, Llanos-Figueroa has continued her passion of telling stories in a voice she feels is disregarded: The voice of an Afro-Puerto Rican woman in the Bronx.
Courtesy of Orlando Gonzalez 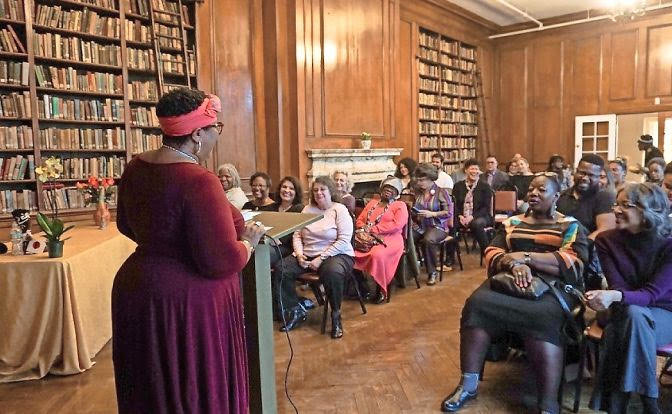 Dahlma Llanos-Figueroa, left, reads an excerpt of her PEN/Robert W. Bingham Prize-nominated novel ‘Daughters of the Stone’ on its 10th anniversary, which was released in paperback last year.
Courtesy of Isabelle A. Cotte
Previous Next
Where can you get it?

Dahlma Llanos-Figueroa's 'Daughters of the Stone,' a Pen/Robert W. Bingham Prize finalist novel, is available for purchase on her website: DahlmaLlanosFigueroa.com. Also available are excerpts from her new novel, 'A Woman of Endurance.'

They said the Bronx was burning in cop movies, on the news, in history books.

To them, it was only ruins and fire, violence and risk, and evidence of urban collapse. To an outsider, the Bronx could simply seem hopeless. But for those who called the borough home through that time, there is a different story to tell.

Through childhood and adolescence, Llanos-Figueroa lived in El Barrio, in South Bronx tenements, on White Plains Road, and even back in Puerto Rico for a time with her grandparents.

She grew up around bustling extended family, raised by the city and its public school system, her nurse mother and accountant father, and school friends who came and went, before departing for college at SUNY Buffalo.

When she graduated, Llanos-Figueroa moved to a place that reminded her of suburban Buffalo.

“In the late ‘70s, I came to Riverdale as a young professional,” she said. “Been here for 44 years. I consider my time in Riverdale to be what I call the gradual greening of my life. It’s when I worked as a young adult librarian, retired, and turned to writing.”

When she was younger, Llanos-Figueroa didn’t believe her stories had any worth, as she considered her life uninteresting.

Yet, when she put pen to paper and emerged onto the literary scene in the 1990s, she found an astonishing space where accounts like her own were needed.

“As I matured, I understood that we all have stories to tell,” Llanos-Figueroa said. “But for an Afro-Puerto Rican woman and women, our stories were not being told. And if they were, they weren’t being told by us. I felt it was a niche necessary to fill.”

As a self-described “product of the Bronx,” her home borough is where early recognition for her short stories and memoir sketches began. In 1995, she received the Artists for Community Enrichment Award from the Bronx Council on the Arts, and was invited to attend the Caribbean Writer’s Conference that same year. As the years went on, Llanos-Figueroa considered it necessary to take part in another local contribution to literature: the Bronx Memoir Project.

“After I did a few workshops with the council, I heard what the memoir project was doing,” she said. “So much of it contributed to the voices of the people that live here in a way that no one else was really paying attention to.”

For decades, Llanos-Figueroa has cultivated and nurtured the literature of the borough, from herself and fellow voices she feels are otherized, voices she feels are hidden away and disregarded. In 2009, she published her debut novel, “Daughters of the Stone,” chronicling five generations of Afro-Puerto Rican women, reaching from the sugar plantations of colonial Puerto Rico to the streets of New York in a time of great cultural, political and social upheaval.

The scope and goal of Llanos-Figueroa’s work, along with a writing style regarded as lyrical, powerful and intricate, drew the attention of the PEN/Robert W. Bingham Prize, which named the novel a finalist. Through writing, Llanos-Figueroa hopes to provide the world with a voice too often ignored.

“The Black Lives Matter movement, the dreamers, the LGBTQ youth, these are the others,” she said. “But to us, we’re not the others. We’re us. I look out and see that a change is needed. Some of our white neighbors are taking part in that. I was around in the civil rights movement, the successes of which were eroded over time — some very recently. As a writer and as an elder, the stories I have to tell might help the new generation achieve something. These new voices are needed.”

Llanos-Figueroa is looking for a new publisher to share one of those stories. “A Woman of Endurance” concerns a slave woman purchased to be a breeder, and the reflections on the harm caused by such an experience to an individual human being, and to the history of the matter.

Such a difficult and painful subject may inspire aversion to that kind of story, according to Llanos-Figueroa, but that reaction is missing something important.

“A lot of our history is sad, uncomfortable,” Llanos-Figueroa said. “If we’re going to reach a state of something better, we’re going to have to get through that discomfort.

“I do not write hopeless novels. I am here, so I can’t be hopeless.”