After four-alarm blaze destroyed shops, the owners do not know what is next 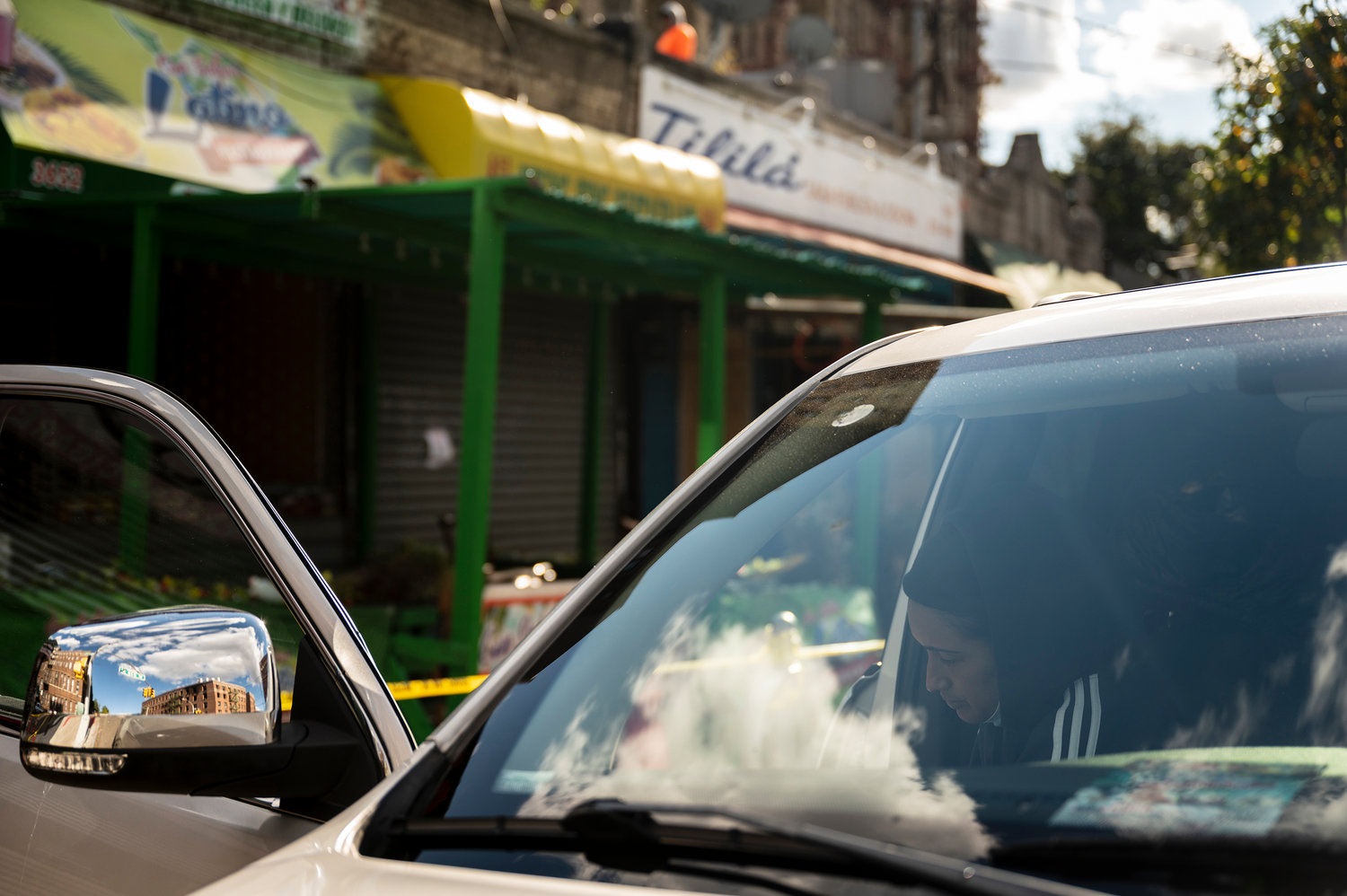 Ada Rosario sits in a car outside of Con Sabor Latino at 3652 Bailey Ave., where her family business existed before it was extensively damaged by flames. Rosario is waiting to hear back from the landlord whether they can return before the year is over.
HIRAM ALEJANDRO DURÁN 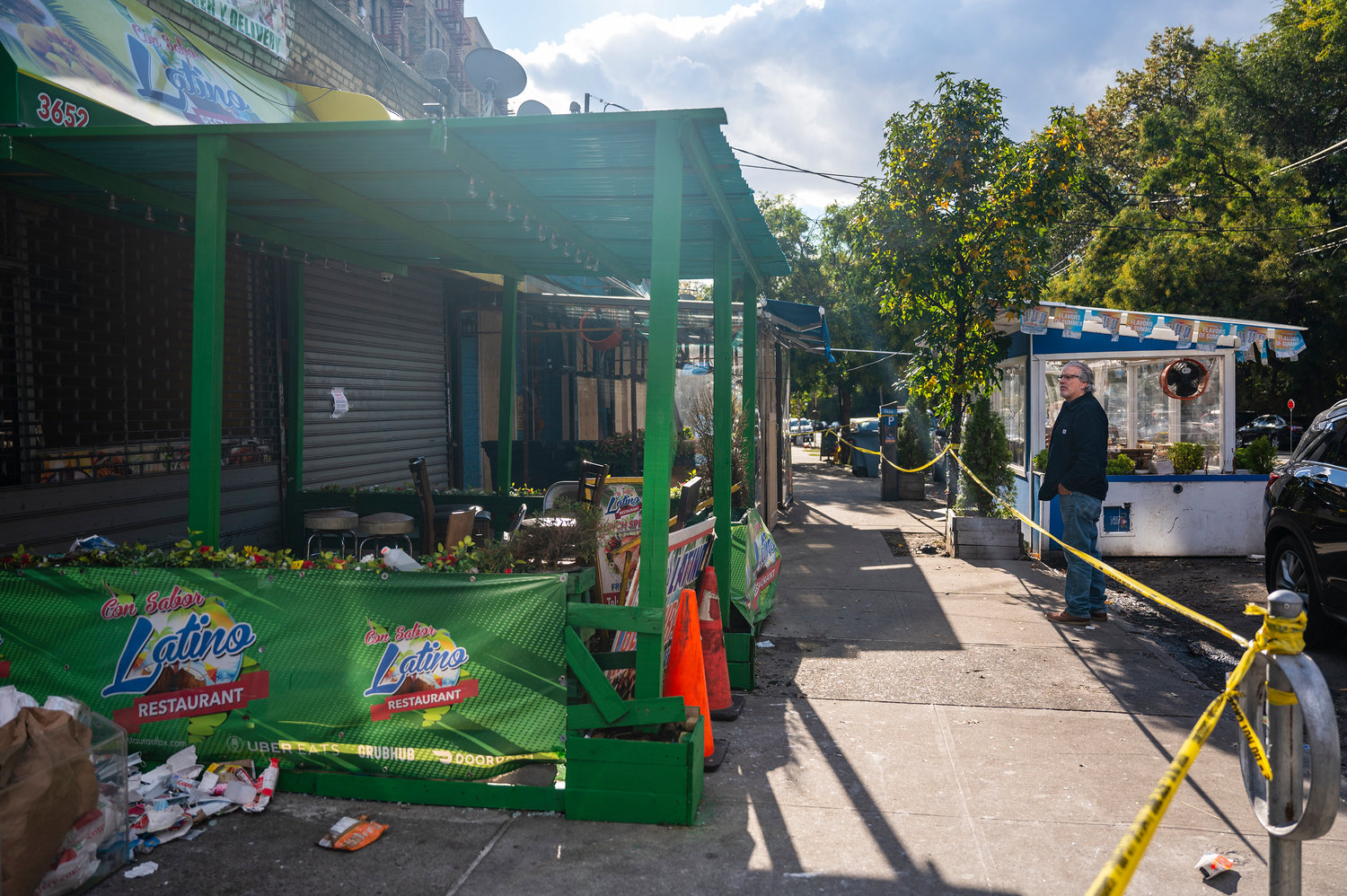 A four-alarm blaze ravaged several businesses along Bailey Avenue near West 238th Street just weeks ago. It’s the second fire in the past month or so on the block. Last September, firefighters responded to a two-alarm blaze across the street at 181 W. 238th St., where one resident died and another was hospitalized.
HIRAM ALEJANDRO DURÃN 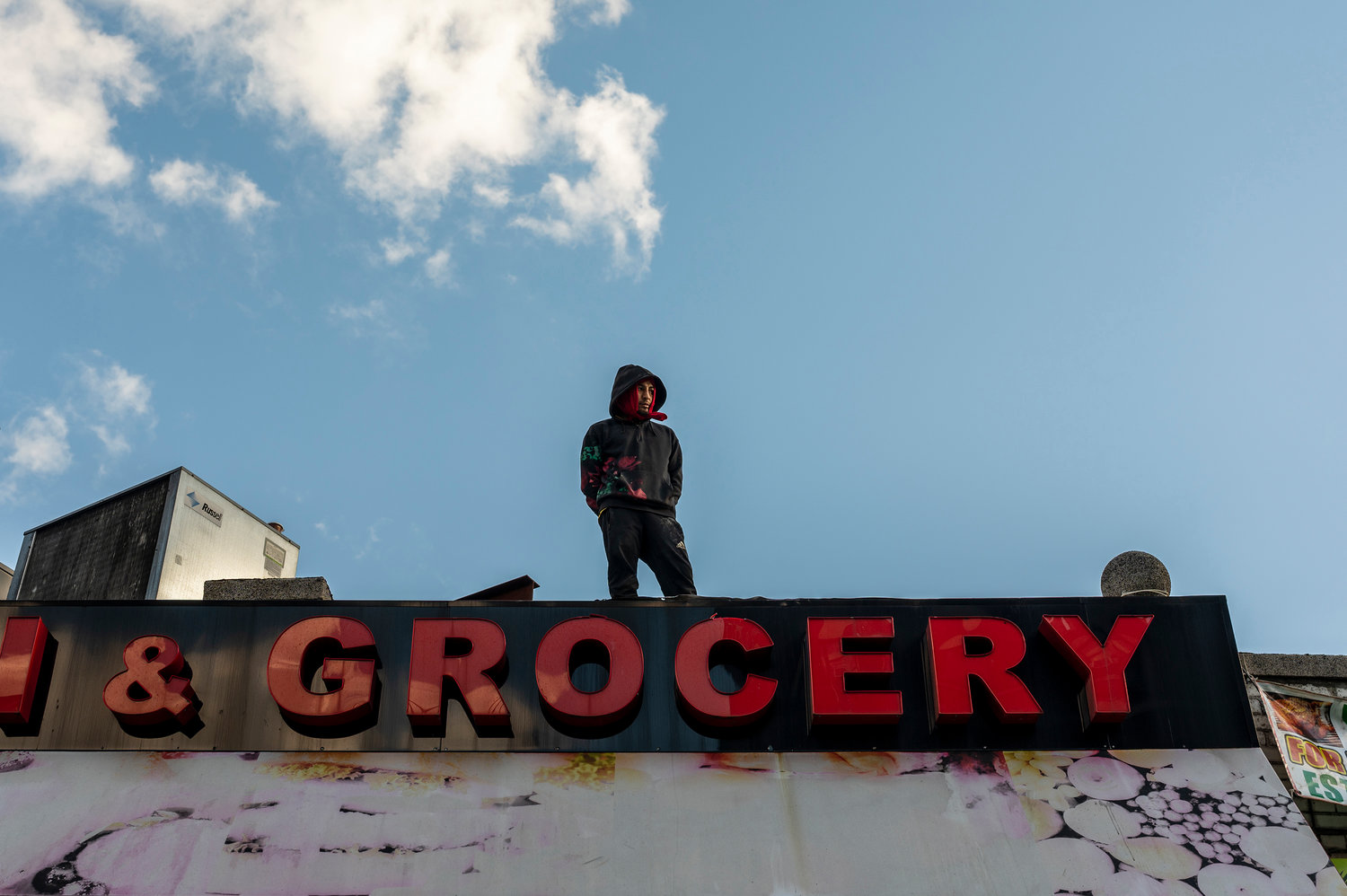 NEWS Realty Enterprises already has hired workers to begin repairs on the roofs of businesses consumed by a fire last week at Bailey Avenue and West 238th Street. The landlord has yet to inform the tenants when they might be able to return to their businesses.
HIRAM ALEJANDRO DURÁN 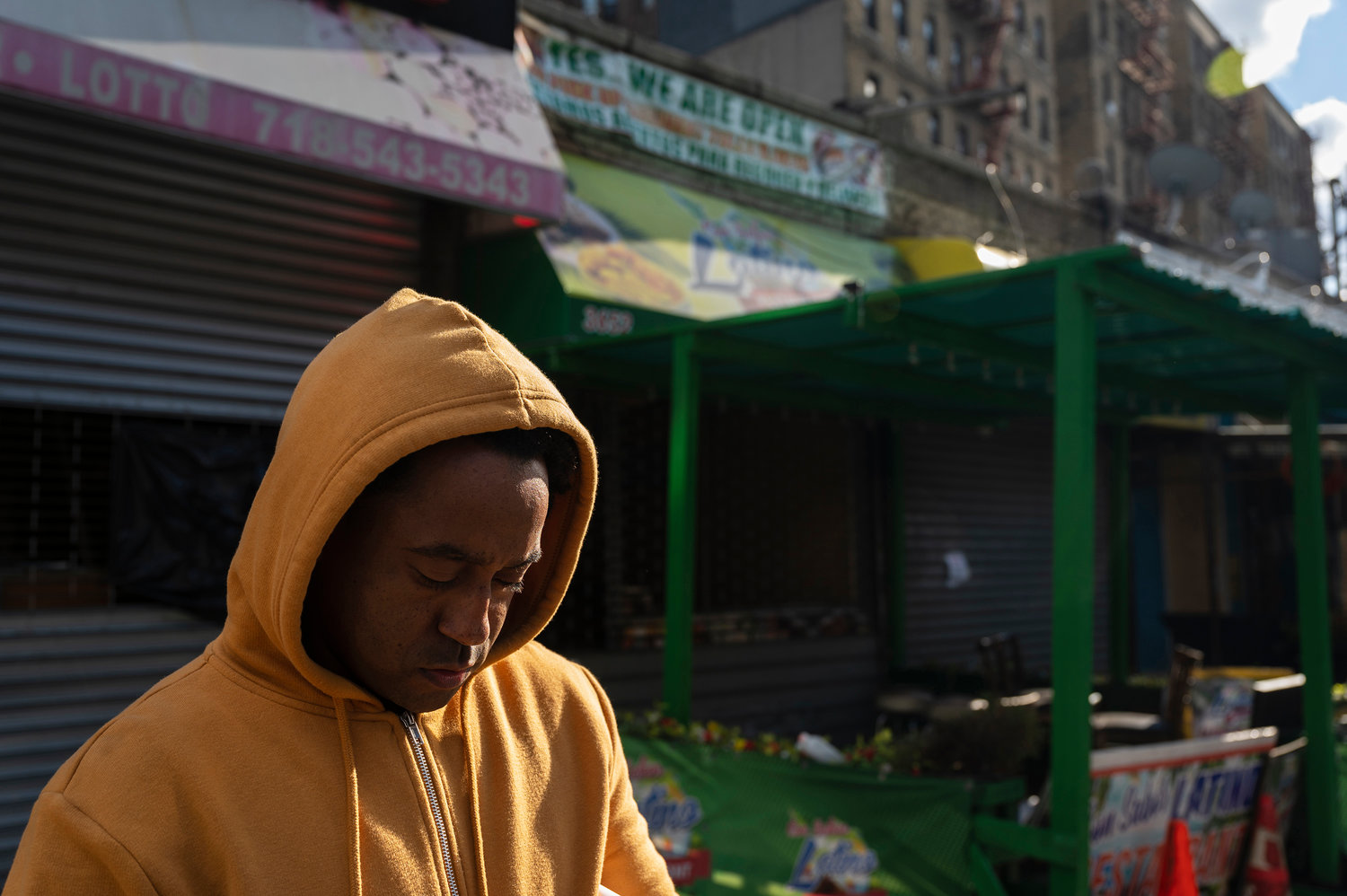 Julio Rosario stands outside of Con Sabor Latino at 3652 Bailey Ave., where his family business was before flames nearly destroyed it. Rosario first opened the venue in 2015, but now may have to consider relocating if his landlord cannot guarantee him a return date.
HIRAM ALEJANDRO DURÁN 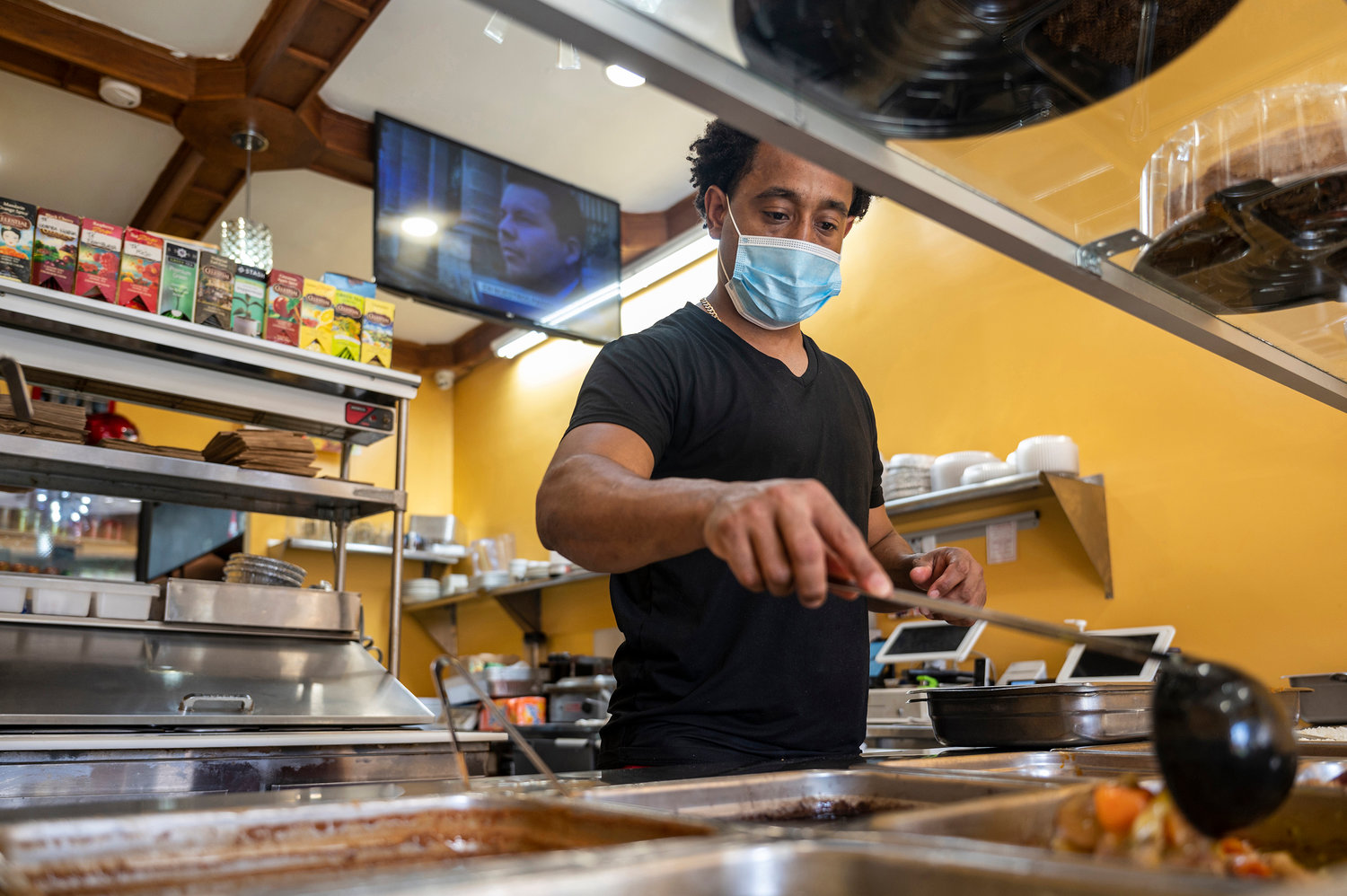 Julio Rosario prepares a meal at Con Sabor Latino at 3652 Bailey Ave., in June. The restaurant was one of two Latin cuisine eateries destroyed by a four-alarm fire last week.
HIRAM ALEJANDRO DURÁN/ File
Previous Next

For many, the last two years have been anything but easy. For Ada Rosario and her husband Julio, however, things have taken a turn for the worst.

Last week, the commercial strip where their restaurant — Con Sabor Latino — is located, was practically destroyed by flames. Now the couple is left with several questions and no answers.

“Right now, we don’t know what to do or where to go,” Ada said. “It’s tough because this is how we make our living.”

Fire ripped through Con Sabor and four other businesses on Bailey Avenue near West 238th Street last week, boarding up a popular corner in the Kingsbridge Heights neighborhood. And when it might return — that’s a good question.

The family ran Con Sabor Latino at 3652 Bailey just off West 238th for more than six years. It’s one of two Latin cuisine eateries affected by the fire on the strip. The other was Tililá Casa Publica & Cocina just a couple doors down.

For the Rosarios, however, there has been no other business since they immigrated from the Dominican Republic.

Ada’s also awaiting a report from the city’s buildings department, which initially issued a full vacate order before downgrading it to a partial vacate order for fire, smoke and water damage, along with the open roof caused when firefighters worked to put out the blaze that also damaged or destroyed Bailey Deli & Grocery, Yeung Hing Restaurant and Best Laundromat.

Overcoming the coronavirus pandemic was a lot to worry about. But a raging fire? That’s the last thing the Rosarios thought they’d have to worry about — especially one that was not of their doing. Investigators believe an electrical issue inside Yeung Hing at 3650 Bailey is what started last week’s fire.

“It’s upsetting because that fire didn’t start here,” Mrs. Rosario said. “We can’t open up, not even to see what’s (salvageable), because it’s still dangerous to go in there.”

Even before the pandemic, Con Sabor was struggling, Ada said, when her landlord shut the gas off for more than two months.

“This business means everything to me,” Julio said. “I have nothing else.”

Now everything hinges not only on city officials, but also the building’s landlord, NEWS Realty Enterprises. They had not cleared things up with the Rosarios, at least as of early this week.

And if the company doesn’t get back to the family soon, they might just consider opening another business elsewhere.

“I’m willing to start over again if I have to,” Julio said. “All I want to do is get back to work.”

Still, it wouldn’t be easy for the family-owned business to just pick up and leave quite yet.

“I don’t really have any money to just pick up and start somewhere else,” Julio said. “Most of the money I had was burned up inside of the restaurant.”

Before the fire, the Rosarios paid $2,650 monthly for their small space between Bailey Deli and Yeung Hing.

With the news of a fire ravaging an entire commercial strip in the Kingsbridge-area, members from Community Board 8 are stepping up to see what could be done to help.

“It’s something that we’ve been working on to try to get the relief for those businesses.”

For Fazio, the incident is one he sympathizes with — and one he takes very personally.

“When I see that as a business owner, it breaks my heart,” he said. “It’s not just an empty storefront. That’s somebody’s dream.”

Fazio lauded the commercial strip as being a largely successful part of the neighborhood.

“They had done so well,” he said. “That commercial corridor was really working hard through the business in the Bailey Avenue Business and Merchant Association.”

The fire came at an unusually difficult time as restaurants bounded by COVID-19 restrictions can no longer use outdoor dining as a remedy to the vaccine mandate because of the cold weather.

Gov. Kathy Hochul announced a $450 million package Monday aimed at helping the hospitality industry, including $100 million in incentives for struggling hotels and restaurants across the state.

While the money could have helped businesses like Con Sabor, Tililá and Yeung Hing, it’s unclear if they would still qualify because they are currently closed. Tililá alone employed more than 20 people, Fazio said, who have now found themselves unemployed just before the holidays.

NEWS Realty already hired a company to begin repairs on the strip’s roof just days after the fire. The damage there included collapsed ceilings, shattered storefront windows, and water damage.

More than 160 firefighters responded to the fire, but only one experienced any injuries.

The fire was the second to occur on the block in the past month or so. In late September, firefighters responded to a two-alarm blaze at a residential building across the street at 181 W. 238th St.

One person died in that fire, while another was hospitalized. Fire officials ruled the cause to be electrical, as they did for a third fire within a mile radius at 130 Van Cortlandt Ave. W., with reports later that city officials have ordered the entire building inside Van Cortlandt Village to be evacuated.