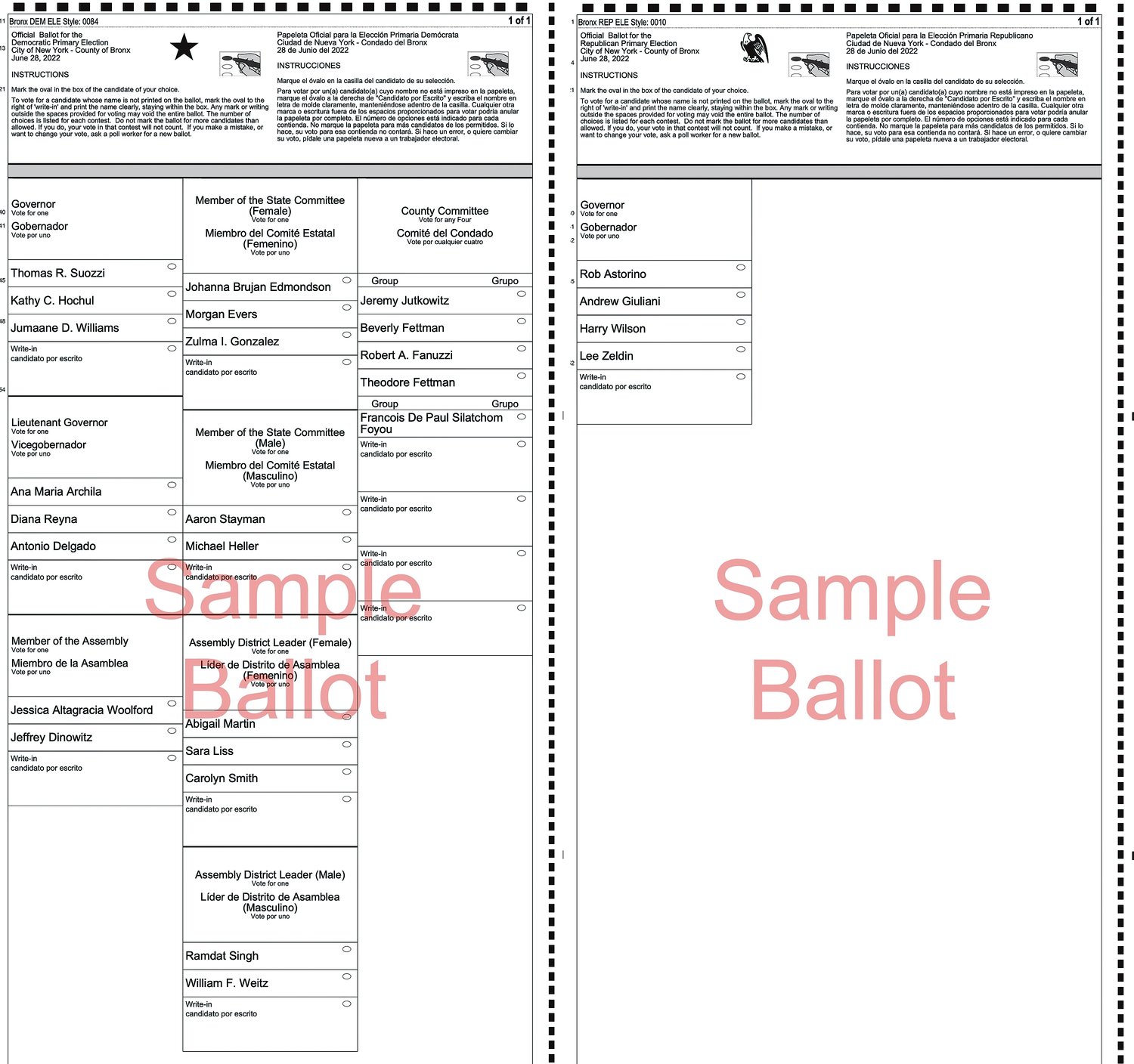 Primary election day is just around the corner on Tuesday. In the Bronx, voters will make their picks for governor, lieutenant governor, state assembly and other party positions.

While Democrats in this corner of the Bronx will cast their vote in several races on June 28, Republicans are only picking a gubernatorial candidate.

Early voting is already underway and will run through Sunday. To find your poll site, go visit FindMyPollsite.vote.nyc.

Due to a change in election law, voters cannot cast a ballot on a voting machine if they have requested an absentee ballot.

And remember: Thanks to a chaotic redistricting process, in this election cycle there are two primary days — the second of which falls on Aug. 23 for the state senate and congressional races.

Here is a brief rundown for the Democratic and Republican primaries, as well as the candidates.

In the Democratic primary, the choice is between Kathy Hochul, Jumaane Williams and Tom Suozzi.

Hochul, the former lieutenant governor, came to power after former Gov. Andrew Cuomo resigned following a series of sexual harassment allegations against him.

As part of the state’s new budget, Hochul approved giving $600 million in tax subsidies to the Buffalo Bills to help pay for a new football stadium — a move that was met with serious opposition from fellow lawmakers and other government officials alike.

Williams is the public advocate of New York City. He is a longtime organizer and activist, often seen as the most left candidate in the race.

Suozzi is a current congressman from Long Island. He considers himself a “common-sense” Democrat. He was recently endorsed by the New York Post’s editorial board.

On the Republican side, the candidates are Lee Zeldin, Andrew Giuliani, Rob Astorino and Harry Wilson. Zeldin is a congressman for eastern Long Island and is considered the front runner in the race, having been endorsed by the state Republican Party. Zeldin was a vocal supporter of Donald Trump during his presidency.

Astorino was the Republican nominee for governor of New York in 2014. He is also a former two-term Westchester County executive. He’s running on a campaign to cut taxes and grow the economy.

Wilson distinguishes himself from the other Republican hopefuls in that he is the only one who is for abortion rights, according to a Politico article. Wilson also worked as an advisor to the federal Treasury Department under President Barack Obama.

A former U.S. representative, Delgado is the lieutenant governor of the state, and is running on the same ticket as Hochul. Her first running mate, Brian Benjamin, resigned as lieutenant governor in April after he was indicted on corruption charges.

During Brett Kavanaugh’s Supreme Court hearings in 2018, Archila started a media storm after challenging former Sen. Jeff Flake while he rode the elevator over his support of Kavanaugh’s nomination. If elected, Archila would be the first Latina and first LGBTQ+ statewide elected official in New York’s history.

Reyna is a former city council member and deputy borough president in Brooklyn under Mayor Eric Adams. She is Suozzi’s running mate. Like Suozzi, Reyna is viewed by many as a centrist Democrat.

In the Assembly race, Democrats will choose between Jessica Altagracia Woolford and Jeffrey Dinowitz.

Dinowitz has held the seat since taking office in 1994. His top issue is addressing gun violence. He has earned the support of both U.S. Rep, Ritchie Torres and U.S. Rep. Adriano Espaillat.

Woolford is running on a platform of housing for all. She has been endorsed by U.S. Rep Alexandria Ocasio-Cortez and state Sen. Alessandra Biaggi.

Their official duties include attending party meetings and voting on either county positions or civil judge courtships.

They are also expected to lead voting drives, phone banking sessions and other electoral efforts. This year, the races are uncharacteristically competitive as three of the four incumbents, most of whom have held these positions for several terms, are not seeking re-election.

County committee is the most “grassroots” position within a county party.

Members are charged with voting on party rules and electing officers within the organization.