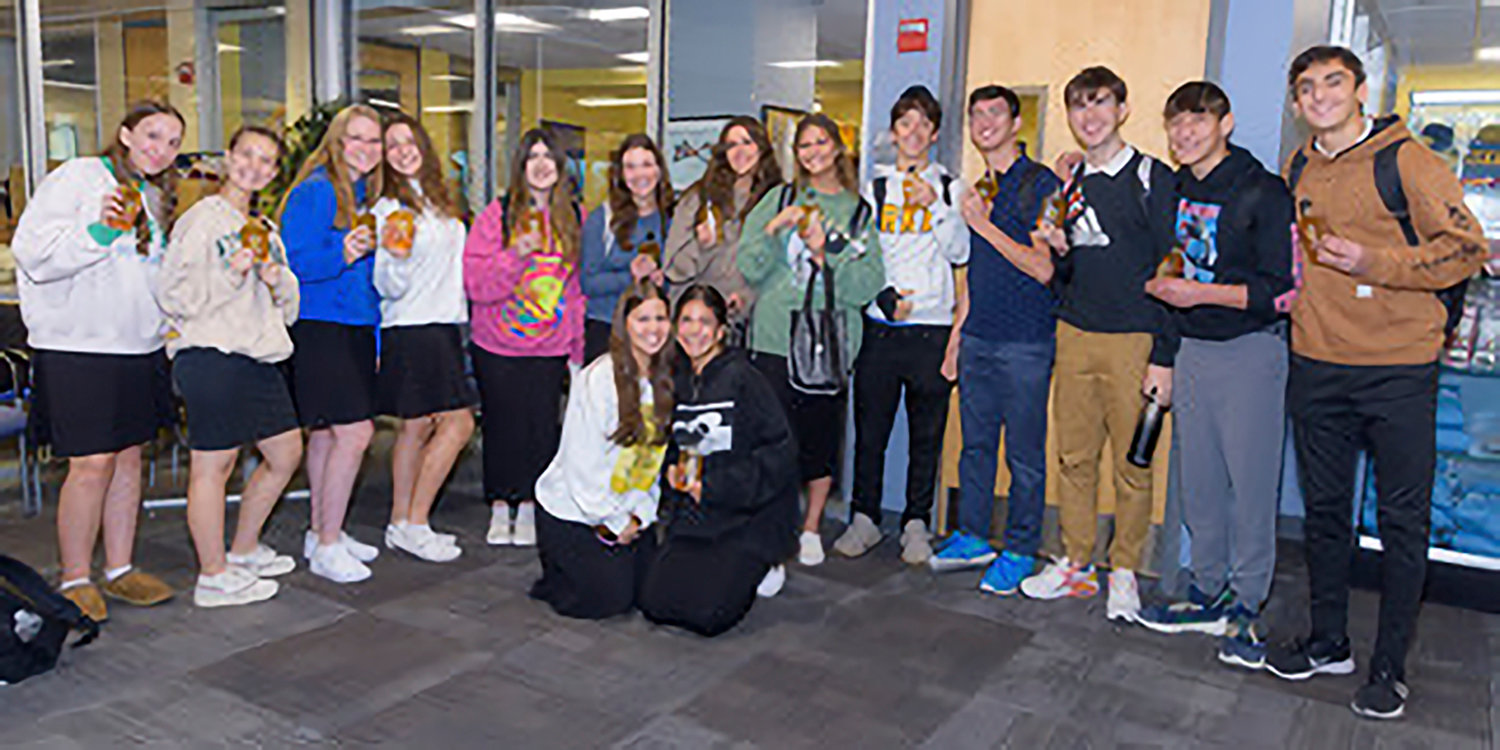 Members of the SAR High School beekeeping club show off their homegrown honey that was ready just in time for Rosh Hashana. Apples dipped in honey is a staple of the holiday meal.
Courtesy of SAR High School
By Stacy Driks

Salanter Akiba Riverdale High School students put on their jackets with a veil hat as they entered a bee arena.

To be successful beekeepers, there is an important rule. And that is to know the bees. The club learned about the insect with four wings and its social castes from Rabbi Daniel Senter, an apiarist extraordinaire.

Once the weather warmed up, faculty advisor Dr. Qiao Fenger and the club installed two beehives on the roof of the building.

It was just their luck that after regularly checking over the school year, the hives produced their first batch of honey, just in time for the Jewish holiday, Rosh Hashana.

As the hives mature, 200,000 plus bees will produce even more honey in the coming years, according to the school.

Rosh Hashana, one of Judaism’s holiest days, marks the beginning of the New Year. Eating apples is a tradition. In ancient times, Jewish people thought that honey was a healing property.

Alexis Gil from greater Riverdale, assigned to Company A, 1st Battalion, 69th Infantry Regiment, has been promoted to the rank of private.

Major Gen. Ray Shields, the adjutant general for the state of New York, announced the promotion of members of the National Guard in their leadership responsibility.

The guard promotions are based on performance, attitude, leadership ability, and development potential.

The New York National Guard — a division of military and naval affairs — is responsible for governing and managing New York’s military forces. These forces consist of 20,000 members.

Gil, along with 225 others, was recognized as a qualified soldier. The promotion also attracts the highest caliber citizen soldiers for a career in the near future within the guard.

The 69th infantry has a distinguished history dating back to the Civil War. The Battalion is the subject of Irish folk songs, “The Fighting 69th” and “fighting 69th,” a movie about its exploits in World War I.

The Battalion was called to active duty earlier this year and is preparing for an overseas security mission.