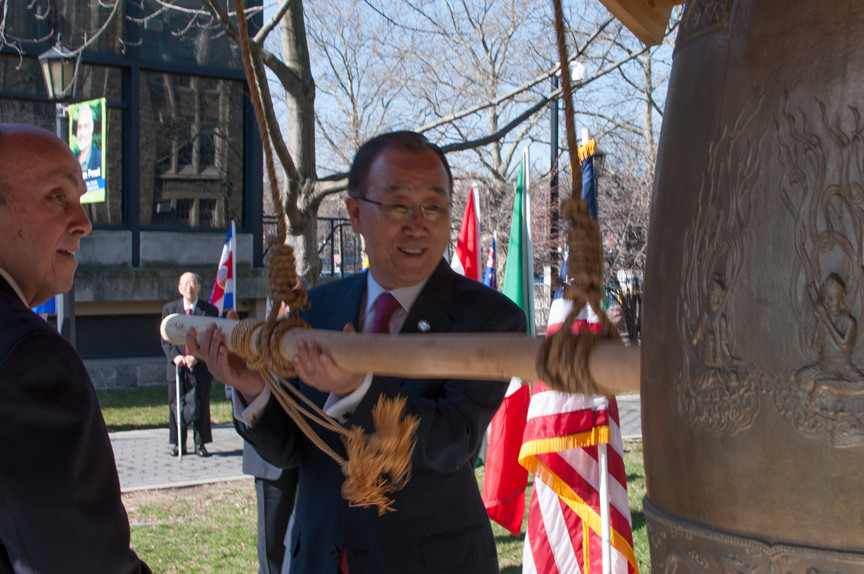 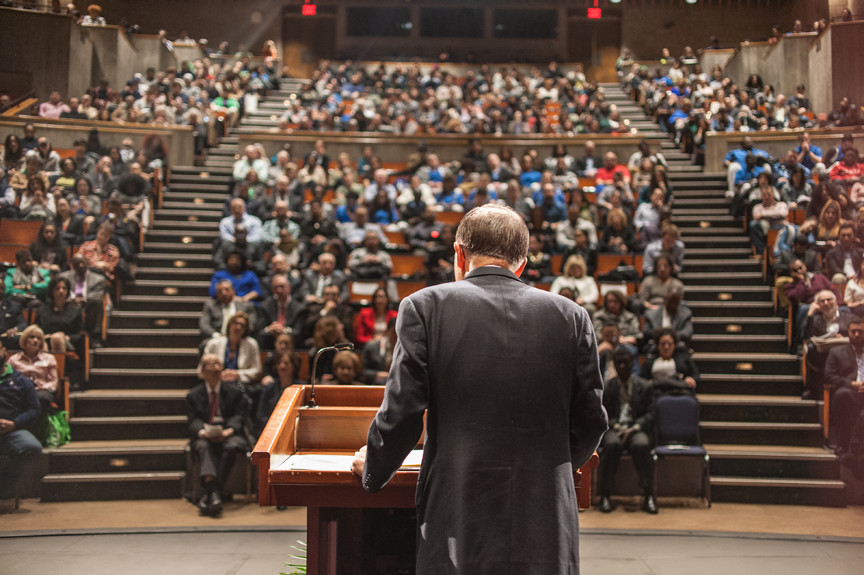 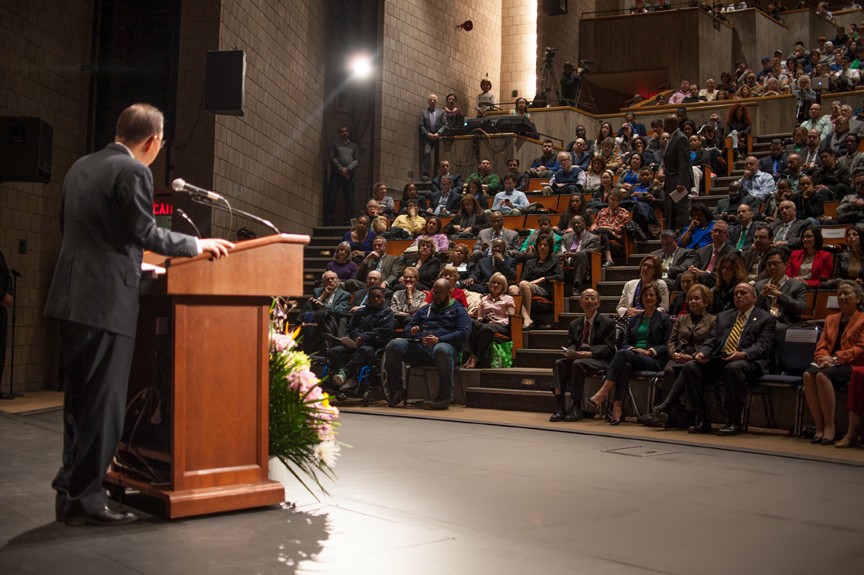 To judge by international headlines, college students are not on their way to a very welcoming world. But last week, U.N. Secretary General Ban Ki-moon came to Lehman College with an upbeat message, exhorting young audience members to believe in the power of their voices.

“I as secretary-general have some constraints sometimes, political constraints, to raise [my voice] as high as I want to,” he said inside the college’s Lovinger Theater on March 17. “But young people, you don’t have any limit. Just raise your voice… We need you to rise up for civil rights, for social justice, for equal opportunity and fair play here in the United States and all around the world.”

Much of Mr. Ban’s speech focused on crises around the world and the U.N.’s efforts to alleviate them. “That flag, which you see here, is still the beacon of hope to millions, millions of people around the world,” he said, pointing to a blue U.N. flag behind him on the stage.

He interspersed his comments about refugees from Syria, apparent provocations from North Korea and other crises with calls for young people to support the work and spirit of the U.N.

“Over the years, the United States has been a very generous contributor of humanitarian aid, development aid and a leader in the fight against hunger and terrorism,” he said. “I hope that the students, as emerging global citizens, will make the case for even stronger global engagement.”

He continued that students from immigrant backgrounds are in a position to sympathize with people who are migrating due to conflicts around the world. Lehman College says its student body includes people with roots in about 80 different countries.

“Many immigrants’ families know the sacrifices your loved ones have made, including for those of you who are the first in your family to go to college,” Mr. Ban said. “Many of you may have a special window of understanding on the plights of those escaping from insecurity, inequality and injustice and bigotry.”

The secretary-general’s speech was the 47th annual Herbert H. Lehman Memorial Lecture. Mr. Ban noted that the college has a unique place in the U.N.’s history, since the campus was the site of the U.N. prior to the creation of its current headquarters in Manhattan. The Universal Declaration of Human Rights was drafted at Lehman.

After a brief question-and-answer period, in which an educator read student-submitted questions to Mr. Ban, a number of students trekked to the faculty cafeteria steps away from the Lovinger Theater.

Many said the secretary-general’s emphasis on the power of youth resonated with them, though some found the speech highly idealistic.

“I know so many people on social media, they’ll say we don’t want something, but they don’t go out there and vote,” said Idowu Kehinde, 18, an exercise science student. “It’s really important that we act as citizens.”

Sitting next to her, Malikka Wilson reacted to statements like Mr. Ban’s call to end poverty by 2030.

“He wasn’t very specific… in terms of what we can do in the general population,” said Ms. Wilson, 24, a sociology major. “We all have those ideals, but you as the U.N. representative, you’re supposed to tell us, okay, this is what you can do.”