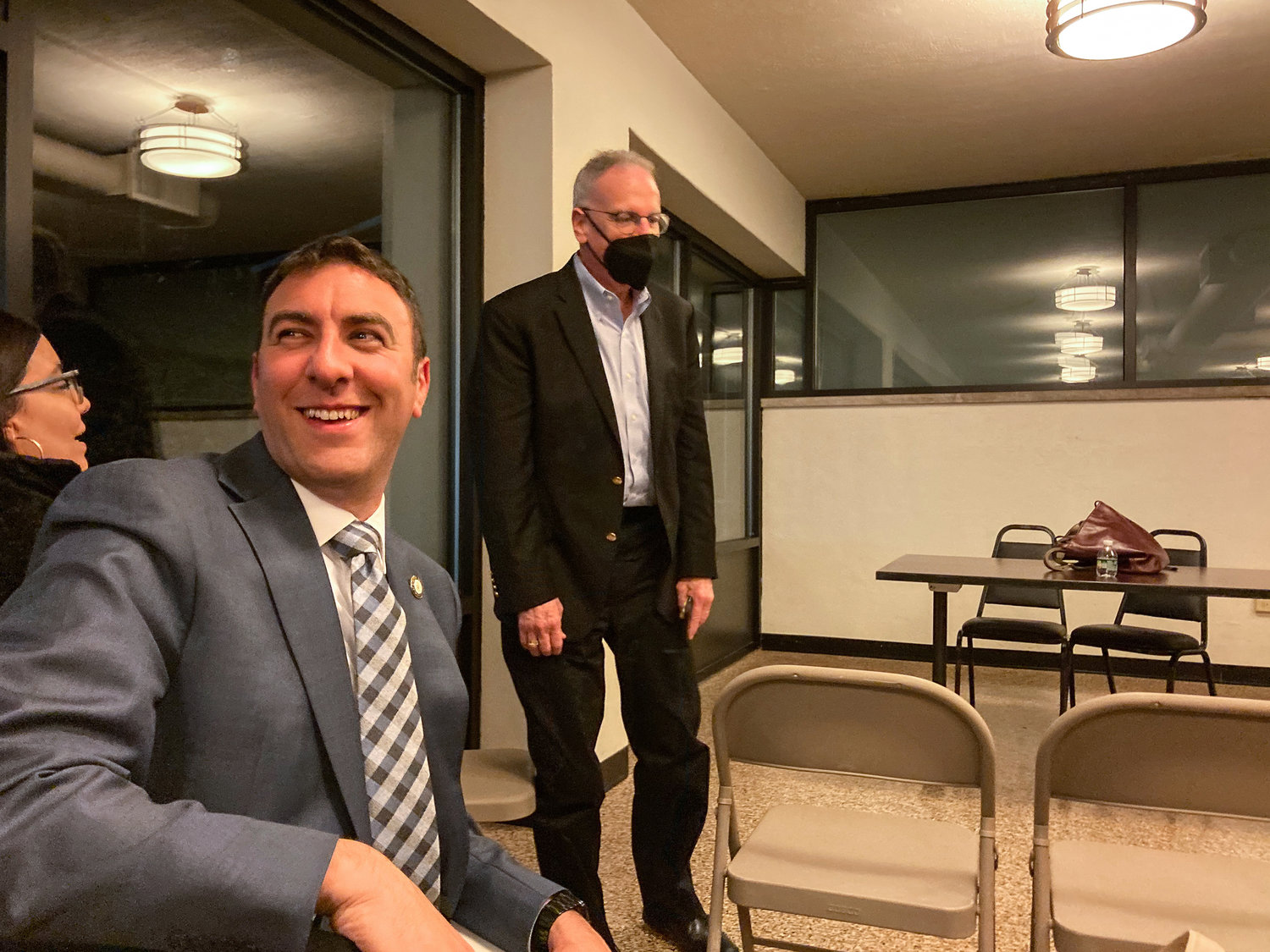 Seconds after Eric Dinowitz was endorsed by the Ben Franklin club members by a unanimous vote last week. He was all smiles.
Sachi McClendon

In a very short time, we were able to get a repainted crosswalk, better lighting, and the stoplight, which is something the community as been asking for a long time.”
ERIC DINOWITZ, councilman
By Sachi McClendon

Not even a month out of the state’s electoral season and the first move in the city council race, at least in the northwest Bronx, has been made: On Nov. 22 the Benjamin Franklin Reform Democratic club voted unanimously to endorse Eric Dinowitz for another term as the city councilman.

This is the third time the influential club has put its weight behind the councilman, who will enter the race, almost assuredly, as the top contender.

Dinowitz was the only one seeking the club’s endorsement, even though its members and executive committee had been spreading the word for the past month that it would be considering potential candidates.

So the decision, on the night of the meeting, really came down to either endorsing Dinowitz or no one. The club dispensed with a secret ballot, choosing instead to hold a vote through a show of hands. And their choice was clear: Every member present voted in favor of endorsing Dinowitz.

Prior to the vote, Dinowitz pitched himself and his accomplishments. During the pandemic, he was able to bring both food distribution sites as well as pop-up vaccine sites “when they were hard to come by” to the district. He mentioned the pedestrian safety improvements to the corner of Johnson Avenue and Kappock Street that came after community activist Ruth Mullen was struck and killed by an MTA driver operating a BxM1 express bus.

“In a very short time, we were able to get a repainted crosswalk, better lighting, and the stoplight, which is something the community have been asking for a long time,” he said.

“As soon as I got into office, on my first phone call with Mayor de Blasio,” he said, “One of the few things I mentioned was the daylighting of Tibbetts Brook.”

At the meeting several people stood up to shower praise on the councilman, including state Sen. Jamaal Bailey, who also serves as the chair of the county Democratic party.

As of Monday, Dinowitz is the only one registered as a candidate for district 11 with the city’s campaign finance board. Still, there’s plenty of time for someone to enter the race as the filing deadline for this election cycle is still quite a ways off.

At the meeting, one member even questioned if the vote was a bit premature. Yet, as past Ben Franklin president Bruce Feld explained it, the club has historically made endorsements well in advance of the primaries. “It isn’t just holding your hand over the candidate’s head,” Feld said. “We do a lot of work and that’s what establishes our reputation. For petitioning. For campaigning. All the ways that we support what we consider to be a good candidate.”

The 2023 primary will take place on June 27, the general on Nov. 7. And thanks to redistricting, all 51 council seats will be up for grabs next year.

Dinowitz first won his seat back in March 2021 during a special election held after the sitting councilman Andrew Cohen was elected to the New York Supreme Court. Dinowitz then went on to win the crowded 2021 primary months later. In both of those races, he had the support of the Ben Franklin Club.

The Unity Democratic Club — the other, though newly formed, political organization in the northwest Bronx — told The Press that it will not be making an endorsement for the race at this time.