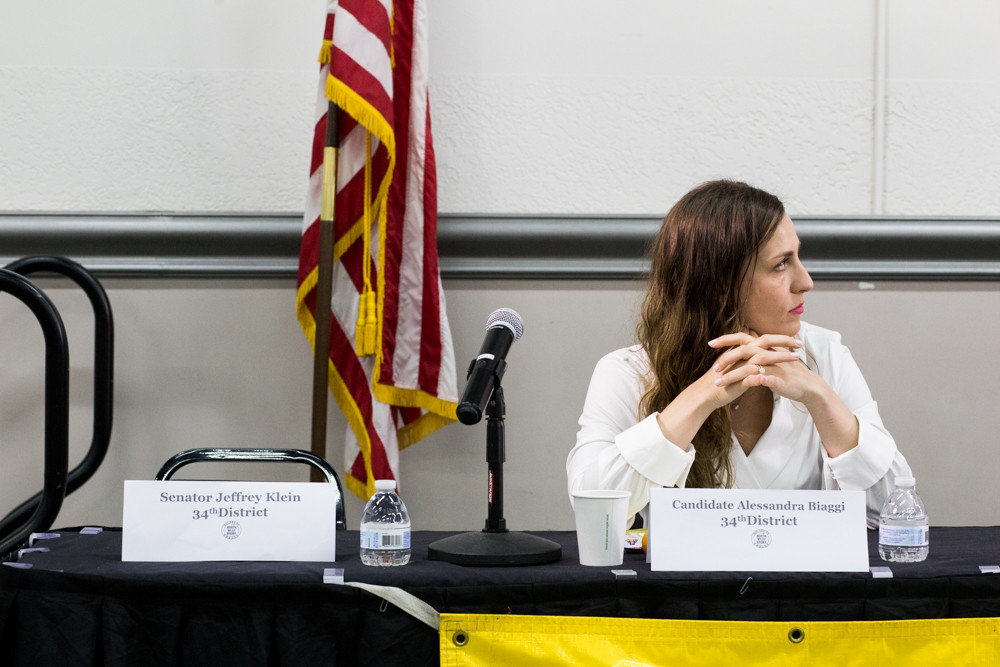 Alessandra Biaggi sits on the panel at a nonpartisan candidates forum held by the Northwest Bronx Community and Clergy Coalition in 2018 after then-state Sen. Jeffrey Klein was a no-show. Biaggi is backing Mino Lora and Jessica Haller in the upcoming city council special election race, blasting Eric Dinowitz for supporting Klein, and thus block the Democrats from taking the majority in the upper chamber.
JULIUS CONSTANTINE MOTAL / File
By MICHAEL HINMAN

With just two weeks to go before voters will decide a special election city council race for the seat formerly held by Andrew Cohen, state Sen. Alessandra Biaggi is now backing a candidate.  In fact, two. And as she made clear on Twitter late Tuesday night, neither of them are Eric Dinowitz.

"Eric Dinowitz is a younger, slightly savvier version of the same cynical machine politicos, who for some reason still haven't learned their lessons about lying and misrepresentations, despite their mounting losses in recent years," Biaggi shared on Twitter. "If Eric Dinowitz wins the special, I will give the second place candidate my full energy and resources to make sure he doesn't win the primary in June."

Biaggi added the council district "deserves honest representation," and has backed Mino Lora and Jessica Haller as her top two picks on the ranked-choice voting ballot.

The unplanned announcement apparently was a response to a statement Dinowitz's campaign made to the Norwood News on Monday that the former teacher "supported efforts to elect a Democratic majority in the state senate, and make Andrea Stewart-Cousins the majority leader."

Biaggi wasn't accepting that at all, tweeting Dinowitz's statement was "a blatant lie." He "supported Jeff Klein, who was keeping (Stewart-Cousins) from being majority leader."

Those claims were echoed by Rachel McCullough, political director of The Jewish Vote political organization, that also backed Lora and Haller, who lashed out not only at Eric Dinowitz, but also his father, Assemblyman Jeffrey Dinowitz.

"Dinowitz the father, Dinowitz the son and Andrew Cohen all supported former Sen. Jeff Klein, the IDC and Republicans in the state legislature," McCullough said. "And (they) are again working against the people of the Bronx during a deadly crisis."

Klein led a group of Democratic state senators that broke away from their party and instead caucused with Republicans to help them retain power in the upper chamber. Biaggi defeated Klein in a primary upset in 2018, despite not having the backing of the Bronx Democratic political machine, which instead supported Klein. Once this Independent Democratic Conference was voted out, Democrats — led by Biaggi — retook the majority, elevating Stewart-Cousins to majority leader.

"My campaign's statement referred to my work proudly volunteering as a Democratic district leader, and with the United Federation of Teachers to support Democrats," Dinowitz told The Riverdale Press in a statement. He cited his work supporting a number of state senators ranging from Gustavo Rivera in 2010, to other candidates like Shelley Mayer and Todd Kaminsky in special elections, and sJames Skoufis and  Anna Kaplan in 2018.

"That is unequivocally how I invested my passion and energy in 2018, and I embrace the new voices that emerged that year," Dinowitz said. "I am proud of the broad progressive coalition of support my campaign has built, and I'm laser-focused on the Northwest Bronx's recovery."

Biaggi's endorsements are similar to the nods offered by state Sen. Gustavo Rivera earlier in the week. He backed a ticket with theatre non-profit leader Lora as first choice and environmental activist Haller as second, although Biaggi did not rank her choices, according to a spokeswoman.

"Sen. Alessandra Biaggi shows us what it looks like to take on the biggest fights in New York — and win," Lora posted on Twitter in response to Biaggi's endorsement. Just before that, however, she attacked Dinowitz's claims, saying "we've had enough of this behavior."

"Imagine working against the people of the Bronx by actively supporting the IDC — and then lying about it two weeks before the election," Lora said.

Haller was a little more subdued on Twitter on Tuesday, thanking Biaggi for her backing. "We will continue to take down the machine and stand up for the Bronx together," Haller added.

CORRECTION: State Sen. Alessandra Biaggi did not rank her endorsements, but instead endorsed two candidates equally, her spokeswoman clarified on Wednesday.