If all of this feels familiar, it should: lawmakers were at odds over this bill last year 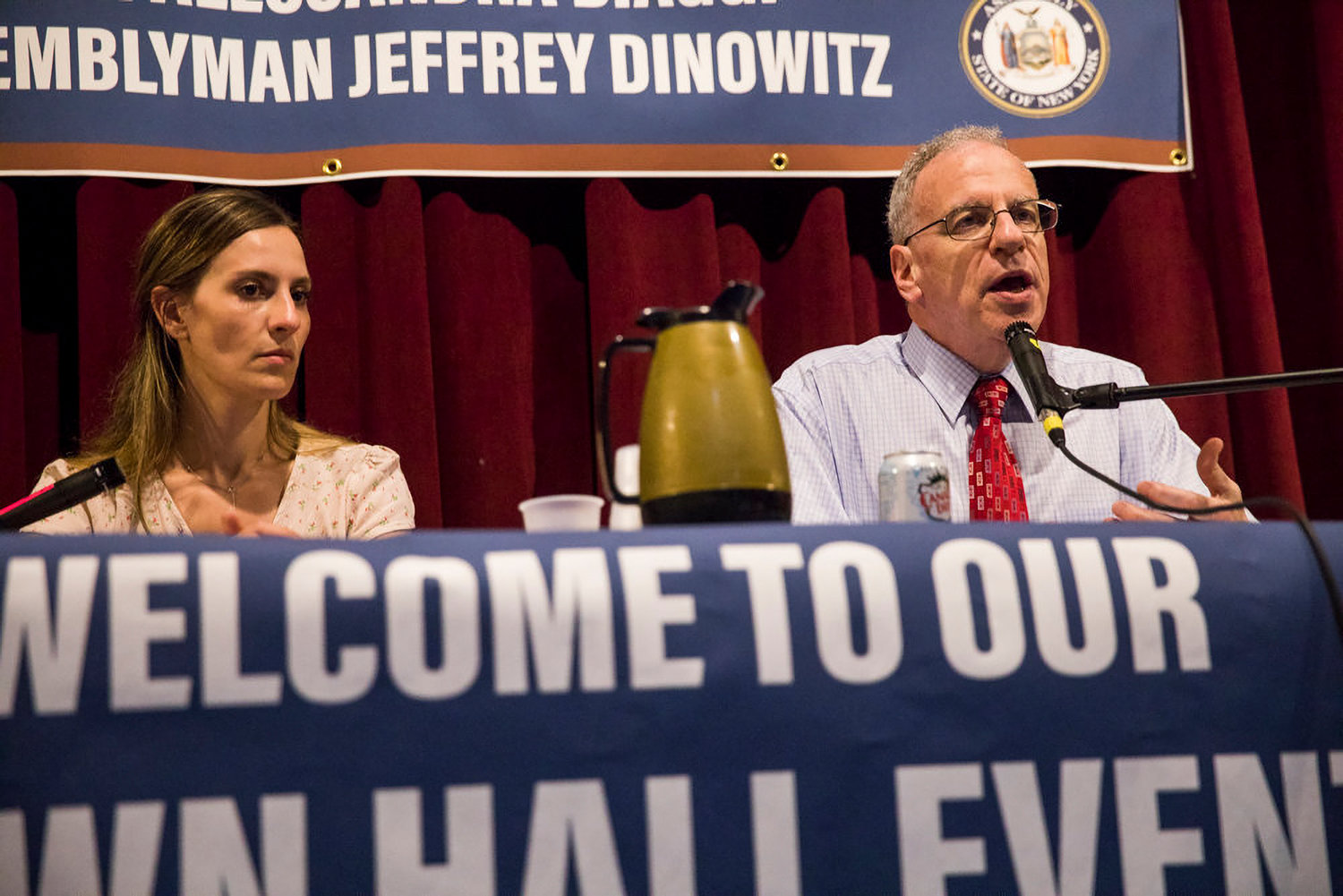 State Sen. Alessandra Biaggi said Assemblyman Jeffrey Dinowitz wouldn’t return her phone call as tried to figure out how to get a rape reform bill — legislation they both sponsored — to pass both chambers in the final days of the legislative session.
JULIUS CONSTANTINE MOTAL / File

I’m not really going to focus on pointing fingers. That’s just not the mature and appropriate way to try to legislate.”
JEFFREY DINOWITZ, Assemblyman
By Sachi McClendon

A bill to reform New York’s sexual assault statutes failed to pass in the final days of the 2022 legislative session in Albany.

State Sen. Alessandra Biaggi, one of the bill’s sponsors, says there’s just one person to blame. And it’s the same lawmaker who sponsored its companion version in the Assembly: Jeffrey Dinowitz.

Biaggi, who is departing her state senate seat with an eye on Congress, originally drafted a version of this legislation in 2019 attempting to close a loophole she says allows those accused of rape to have their court cases dismissed if the victim was intoxicated or under the influence at the time of the assault.

The current statute, Biaggi says, blocks — or at the least discourages — sexual assault victims from pressing charges if they were assaulted while not sober.

The new legislation would have stopped judges from allowing voluntary intoxication as a criminal defense. Several other states have passed similar legislation in recent years in an attempt to block this loophole.

Biaggi pulled no punches when telling The Riverdale Press who she believes stopped New York from enacting such legislation. She blames Dinowitz for allowing the bill to languish in the lower chamber.

“It didn’t get picked up because he didn’t return my phone calls when I called his office to have a conversation about how to get it done,” the senator said.

But that’s not how Dinowitz remembers it. Sure, he might not have called himself, but says a staffer did.

“I do believe in the last several days of session — at the very end — she did call my office, and my office called her back,” Dinowitz said. “My legislative director, I believe, spoke to his counterpart in her office.”

Dinowitz pushed his version of the bill through the Assembly’s codes committee, which he chairs. Since then, the Assemblyman — through his weekly newsletter and even in campaign literature — has positioned himself as a champion of this bill, as well as survivors of sexual assault.

“This legislation is fundamentally needed because prosecutors do not always pursue charges that may be merited out of fear for what the defense will argue,” according to Dinowitz’s newsletter. “It can also be a deterrent for survivors of sexual assault to come forward if they think their sobriety during the assault will come into question at trial.”

Yet the new language approved by Dinowitz’s committee stripped the bill of its teeth, Biaggi claims.

“The version that passed the codes committee is not the gold-standard version of what’s necessary,” she said, adding that it would instead introduce more hurdles to prosecuting sexual assault cases.

In the updated version, victims now had to be under a higher level of a substance in order to prevent the use of intoxication as a defense in trial.

“He amended the bill without our knowledge, and put in the standard that is extremely harmful to survivors of rape, which is something that doesn’t even really exist in law,” Biaggi said. “He created something called ‘extreme intoxication,’ which has no definition anywhere. It makes the standard of proof really high for survivors of rape.”

Dinowitz didn’t consult Biaggi, the community, advocates of the measure, or even district attorneys, the senator said. If he had, he would’ve have discovered that all would have “rejected that language.”

“He has a lot of constituents who have been working really hard to try to get that bill to pass,” Biaggi said. “So, it’s a big failure, and I think it’s also a big problem.”

Dinowitz told The Press he’s disappointed the bill didn’t pass, but he’ll continue to back the bill in the future — assuming he wins his primary against Jessica Woolford.

“It didn’t go in either house — neither the Assembly nor the senate — so I don’t really know how you can blame anybody in particular,” Dinowitz said. “I’m not really going to focus on pointing fingers. That’s just not the mature and appropriate way to try to legislate.”

This isn’t the first time the bill has withered on the vine. In last year’s legislative session, Dinowitz delayed bringing the bill to a vote in his codes committee for months.

He told The Press at the time that its fate in the Assembly was “complicated.”

“We want to balance, on the one hand, making sure that we can successfully prosecute criminals — in this case, rapists — and move those cases forward,” Dinowitz said in 2021. “But on the other hand, not create a situation where you’re guilty until proven innocent.”

Woolford has already accused Dinowitz of blocking the bill while out on the campaign trail. She even cited a video from Vox Media’s NowThis News that called the Assemblyman out.

“It shouldn’t take a primary challenge or a NowThis video for Assemblyman Dinowitz to listen to survivors, or do his job,” Woolford said. “But that’s what finally forced him to do the right thing: pressure.”

For Biaggi, it’s déjà vu. She told The Press in 2021 she didn’t “want to be coming back next year doing this again,” yet she is.

“In 2022, we should be taking issues like rape seriously,” the senator said. “We should be listening, I think, to the people who have actually been affected by them, (and) not taking it on our own accord to do whatever it is that we believe is right, when we really have no experience or understanding of it at all.”