Biaggi: GOP must stay out of Democratic primaries 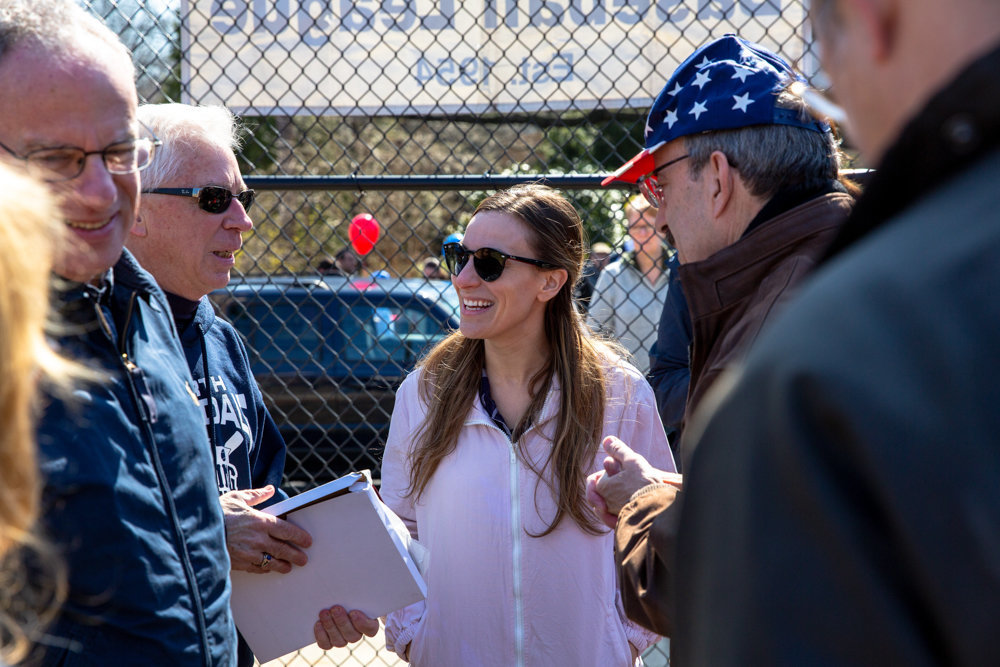 There might be legitimate debate on whether states like New York should keep its primaries closed, especially in areas where one party dominates others. But one state lawmaker is crying foul for a different reason: Republicans spending money, choosing sides in Democratic primaries.

"We need to free the community from Republican influence," state Sen. Alessandra Biaggi told The Riverdale Press. "Literally, as we speak, they are sending money. Why would Republicans send a Democratic congressmember $100,000?"

Biaggi is referring to a report by Ryan Grim and Akela Lacy at The Intercept, an online publication backed by eBay founder Pierre Omidyar, surmising money from a reported conservative super-PAC called Americans for Tomorrow's Future has transferred $100,000 to another super-PAC called the Democratic Majority for Israel. Although that particular PAC is known to have more Democratic leanings, it's spent some $600,000 on digital and television advertising promoting U.S. Rep. Eliot Engel and attacking his front-running primary challenger, Jamaal Bowman.

The PAC, according to Grim and Lacy, has not spent money on any other campaign since receiving the boost from Tomorrow's Future on May 27.

"We have seen reports that link independent political action committee expenditures to our campaign," an Engel campaign spokesman told The Riverdale Press in a statement. "To be clear, as required by federal law, the Engel campaign has no control, contact, or coordination with these committees. We would ask the same of our opponents, and we trust that election law is being adhered to in all instances."

Biaggi originally endorsed Engel for re-election to what would be a 17th term in Congress, but reversed her decision June 5, endorsing Bowman instead. The original endorsement was part of a cross deal among Biaggi, Engel and Assemblyman Jeffrey Dinowitz as a way to solidify the northwest Bronx's major elected leaders.

Biaggi withdrew from the deal not long after Engel was caught on a hot mic trying to push Bronx borough president Ruben Diaz Jr., for a chance to speak at an impromptu news conference on Fordham Road after riots there, reportedly telling Diaz that at least in terms of pushing to speak, "if I didn't have a primary, I wouldn't care."

A middle school principal in the Bronx and a political newcomer with the backing of the Justice Democrats — the same organization that helped lead Alexandria Ocasio-Cortez to an upset victory over then-U.S. Rep. Joe Crowley in 2018 — Bowman seized on the gaffe, using it to raise more than $750,000 in June, according to his campaign.

Both candidates in the race have had help from outside money. Bowman, according to CNN reporter Gregory Krieg, has had at least $500,000 in support from Justice Democrats and the Working Families Party, while Engel's largest boost seems to have come from the Democratic Majority PAC. Before this particular race, the PAC spent money fighting against the presidential primary run of Vermont Sen. Bernie Sanders.

The treasurer of Tomorrow's Future is David Satterfield, according to The Intercept, a former aide to former Republican Senate leader Bill Frist who now works for Huckaby Davis Lisker, an accountant firm with clients that include national Republican committee for both the House and Senate, as well as Senate Majority Leader Mitch McConnell's re-election campaign.

The publication points out major donors to Tomorrow's Future includes Florida logistics company executive Herbert Shear, who donated $100,000, after donating all he legally can to re-elect Donald Trump. He also gave an additional $85,000 to the Republican National Committee and the Trump Victory Committee.

"The way my brain has wrapped myself around this, anyone who is still deciding between Engel and Bowman needs to know the GOP is funding Engel," Biaggi said. "What must be true, when it comes to what Engel stands for versus what Bowman stands for, that Republicans are trying to protect Engel."

The congressman, who actually succeeded the state senator's grandfather, Mario Biaggi, in the district in 1989, has always touted close ties with Israel over the years. Although Democrats have struggled to back some of the policy and military decisions made by Israel in recent years, Engel has chosen to support the country, even as distance grew between him and other members of his party.

It's that support which makes Engel the man who must stay in Congress, according to an open letter by Rabbi Avi Weiss published this week in The Press.

"Mr. Bowman, you have raised questions about Israel's human rights record and labeled Israeli prime minister Benjamin Netanyahu as an 'authoritarian,'" wrote Weiss, founding rabbi of the Hebrew Institute of Riverdale. "However, Israel is the only democracy in the Middle East. It has just gone through its third election in 18 months. Yet, you've said nothing about the (Palestinian Authority), whose president — Mahmoud Abbas — is now in his 12th year of a four-year term. Will you similarly label Abbas an 'authoritarian'?"

The rabbi also questioned Bowman's support of Israel, based on his endorsement by Ocasio-Cortez, who Weiss claims supports the Boycott, Divestment and Sanctions movement led by those sympathetic to Palestinian causes, who believe the world should boycott Israel until it withdraws from areas claimed on behalf of the Palestinian Authority, and provide "full equality" for Arab-Palestinians living in Israel.

Bowman's campaign, for the most part, has focused more on domestic issues, including police reform, immigrant rights, the Green New Deal and Medicare for All. When it comes to Israel, however, Bowman says on his campaign website that he supports a two-state solution for Israel and Palestinians, and that he does not support BDS.

"I believe firmly in the right of Israelis to live in safety and peace, free from the fear of violence and terrorism, and support continued U.S. aid to help Israel confront these security challenges," Bowman said on his website. "I also believe that Palestinians are entitled to basic human rights, safety from violence, and self-determination in a state of their own."

Never part of the team

While these are important conversations to have — and ones that have been debated at a number of different political forums in recent weeks — Biaggi says seeing the Republican influence in the primary interferes with Democrats' rights to choose those who represent the party.

The senators open questions of such activity could very well further alienate her from Engel and other members of the Bronx party establishment like Dinowitz. However, she's found herself fighting that establishment not because she wants to, but because their closed ranks have given her no other choice.

"While I know that it's more powerful when everybody works together, I have proven to myself that I can represent this district strongly," Biaggi said. "I don't need to rely on any of the other electeds around me."

Just this past week, one of the Bronx's biggest political clubs, the Benjamin Franklin Reform Democratic Club — a group that is said to be primarily controlled by Dinowitz — publicized its endorsement of Democratic candidates facing primaries, citing each one by name. Except, that is, for the three state senators, which referred to them only as "incumbents." Biaggi was previously endorsed by the club along with colleagues Gustavo Rivera and Jamaal Bailey.

But Biaggi and Rivera were blamed by the Dinowitz-led political establishment for leading an "insurgent" ticket to dethrone some of its longtime members.

Ben Franklin Club president Michael Heller — who won re-election despite the internal uprising — did not respond to a request earlier this week for comment.

"It feels good to be a part of the team, that is a really good feeling," Biaggi said. "But I've never felt a part of this team."