Biaggi leaves Ben Franklin Club to start her own 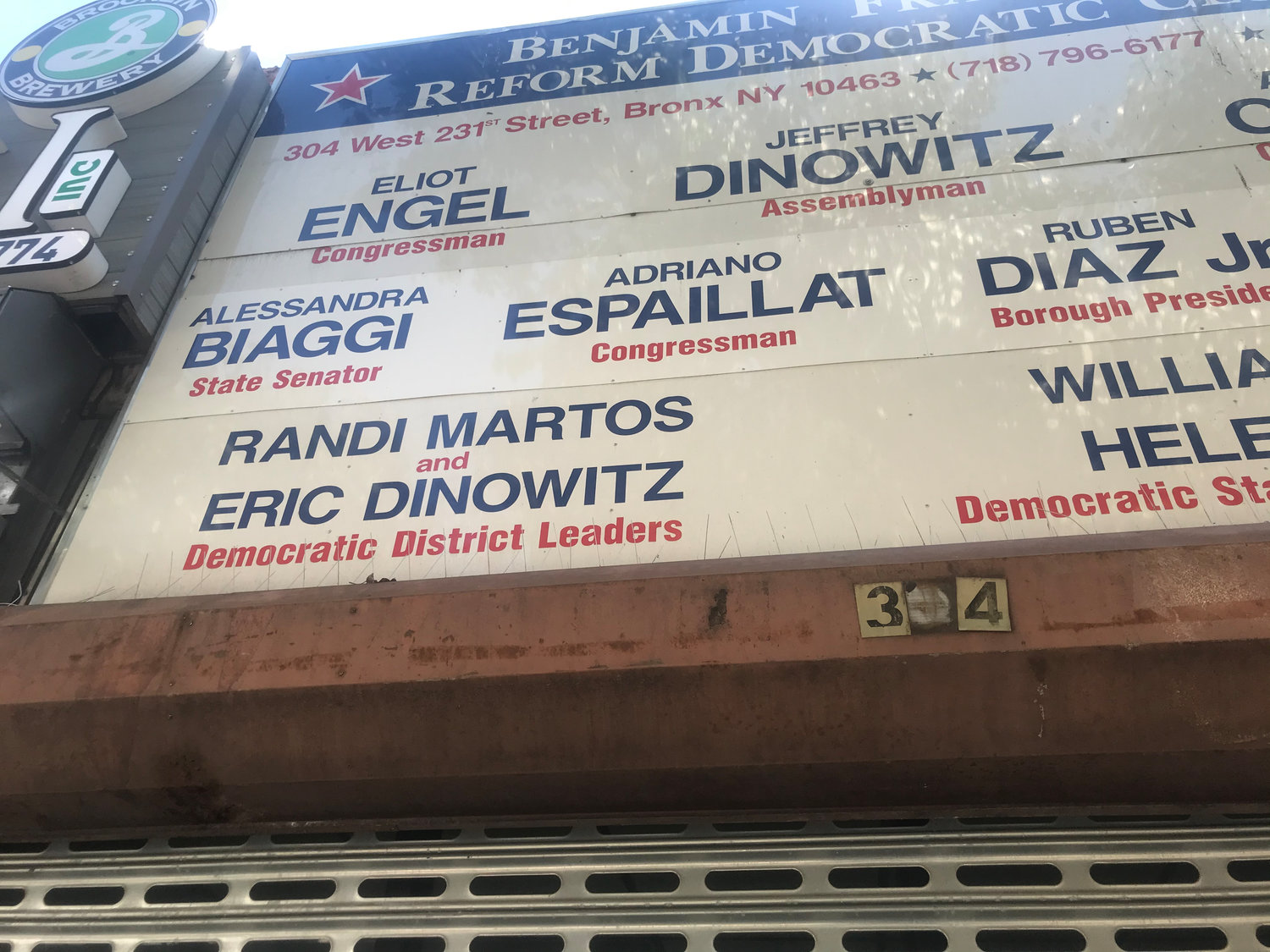 State Sen. Alessandra Biaggi wants to not only remove her name from the sign above the Ben Franklin Club headquarters on West 231st Street, she wants to leave the club all together. And start her own.
MICHAEL HINMAN 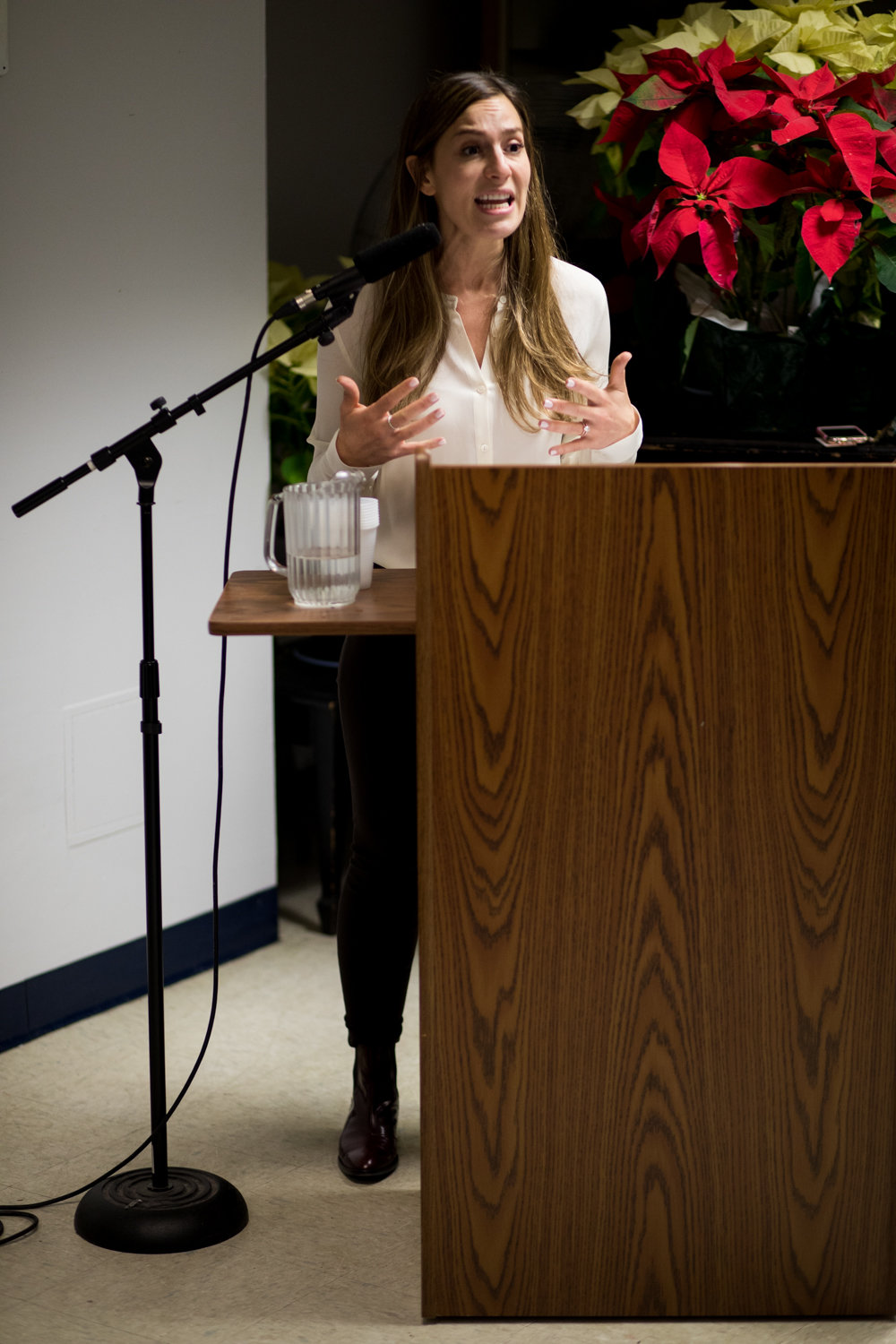 For years, a sign above the West 231st Street headquarters of the Benjamin Franklin Reform Democratic Club has featured the name of elected officials representing the Bronx. It includes names like borough president Ruben Diaz Jr., U.S. Rep. Adriano Espaillat, and even at the lowest elected levels, Eric Dinowitz and Randi Martos as Democratic district leaders.

But there's change coming to that sign — and it's not just the pending removal of U.S. Rep. Eliot Engel and Democratic state committeewoman Helen Morik, who lost their respective elections last week.  State Sen. Alessandra Biaggi has sent a check to the Ben Franklin Club she says should be more than enough to remove her name from the sign.

No, she didn't lose her primary on Tuesday. She's just officially parting ways with the club.

"Over the last year or so, it just become clear that my values are not aligned with the leadership of the club, which is fine," Biaggi told The Riverdale Press. "So I'm going to start my own club."

The senator has few details on what this new political club would involve, as she's still gathering people to help her organize it. But one thing is clear, while Biaggi will welcome all members — even if they maintain membership with the Ben Franklin Club — this is going to be a club designed to offer an alternative for Democrats who don't feel the existing leadership of the Ben Franklin Club is listening.

"It's the early stages, and it's going to take time to be thoughtful about what it looks like and about what the goals are, and what a modern political club is," Biaggi said. "But it's really important that our political infrastructure is reflective of the future."

The Ben Franklin Club was formed in 1959 by Frank Montero, Bob Rubinstein and Stan Cohen to continue the fight already waged by Eleanor Roosevelt's Lexington Democratic Club against a resurging Tammany Hall political machine.  The club was a leader in the borough, with its endorsement coveted, because it meant its membership would travel throughout the Bronx to ensure that candidate got all the votes he or she needed.

But in more recent years, the power of the club began to wane. In 2018, when Biaggi originally challenged longtime state senator Jeffrey Klein, many of her supporters tried to join the club to help win its endorsement. They failed, yet Biaggi's primary win over Klein was decisive despite not getting the Ben Franklin Club's support.

Earlier this year, club president Michael Heller was expecting an easy re-election. That is until a so-called "alternate slate" of candidates was introduced, backed by Biaggi and state Sen. Gustavo Rivera. One member of the Ben Franklin Club leadership, Bruce Feld, told The Press at the time that Rivera's actions backing the alternate slate in an open election was "disloyal." Even before Rivera's involvement in the election became public, word spread enough through about 100 members of the club to almost deny him an endorsement for his senate seat.

"My values are not aligned with what the club's leadership is representing," Biaggi said. "So why would I pretend to be part of something that I don't feel aligned with? It's totally inauthentic to who I am and what I stand for, and it would be very fake of me to pretend like I want to be part of that club."

Heller and his "primary" slate won in an election that attracted club members from the furthest reaches of the borough, many who never appeared active with the club before. While the Ben Franklin Club said it was moving forward, its relationship with Biaggi and Rivera remained icy — even to the point that in an email blast to members just before the primary, the club mentioned all of its endorsements by name, except for the state senators, referring to them only as "incumbents."

Morgan Evers, who ran against Heller for the club leadership, has since started her own political group called Think National, Act Bronx, which she says won't compete with the Ben Franklin Club, but instead is designed to complement it.

"I think of the Democratic Party as inclusive," Biaggi said. "It's diverse. It's compassionate. It's all of the things that we all think about when we're campaigning, and that we live through when we're governing. But there isn't really a place for people to kind of congregate, and that's important."

A request for comment from Heller made late Wednesday morning is pending return.

Biaggi says she is gathering people who are looking for an alternative to the club to help organize it from the ground level. They can reach her through her campaign page for more information.