Some lawmakers suggest governor should be impeached 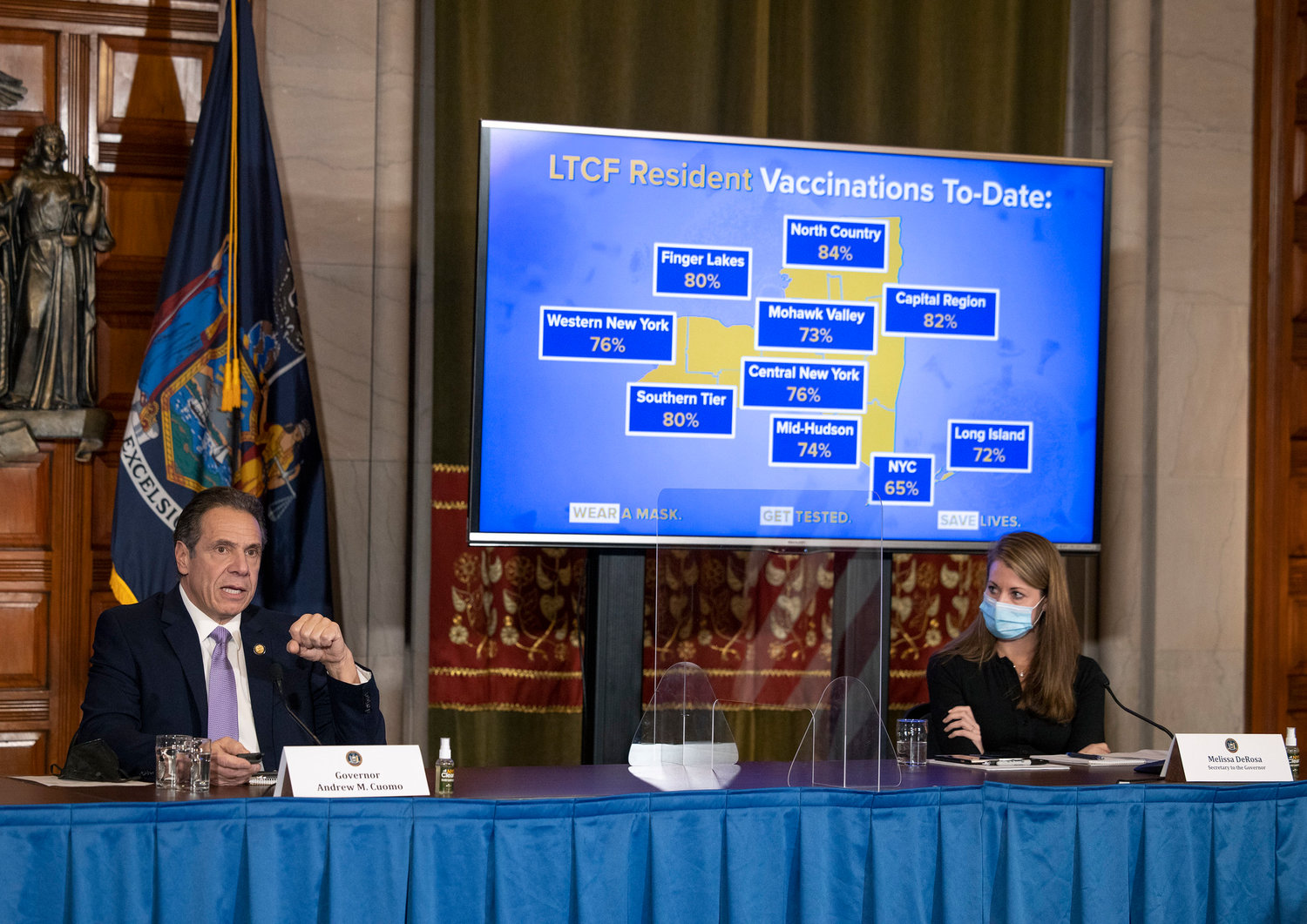 Gov. Andrew Cuomo and one of his top executives, Melissa DeRosa, right, are under fire from state lawmakers and even some prosecutors over how nursing home deaths related to the coronavirus pandemic were reported last year.
Courtesy of Mike Groll/Gov. Andrew Cuomo's Office 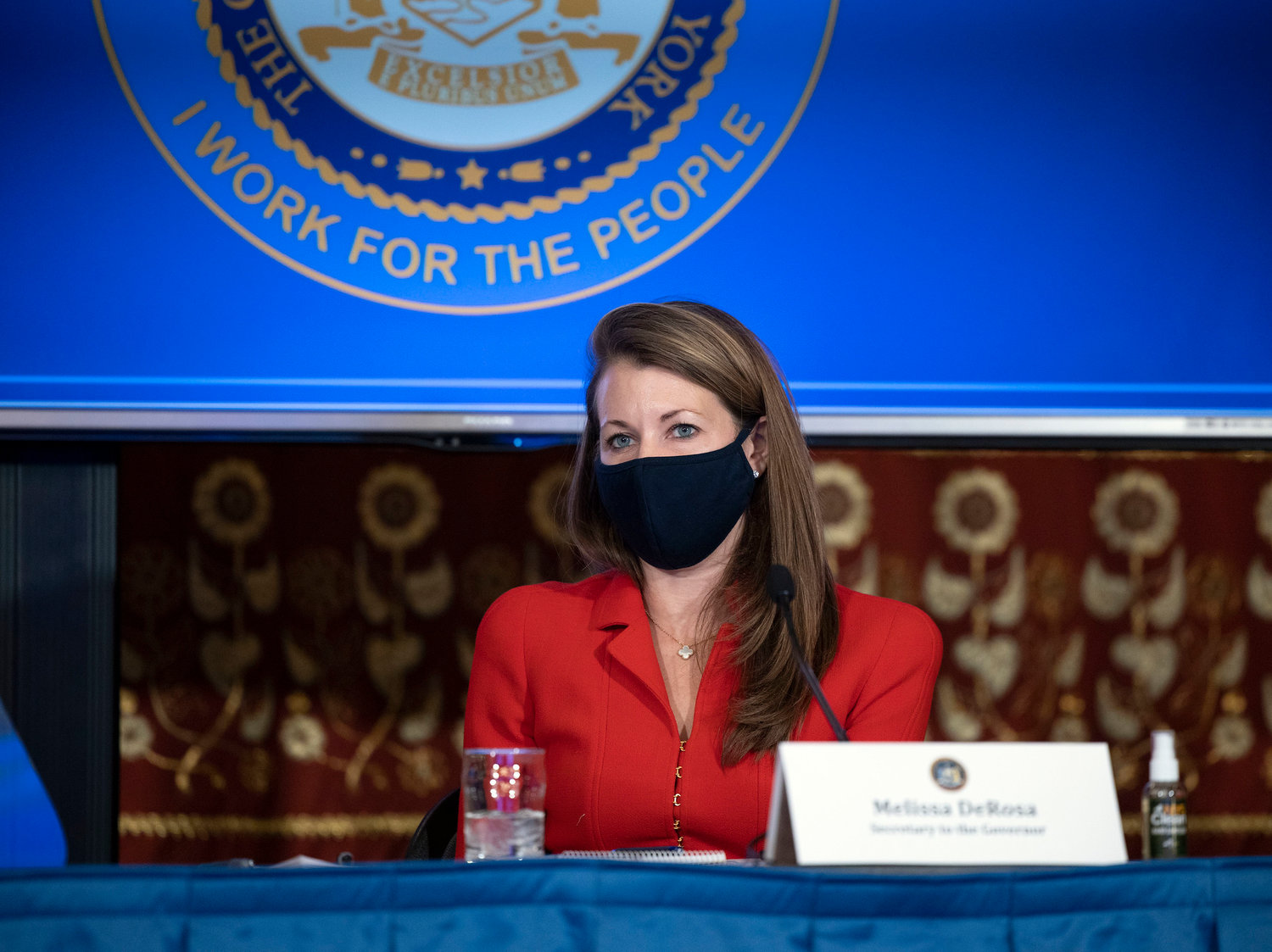 Melissa DeRosa, who is a secretary to Gov. Andrew Cuomo, reportedly told lawmakers in a phone call last week the administration 'froze' when they believed then-president Donald Trump might use his Justice Department as a political bulldog against the state.
Courtesy of Mike Groll/Gov. Andrew Cuomo's Office 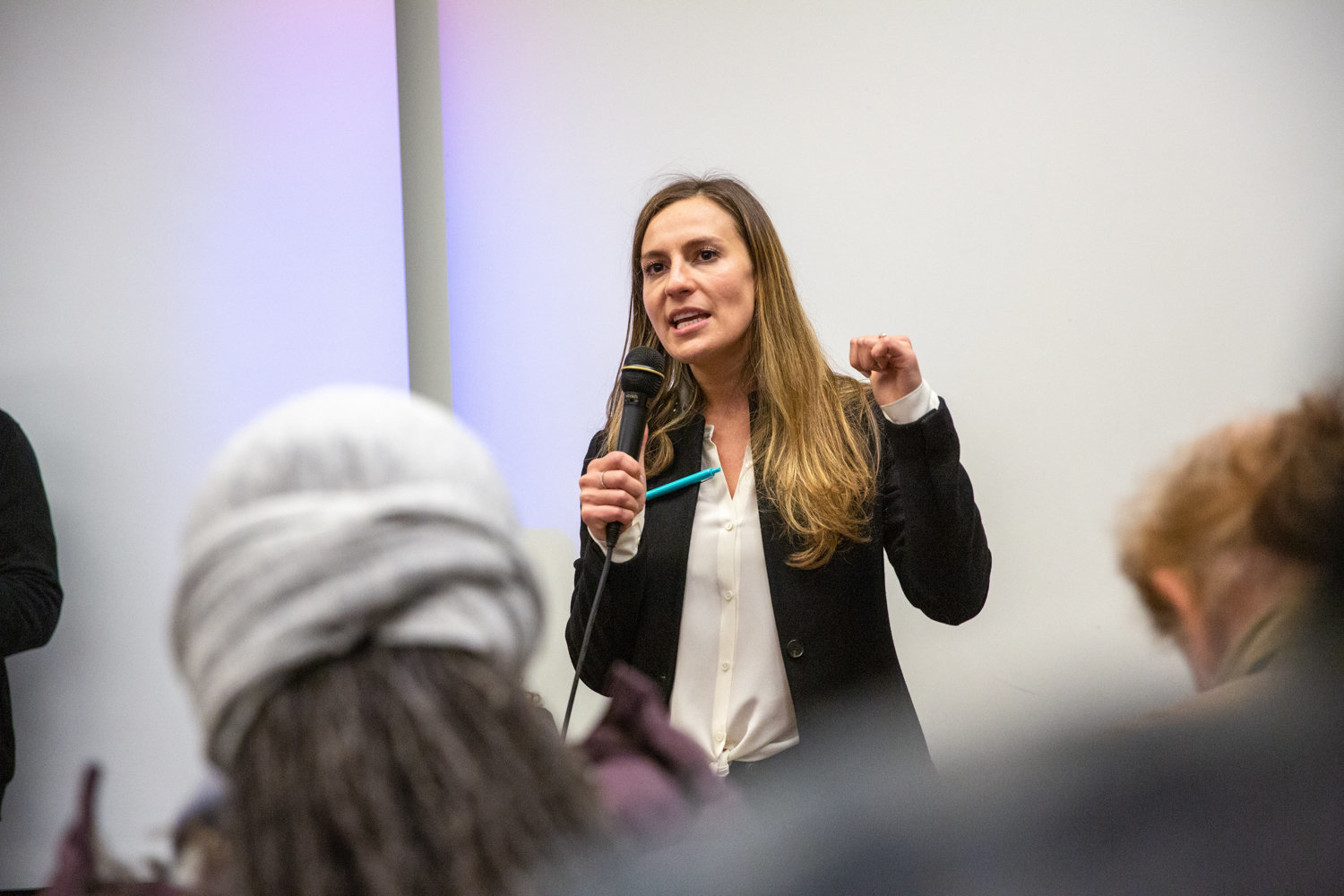 State Sen. Alessandra Biaggi not only backs claims Assemblyman Ron Kim made that Gov. Andrew Cuomo threatened him in a private phone call last week, but she's joining Kim to push legislation that would strip Cuomo of his expanded emergency powers in the wake of the coronavirus pandemic.
EIAN KANTOR / File 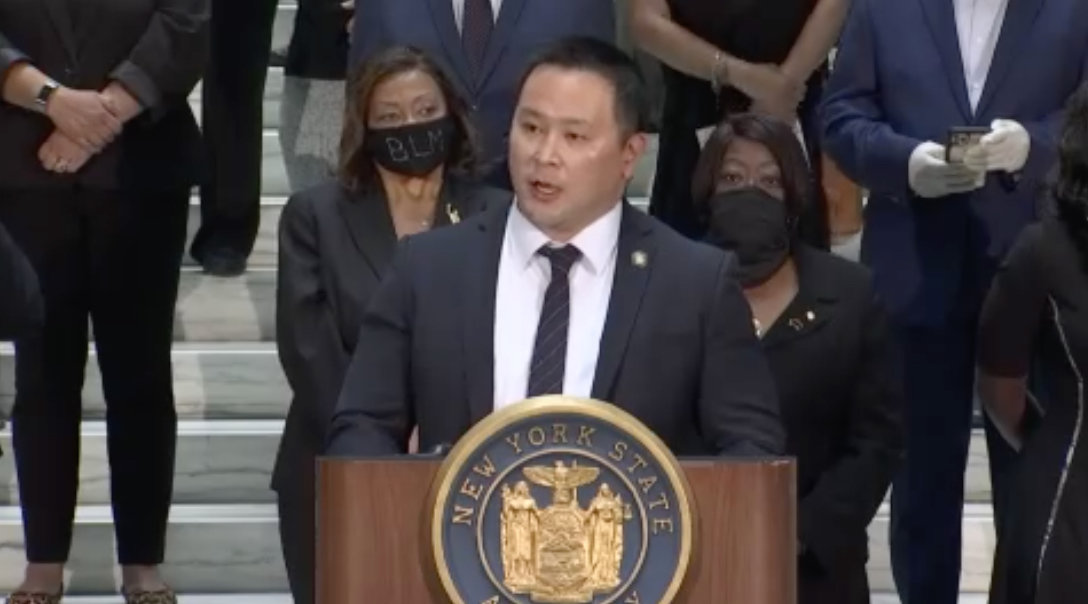 Assemblyman Ron Kim claims Gov. Andrew Cuomo called him last week and threatened him over comments he made to a newspaper claiming the executive branch may have violated the law when it withheld nursing home death statistics last year.
Previous Next
By MICHAEL HINMAN

State Sen. Alessandra Biaggi is ramping up attacks against Gov. Andrew Cuomo, as lawmakers and the state's executive office clash over how coronavirus deaths in nursing homes were reported last year.

Biaggi released a statement late Wednesday evening defending Queens Assemblyman Ron Kim, tying Cuomo's public criticism of the lawmaker with a rise in violence against Asian-Americans in the wake of the coronavirus pandemic.

"Gov. Cuomo's statements today about Assemblymember Kim are part of a disturbing pattern of behavior from the governor," Biaggi said, in a release. "Instead of accepting responsibility for mistakes, the governor has chosen to deflect blame and evade accountability time and time again."

Biaggi's statement comes a day after she joined Kim seeking support for a bill stripping Cuomo of expanded emergency powers that allow him to make unilateral decisions related to the pandemic. While lawmakers could override any decision with a simple majority vote, Cuomo pointed out earlier this week the legislature has yet to do so.

With eight of his Assembly colleagues, Kim sent a letter to lawmakers claiming the governor concealed the true number of coronavirus-related deaths in nursing homes, proving it's time to take that control back from Cuomo.

"This is a necessary first step in beginning to right the criminal wrongs of this governor and his administration," according to the letter.

In fact, Kim says rescinding those emergency powers won't be enough. He believes Cuomo should face an impeachment inquiry that could threaten the governor's very office.

"If this legislature fails to take collective action in stripping the governor of his emergency powers and engage in additional measures to seek the realization of justice ... then we, too, shall be complicit — along with this administration — in the obstruction of justice and conscious omission of nursing home deaths data."

Some lawmakers like Kim have questioned the data released on nursing home deaths almost since the beginning of the pandemic, when Cuomo allowed those hospitalized with the virus a chance to return to nursing homes. Critics of this move say Cuomo caused the virus to spread among vulnerable populations in these nursing homes, but the governor says facilities were only allowed to take these residents back if they had measures in place to keep them isolated from others.

The recent revision in total nursing home deaths — along with an investigation by state attorney general Letitia James —  has shined the spotlight back on Cuomo and his administration, and has soured his already tenuous relationship with several Democratic lawmakers.

Kim even went so far as to claim the governor called him last week and threatened to "destroy him" if he didn't fall in line with the Cuomo administration.

"Gov. Cuomo called me directly on Thursday to threaten my career if I did not cover up for Melissa (DeRosa) and what she said," the Assemblyman told CNN on Wednesday. "He tried to pressure me to issue a statement, and it was a very traumatizing experience."

Cuomo apparently called Kim about comments he made to the New York Post last week over a conference call DeRosa — who works as Cuomo's right hand — hosted with some lawmakers the day before, including state Sen. Gustavo Rivera. Kim claimed DeRosa admitted to not sharing the full extent of nursing home deaths last year, and that keeping that quiet helped Cuomo evade what the governor described as a politicized probe by Trump's Justice Department.

"No man has ever spoken to me like that in my entire life," Kim told CNN about his call with Cuomo. "At some point, he tried to humiliate me, asking, 'Are you a lawyer? I didn't think so. You're not a lawyer.' It almost felt like, in retrospect, he was trying to bait me and anger me and say something inappropriate. I'm glad I didn't."

Cuomo, however, remembers that call differently. In a conference call with reporters on Wednesday, the governor said Kim admitted the Post misquoted him, and that despite his efforts to have the newspaper correct the quote, they just wouldn't budge.

"I said, 'really?' 'Yes, she refuses to correct it,'" Cuomo said, according to a transcript provided by his office. "I said, 'Well, my suggestion is, you then do a statement where you put out your correct statement because, you know, if the reporter doesn't want to include it, fine. Then do a statement that corrects it.'"

Kim agreed to do just that, Cuomo said, but then never followed through.

"So, so much for Mr. Kim's credibility," the governor said. "And I said to him on the phone, 'You know, there is still integrity and honor and decency in politics,' but that's that for Mr. Kim."

Biaggi felt Cuomo's timing was much to be desired.

"Gov. Cuomo is choosing to attack Assembly member Kim at the same time we are seeing a disturbing rise in anti-Asian racism and violence in our state and across the country," Biaggi said. "Choosing to single out an Asian-American lawmaker is dangerous, and could have serious consequences."

On Tuesday, Cuomo called reports of DeRosa's comments a distortion of what was actually said on the Feb. 10 call, and said he took blame only for not providing information where there were obvious gaps, and thus allowing speculation to seep in. Cuomo's office released a transcript of the conference call in question Wednesday night, which revealed significant tension between DeRosa and several lawmakers — including Kim and Rivera.

According to the transcript, DeRosa's now infamous "mea culpa" was in response to a question by Orange County state Sen. James Skoufis about the delay getting nursing home data released to lawmakers months after they sent a letter to DeRosa asking for it.

"I don't know that this is going to satisfy you, but it's the truth and the truth works almost every time," DeRosa said, according to the transcript provided by the governor's office. "The letter comes in at the end of August, and right around the same time, President Trump turns this into a giant political football. He starts tweeting that we killed everyone in nursing homes. He starts going after (New Jersey governor Phil) Murphy. Starts going after (California governor Gavin) Newsom. Starts going after (Michigan governor) Gretchen Whitmer.

"He directs the Department of Justice to do an investigation into us. He finds one person at DOJ ... who sends letters out to all of these different governors. And basically, we froze, because then we were in a position where we weren't sure if what we were going to give to the Department of Justice or what we give to you guys — what we start saying was going to be used against us while we weren't sure if there was going to be an investigation."

DeRosa said she went to "the leaders" and asked to pause the legislature's requests until after they navigated past the Justice Department, which ultimately dropped any investigation.

Now, however, Cuomo faces inquiries not only from Letitia James, but also reportedly from the U.S. Attorney's Office in Brooklyn, as well as the FBI.

And Kim himself is hearing nothing of what Cuomo is offering.

"This administration was grossly under-reporting nursing home deaths by as much as 50 percent and withholding information about the situation to federal and state officials," Kim said in a statement Wednesday night, claiming such moves helped health care lobbyists who had donated to Cuomo's campaign in the past.

"As legislators, we have a duty to uncover the truth behind the nursing home deaths, and the governor's explanations don't add up."

"The governor can smear me all he wants in an effort to distract us from his fatally incompetent management. But these facts are not going away because they are the facts — unacceptable facts that hold him accountable."

CORRECTION: Assemblyman Ron Kim sent a letter to lawmakers co-signed by eight of his colleagues calling for support of not only stripping Gov. Cuomo of emergency powers, but also openly considering impeachment. An earlier version of this story included state Sen. Alessandra Biaggi  in that letter, but she was not one of the lawmakers who participated in that specific correspondence.