Unlike most other electeds, the one-time congressional candidate is still lights out inside her office 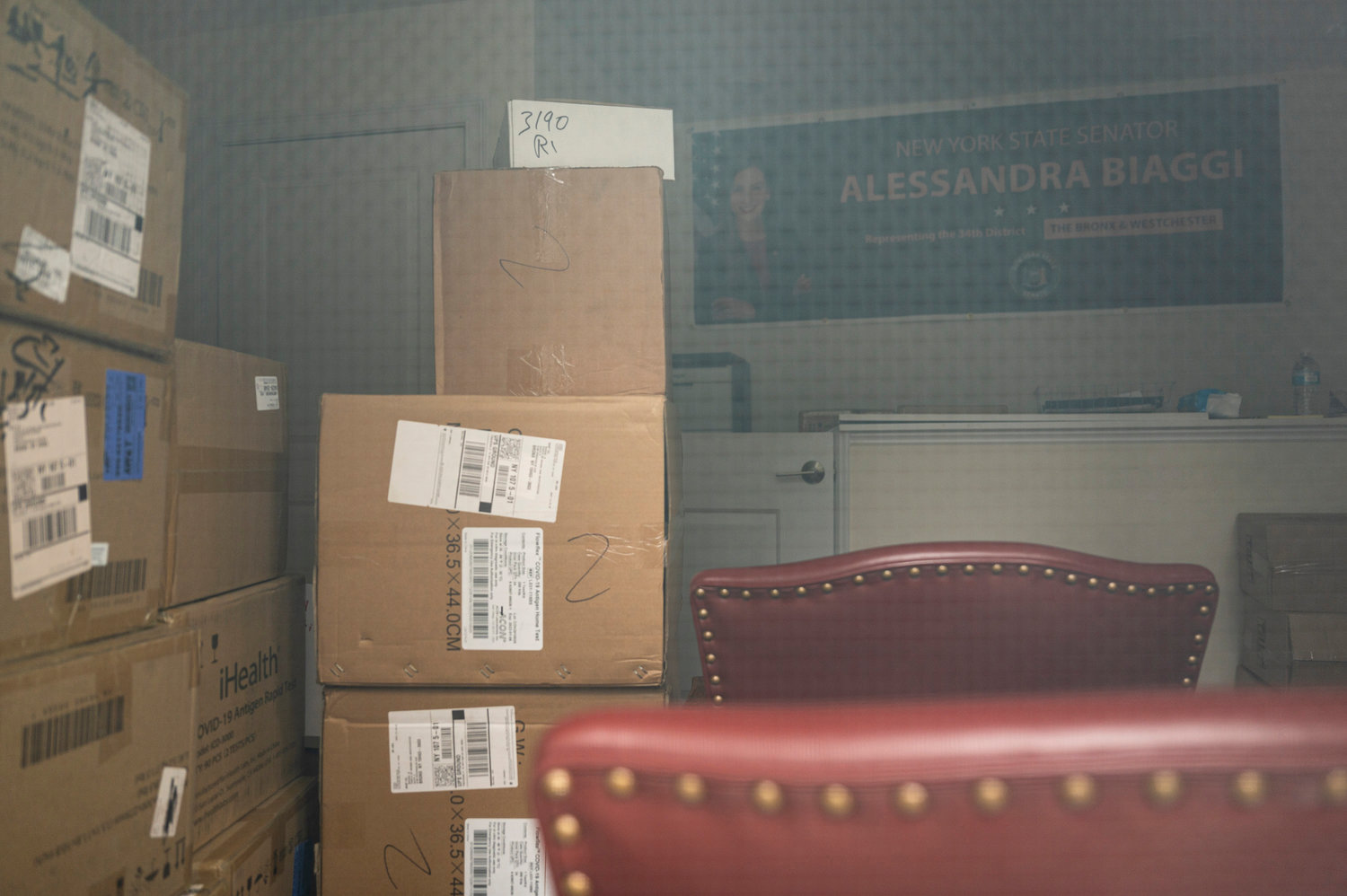 A view inside New York state Sen. Alessandra Biaggi district office on Sept. 7. Since the beginning of the pandemic, the senator’s office has been closed to walk-in services.
Hiram Alejandro Duran 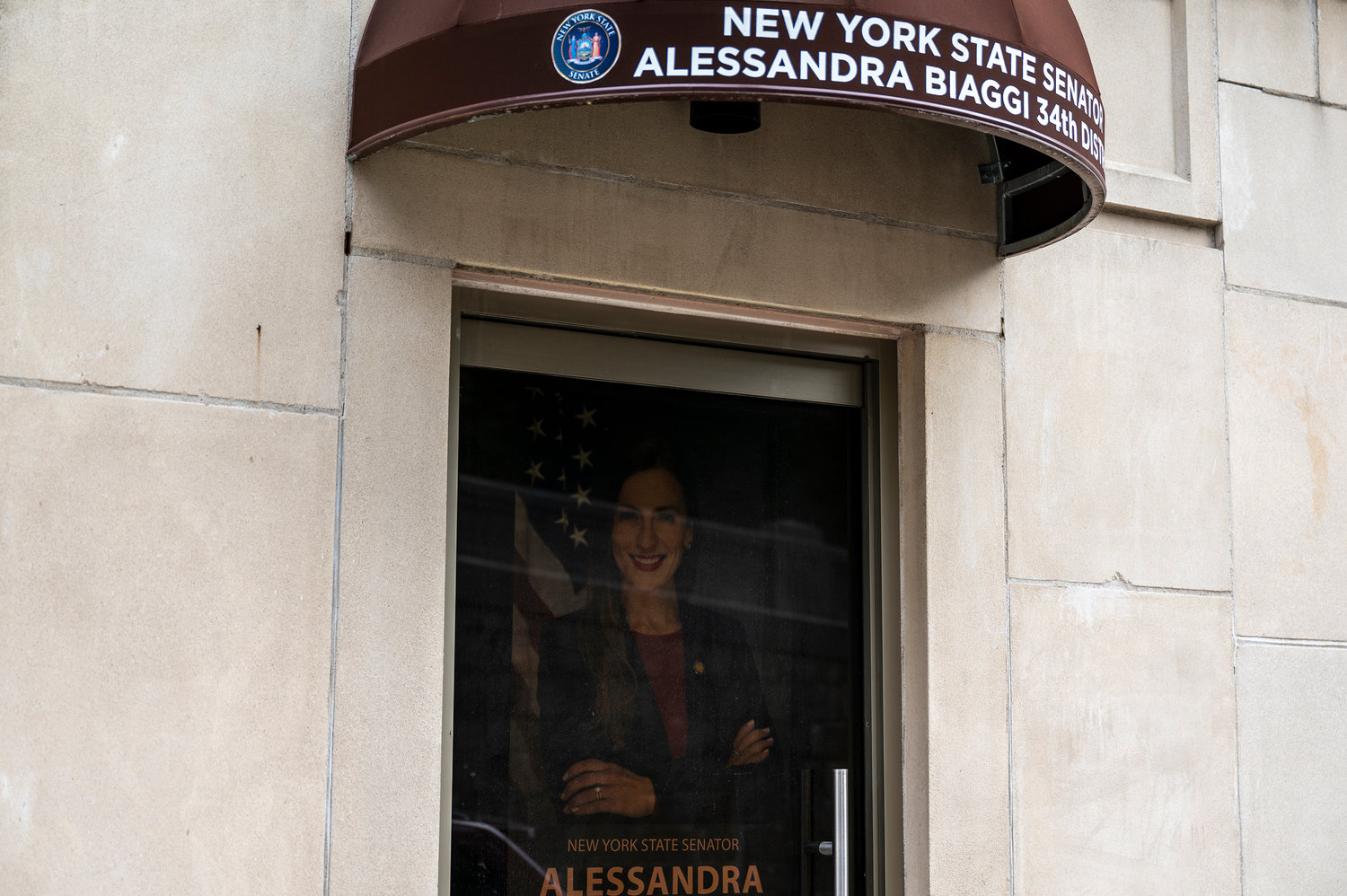 A view inside New York state Sen. Alessandra Biaggi district office on Sept. 7. Since the beginning of the pandemic, the senator’s office has been closed to walk-in services.
Hiram Alejandro Duran
Previous Next
By Sachi McClendon

State Sen. Alessandra Biaggi has had a busy election season.

In February, she decided to vacate her state senate seat that she won in 2018 in order to run in the short-lived 17th Congressional District, after originally trying to run for Long Island Democrat  Tom Suozzi’s seat.

Then the courts struck down those congressional lines, leading Biaggi to take on the chair of the Democratic Congressional Campaign Committee, Sean Patrick Maloney, in the newly redrawn 17th congressional district — which now includes parts of Westchester, Rockland, Putnam, and Dutchess counties. During the campaign, she bought a house in Bedford — outside of her current senate district.

Although she is no stranger to upset victories, in the end Biaggi was no match for Maloney. She managed only to capture about a third of the vote.

But not Biaggi. In fact, her office is the only one in the area that is still closed to the public — its door locked, the lights turned off.

According to Biaggi’s spokesperson, Misbah Farooqi, the office, which is rented for nearly $4,000 a month, is still closed in order to protect the health and well-being of both her staff and the public. And constituents can schedule in-person meetings in advance.

However, Farooqi did not commit to returning to in-person walk-in services for the remainder of the senator’s time in office, which runs until the end of the year.

“As we continue to monitor COVID-19 heading into the winter months, we will take all necessary measures to both keep staff safe and healthy, and continue to provide holistic and accessible constituent services,” she said.

Farooqi added there is a staff member in the office four days a week during typical business hours and that anyone who comes to their office will not be turned away.

That said, a reporter for The Riverdale Press visited the office on multiple occasions and was unable to get anyone to open the door for him. Only after The Press informed Biaggi’s team of the story did a staff member unlock the door on Monday.

For Kathy Solomon, who sits on the steering committee for Northwest Bronx Indivisible, re-opening the district office is the least Biaggi could do.

“I think it’s a baseline thing for a representative to have their office available — to have an office for people to go into,” she said. “There’s a responsibility there.”

Charles Moerdler, who is on Community Board 8, is of the opinion that Biaggi has paid little mind to local concerns and issues during her time in office. For example, he said Biaggi was “totally out to lunch” for a recent controversy over a proposed homeless men’s shelter at the corner of Broadway and West 262nd Street.

While Biaggi does support the shelter, Moerdler said she never heard out those, particularly community board members, who were and still are rallying against the push. “When the community board is holding public hearings on whether it should be supportive of or opposing it,” Moerdler said. “At least participate to the extent of making your views known.

“Do you represent the district? Not in the sense of ‘will you do what they tell you’ but ‘will you hear them out?’”

The question remains what Biaggi has left to do in the state senate. This year’s legislative session has come and gone. There are no longer any other races to jump into. And as her campaign website reads, “I can proudly say that we have accomplished 100 percent of my 2018 campaign promises.”

In response to a series of questions from The Press, Biaggi’s office said “continuing to provide robust constituent services” was one her top priorities, along with ensuring a smooth transition between her office and the offices of Senator Gustavo Rivera and soon-to-be Sen.-elect Nathalia Fernandez.

Farooqi also noted that Biaggi’s office has handled more than 3,000 cases since the beginning of the pandemic and that they have only received positive feedback on matters related to their constituent services.

In a recent newsletter, Assemblyman Dinowitz highlighted Biaggi’s recent real-estate purchase, and urged constituents to reach out to him if they were struggling to get in touch with her office.

“I have always believed that constituent services are a vital and central part of the job we do as elected officials, even if the explicit focus of our role is to legislate,” he said in a statement to The Press. “People in our community need help, they have concerns, they have ideas, and it is important that we create a dynamic where people know that I am available to them.”

In response, Biaggi said she is more than capable of both running for office and providing for her constituents, writing, “Like all women, I am able to walk and chew gum at the same time, and will have no trouble fulfilling my duties this fall.”