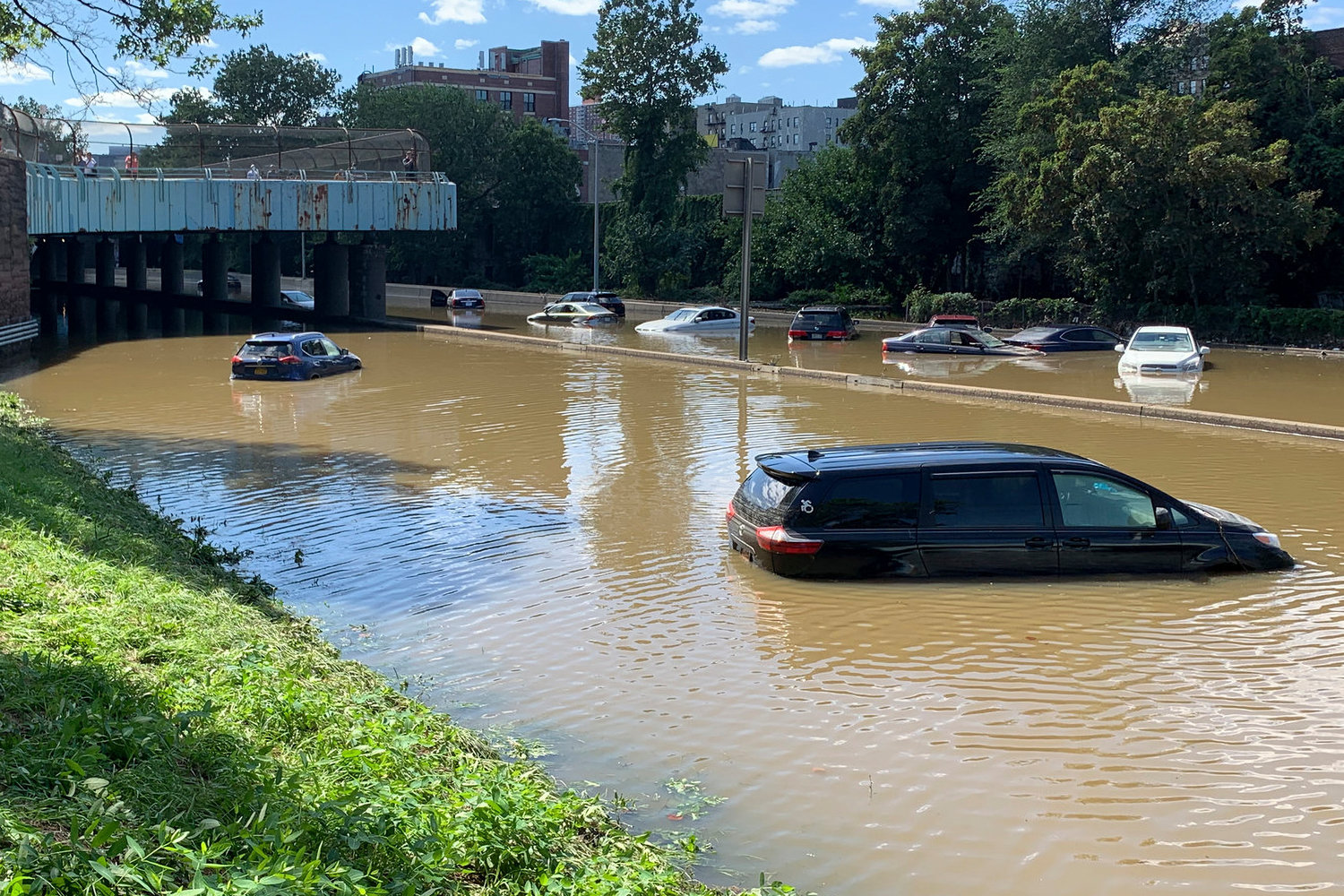 Large sections of the Major Deegan Expressway was shut down through Kingsbridge after massive flooding turned the expressway into river. Hundreds of millions of dollars are set aside for flood mitigation in the new environmental bond act, which is up for a vote in November.
Michael Hinman / File 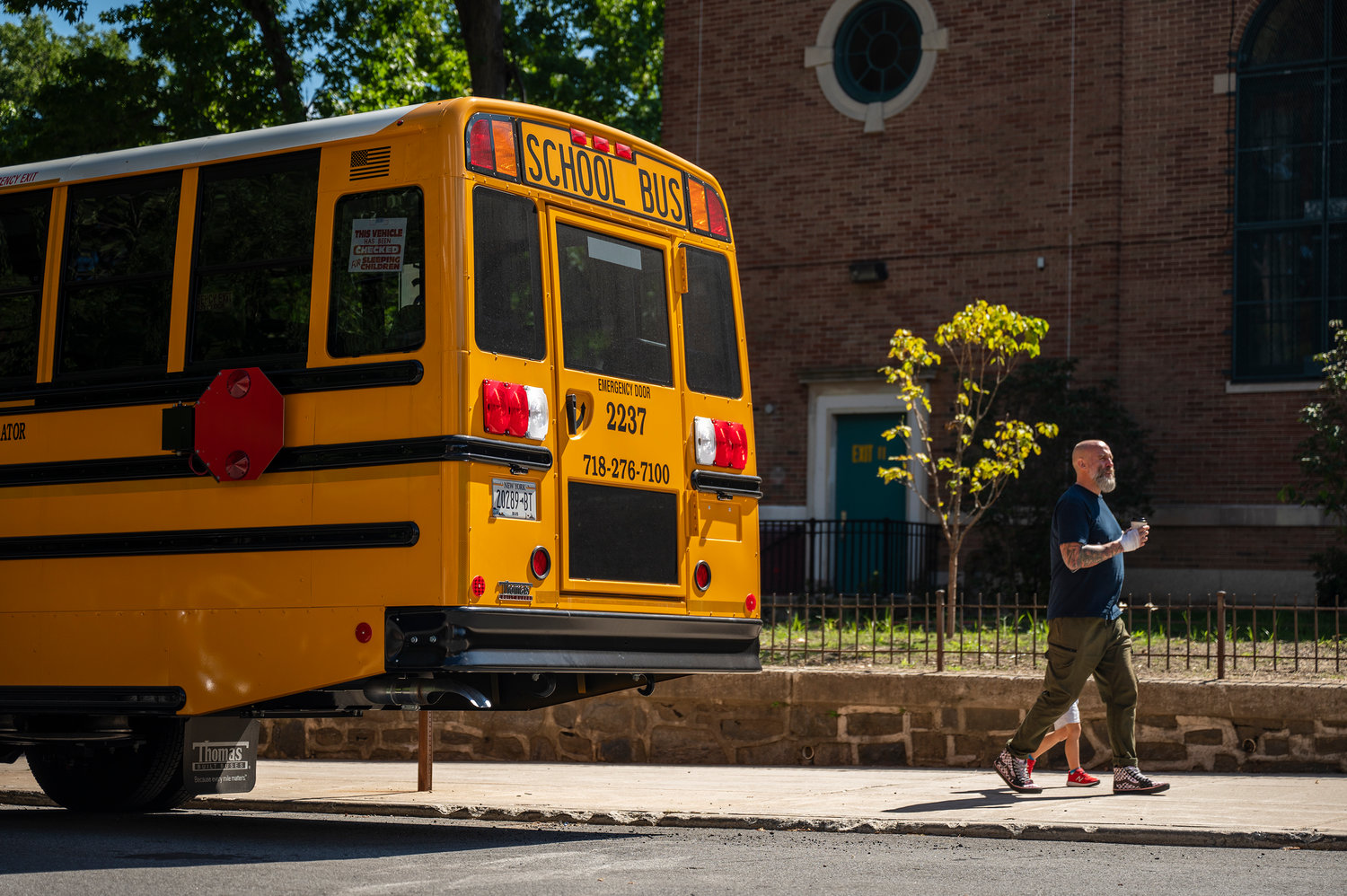 A school bus parked outside of P.S. 81 waits for students on Sept. 14. A state-wide ballot referendum would address zero-emission school buses.
Hiram Alejandro Durán
Previous Next
By Sachi McClendon

Just when you thought the election season was over, there is something else voters have to focus on in the general election other than the gubernatorial election and some competitive congressional races. There are four ballot initiatives to ponder.

The first initiative — known as the 2022 Clean Water, Clean Air, Green Jobs Bond Act — would, if approved, enable the state to issue $4.2 billion in bonds to fund capital projects that would combat the effects of climate change and on-going damage to the environment. These multi-year investments would go toward reducing flood risks, improving wastewater infrastructure and conserving wetlands. More than $1 billion would be set aside for climate change mitigation, like green building projects and zero-emission school buses.

This environmental bond act is really an updated version of a similar referendum that was supposed to be up for a vote in November 2020. That act would have allocated $3 billion toward environmental projects, but was taken off the ballot at the onset of the pandemic, which many at the time were predicting would trigger an equally catastrophic financial crisis.

Once Gov. Kathy Hochul came into power, she made a second push for the act, but increased the dollar amount by $1.2 billion. Both chambers then passed the updated legislation in April. Yet according to the state’s constitution, the state must seek approval from voters before it can begin issuing bonds.

Beyond reducing the effects of climate change, those who are in favor of the measure — which would be the largest environmental ballot initiative in New York’s history — argue that it would support more than 84,000 jobs, boost the state’s economy by billions of dollars, and improve public health. As part of the act, a portion of the funding must be dedicated to projects that would benefit disadvantaged communities.

“Every single county in New York state has had a climate event in the past 10 years. Whether you are a coastal, riverine, or Great Lakes community — or care about clean water, clean air and good jobs, there is something in this bond act for you,” said Amy Chester, the managing director at Rebuild by Design.

“Our environmental infrastructure obligations are enormous, and this proposal would allow our state to access billions of dollars for critical improvements, including to address many issues which are of local concern,” he said to The Riverdale Press in a statement. “For example, this funding could be used to help install stormwater mitigation measures to prevent our community from being flooded whenever it rains harder than a downpour.”

The last time an environmental bond act was up for a vote statewide was back in 1996. That referendum paved the way for millions of dollars in water-infrastructure upgrades and air-quality improvement projects.

Even though the combined price tag for these environmental projects is in the billions of dollars, voters don’t have to worry about that money coming out of their pocket.

“Taxpayers will not see an increase in their state taxes as a result of the environmental bond act moving forward,” a spokesperson from the governor’s office told The Press “These projected payments are already accounted for in the state’s long-term financial plan.”

If passed, the state will begin issuing the general obligation bonds right away.

New York City residents will vote on three other measures, in addition to the environmental bond act.

The first city-wide measure would add a statement of values to the city charter to guide the government toward “a just and equitable city for all.” The preamble would acknowledge that the city sits on “the traditional territories of the original inhabitants, the Lenape,” while also addressing the “grave injustices and atrocities that form part of our country’s history.” If approved, the preamble would serve as a touchstone for how the city government carries out its duties.

In a similar vein , a second proposal would mandate that each city agency produce a racial equity plan every two years, which would be overseen and reviewed by an entirely new department within the administration — the Office of Racial Equity.

The final vote is on whether the government should begin to use a new formula for calculating the true cost of living in the city. This ballot measure was recommended by former Mayor Bill de Blasio’s Racial Justice Commission, which argued that the current measure fails to factor in the additional, yet essential, costs of living in New York City.

If voters approve the measure, then the government would not be able to factor in any public or private monetary assistance a person is eligible to receive — a significant change from how things are done now.

This measure comes as the cost of everything, from rent to groceries, has soared over the past year due to inflation. According to the news outlet City Limits, the median monthly rent in the Bronx is up from $1,650 in August 2019 to $1,900 last month for a one-bedroom apartment.