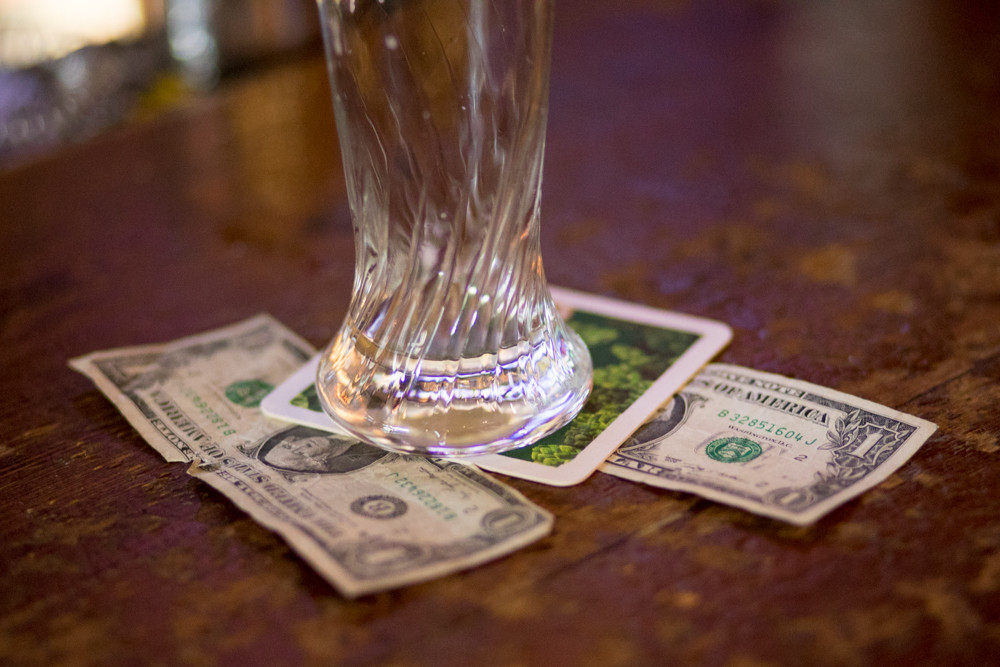 A $2 tip rests under an empty glass at the Bronx Ale House in Kingsbridge. Owner James Langstine supports the state’s tipped wage credit — which allows restaurants to pay tipped employees less than the minimum wage as long as their tips make up the difference. That’s because, he says, it benefits servers, bartenders, customers, and establishments like his own.
JULIUS CONSTANTINE MOTAL 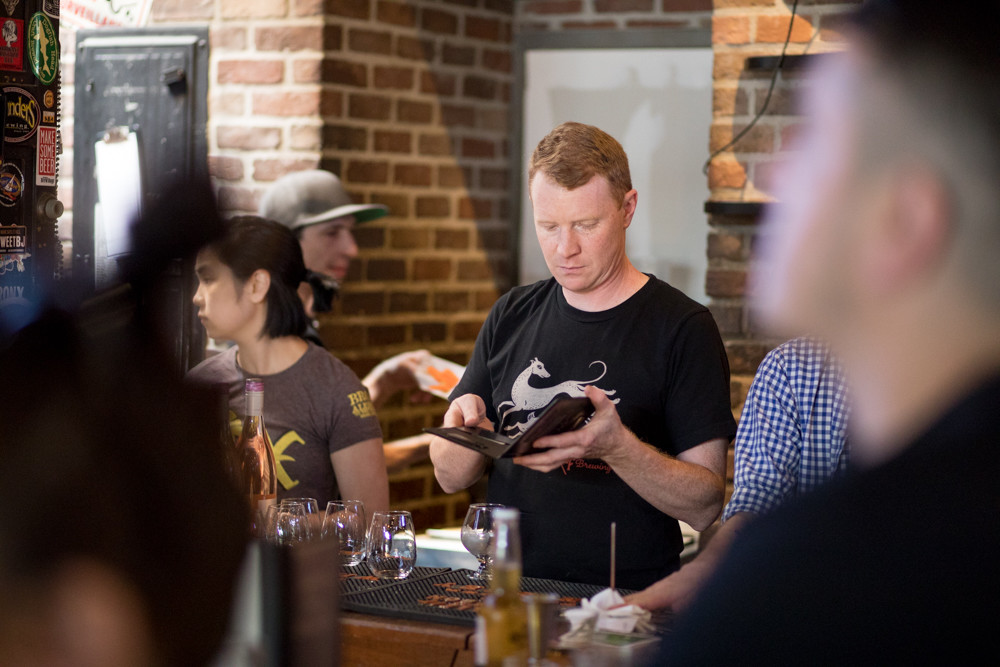 James Langstine, owner of the Bronx Ale House on West 238th Street, looks over a check at the bar. Langstine favors the state’s tipped wage credit, which allows restaurants to pay tipped employees less than the minimum wage as long as their tips make up the difference. Sarah Jessica Parker and other actors have urged Gov. Andrew Cuomo to consider raising the minimum wage for tipped workers — to the outrage of some servers.
JULIUS CONSTANTINE MOTAL 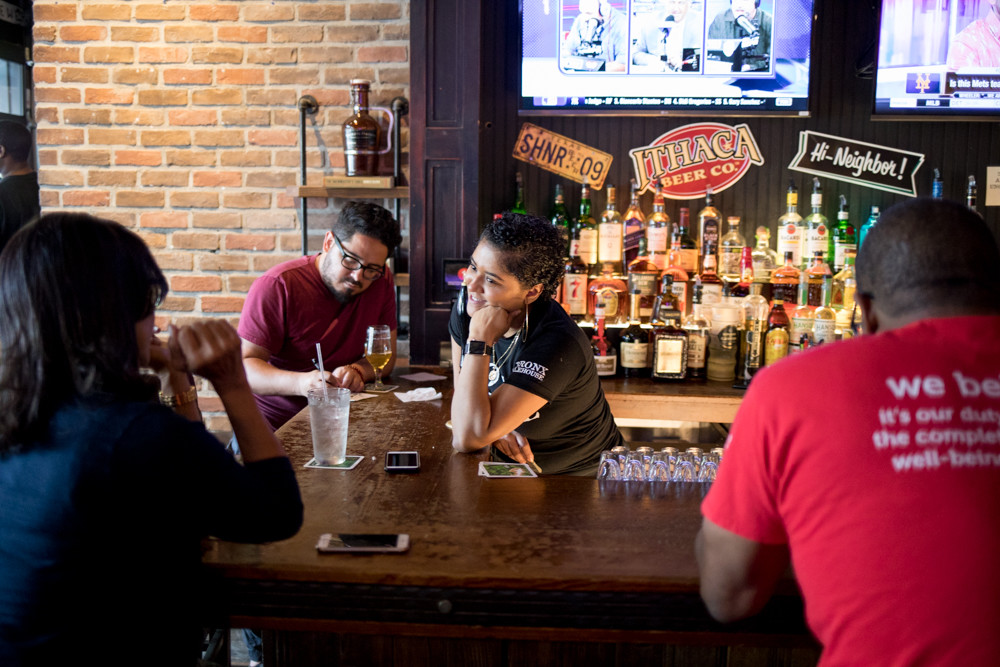 Mina Muñoz, a bartender at the Bronx Ale House in Kingsbridge, talks with a customer. Owner James Langstine opposes eliminating the tipped wage credit — which allows restaurants to pay tipped employees less than the minimum wage as long as their tips make up the difference — arguing it could force him to raise prices to stay in business.
JULIUS CONSTANTINE MOTAL 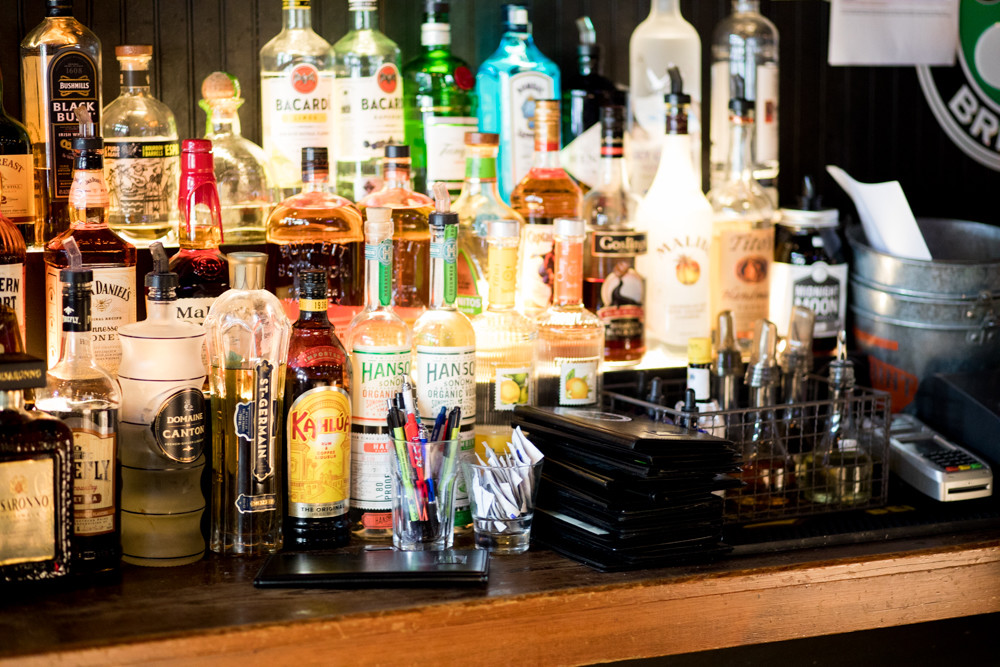 Check presenters rest near the booze in the Bronx Ale House on West 238th Street. Owner James Langstine supports the state’s tipped wage credit, which allows restaurants to pay tipped employees less than the minimum wage as long as their tips make up the difference. But some restaurant workers and advocates argue it forces employees to put up with harassment to earn a living.
JULIUS CONSTANTINE MOTAL
Previous Next
By ZAK KOSTRO

Where you work could determine your answer.

It can be a dark, dirty and grueling industry. The hours are long, the labor strenuous.

But bars and restaurants also can be lucrative, offering quick cash for the servers, bartenders and others who work in them.

In fact, the money’s good enough that at least some employees defend a system that sees them hustling for tips even though they’re paid less than minimum wage.

A coalition of civic leaders, restaurant owners and servers have slammed “Sex and the City” star Sarah Jessica Parker after she and other actors urged Gov. Andrew Cuomo last March to end the state’s minimum wage tip credit, according to published reports. That credit allows restaurants to pay tipped employees less than the minimum wage as long as their tips make up the difference.

Depending on where a restaurant is located, tipped wages for employees is between $8 and $8.65 in the city depending on the size of the employer, according to the Department of Labor. Eliminating the tip credit would mean employers would have to pay tipped workers an additional $4 or so an hour, raising wages up to current minimum wage of $13 an hour, depending on the number of people employed.

Some supporters of the change argue the tipped work force — which also includes car wash employees and nail salon workers among others — shouldn’t have to rely on tips while putting up with harassment to earn a living. And indeed, some workers agree.

“I imagine that if they would have taken time to go around the state, speak with local restaurant owners and tipped workers, they would not have jumped on the bandwagon of this movement,” Rigie said. “There’s a lot of misinformation out there.

“To an extent, it’s disingenuous to say if you eliminate the tipped credit you’re going to eliminate sexual harassment. This is a societal issue that we must address.”

While harassment in the workplace plagues virtually every industry, owners of at least two Kingsbridge establishments — including the Bronx Ale House and Tibbett Diner — argue that when it comes to running their business, the tipped system not only is fair, but profitable for both proprietors and the wait staff.

“I’m certainly in favor of the system the way it is,” said James Langstine, who owns Bronx Ale House. “From a business perspective, going up to a $15 minimum wage would significantly hurt our profit margin.”

The bottom line isn’t the only thing that would take a hit, however.

“It would also hurt our customers because the only way to even try to come close to that and make it a viable business,” Langstine said, “would be by significantly raising prices.”

And Langstine, a former barkeep himself, predicts his employees also would suffer.

The two-tiered wage structure “is much more favorable to our servers who get tips, because they’re probably almost always making well over minimum wage,” Langstine said. “If you eliminated the tips, it would put our servers in more of a place of poverty, as opposed to this being a job where you can squirrel away some money, or work part-time while you’re pursuing school.”

Yet, fears owners and employees would lose out if Cuomo raised their industry’s minimum wage is unfounded, said Catherine Barnett of Restaurant Opportunities Centers United’s New York chapter, which advocates for restaurant workers. She points to a report from the Institute for Policy Studies showing that when New York raised the tipped minimum wage in 2015, its counties saw better wages and better restaurant performance compared to Pennsylvania counties where the tipped minimum wage has not increased.

“If we look at other states that are paying one fair wage, including the one that has the most comparable economy to New York, which is California,” Barnett said, “restaurant openings, sales, employment, tips, are all doing very well.

“We know that states that have one fair wage” — Alaska, California, Minnesota, Montana, Nevada, Oregon and Washington — “have lower rates of attrition,” or employee turnover, Barnett added, “because if you are paying better, you have better retention.”

While some bartenders and servers in the Meatpacking District may be hauling in hefty wads nightly, Barnett believes those figures must be kept in perspective.

“Front-of-house tipped positions are not just bartending and server positions,” Barnett said. “They’re also bussers, bar backs, runners, and in some cases, baristas. What they receive in tips can vary very greatly.”

Notably, in the “one fair wage” states, tipping hasn’t gone away, Barnett said, with tipping rates in California even higher than they are in New York.

“The conversation about raising wages has nothing to do with doing away with tips,” Barnett said. “When customers tip, I would argue — especially in restaurants — people are not tipping because they’re conscious about trying to make up a staff person’s wage. They’re tipping because of what they perceive as service.”

Yet, while some restaurant owners in the state already support “one fair wage,” paying staff better than they have in prior years, others remain skeptical. Langstine, for one.

“The more you increase the overhead in a business where the margins can be fairly thin to begin with, that’s probably more likely when people, unfortunately, would lose jobs,” Langstine said. “I would hope that we, personally, would be able to weather the storm and figure something else out to keep everybody working. But who knows, if that ever becomes a reality.”