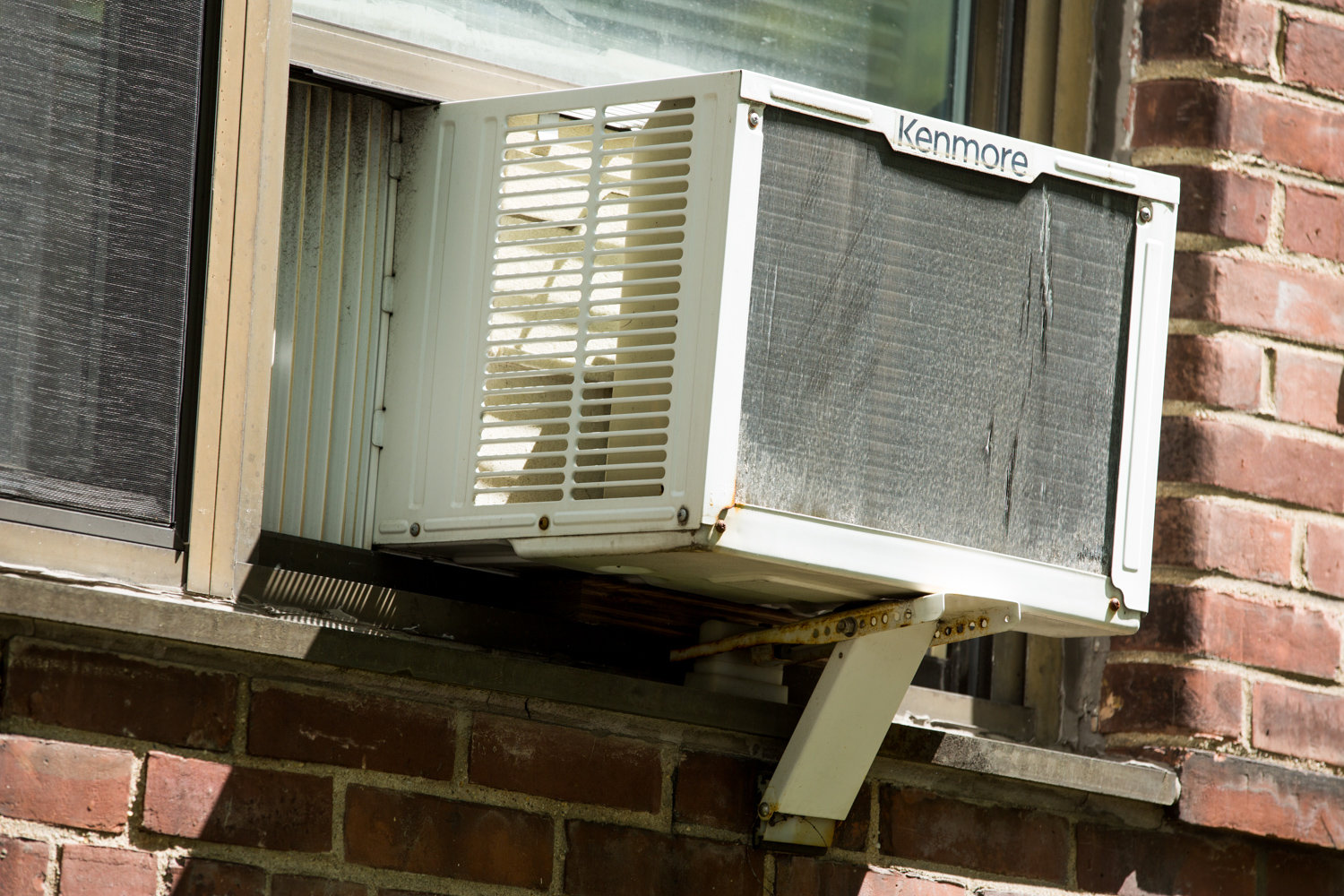 As the weather heats up, people are going to want to keep cool, although not everyone has an air conditioner. To that end, Mayor Bill de Blasio says he’ll buy 74,000 air conditioners to help those living in the hottest homes.
JULIUS CONSTANTINE MOTAL 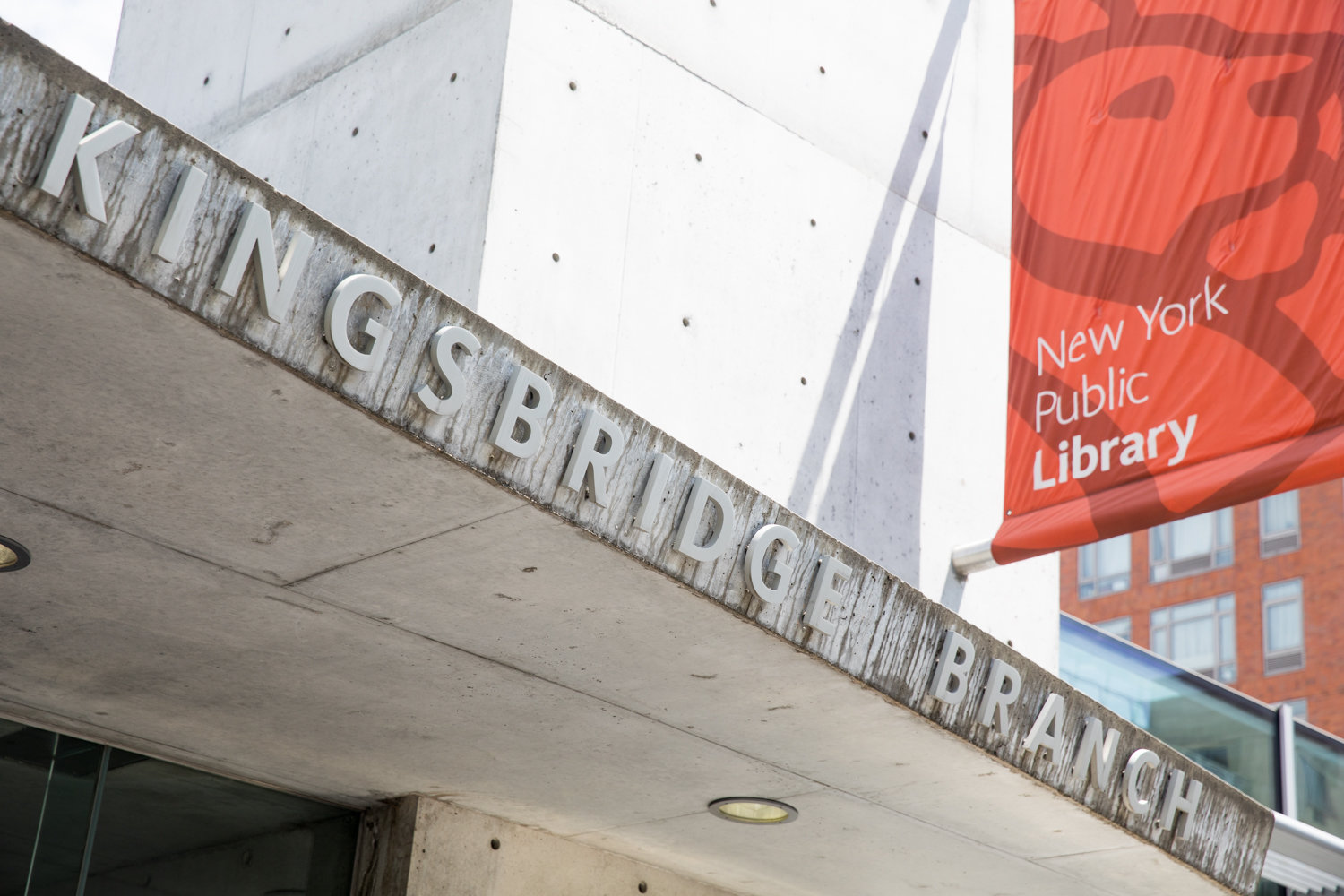 In any other year, the Kingsbridge Library, like other branches, would be a designated cooling center in the hot summer months. But with many places temporarily closed due to the coronavirus pandemic. It’s unclear when libraries will reopen, but Mayor Bill de Blasio says he’ll buy 74,000 air conditioning units to stop many from overheating at home.
JULIUS CONSTANTINE MOTAL 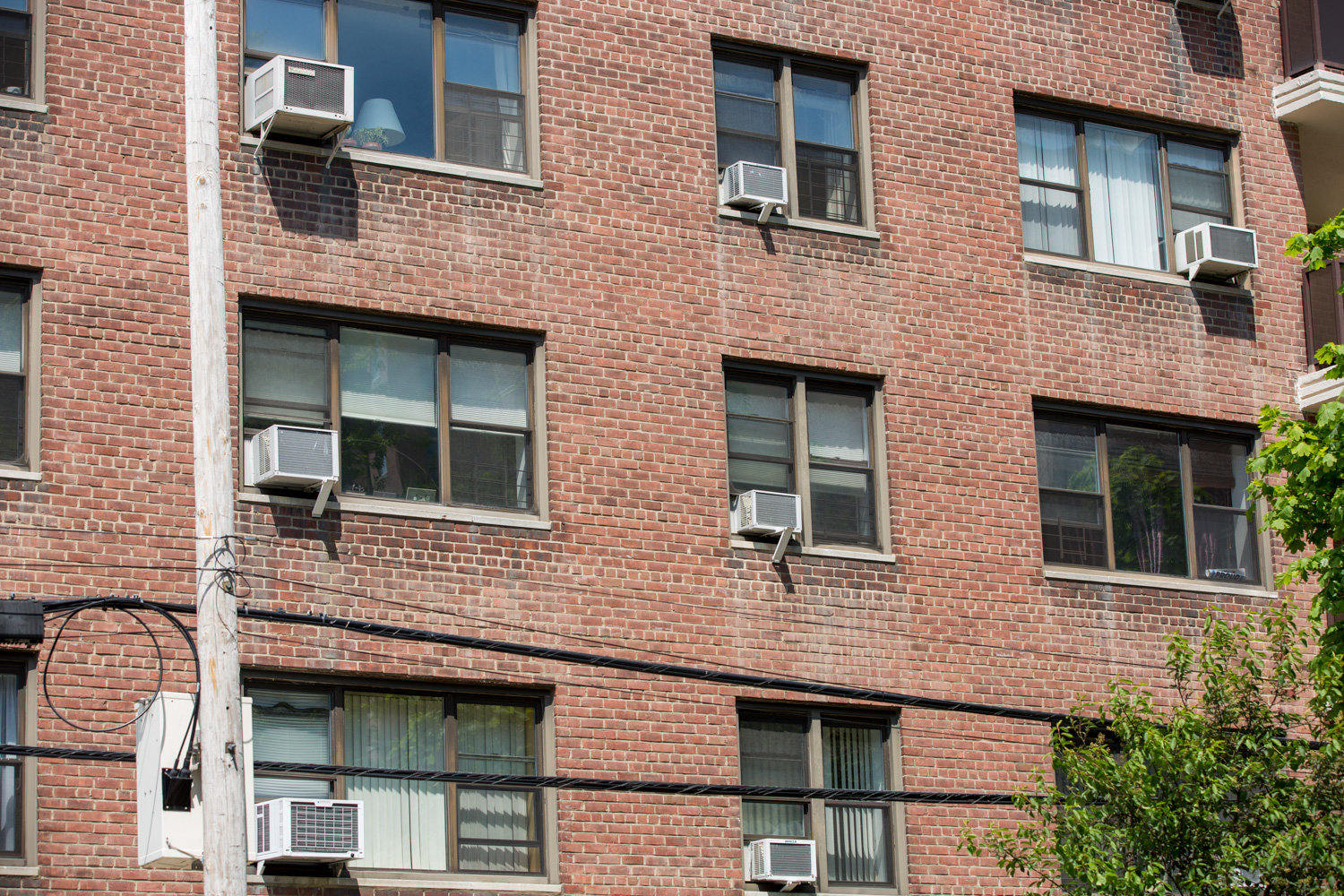 Air conditioners are crucial in the summertime, but not everyone has one. At the same time, libraries and other ‘cooling stations’ are likely not going to open because of the coronavirus pandemic. To that end, Mayor Bill de Blasio says he will buy 74,000 air conditioners.
JULIUS CONSTANTINE MOTAL 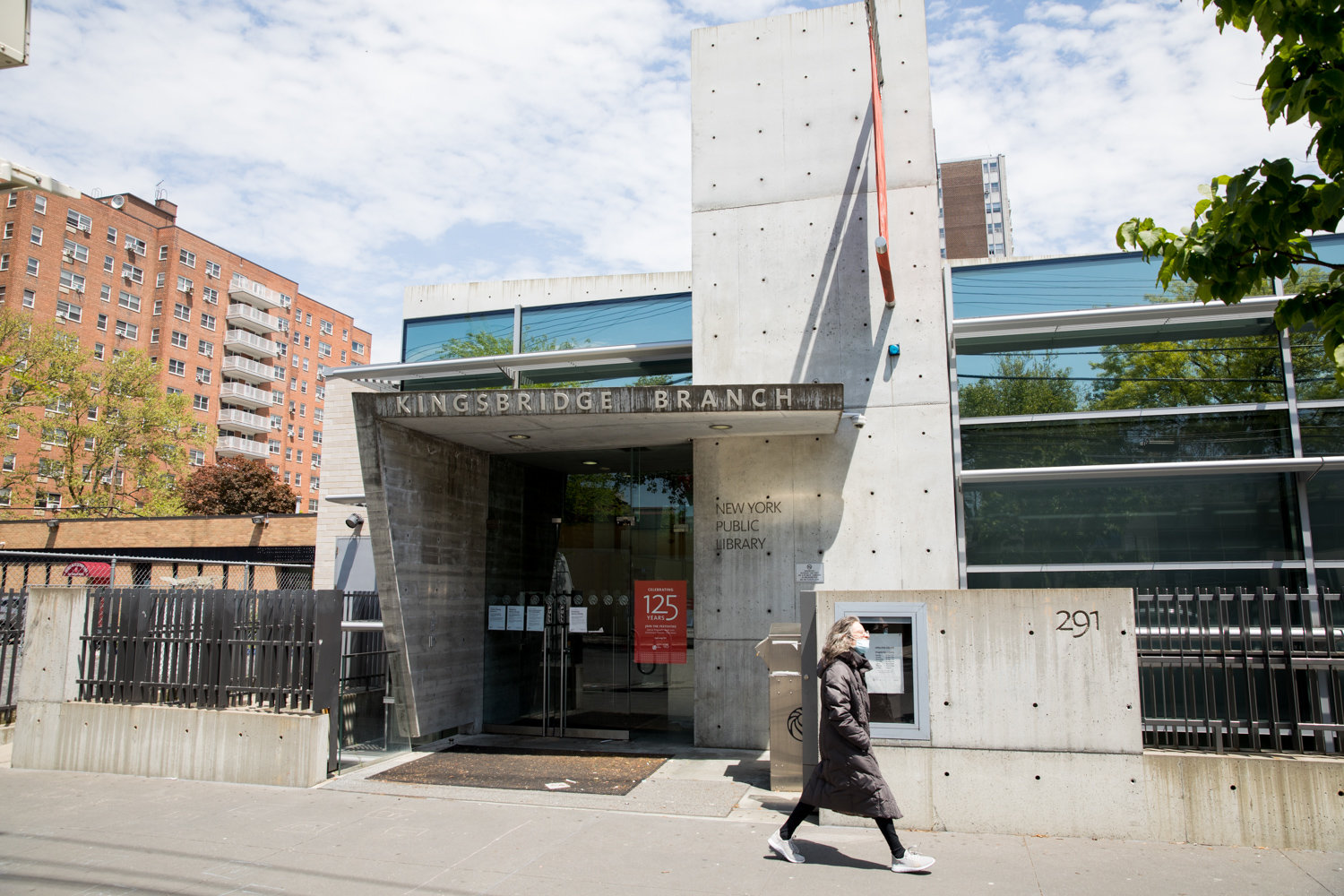 Many living in the Bronx — and the city — may not have access to ‘cooling stations’ like libraries this summer because of the coronavirus pandemic. With that in mind, Mayor Bill de Blasio says he will buy 74,000 air conditioners.
JULIUS CONSTANTINE MOTAL
Previous Next
By ANTHONY CAPOTE

Landlords are required to pump heat into apartments during the winter. But when it comes to summertime, tenants are generally on their own.

As temperatures rise outside, window and ceiling fans inside can’t keep up, literally turning some units into ovens that could put their occupants in the hospital — or worse.

Any other year, those looking to seek refuge from the heat could find so-called “cooling centers” around the city — senior centers, libraries, community centers and the like.

But then again, 2020 isn’t any other year. And for now, at least, many of those facilities are closed because of the coronavirus pandemic.

Luckily, Mayor Bill de Blasio has a plan he says will keep people cool this summer while still maintaining that necessary, safe social distance. He’s going to buy air conditioners. About $55 million worth, in fact, with primary attention on senior citizens.

“A lot of the things that we love about summer, those things are going to be different for the foreseeable future,” de Blasio said during his May 15 daily coronavirus briefing.

“There’s a lot of things that we would look forward to doing that we can’t yet do. But what we can guarantee is the heat is coming no matter what. And last year we saw some very sobering reality around the heat.”

Last July, for example, was one of the hottest in New York City’s recorded history, the mayor said. One day in July reached 100 degrees, according to published reports — which felt like 110, after factoring in humidity.

Seniors are particularly prone to overheating, the mayor said, which of course presents a unique dilemma for city officials trying to find a safe way to keep them cool and keep them safe from COVID-19.

The money will pay for 74,000 air conditioners, with part of the funds coming from the New York State Energy Research and Development Authority, which in turn received money from a federal grant. Roughly a third of the units will go directly to New York City Housing Authority residents, like those at Fort Independence and Marble Hill houses.

“Obviously, because of global warming, things are changing, and we’re seeing a kind of heat we haven’t seen before so much, and we take it seriously,” the mayor said. “So, we’ll identify those who need help the most. We’ll reach out to them, confirm that an air conditioner makes sense for them, and then we’ll begin installations.”

Those installations will begin this week. The city is pulling $35 million from its own capital funds, with NYCHA pitching in another $10 million, de Blasio said.

NYCHA will determine which of its residents need a free air conditioner, while others can apply through either the city’s human resources administration, as well as from other agencies, like aging and housing preservation.

State Sen. Gustavo Rivera is excited about the mayor’s plan, describing the A/C shopping spree as a way to unite neighbors.

He promised, for his part, to help make it possible at the state level.

“There is something we are doing around this and it has to do with the fact there are some regulations that need to change at the state level,” Rivera said, adding that some state regulations would have to be revised if lawmakers in Albany wanted to help make this plan a reality.

“A lot of folks talk about expenditures, but these are not expenditures,” Rivera added. “These are investments in the front end, which will save us so much more money in the back end. I am certainly going to work to make that happen.”

de Blasio isn’t stopping with air conditioners, however. The mayor also is petitioning the state’s Public Service Commission for an additional $72 million to cover summer utility bills for 45,000 working-class families. He wants state lawmakers to reallocate some funds from the Home Energy Assistance Program’s budget intended for winter heating in the city to help pay for even more utility bills.

“Summer utility bills go up in general,” de Blasio said. “This summer, they could go up a lot more because more and more people are staying home sheltering in place. So, we want to focus on people who are struggling to pay the bills, and we want to make sure they can stay safe and stay cool and have the air conditioning they need.”

The Home Energy Assistance Program providing heating for 1.4 million people across the state last year, according to a spokesperson for the state’s temporary and disability assistance office.

In a typical year, just 2 percent of the $370 million federal grant is spent on summer cooling, but the state agency has since made efforts to reallocate at least $6 million to help purchase air conditioners, and even extended the deadline to apply for HEAP assistance until June 30.

Cooling centers aren’t necessarily gone. de Blasio is still considering opening large public venues like sports arenas and auditoriums, where people can come in, and still find ways to maintain social distance. He also wants to provide ways to cool people off without packing them into enclosed areas with other people.

There is one part of the mayor’s plan that’s about as traditional New York City as one can get for staying cool during hot summer days: Opening up fire hydrants.

“There’s a way to do that that can provide cooling for a lot of people, a lot of kids in particular on their blocks, but can be done the right way. The safe way,” de Blasio said.

“The way that doesn’t undermine the work of the FDNY.”

In all, the mayor says he’s trying to keep people cool in the face of increasingly hot summers, while balancing that with a need to maintain social distancing guidelines.

The ultimate message from City Hall is clear, he says: Make it as safe as possible for those most likely to overheat to stay home and stay comfortable.