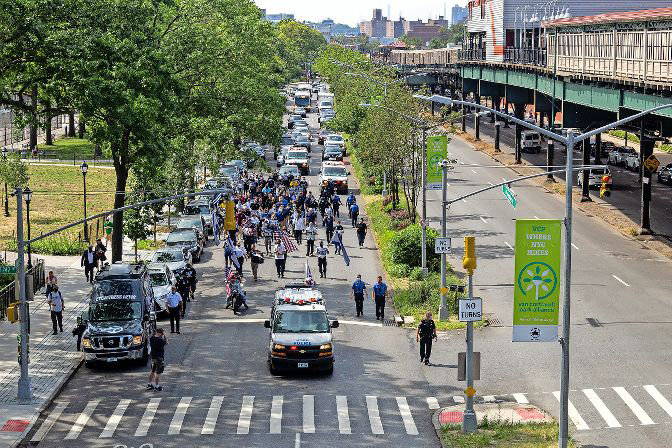 More than 200 law enforcement supporters march up Broadway from the 50th Precinct offices in Kingsbridge to Van Cortlandt Park last Friday in response to the Black Lives Movement. The march and rally was organized by former NYPD officer and former congressional candidate Sammy Ravelo.
NOAH BENUS 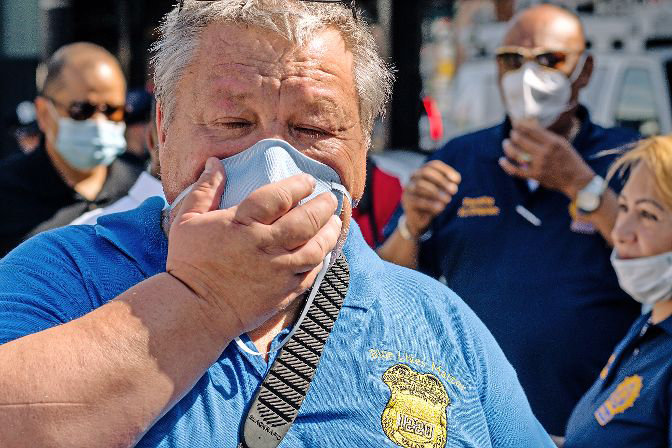 Gathering in the middle of a pandemic is not easy, but can be helped with masks, like this volunteer at an Aug. 21 rally to support law enforcement in response to the Black Lives Matter movement.
NOAH BENUS 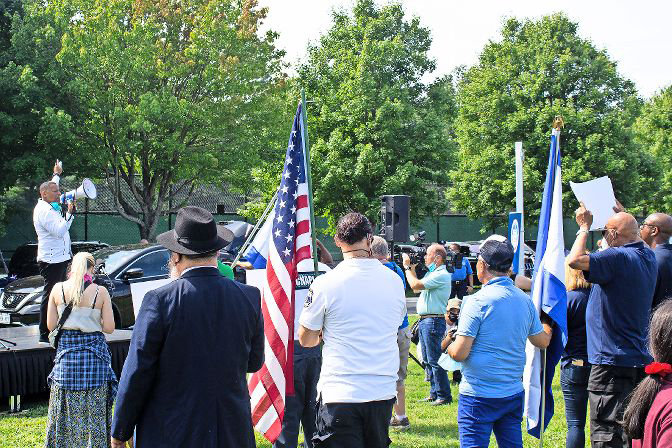 Sammy Ravelo, a former member of the New York Police Department — and a former primary challenger to U.S. Rep. Eliot Engel — speaks from a platform at Van Cortlandt Park on Friday in support of law enforcement and against new laws and procedures being put in place intended to provide more transparency with cops.
NOAH BENUS 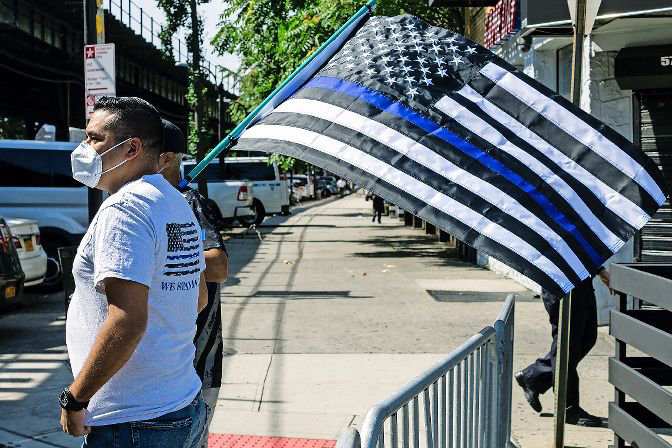 A popular modification to the American flag by law enforcement supporters is to remove all color from the flag, and add a blue line. That line is said to represent what police say is all that separates civilization from chaos, and that officers are that line. Others have described the line as a symbol of police protecting their own, even in the midst of wrongdoing.
NOAH BENUS 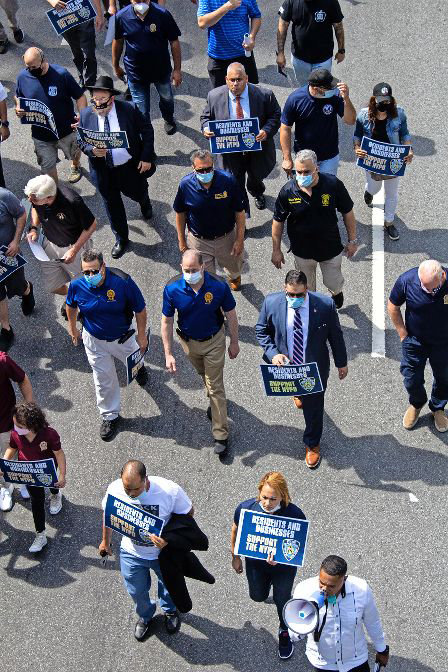 Former congressional candidate Sammy Ravelo, bottom right, leads some 200 people up Broadway through North Riverdale in support of law enforcement last Friday. Ravelo says the Blue Lives Matter movement is not intended to be political, but rally speakers were focused on attacking the Black Lives Movement, unofficially formed in the wake of reported police violence against people of color.
NOAH BENUS
Previous Next
By MICHAEL HINMAN

Nearly three months to the day George Floyd died during an arrest by Minneapolis police officers, protesters took to the streets again in the Midwest, this time in defense of Jacob Blake, a Black man witnesses say was shot multiple times in the back by a Kenosha, Wisconsin, police officer at point blank range.

As of Tuesday, Blake remained in stable condition — although there are concerns he could be permanently paralyzed — and the two officers involved in the shooting are on leave.

Just days before, however, there was a much different protest a lot closer to home. Led by former congressional primary candidate Sammy Ravelo, they chanted as they marched from the 50th Precinct headquarters on Kingsbridge Avenue, up Broadway and into Van Cortlandt Park, demanding attention be paid not to people like Floyd, Blake and even Breonna Taylor who died or were seriously injured at the hands of police in recent months, but to protecting the police officers themselves.

Ravelo, himself a former member of the New York Police Department, feels the role of law enforcement is often skewed in the media and by detractors, and that his Blue Lives Matter march — referencing the common color associated with police officers — was a perfect response to recent Black Lives Matter protests, including a recent one at the 50th Precinct.

“Obviously, the rise in violence that we’re seeing in the Bronx, and the lack of respect that has been shown to our officials and law enforcement officials — coupled with the fact that the silent majority are personally, what I see being a son of the Bronx — have led me to say, ‘You know what? Let’s put a rally together in the Bronx that says we support law enforcement officials,” Ravelo said. “We support unity. We support peace.”

Ravelo was joined at the march by dozens of law enforcement members — including some from the 5-0 — and members of two different unions, including the New York City Police Benevolent Association which broke its own tradition and backed a political candidate in the upcoming presidential election: Donald Trump.

Still, Ravelo insists his rally last week was not political, especially since he maintains his allegiance to a different kind of blue.

“I’m a lifelong Democrat,” Ravelo said, “but Democrats right now are perceived to be anti-police and law enforcement. As you can see, I’m not. So there’s nothing political about this.”

Who Ravelo chose to join him at the rally may not think the same thing. PBA president Patrick Lynch, who pushed for the Trump endorsement, was there, as was Ed Mullins, president of the Sergeants Benevolent Association. Joining them was Joseph Imperatrice, founder of Blue Lives Matter-NYC, as well as Pace University adjunct professor Darrin Porcher — both regular contributors to Fox News programming.

Two women even joined the group donning gear supporting Trump’s re-election bid. One of those women, Mary Muldoon, actually grew up on Kingsbridge Avenue, not far from where the 5-0 is now headquartered.

“I come from a family of retired cops,” Muldoon said. “This BLM movement affects my family big time.”

It’s tough for her to see police get treated poorly, especially from the very government she says is supposed to back them.

At Van Cortlandt Park, Porcher told the 200 or so people gathered there that New York was “under attack” by an “insurgence of an extreme left population, subsequently creating violence and chaos that’s causing public safety to go out of control.”

“I come under tremendous attack from the elements of the left,” Porcher said. “There’s no one that supports and defends the blue. There’s no one. There’s a very small contingent. However, we have few people are out here, and you can amplify that voice, that message, that we back the blue, and we are that silent majority.”

“To juxtapose ‘blue lives’ with ‘Black lives’ makes no sense,” Scarlott said, in a statement. “The NYPD must face reality. With a $6 billion annual budget, and more than 40,000 work force … and the NYPD waging unlawful, militarized and frankly fascistic campaigns against Black Lives Matter organizers and organizations in New York City, the wider public is finally waking up to the need to defund the police and invest in communities of color.”

Ravelo, however, told The Riverdale Press that these issues with bad cops aren’t happening in New York City, but in other parts of the country. And when it does happen here, the police department is successful in rooting those problems out. Efforts by the city council to take control only stop that from happening.

But do Black lives matter when it comes to talking about law enforcement? Rabbi Levi Shemtov of Chabad Lubavitch of Riverdale says God won’t let him discriminate.

And the rabbi says he’s willing to take it a step further by visiting Trump Tower on Fifth Avenue, where the city painted a “Black Lives Matter” mural last month, and do his own handiwork.

“I will go to Trump Tower with a gallon of blue paint, and you know what I would paint over there?” Shemtov asked. “Blue lives matter.”

When someone from the crowd shouted they’d already done that, Shemtov only had one thing to say to him: “Good for you.”