Bob Abrams believes politics can be force for good 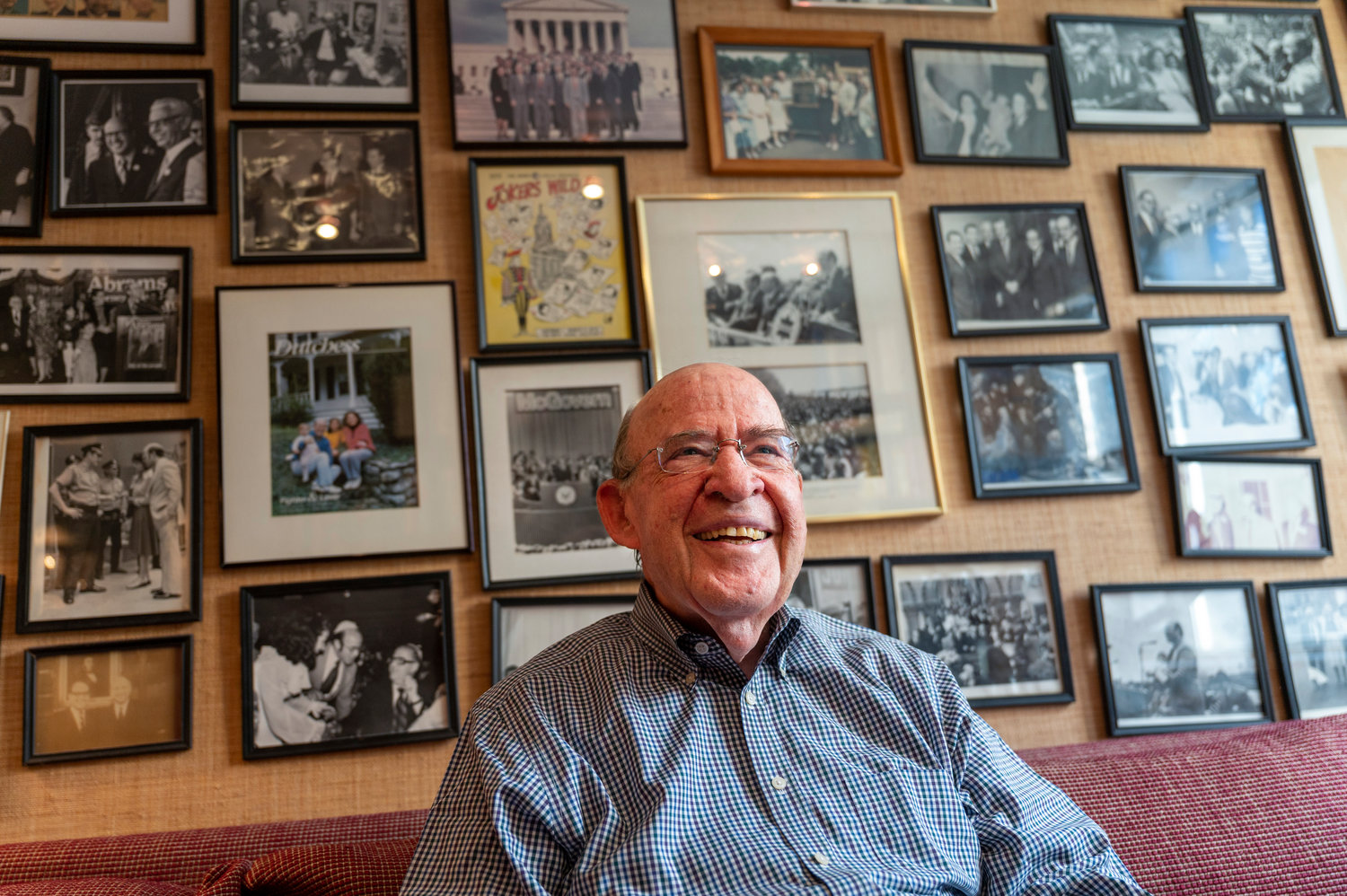 Former New York state attorney general Robert Abrams surrounds himself with many pictures of his life and career in his study. His memoir, ‘The Luckiest Guy in the World,’ shares Abrams’ long career in politics, focusing on his time as state attorney general. Abrams says he changed the nature of the office from simply defending the state government to instead advocating for people’s rights.
HIRAM ALEJANDRO DURÁN 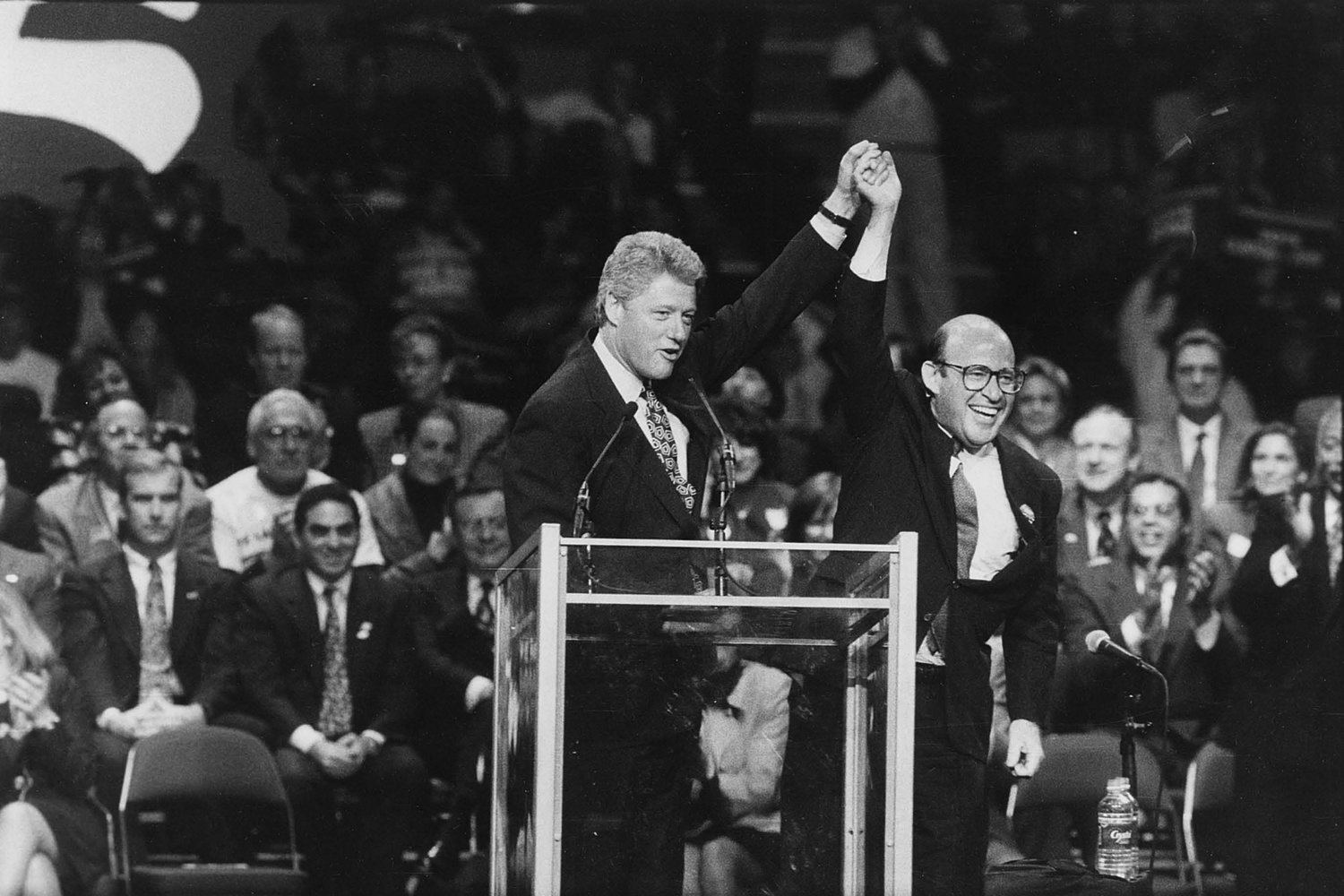 President Bill Clinton joined Robert Abrams on the campaign trail for the U.S. Senate seat he ultimately lost in 1992. In his memoir ‘The Luckiest Guy in the World,’ Abrams details this race, but also how he changed the state attorney general’s office, and other New York impacts.
Courtesy of Robert Abrams
Previous Next
By ETHAN STARK-MILLER

If Robert Abrams could impart one message to anyone, it would be that “ordinary people can prevail and succeed — even against powerful odds.”

“There’s a lot going on in our society that causes people to feel depressed, or to feel that they can’t beat the system,” Abrams said. “They can’t win. That corporate forces — governmental, bureaucratic forces — are too big to buck. You can win. If the public, if the people, if communities are allied with someone like an attorney general, they can produce very important, very significant victories.”

Abrams should know. He was a state attorney general himself. And an Assemblyman. And a Bronx borough president. But now he can add another title to that list: author.

His memoir, “The Luckiest Guy in the World: My Journey in Politics,” was released last March, and details Abrams’ 14 years as New York’s top prosecutor and the impact he had on the offices of state attorney general across the country. Abrams also recounts his upbringing in the Bronx, early career in politics, and time as a private sector attorney.

At first, “The Luckiest Guy” wasn’t even a book, Abrams said, but rather a series of transcribed recordings he made about his life with an oral historian to leave for his nine grandchildren.

“And after a while, those transcripts began to pile up and began to look like the possibility of a book,” Abrams, the 83-year-old Riverdale fixture, said. “That was the genesis of the book. It didn’t start out as writing a real book or a real memoir.  It was really an attempt to put something down on paper for my grandkids. And it wound up being this book.”

The memoir opens with Abrams’ upbringing in his Pelham Bay neighborhood. He talks about how his early years were shaped by the time he spent working behind the counter in his parents’ luncheonette, and his experiences attending local schools, like Allerton’s Christopher Columbus High School.

But, Abrams said, it was a government course during his undergraduate studies at Columbia College that got him interested in politics. Abrams’ professor gave his class an assignment to write a paper about each of their congressional districts, including an interview with their congressional representatives.

For Abrams, that was U.S. Rep. Charles Buckley, who also led the Bronx Democratic Party. What Abrams found disturbed him. Buckley had no district office, and no one from his Washington office would return his calls. Abrams couldn’t complete the assignment because he was never able to get through to his congressman.

A few years later, while he was in law school at New York University, Abrams got a call from one of the Bronx’s reform Democratic clubs, recruiting people to take on the party machine. At first, Abrams wasn’t interested. That is until the person on the other end of the line said they were taking on none other than Charles Buckley.

Abrams won his local Assembly seat in 1966, upsetting 17-year machine-backed incumbent John Satriale. After spending three years in Albany, Abrams came back home and won a race for Bronx borough president — an office he served in for most of the 1970s.

“That was a huge step up,” he said. “The Bronx had 12 different Assembly districts. Although I became very popular in my own Assembly district, I now had to go and travel throughout the Bronx from Riverdale to the South Bronx. From Co-op City to Tremont.”

During his years in borough hall, Abrams lived in three different Riverdale homes — on Rivercrest Road, Sycamore Avenue and West 246th Street. His administration also was integral in finally getting Seton Park built after years of languish.

“For years and years, it was just a promise,” Abrams said. “And like a lot of other capital projects in different parts of the Bronx, I was determined to convert that promise into reality.”

Then Abrams moved on to the biggest office of his career by becoming the first Democrat elected as state attorney general in 40 years when he took office in 1978. And Abrams had a clear mission.

“Attorney general historically was a backwater office,” Abrams said. “It was a 200-year-old office that people didn’t know very much about, that had an exclusive role of defending the state. But now there was a redefinition of the office, and expanding and broadening of the powers and authority of the office. To have the office not only be defensive, but to be offensive. To go and bring lawsuits to protect people in the public interest.”

To accomplish this mission, Abrams said, the first step was to build a non-partisan and professional office. So, he focused on hiring a highly qualified staff based on their merits as attorneys and commitment to his mission rather than their political affiliations.

During his time in office, Abrams said he lived up to his mission by bringing many lawsuits against big corporations protecting the rights of New York residents. Those included varied topics like consumer protection, milk-price fixing, and even antitrust cases. There also were large environmental lawsuits, like the Love Canal case, where his office compelled Occidental Chemical Corp., to spend millions of dollars to clean up the toxic waste site in a Niagara Falls neighborhood.

With Ronald Reagan came a large rollback in protecting people’s rights on the federal level, Abrams said. So, he formed coalitions with other state attorneys general around the country to protect civil rights and reproductive freedom, among other things.

Three decades later, in a time when American politics is more divided than ever, Abrams says he wants readers to take his life’s story as inspiration that politics can still be used as a force for good.

“People see politics today in a negative light,” Abrams said. “And I try to show through the course of my life and career that it could be as noble a venture as any that can be pursued. I view government and politics as a calling. A doctor, a clergyman, a teacher — they’re viewed as people with a calling. So those involved in politics can be viewed as individuals with a calling as well.

“And if you work at it very hard and do it with integrity and honesty, there could be nothing more exciting or meaningful or fulfilling.”