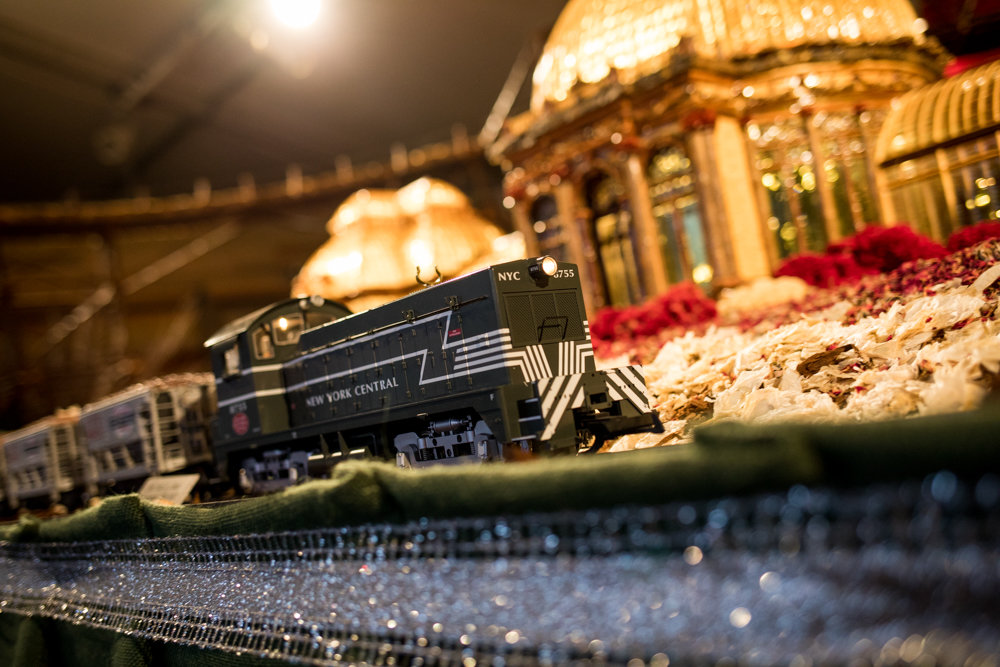 A model train passes in front of a replica of the Enid A. Haupt Conservatory at the New York Botanical Garden's Holiday Train Show, on display through Jan. 21.
JULIUS CONSTANTINE MOTAL 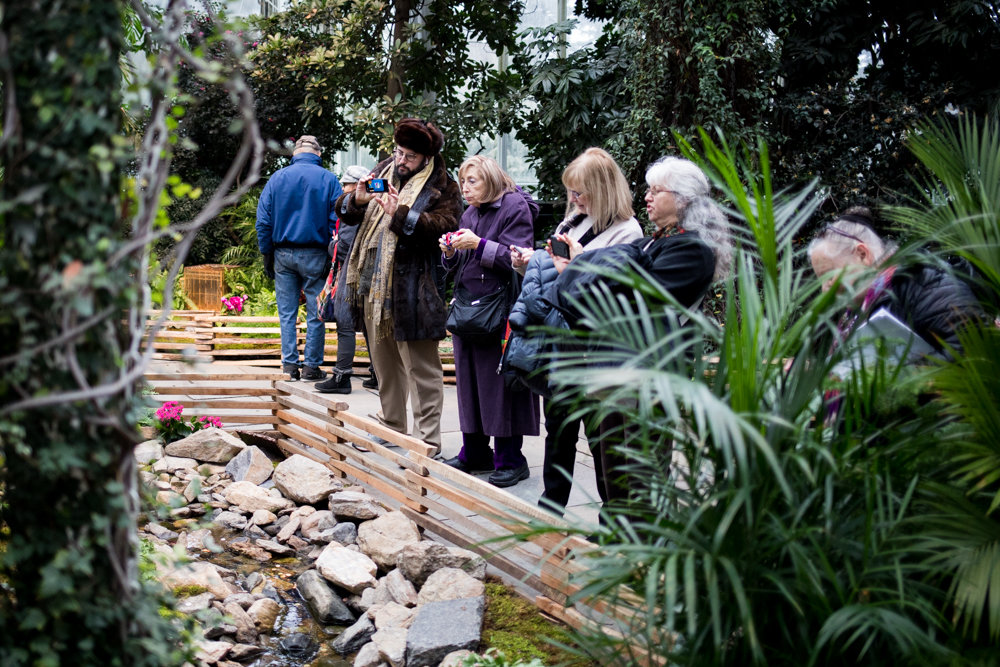 Visitors at the New York Botanical Garden take pictures of a display at the Holiday Train Show, which combines model trains and replicas of New York City architectural landmarks from the last few centuries. The show is on display through Jan. 21.
JULIUS CONSTANTINE MOTAL 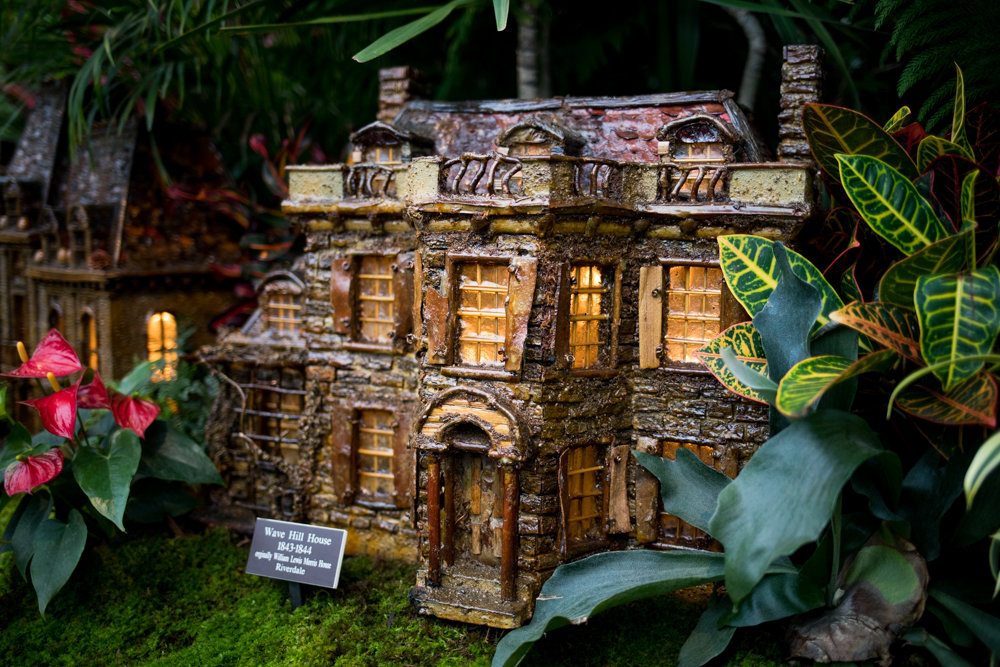 A replica of Wave Hill House is nestled among foliage in the Holiday Train Show at the New York Botanical Garden.
JULIUS CONSTANTINE MOTAL 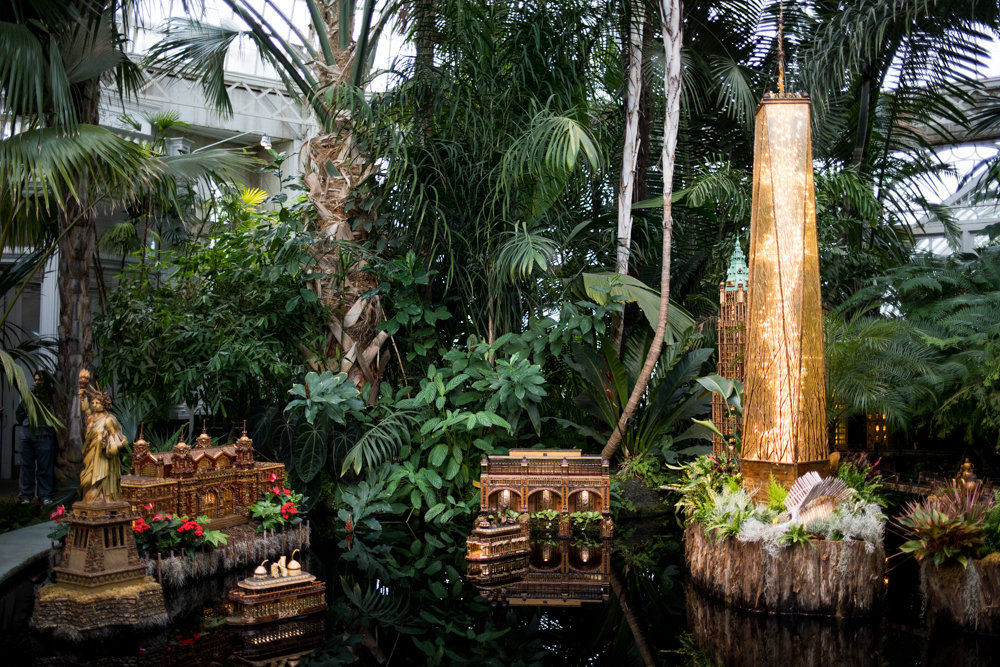 The final display of the New York Botanical Garden's Holiday Train Show pays tribute to lower Manhattan with replicas of One World Trade Center, the Statue of Liberty, and more.
JULIUS CONSTANTINE MOTAL 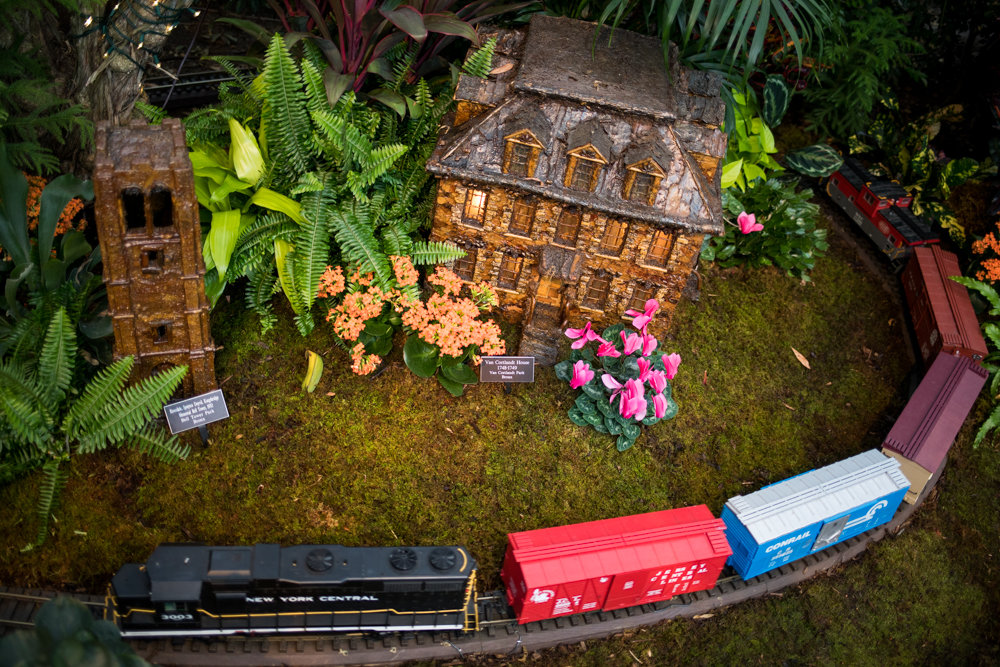 A model train passes in front of replicas of the Van Cortlandt House and the Riverdale Monument at the New York Botanical Garden's Holiday Train Show, on display through Jan. 21.
JULIUS CONSTANTINE MOTAL 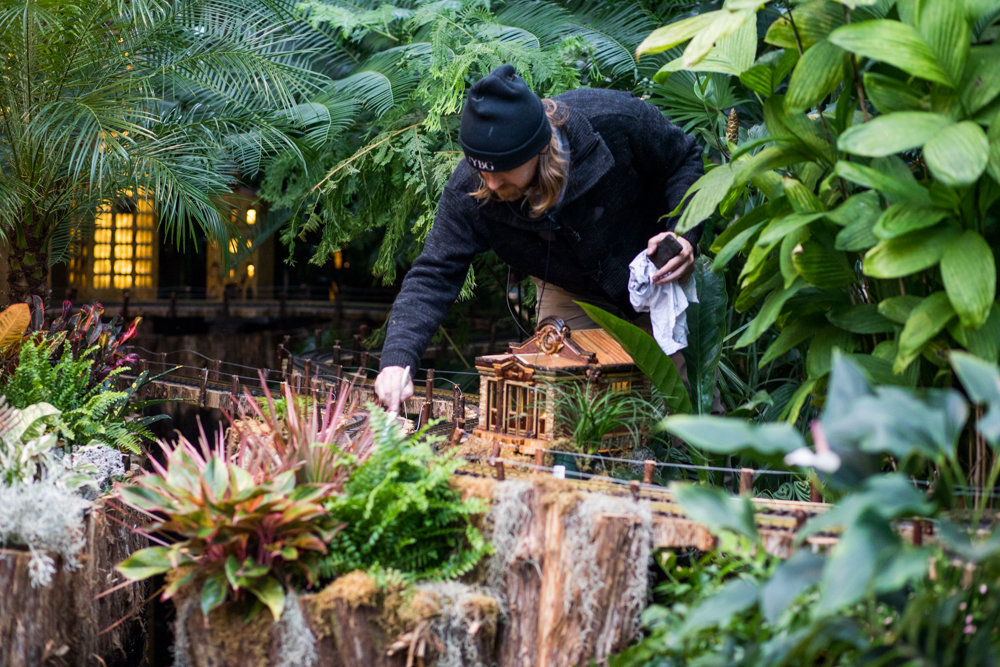 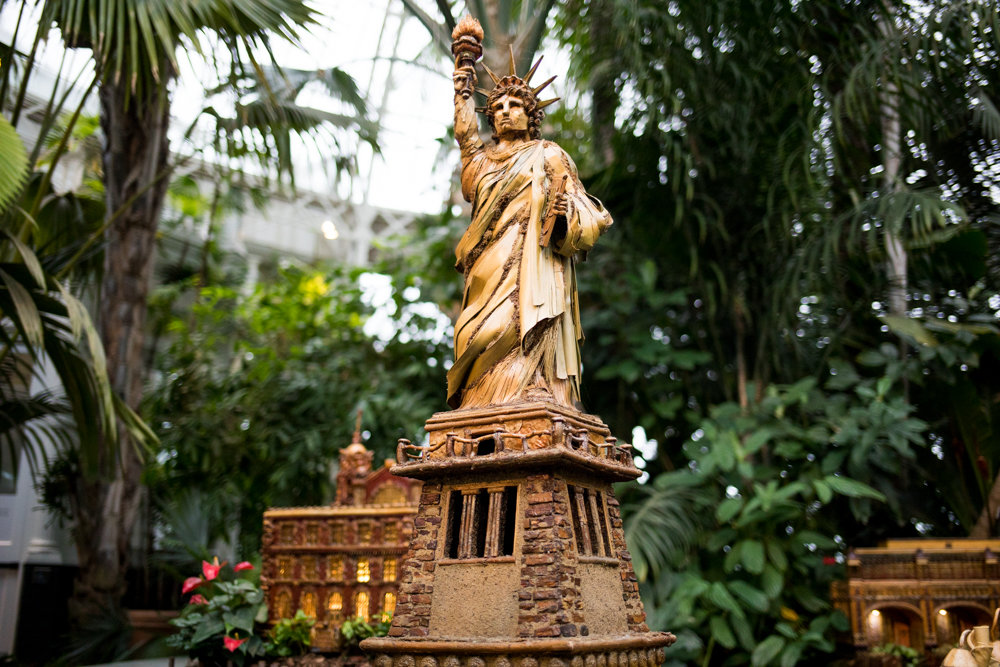 A replica of the Statue of Liberty stands tall in the final display at the New York Botanical Garden's Holiday Train Show, which pays tribute to lower Manhattan, and is on display through Jan. 21.
JULIUS CONSTANTINE MOTAL 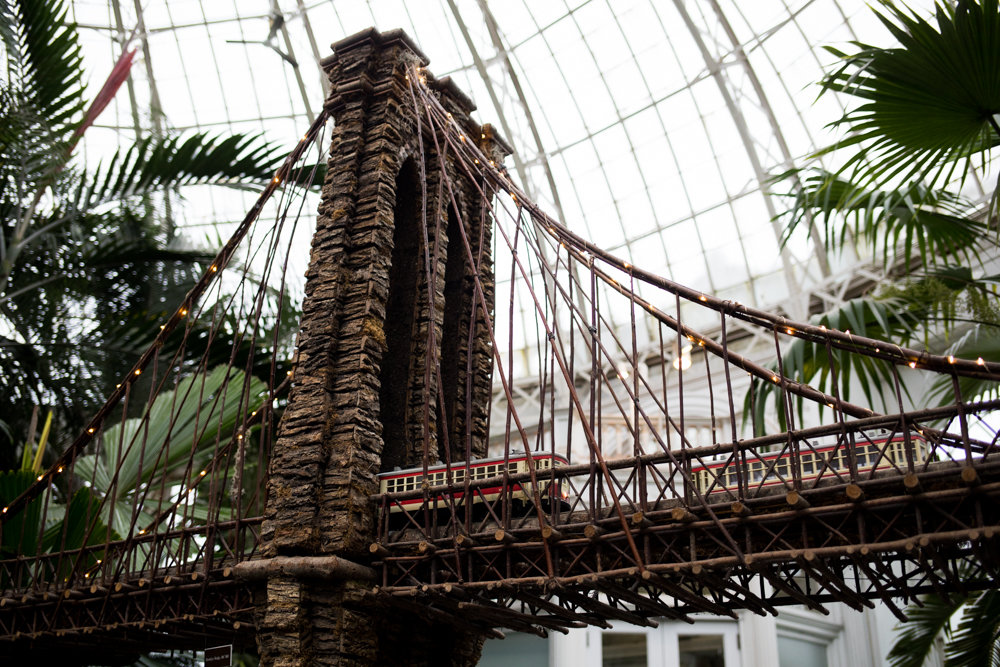 A model train rides along a replica of the Brooklyn Bridge in the New York Botanical Garden's Holiday Train Show, on display through Jan. 21.
JULIUS CONSTANTINE MOTAL 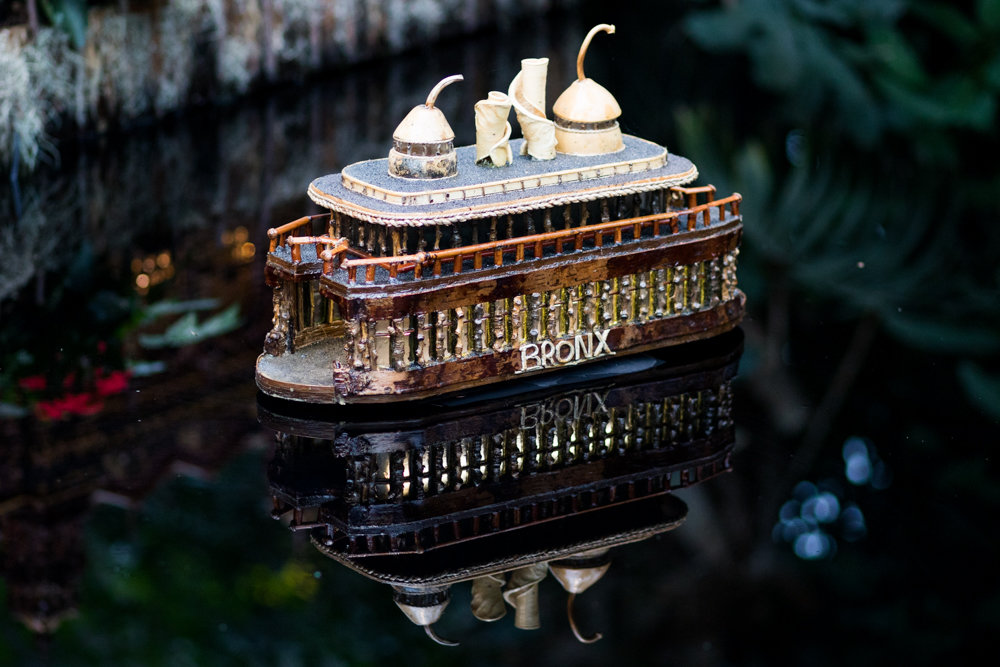 A replica of an early 20th century Bronx ferry floats on the water in the final display of the New York Botanical Garden's Holiday Train Show.
JULIUS CONSTANTINE MOTAL
Previous Next
If you go ...

COST: Prices range between $10 for children 2 through 12, and $23 for adults; free for children younger than 2, and members

Over the last 27 years, the garden’s Enid A. Haupt Conservatory transforms into a miniature model of New York and its landmarks. Model trains make their way through more than 175 of these landmarks — some of which include Riverdale staples like the Wave Hill House and the Riverdale Monument.

The existence of the Holiday Train Show is all thanks to Paul Busse, a visionary artist and trained landscape architect from Kentucky, who came up with the idea of displaying model trains in a conservatory setting. Every year, Busse and his team at Applied Imagination — a company he formed in 1991 where artists and botanical architects create projects like this — work with the garden’s staff to enhance the train show’s experience.

“They come up with ideas of what they want to build,” Victoria Lewis, manager of interpretive content through NYBG’s exhibitions department, said. “We also will have specific requests, but it’s a collaborative partnership to decide what changes we want to make each year.”

Plans for the 2019 train show are already underway, Lewis added, since Applied Imagination and the botanical garden spend at least a year prepping for each holiday exhibition. During this yearly planning phase, the two groups brainstorm what new landmarks or designs they’d like to create and what will take center stage in the conservatory’s Palms of the World Gallery as part of the show’s finale.

This year, they chose to feature lower Manhattan in their Reflecting Pool to mimic New York Harbor with replicas of One World Trade Center and the Statue of Liberty.

“When you enter, it’s like you’re riding on a ferry or something and looking up at lower Manhattan looming in front of you,” Lewis said.

The One World Trade Center replica is the largest building Applied Imagination has ever made, according to Lewis. And they put their natural spin on it.

“Instead of just interpreting it literally, which would just be like a glass box because it’s a glass skyscraper,” Lewis said, “they went for this surface decoration using birch branches to create this design of branches growing upwards as a symbol of the regrowth and the generation and resilience of lower Manhattan in the last couple of decades.”

While many train enthusiasts come for the locomotives, they also stay for the nature. And in Lewis’ eyes, the train show couldn’t exist without nature.

“For me, the most beautiful thing about the train show is the use of plants and ingenuity and beauty of using natural objects to model manmade art,” she said. “It really brings into focus that the motifs in art and architecture are drawn from nature, and those forms mirror natural forms and patterns.”

Lewis and a few of the garden’s staff members had a chance to go to Kentucky for three days this year to film and observe the Applied Imagination creators at work. One thing that stood out to Lewis was how sustainable the group is in working with different plants.

“They will try to use all the different parts of each plant that they use,” Lewis said. “They forage from around the forests in Kentucky and they’ll use the tiny little stems no one would even think about. They save everything because they’ll know what they’ll want to use it for.”

That alone is impressive to Lewis.

“I’m really just in awe of the imagination of a person who can look at a tiny little seed and think, ‘This is what I’ll use for the marquee on the Apollo Theater,’” she said.

This is Lewis’ fourth year working on the train show, and she’s grown to truly love the experience.

“I was skeptical at first when I started here,” she said.

“I had never seen the train show, and it sounded like something for kids. But then I saw it and my jaw just dropped. It’s stunning to go in — especially at night when the lights are sparkling. It’s like you’re in wonderland or something.”

Lewis visits the show frequently to check that everything is running smoothly, and is often surprised at how she notices different things in some of the buildings each time.

“It makes me look more closely at the buildings that do exist that I see every day and we walk past as commuters and don’t really think about,” Lewis said.

As the Holiday Train Show continues to attract people from all over the country and the world through Jan. 21, there’s one thing Lewis wants each of them to take home.

“I hope that when they leave the show, (they) are able to pause in their daily lives and look more closely and appreciate the beauty in the everyday,” she said.