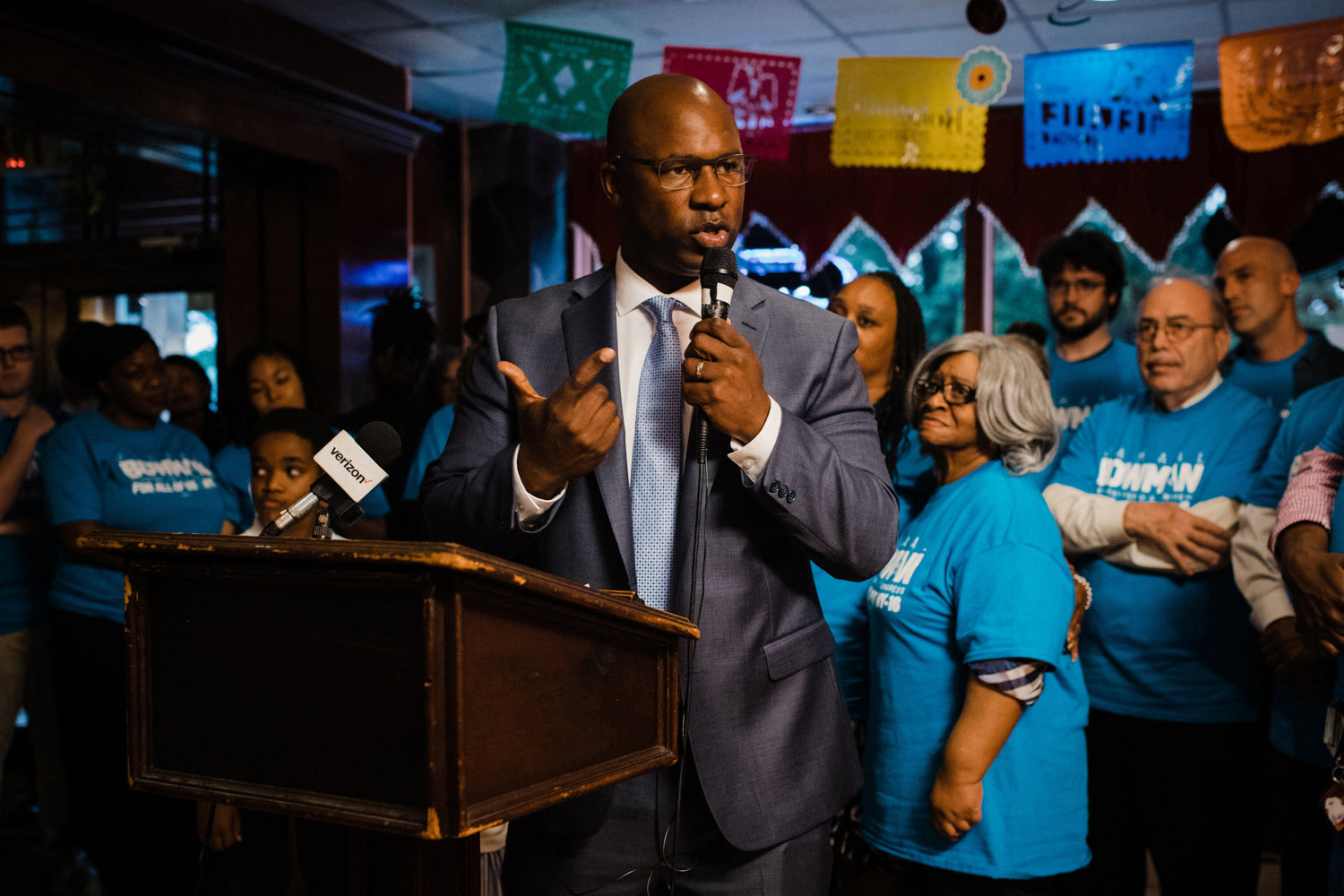 U.S. Rep. Jamaal Bowman is not exactly a happy congressman despite the passage of the Democratic-led infrastructure bill through a divided U.S. Senate. In fact, Bowman says he and other progressives may not support Joe Biden’s signature bill in the House if the Senate fails to move a budget resolution worth three times as much.
File photo courtesy of Corey Torpie
By ETHAN STARK-MILLER

Gov. Andrew Cuomo’s resignation over nearly a dozen sexual harassment allegations dominated the news cycle in New York last week. So, it may have been easy to miss the other big story that broke the same day — the U.S. Senate finally passing an infrastructure bill, bringing it yet another step closer to landing on President Joe Biden’s desk.

The $1 trillion package — called the Infrastructure Investment and Jobs Act — was passed by a bipartisan coalition of senators in a 69-30 vote. This deal, if signed into law, would fulfill a key piece of Biden’s legislative agenda — an infrastructure plan that had been repeatedly promised by his predecessor, Donald Trump, but never fulfilled.

The sweeping package includes funding to repair roads and bridges throughout the country, as well as expanding and updating public transportation, building an electric vehicle charging network, and even expanding broadband internet access — especially to lower-income and rural areas.

The package also provides money for climate change resiliency and modernizing the electric grid by establishing the Grid Deployment Authority, which would oversee the financing and development of high-voltage power lines.

Yet, not everyone in Congress — even inside Biden’s own party — is pleased with this bill. Mainly because the earlier, more progressive, version of the bill was stripped down in order to bring Senate Republicans on board.

“The bipartisan bill does not address these crises,” Bowman said. “Not even close. Though it includes important investments in hard infrastructure like our roads and bridges, it vastly underfunds public transit, electric vehicle and grid infrastructure, and lead pipe replacement.”

Additionally, Bowman said, some key provisions with more local effect — including more than $17 million of federal funds — were removed. He’s ready to fight to restore that funding into the House version of the package when Speaker Nancy Pelosi gets this deal onto the lower chamber floor.

“This is personal to my district, where public transit underserves Black and brown neighborhoods, and where fossil fuel infrastructure like the Cross Bronx Expressway cuts through communities and lowers quality of life,” Bowman said, adding all of that leads to higher asthma rates among children.

When Pelosi will introduce the package into the House is still unclear, but it likely won’t be until the fall, according to published reports.

Bowman has some hope federal dollars will find their way to some of his key projects through the Democrats’ $3.5 trillion budget proposal, which is the next big agenda item for the Senate. If that passes, it would fund many of the areas the infrastructure bill doesn’t — like universal child care and repairing dilapidated public schools around the country.

Yet, no one is expecting bipartisan support there. Democrats, according to reports, plan to push this measure past the Senate filibuster rules through budget reconciliation, which requires just 51 votes. Democrats control 50 votes, and have the tiebreaker through Vice President Kamala Harris.

Getting all the Democrats to vote yes, however, could be tricky. And Bowman has reportedly joined other progressive congressional members signaling to Pelosi they won’t vote for Biden’s infrastructure bill until the Senate passes the budget resolution. Making matters more complicated, Arizona Sen. Kyrsten Sinema came out against the budget resolution last month, jeopardizing its passage.

But more locally, some advocates see the federal legislation as a step in the right direction. Danny Pearlstein, a spokesman for transit advocacy group Riders Alliance, says this bill will go some distance in helping the Metropolitan Transportation Authority address its massive capital needs.

“Our demand was for $20 billion in capital funding, and this bill gives us roughly half that,” Pearlstein said. “$10 billion is a piece of that, but the whole capital program for these five years is $51 billion. The biggest chunk of that is congestion pricing, which is massively delayed. And another big chunk of that is supposed to be new debt.

“But because the MTA took on so much unanticipated debt during the pandemic — and has so much less revenue because ridership is down — they really can’t afford $10 billion in new debt.”

Still, this money would go toward capital projects like updating the century-old transit network’s decaying signal system, Pearlstein said. It also could be used to install elevators and ramps in stations throughout the subway system that are right now practically inaccessible to commuters with disabilities.

Another issue, Pearlstein said, is that the MTA is looking at a massive hole in its operating budget two years from now of several billion dollars. That’s because federal aid from Biden’s American Rescue Plan will have dried up by then. The operating budget pays for all the day-to-day costs of the transit system’s service.

In order to address this issue, Pearlstein said, the upcoming federal budget resolution should include a large investment to cover the MTA’s ongoing operating needs past 2023.

“The budget is characterized as human infrastructure, child care, home care, other investments that enable people to go to work and create jobs,” Pearlstein said. “And transit fits exactly into that model. Because if you can’t get to work, you can’t work.

“Transit workers get laid off because the system’s run out of money. They lose their jobs. So transit funding on the operating side is all about job creation and job maintenance.”

Putting more money toward the MTA’s operating needs, Pearlstein added, could increase bus service in the Bronx and help solve one of the borough’s biggest transit issues — traveling between the eastern to western sides of the borough.

“There is a real opportunity to improve east-west connectivity in the Bronx this year if Congress puts money for transit operations in the federal budget,” Pearlstein said.

From an environmental perspective, Fieldston activist Jessica Haller sees the infrastructure bill as a positive. While no single piece of legislation can unilaterally solve the climate crisis, she said, it gets the ball rolling on addressing the issue in a way that hasn’t been done before.

With all these positives in the infrastructure package, Haller says she’d be very disappointed if Bowman and other progressives voted against it.

“You could push inside for more money, more funding, more equitable measurement, all the ‘mores’ that we want,” she said. “But I don’t see this ultimately as a moment to vote against it, because we got to get out of our own way, and just start doing the work.”