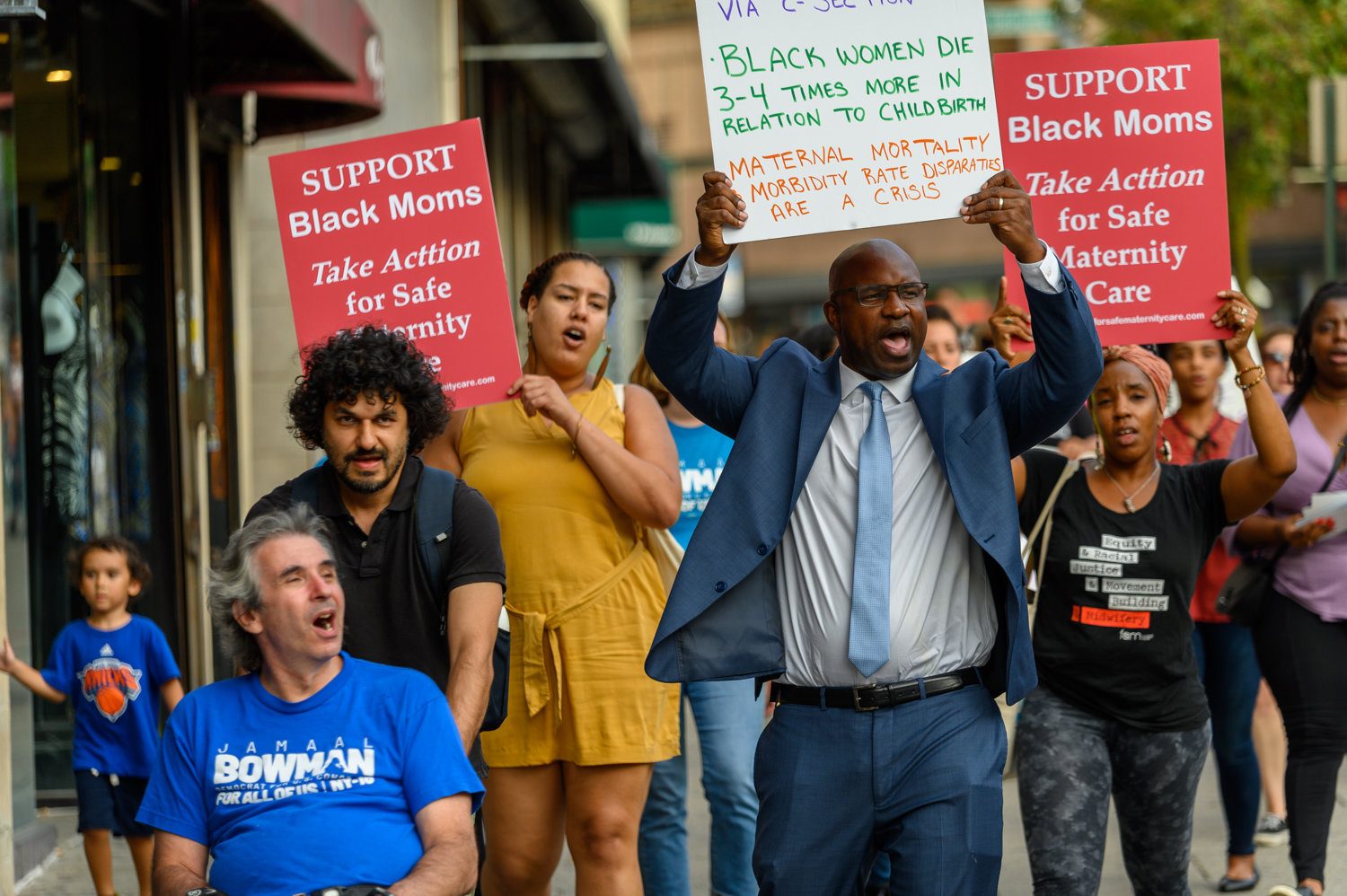 Jamaal Bowman, center right, participates in a march last September as part of his campaign to unseat U.S. Rep. Eliot Engel in the upcoming Democratic primary. Of all of Engel’s challengers, Bowman has raised the most money.
Courtesy of Jamaal Bowman 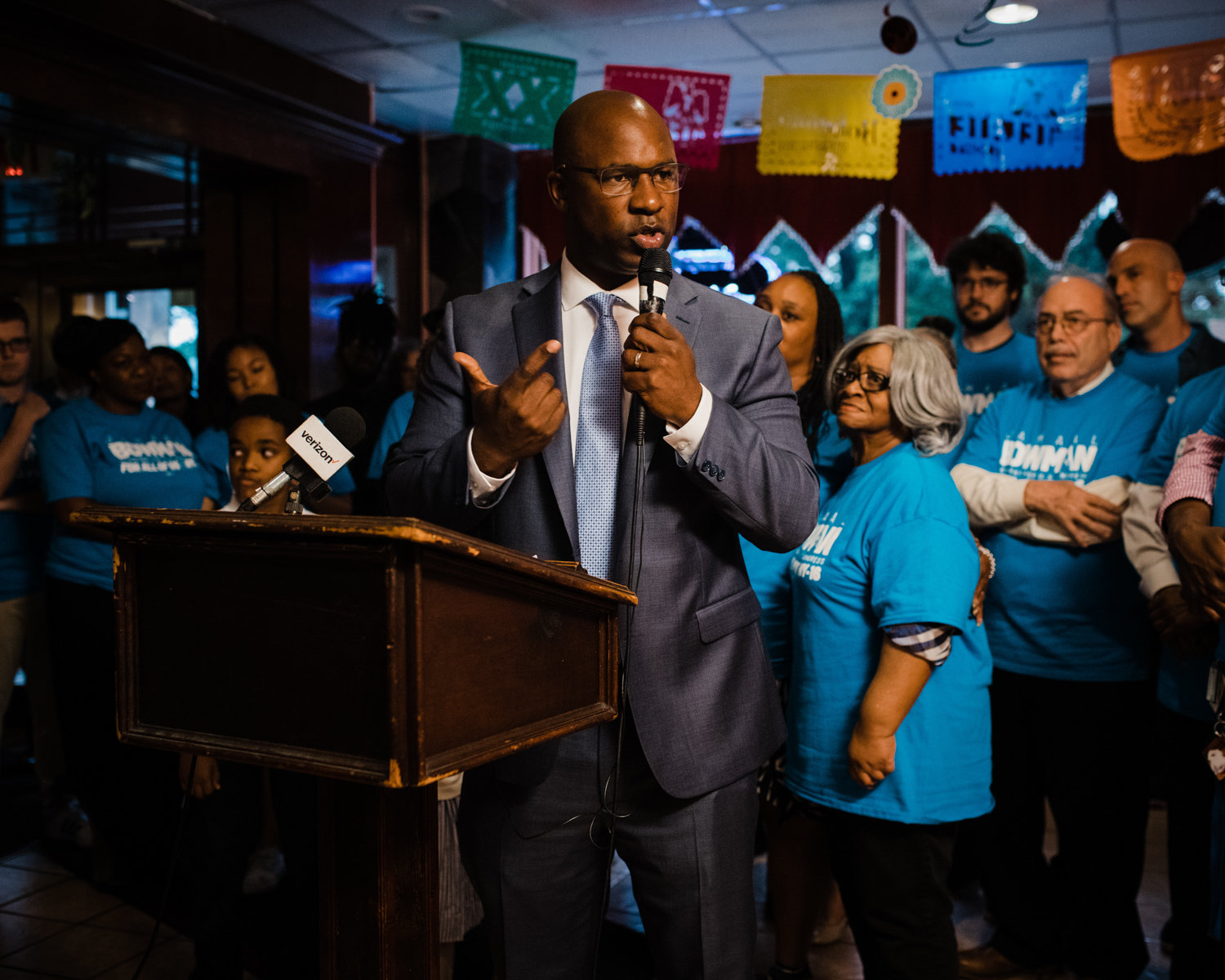 In the time since Jamaal Bowman launched his campaign last year, he has picked up a bevy of key endorsements in his bid to unseat 30-year incumbent, U.S. Rep. Eliot Engel.
Courtesy of Corey Torpie 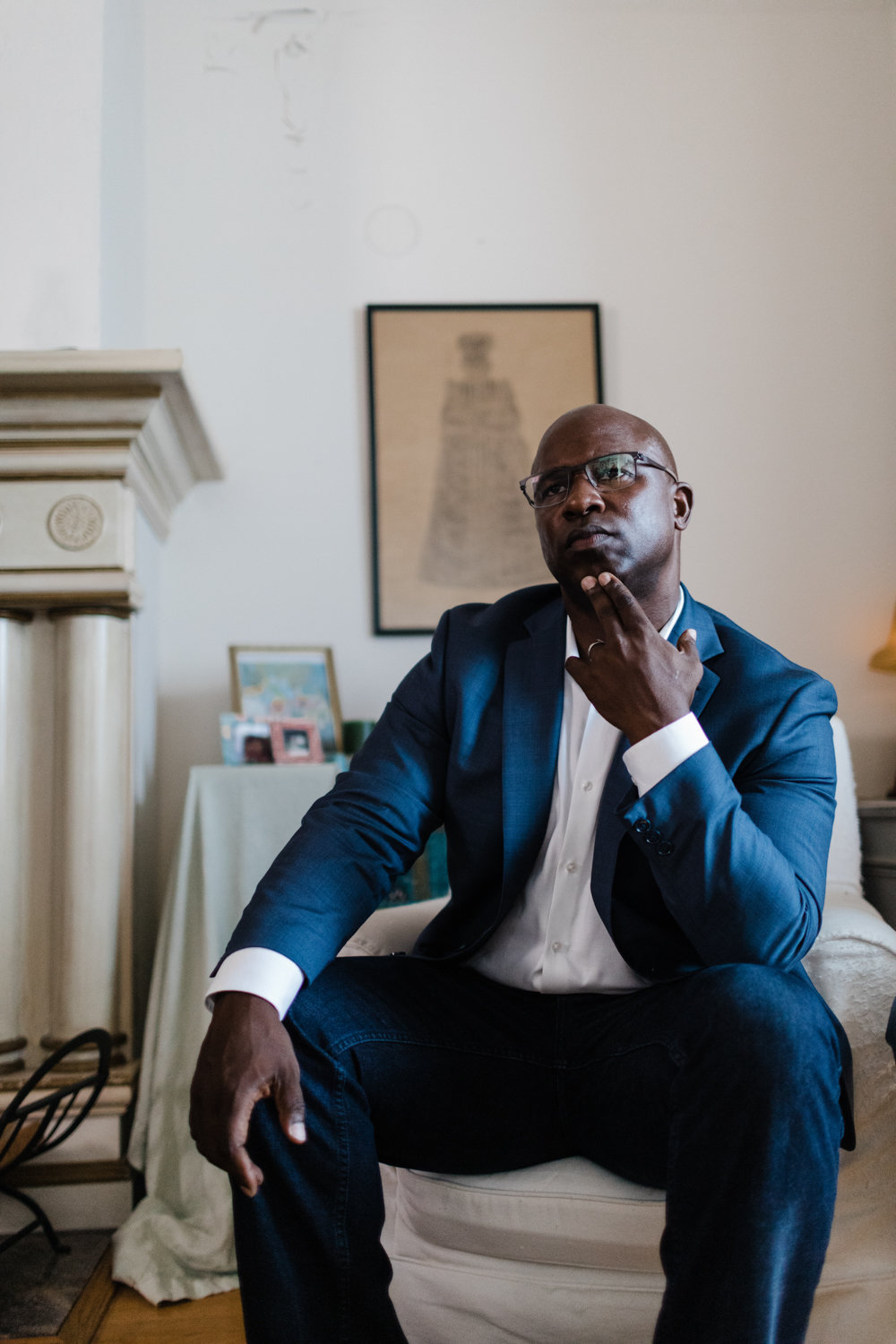 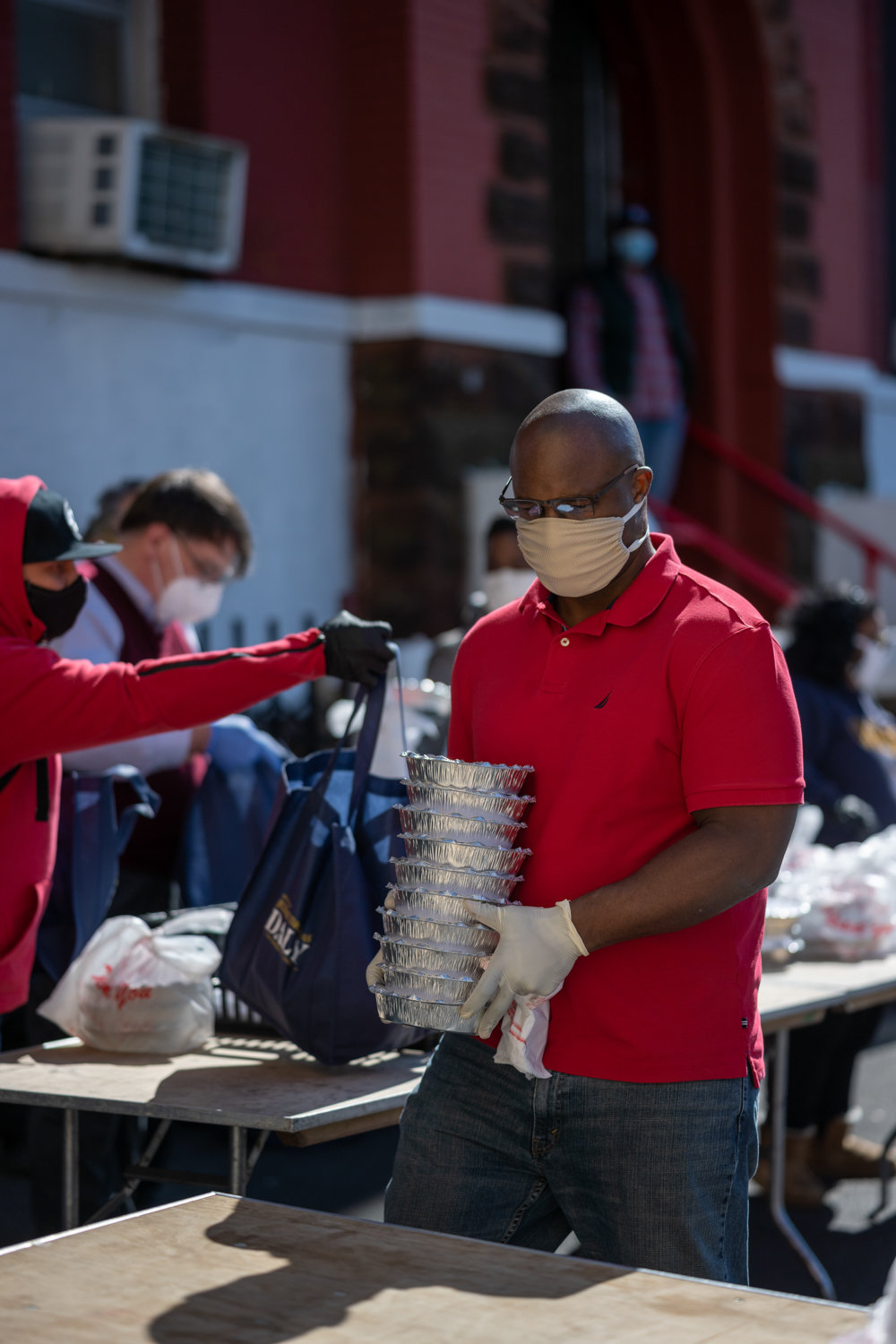 Congressional candidate Jamaal Bowman has the strongest chance to unseat U.S. Rep. Eliot Engel in the upcoming Democratic primary, according to many observers, based on his publicity and his campaign war chest of more than $1 million.
Courtesy of Jamaal Bowman
Previous Next
DECISION 2020: Jamaal Bowman

PRIMARY ISSUE: ‘Being present and engaged to fight for equality throughout the entire district.’

While Bowman has picked up several notable endorsements recently — including from former opponent Andom Ghebreghiorgis, U.S. Rep. Alexandria Ocasio-Cortez, and the city’s first public advocate, Mark Green — Biaggi’s support came as a surprise as she had previously endorsed Engel, who was first elected to Congress in 1988, defeating her grandfather, then-U.S. Rep. Mario Biaggi, in the Democratic primary.

“I have to acknowledge something,” Biaggi said during a news conference that Friday in front of the closed Spuyten Duyvil Library. “At the end of 2019, I stood in this community, and I said, ‘It’s not the time to be endorsing Democrats who are running against incumbents.’”

“The world has changed, like, 180, practically overnight,” Biaggi later told The Riverdale Press. “We would be remiss not to have leadership of the future to represent this district.”

Biaggi’s decision came just days after Engel was caught on a hot mic while touring areas plagued by violence and property damage on Fordham Road. It was on that mic, before a rather impromptu news conference, Engel reportedly asked Bronx borough president Ruben Diaz Jr., to speak, even insisting when Diaz said no, saying, “If I didn’t have a primary, I wouldn’t care.”

Biaggi didn’t cite that as the only reason she made her decision, but she did try to reach the congressman ahead of making a public announcement, to no avail. She had originally cross-endorsed Engel as well as Assemblyman Jeffrey Dinowitz for the June 23 Democratic primary.

Working as a teacher and a principal for 20 years, Jamaal Bowman has met a lot of students and families — and he’s met the challenges those families face.

“We can’t look at education in isolation,” Bowman said. “It isn’t just about an individual child or an individual kid doing the best they can in school. But that one child has a lot of contexts that come with them in a school setting. They have a family. They live within a community. And if that community has been deprived of resources and neglected for decades, that’s going to impact how the family functions.”

Those resources can include a lack of stable housing or access to regular meals, and even access to health insurance and care. Bowman thinks schools should be able to work alongside health care providers, community organizations and elected officials to ensure students and families are getting their needs met outside of school, giving them a fighting chance.

How would all that happen? Funding, to start.

“Public schools across the state have been underfunded for decades,” Bowman said. “Right now I believe New York state schools are owed over $4 billion by the state. So we call for a quadrupling of funding for Title 1 schools at a federal level. We call for fully funding (Individuals with Disabilities Education Act), which is the law that provides resources for our students with special needs.”

Something else he values inside public schools is mental health support. He had students in the South Bronx who came in days after they had family members shot and killed over the weekend, and one parent association mom whose son was killed the same way.

Violent memories aren’t just a result of outside sources, Bowman said. Suicide and self-harm are serious concerns not only for schools in the Bronx, but in Westchester County as well.

“This trauma, and this secondary trauma that educators deal with, it happens on a regular basis,” Bowman said. “And it’s something that needs to be addressed within our schools through mental health support. But, again, it’s not just schools by themselves. It has to be a community effort.”

The systems needed to provide that support just don’t exist.

“We have 40,000 people who are severely rent-burdened in this district, which means they pay more than 50 percent of their salary toward rent,” Bowman said. “And we have four NYCHA developments in the district that have been disinvested and neglected by the federal government for 30 years and haven’t received a dime over the last 10 years.”

Bowman is backing former vice president Joe Biden in the presidential race, but he does support a platform idea from former presidential candidate Elizabeth Warren to invest $500 billion over 10 years to build new public housing and retrofit existing public housing to comply with green ideals, including those that are part of the New York City Housing Authority.

Increasing land trusts — where people have part ownership over their apartments — also is critical, Bowman said, especially in areas where policies like redlining have historically kept black people from owning homes.

Those policies also created high rates of asthma in some parts of the Bronx as people live with poor air and housing conditions. Moving between schools, Bowman said, asthma was the “norm,” but a norm that can have serious repercussions. A former student had a severe asthma attack in her home, but by the time ambulances arrived, she already had been unconscious for several minutes, losing oxygen to her brain and causing permanent damage.

“This is from an asthma attack of a girl who’s lived in the Bronx,” Bowman said, “where you are three times more likely to die of asthma to anywhere else in the country.”

Those conditions also contributed to the highest rates of coronavirus infections in the state as people dealt with existing health issues and poor health care infrastructure.

So, why run for the U.S. House of Representatives, rather than a position in state or city government?

“I’ve worked with state and local officials throughout the city on a variety of issues, you know, culturally responsive education, trauma-informed education, really pushing the envelope in these areas, education funding,” Bowman said. “And I consistently heard that their hands were tied because of federal policy. The lever is moved by federal policy.”

Of course, taking up the mantle federally means balancing the needs of the country and the needs of the district an elected official represents. Bowman said the 16th Congressional District could serve as a microcosm of issues all across the country.

“The fact that we have three Americans who own more wealth than the bottom 50 percent of this country, that’s an issue,” Bowman said. “And it’s an issue that has manifested itself in this district. We have some of the most expensive real estate in the country, and the highest number of WIC recipients in any congressional district in the country.”

Ultimately, many federal issues have manifested in the district, he said — even foreign policy, as directed by climate change standards present in the city.