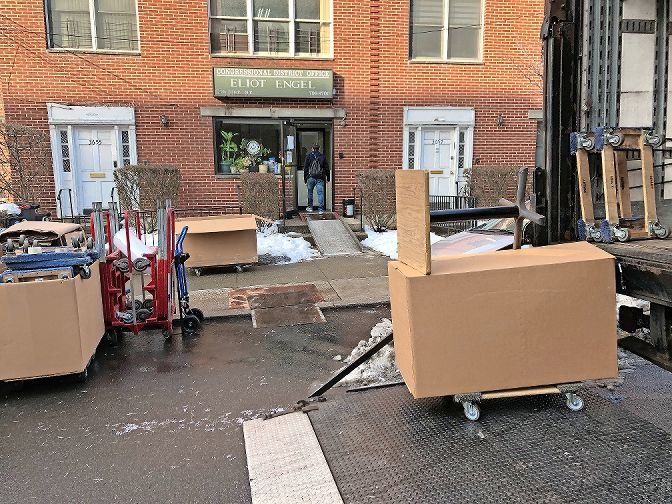 Moving trucks were outside U.S. Rep. Eliot Engel's district office on Johnson Avenue this past Tuesday, clearing out as 2020 comes to a close. His successor, Congressman-elect Jamaal Bowman, is set to be sworn into Engel's old seat on Jan. 3.
Courtesy of Fred Smith
By MICHAEL HINMAN

Jamaal Bowman is set to be sworn in as the 16th Congressional District’s next representative in just a couple weeks. But he’s still being asked about an exchange that happened right here in the pages of The Riverdale Press last summer.

Bowman joined Shalom Hartman Institute of North America president Yehuda Kurtzer on a podcast he produces with the Jewish Telegraphic Agency, talking about what the transition will be like from U.S. Rep. Eliot Engel to Bowman — especially for the Jewish population.

Yet Kurtzer — who told the congressman-elect he lives inside his district — was curios to how Bowman felt about his very public exchange with Hebrew Institute of Riverdale rabbi Avi Weiss.

The rabbi had questioned Bowman’s support for Israel, especially in light of his backing of congressional members like Alexandria Ocasio-Cortez, who Weiss says doesn’t defend Zionism the same way Engel did.

Bowman told Kurtzer he welcomed the rabbi’s letter, allowing him to publicly respond to “a part of the community that  ... didn’t have a chance to meet me in person, or engage with me beyond a quote they read somewhere.”

“What I wanted to convey was empathy and compassion, and an understanding of the plight and the fears of the Jewish community, being a Black man in America,” Bowman said. “I mean, that’s something that I felt throughout my entire life, like an existential threat from the establishment, from the system, from others — simply because of who you are.”

Bowman also said it was important to talk about the Palestinian community as well, in a way to “draw parallels and connections between our three communities in a way that can continue a conversation that gets us to a place of peace and justice for all people regardless of background,” the congressman-elect said, “because I truly believe that that’s where we can go.”

Still, there’s a long journey ahead when it comes to building that mosaic.

“We just have to figure out how we can get there despite a hard history,” Bowman said. “I’m a Black man in America. I can’t ignore or disown or seek to harm white people on my path to justice and freedom and equality. We have to live together and work together, and figure out what that looks like.”