Bowman to White House on Build Back Better: We told you so?

'It's not about vindication, it's about passing the president's full agenda,' congressman says 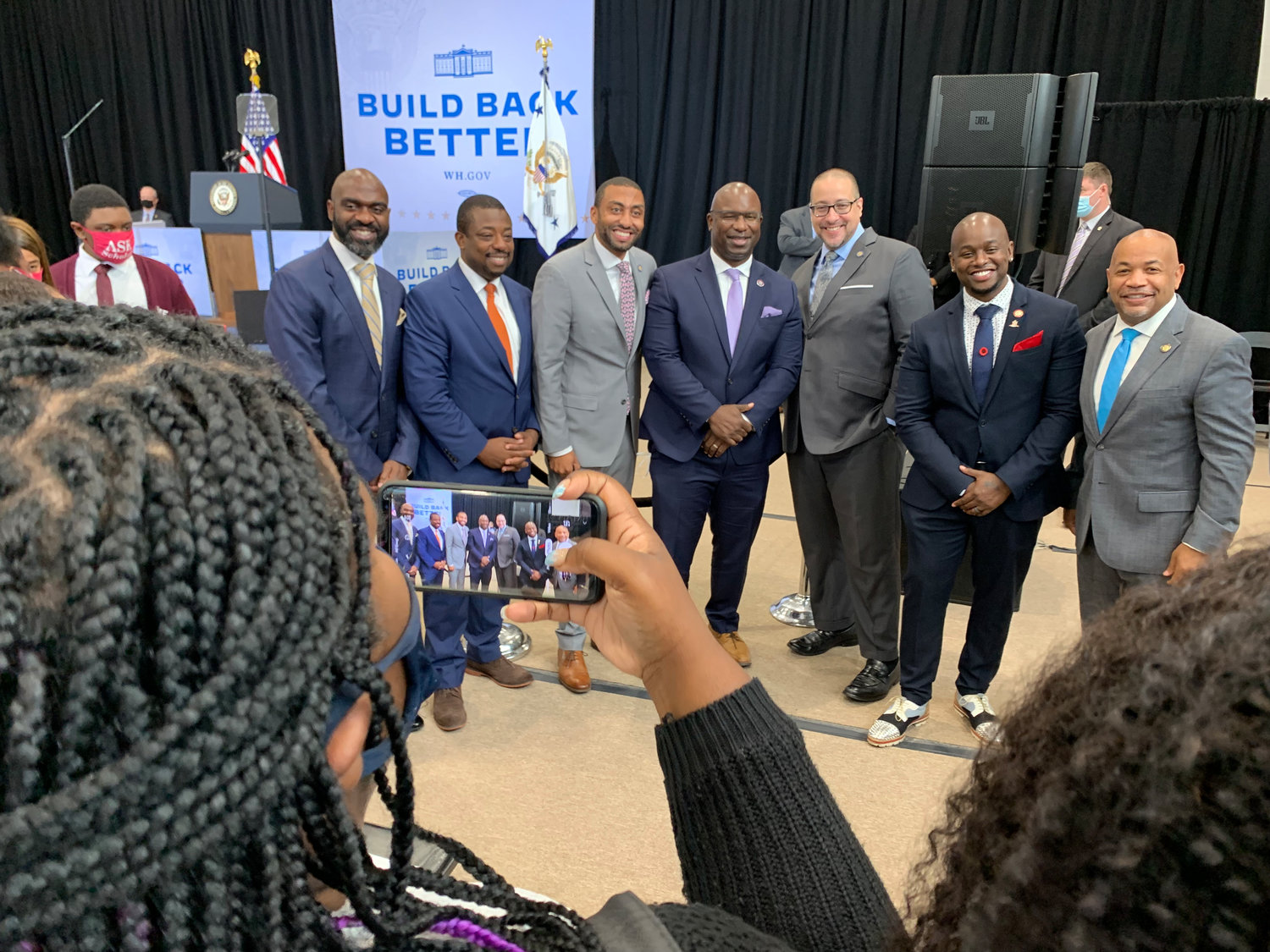 U.S. Rep. Jamaal Bowman, center, joined a number of Bronx lawmakers welcoming Vice President Kamala Harris to the borough last October, ahead of votes not only for President Biden's infrastructure plan, but also his signature Build Back Better. Among those in attendance were U.S. Rep. Alexandria Ocasio-Cortez, whose 'Squad' — which Bowman is a part of — was already warning it would vote against the infrastructure bill if it wasn't considered at the same time as Build Back Better. Now with West Virginia Sen. Joe Manchin telling Fox News he is no longer backing the legislation, it appears Build Back Better may be dead.
MICHAEL HINMAN / File
By MICHAEL HINMAN

West Virginia Sen. Joe Manchin may have surprised the White House with his decision Sunday to no longer back President Joe Biden's Build Back Better plan. But one lawmaker who wasn't? U.S. Rep. Jamaal Bowman.

The Bronx/Westchester County congressman took heat in early November when he and the rest of his informal caucus known as "The Squad" voted against Biden's infrastructure plan.  It's not that Bowman and others — like U.S. Rep. Alexandria Ocasio-Cortez — were against the infrastructure bill, they just feared that passing that legislation before Biden's signature Build Back Better would give moderate Democrats like Manchin and Arizona Sen. Kyrsten Sinema no incentive to ensure Build Back Better ever passed.

And now, with Manchin telling Fox News on Sunday he's no longer supporting the bill, it's believed Build Back Better could be dead.

"This was a game changer," Bowman told The Riverdale Press. "This is a major component of the president's agenda. He ran even more so on this than he did on the hard infrastructure bill. And this is exactly why we wanted to pass both bills together, because I knew that Joe Manchin was not going to want to pass Build Back Better unless we had the hard infrastructure bill as leverage."

Build Back Better was designed to fund a number of programs outside of Biden's original infrastructure plan — spending nearly $2 trillion on social programs like child care, paid family leave and elder care.

Some of the other programs also included  continued monthly payments to families in need under the Child Tax Credit — something Bowman has pushed for heavily since taking office at the beginning of the year.

In fact, more than 75 percent of children in his congressional district would benefit from continuing monthly payments in January. Under the program, the average household would receive $2,900 of benefits, according to Bowman's office, while those with children living in poverty receive an average of $4,300.

Bowman's district has 44,000 children younger than 5, according to the congressman's office, who would benefit from the program, although New York City offers a universal pre-K program of its own.

"I'm devastated because the initial proposal of the Build Back Better bill at the $3.5 trillion mark would have made the Child Tax Credit permanent," Bowman said. "But that was gutted because Manchin and others didn't want corporations to pay their fair share, and didn't want to tax the wealthy."

Yet, even without Build Back Better, Bowman says he has two bills in the works from elements cut from the original legislation, including one that would force corporate polluters to pay into a climate fund, and another — called "Babies over Billionaires" — that would tax unrealized capital gains at 40 percent, which Bowman says could raise $1 trillion over 10 years.

The White House released a statement Sunday afternoon calling Manchin out on his remarks on Fox, saying it is completely counter to everything else he's said both publicly — and to Biden — in the past week.

"On Tuesday of this week, Sen. Manchin came to the White House and submitted — to the president, in person, directly — a written outline for a Build Back Better bill that was the same size and scope as the president's framework, and covered many of the same principles," according to a statement issued by White House Press Secretary Jen Psaki. "While that framework was missing key priorities, we believed it could lead to a compromise acceptable to all.

"Sen. Manchin promised to continue conversations in the days ahead, and to work with us to reach that common ground. If his comments on Fox and written statements indicate an end to that effort, they represented a sudden an inexplicable reversal in his position, and a breach of his commitments to the president and the senator's colleagues in the House and Senate."

Bowman, however, doesn't understand why the White House would be caught off-guard by this turn of events. This is exactly what he and other Democrats who voted against the infrastructure bill warned by taking both pieces of legislation out of order, or at least not passing them both at the same time.

"Well, you know, in my opinion, they shouldn't be surprised," the congressman said. "The president, the Speaker, myself, and the majority of the Democratic caucus wanted both bills to pass together."

And that was set to happen right up to the eve of the vote when some congressional members sought more information from the Congressional Budget Office, automatically delaying any vote on Build Back Better.

"I was worried, very concerned, at that moment because we knew that Manchin wouldn't pass" Build Back Better, Bowman said.

Other key components of Build Back Better that Bowman and other Democrats touted included a guarantee of four weeks paid parental, family caregiving and medical leave — the first time in American history that such a federal program was put into place — as well as a $2.5 billion investment into the Centers for Disease Control and Prevention in an effort to reduce community violence and spending.

A bit closer to home, Build Back Better was intended to include a payroll tax credit for news outlets — primarily local newspapers — that could help curb some of the massive shutdowns when it comes to community news,  that would otherwise create news deserts in  large swaths of the country, as well as here in the Bronx.

Manuel Casanova, a New Rochelle male district leader who has filed to challenge Bowman in next year's Democratic primary, called the latest news on Build Back Better "entirely unfortunate."

"That said, this does not excuse Democrats from bringing leadership to the American people," Casanova said in a statement to The Press. "We can start with environmental legislation and work from there, issue by issue. As leaders, we must reach across the aisle, find commonalities, and craft policies that help move Americans forward.

"The failure to pass Build Back Better does not preclude our future successes."

But Bowman and the White House maintain some hope Manchin might come back to the table and keep Build Back Better alive.

Psaki believes some of the claims Manchin made about Build Back Better — including a negative impact on inflation as well as the climate provisions in the bill — are incorrect, and that if those really are concerns, Manchin should be back in support once he gets a better understanding of Build Back Better.

"Just as Sen. Manchin reversed his position on Build Back Better this morning, we will continue to press him to see if he will reverse his position yet again," Psaki said, "to honor his prior commitments, and be true to his word."