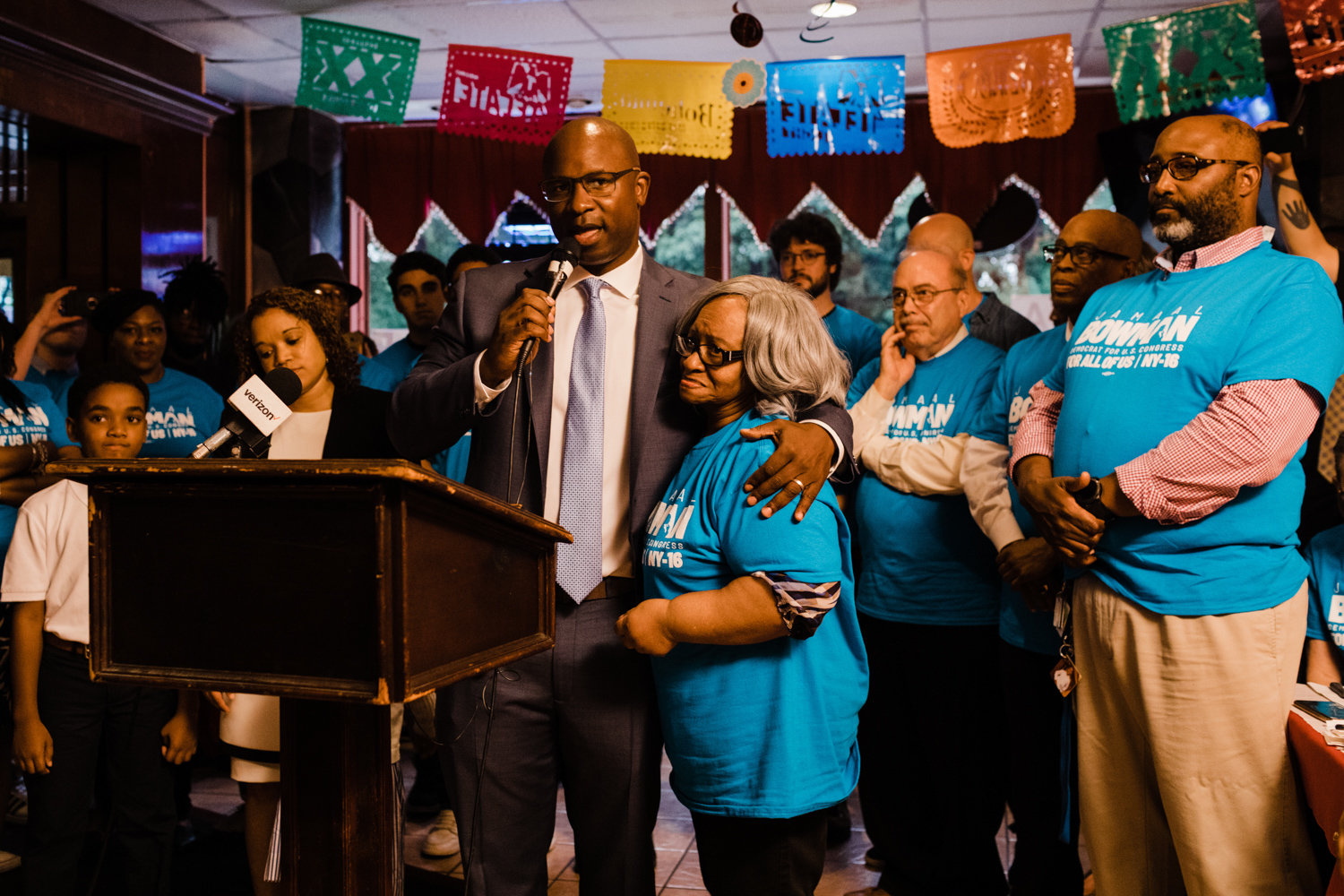 Jamaal Bowman has responded to Hebrew Institute of Riverdale founding rabbi Avi Weiss, saying while they may not fully agree on Israeli policy, they have more in common than they don't.
Corey Torpie Photography

It wasn't too long ago when many political observers believed the race to watch was the one in the 15th Congressional District where a dozen of the Bronx's (and Manhattan's) biggest names are vying to succeed the retiring Jose E. Serrano in what's considered by the Cook Political Report as the most Democratic district in the country.

Stretching over most of the south-central Bronx, of the nearly 300,000 voters there, fewer than 5 percent of them are Republicans. Whoever wins that crowded primary should easily win the general election in November, and likely will have control of that seat as long as they want it.

Instead, with just days before final ballots are cast for the June 23 primary, all eyes are on a neighboring congressional district — the 16th. There are only five active candidates in this particular race, but only two stand out at this point: Eliot Engel and Jamaal Bowman. Engel's Washington resume stretches back more than 30 years, while Bowman — a Bronx middle school principal — has never before sought public office.

Who will ultimately represent the 16th Congressional District is anyone's guess.  But one thing seems to be certain as each precious day slips by — voters in Riverdale could be the kingmakers (or, in Engel's case, the king-retainers).

The 16th district is quite different from Serrano's territory. Republicans account for 18 percent of the electoral base here. And in Riverdale itself, many are more politically moderate, especially when it comes to support for Israel among many of the neighborhood synagogues. Engel has solidly backed the country and its policies from the very beginning, even when such support aligned him more with Republicans than Democrats.

Bowman, however, has different thoughts. He hasn't gone too deep into the topic, concentrating instead on more domestic issues like environmental rights, universal health care and police reform.

But then Avi Weiss, the founding rabbi of the Hebrew Institute of Riverdale, stepped up. He submitted to The Riverdale Press what he called an "open letter to Jamaal Bowman," but after the deadline for its final print edition ahead of the primary. Instead, the politically well-connected father-son duo of Charles and Jeffery Moerdler paid to have the letter published as a political ad "in the public interest," openly questioning Bowman on everything from how he views the Palestinian Authority, to whether or not he supports the controversial Boycott, Divestment and Sanctions movement.

"You're quoted as saying that American aid to Israel should be conditional on exploring Israel's human rights record," Weiss wrote in his letter. "I am of the opinion, as noted by others, that there is no country anywhere facing the same threats as Israel, that has a better human rights record. I am especially alarmed that at no time have you mentioned Palestinian violation of human rights — specifically, the Palestinian Authority's policy of funding the families of those who have committed murderous terrorist acts."

One such violent act hit close to home just 18 months ago when Ari Fuld — son of former SAR Academy principal Yonah Fuld — was stabbed to death by what Weiss described as a "Palestinian terrorist." That terrorist was a 17-year-old named Khalil Jabarin, who was found guilty earlier this year of "intentionally causing death," according to The Times of Israel, and three counts of attempted murder.

Jabarin stabbed Fuld in the back while he was standing near a market in the West Bank. Despite his injury, Fuld chased down Jabarin, who had reportedly targeted other victims, shooting — and stopping — the teenager.

Responding in his own letter to The Riverdale Press, Bowman condemned the Middle Eastern violence, saying that he believes "firmly in the right of Israelis to live in safety and peace, free from the fear of violence and terrorism from Hamas and other extremists."

Yet, Bowman says such violence shouldn't blind the Israeli government from the freedoms Palestinians have sought through a two-state solution, criticizing long-time prime minister Benjamin Netanyahu, who he says focuses too much on "annexation, increased settlement expansion, and racist rhetoric toward minorities."

"I also believe that Palestinians are entitled to the same human rights, safety from violence, and self-determination in a state of their own," Bowman said. "I will defend democracy and human rights for all, and I believe that our government should play no role in encouraging activities that undermine a two-state solution and peace, security and freedom for both the Israeli and Palestinian people."

Although Bowman is not Jewish, he believes this particular religious community has more in common with the African American community than many might think.

"As a black man in America, who has taught low-income children in historically oppressed communities for more than 20 years, I empathize with the need to feel safe and secure within your own skin and community," Bowman said, "whether in Riverdale, Jerusalem or Co-op City. I have been a victim of police brutality, and I have had numerous friends and family members killed within historically neglected communities. I know what it feels like to be a victim of prejudice or fear because of how I look, or the community I am part of."

There are two sides to this debate

But Bowman's same community can empathize with what Palestinians are facing in the Middle East as well.

"I can connect to what it feels like for Palestinians to feel the presence of the military in their daily lives in the West Bank," Bowman said. "I can also understand the crushing poverty and deprivation in the Gaza Strip. I believe Palestinians have the same rights to freedom and dignity as my Jewish brothers and sisters. I will fight for their liberation, just as hard as I will for yours."

Rabbi Weiss also openly wondered if Bowman could be guilty by association, attacking the school administrator's support of U.S. Reps. Ilhan Omar and Rashida Tlaib, the first two Muslim women to serve in Congress, who Weiss described as anti-Semitic. The rabbi also took issue with the third member of the so-called "squad," U.S. Rep. Alexandria Ocasio-Cortez, who many have compared Bowman's campaign to, since he's targeted a longtime congressman with heavy political clout, with the backing of the same progressive activist group — the Justice Democrats — that Ocasio-Cortez had.

"How can we be sure that having received a strong endorsement from AOC — who also co-sponsored a different pro-BDS resolution proposed by Omar — that you are not beholden to her?" Weiss asked. "Are you able to definitively commit yourself to never supporting BDS?"

The answer to that is simple, Bowman said. He doesn't support BDS, be he will "defend the rights of all people to express their First Amendment right to peacefully organize for political change," even if they live in a country without such right codified.

"I have learned through everyday experience the fear that comes with being a minority targeted by violence and hatred," Bowman said. "I know that many of my Jewish friends see Israel as the result of thousands of years of struggle for Jewish rights and security, and I will stand with you to defend that achievement. I believe that all people, wherever they live, have the right to feel safe and protected — and I believe Jewish people are no different in deserving that right."

An open letter to Jamaal Bowman
Bowman to Weiss: We have so much to learn from each other