Despite installation of a traffic light, he believes more can really be done 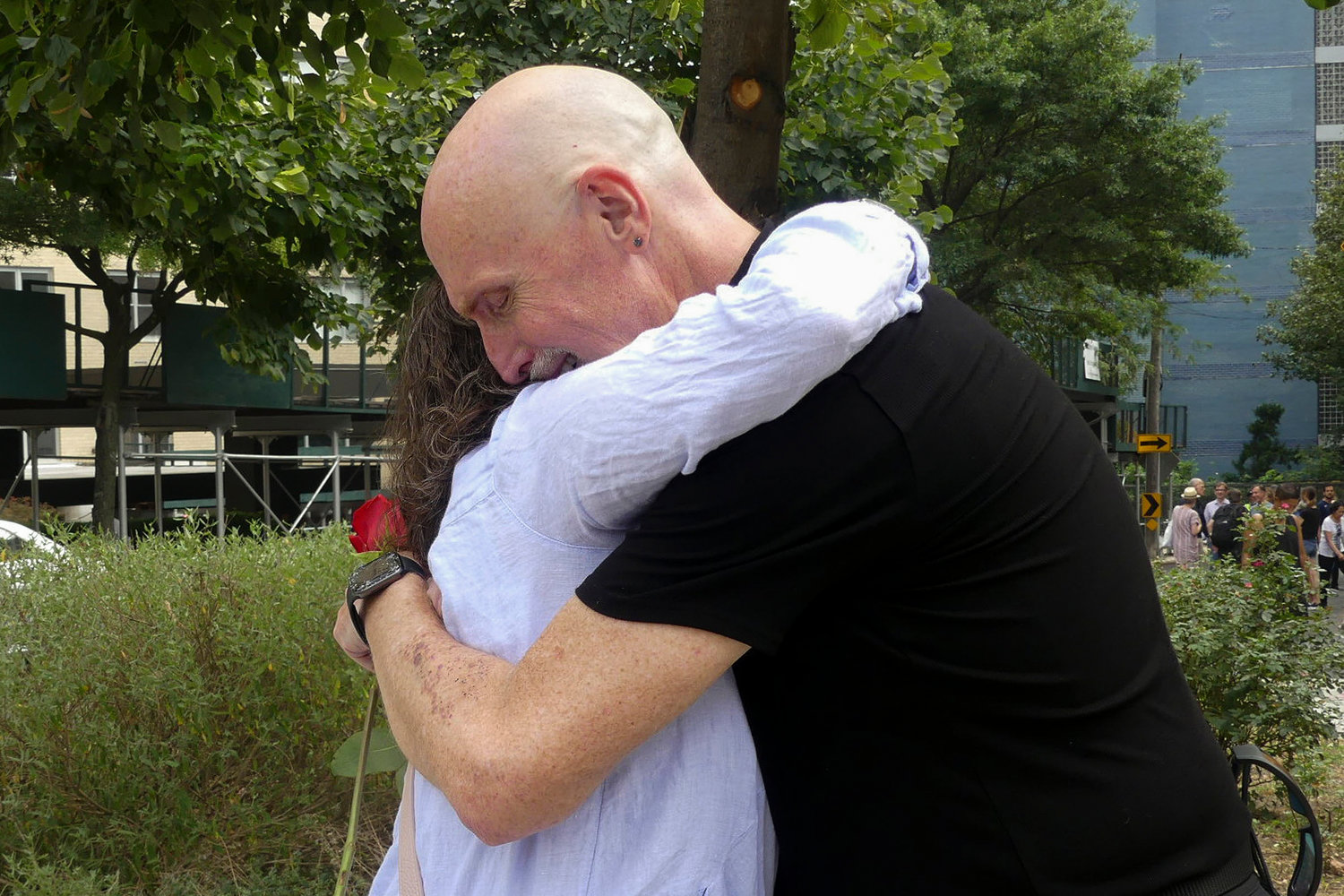 Jim Bradley places a rose in memory of Ruth Mullen at the corner of Johnson Avenue and Kappock Street in Spuyten Duyvil on Sept. 4.
Aissa Sissoho
By Stacy Driks

“People see that green light, and they — they floor it, Ruth (Mullen) said for years, it’s going to take someone dying before something has changed, and she was right,” said Jim Bradley, husband of the late Mullen, an activist and writer who was tragically hit and killed by a BxM1 last year.

After her death, the transportation department tried to step up its game to improve public safety as people were waiting for change. The DOT put up a caution pedestrian sign in February.

“I would call this light version 1.0,” said Bradley.

Bradley’s version of 2.0 adds a speed reducer bump near the intersection because people are still speeding. People are still racing through traffic lights. The mission was accomplished, yet it’s still a problem.

During the application process, the transportation agency visits the requested area and has some rules. Speed bumps are not appropriate on local or through truck or bus routes. However, school locations are given top priority.

Including the agency’s in-person evaluation, they will also consider previous accident reports.

Bradley has an option to request two basic types of speed bumps. There is the hump and there is the cushion. The agency states on its website, humps are continuous raised areas that span the entire roadway, while speed cushions are rounded or flat-topped raised areas placed across the road with wheel cutouts designed to allow large vehicles, such as fire trucks and buses, to pass with minimal slowing or rocking. Some speed bumps can show signage of a speed limit below 15 miles per hour.

Ruth’s niece, Chelsea, recalls the very first time she waited to hop onto the bus that was taking forever. Before she moved to New York, she always took public transportation. However, where she came from in Colorado, it was not the same as in Spuyten Duyvil.

“Ruth would yell at me, that intersection is dangerous,” Chelsea said. “That was the first time I had heard her say that someone was going to die there before they did anything.”

That was a decade ago.

Many people knew Ruth or at least heard of her. She had been pushing for a traffic light across the street from her home at 2500 Johnson Ave. for years. Higher agencies did not listen to her requests or thoughts, however. It took her death for real change to come.

“It’s clearly unsafe, and city bureaucracy is nonresponsive. City agencies kick the can down the road until lives are lost,” Chelsea said

The DOT engineers take into account accident history and traffic volume. From there, they decide on their own which is the best possible solution.

Once Bradley contacted the transportation department, the agency started to debate whether or not they should move along with the traffic light installation.

This past January, the department announced its official improvement for intersection safety for all of New York. The improvement will come along with more traffic signals — especially timed ones, raised crosswalks, and other visibility measures.

As the community waited patiently, the transportation department took temporary measures and put a raised median near the intersection. Pedestrians also found caution signs for yielding to pedestrians.

On Aug. 5 the traffic light was up and running.

“The new light is symbolic,” Chelsea said. “It’s more than symbolic, but it’s not everything.”

Last Wednesday Bradley said he wanted to do something more than just memorialize his wife.