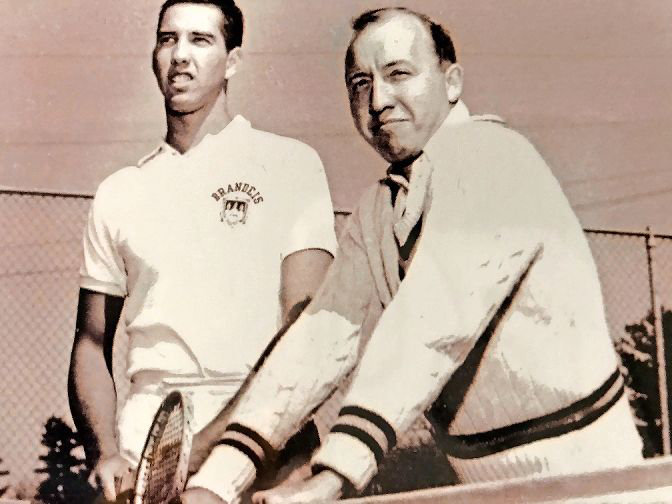 Martin Zelnik, left, blossomed into a competitive college tennis player at Bradeis University with the help of coach Bud Collins, seen here in 1961. Collins would go on to become a tennis commentator for CBS, NBC and ESPN. Zelnik, who returned to Riverdale to grow his architectural firm, will now have an award given to two Brandeis walk-on athletes each year in his name.
Courtesy of Martin Zelnik 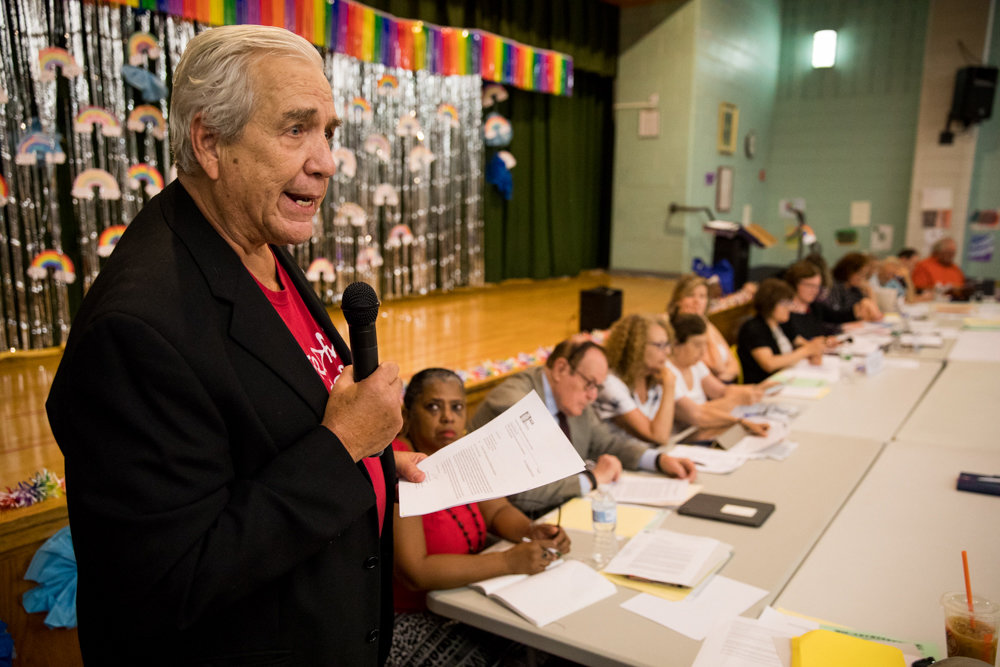 Martin Zelnik spent the past half-century as a celebrated architect from his Riverdale home, and now spends time running a golf course with his son in Florida. His Massachusetts alma mater, Brandeis University, has named an award after Zelnik designed to honor walk-on athletes like him.
JULIUS CONSTANTINE MOTAL / File 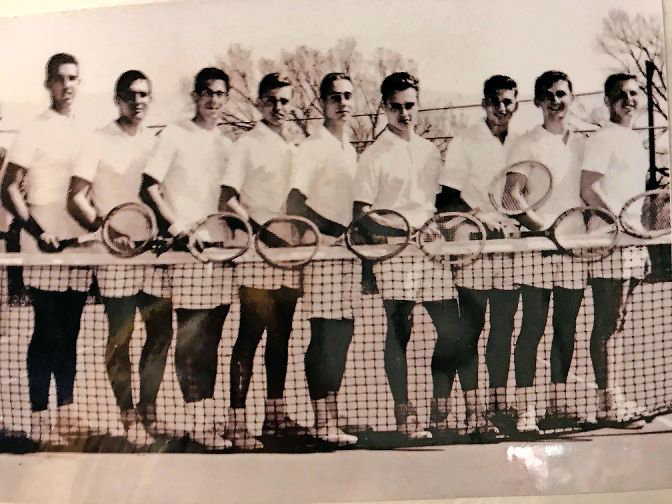 Martin Zelnik, far left, was the captain of his men’s tennis team at Brandeis University in Massachusetts, which went undefeated in 1959. It was led by future tennis broadcaster Bud Collins. One of his early teammates was Abbie Hoffman, one of the infamous ‘Chicago Seven’ who were charged and tried on riot conspiracy charges over anti-war protests during the 1968 Democratic National Convention.
Courtesy of Martin Zelnik
Previous Next
By PETE JANNY

Jackie Robinson is in Major League Baseball’s Hall of Fame, but excelled at three other sports in college as well — football, basketball and track. Still, he’d have to tack on one more to catch up with Martin Zelnik.

The Riverdale native suited up for five different sports teams some 60 years ago at Brandeis University. And he did it as a walk-on. Now the Massachusetts school is honoring Zelnik with a new award named in his honor.

Beginning this year, Brandeis will honor two of its students who followed in Zelnik’s footsteps as non-recruited athletes who go on to excel in their sports. Each will be cited for demonstrating “spirit, enthusiasm and work ethic,” like what the architect himself did on the campus that at one-time boasted Albert Einstein among its faculty member.

When Zelnik first arrived on the young campus just outside of Boston in the late 1950s, he was expected to study, not play sports. But Zelnik was ready to do both — something his hometown alma mater of Riverdale Country School prepared him for. It was there he excelled in football, basketball and, his primary sport, tennis.

Zelnik fondly remembers how one of Riverdale’s English teachers doubled as a tennis coach, puffing on his pipe while observing practice.

“I was the No. 1 singles player at my school,” Zelnik says, “but they weren’t recruiting tennis players in those days.”

Instead, colleges wanted football and basketball players. Zelnik had nothing to show for those sports. Determined to continue his athletic career, however, Zelnik picked Brandeis — a school that was founded less than a decade before, and whose budding athletics programs offered a chance to compete.

And compete Zelnik did, ultimately playing five sports at Brandeis — football, tennis, soccer, basketball and fencing. Yet, despite his all-around talents, Zelnik admits he felt left in the dark when it came to understanding the dynamics of college sports.

“I knew very little about what went on in terms of recruitment of athletes and the concept of (a) walk-on,” Zelnik said.

On top of that, freshmen were only allowed to play on freshmen teams. When Zelnik showed up to his first college basketball tryouts, everyone was split between recruits and non-recruits. Without a guaranteed spot, Zelnik had to vie for one of five roster spots against dozens of other walk-ons like himself.

“At the time I thought everyone just showed up,” Zelnik said. “And it was kind of shocking because we thought everybody would compete at the same time.”

That didn’t slow Zelnik down, however. He’d make that team, and really any other team that caught his eye. And he learned from great coaches along the way —like the late Brooklyn Dodgers and New York Giants football star Benny Friedman. And legendary tennis journalist and sportscaster Bud Collins.

Right from the start, Zelnik experienced the impact from both men. Friedman, who was both an athletics director and football coach, approved the construction of four new tennis courts for Zelnik and his teammates — one of whom was political activist Abbie Hoffman, who later gained notoriety as one of the “Chicago Seven” — a group of college students tried and convicted on riot charges related to anti-Vietnam War protests in Chicago in 1968.

Most, if not all, of those convictions were reversed on appeal.

With Collins at the helm and Zelnik on the court, the tennis program compiled a 30-3 record over a three-year stretch, including one undefeated campaign in 1959.

“Those were two amazing people, and we were very fortunate to have them as coaches,” Zelnik said. “Their credentials speak for themselves.”

With a number of big names tied to Brandeis in its early years, one might imagine it would be hard for anyone to stand out. Yet, Zelnik did in what he calls not only an important gesture, but also an opportunity for his alma mater to honor athletes who are unheralded and not on scholarship.

“In establishing an award to honor walk-ons and multi-sport athletes, we are able to recognize Marty’s legacy,” said Adam Levin, the school’s sports information director. “But not only that, we are able to honor, on an annual basis, some of the unsung members of our teams — the players who don’t get nominated for weekly awards or postseason accolades, but who are just as important to our program’s overall success.”

Zelnik also has his own coaching distinction at Brandeis as its first-ever women’s tennis team skipper.

Even with that athletic prowess, Zelnik also spent his time at Brandeis thinking about a future past sports. After graduating in 1961, Zelnik pursued a career in architecture, earning his masters degree from Columbia University. From there, he started his own firm, Panzel Associates.

Long before he ever imagined anyone even remembered his contributions to the college’s sports program, Zelnik had paved a much different path of success, co-authoring three major design publications. Nowadays, however, Zelnik spends most of his time managing the needs of Moccasin Wallow Golf Club — an 18-hole golf course just outside of Sarasota, Florida, which he co-owns with his son, Noah.

Brandeis’ Zelnik award is intended to remind a specific cohort of athletes at the school of their value, he said. It’s a sentiment which resonates with many who fear the growing monetization of college sports spurred by name, image, and likeness opportunities is undermining its amateurism — a quality oftentimes best exemplified by walk-ons.

“The idea of being able to play is because of the love of sports, not for the money,” Zelnik said. “There are kids that will try out and put in the time, and I think they need to be recognized.”

Combine that with a rich offering of academics, and Zelnik sees it as an opportunity hard to pass up for walk-ons.

“Academically Brandeis is an outstanding school,” Zelnik said. “It has a great reputation and great faculty.”

The first athletes from the school will be handed the first Zelnik awards this spring, with the hopes maybe someday they, too, will join him in the Brandeis Hall of Fame.