Bringing a neglected park back to life 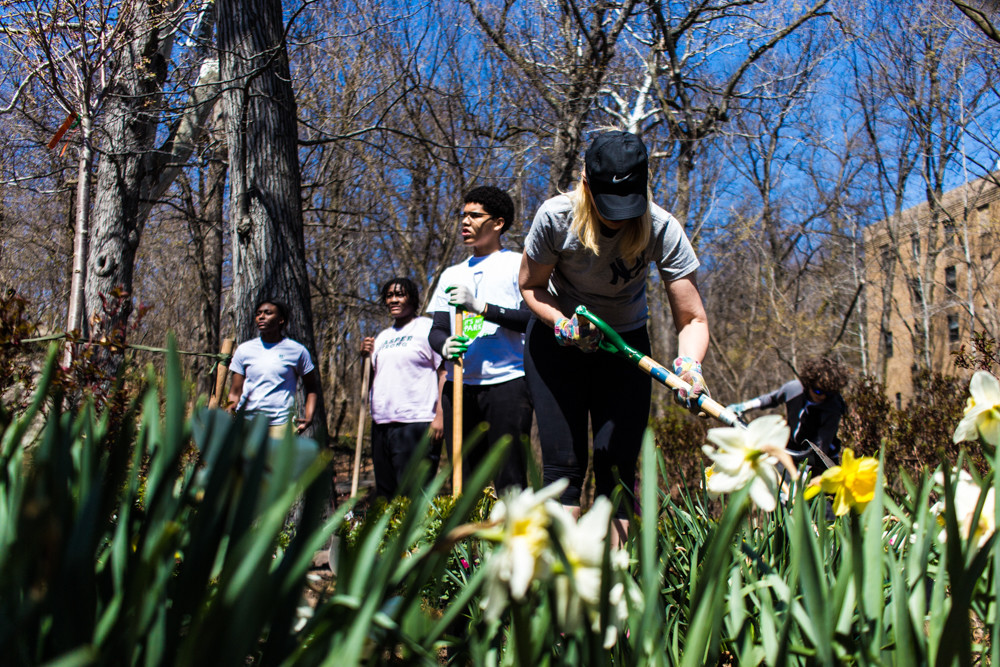 Joanne Nolan, a volunteer with the Stewards of Lower Brust Park, digs a hole. Volunteers came together last weekend to clean the park and plant new trees and flowers.
AARON MAYORGA 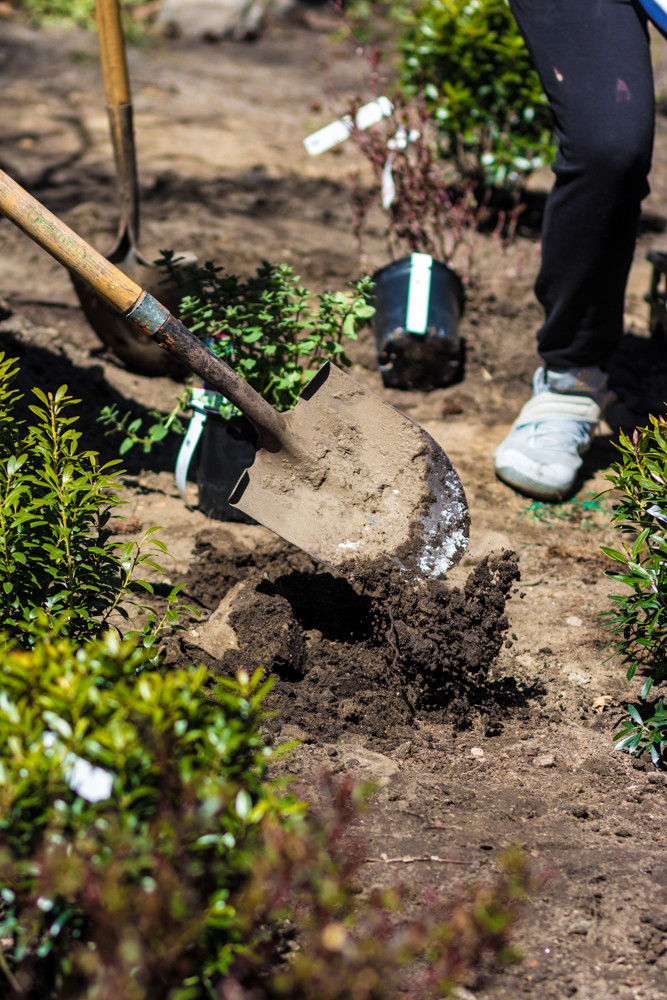 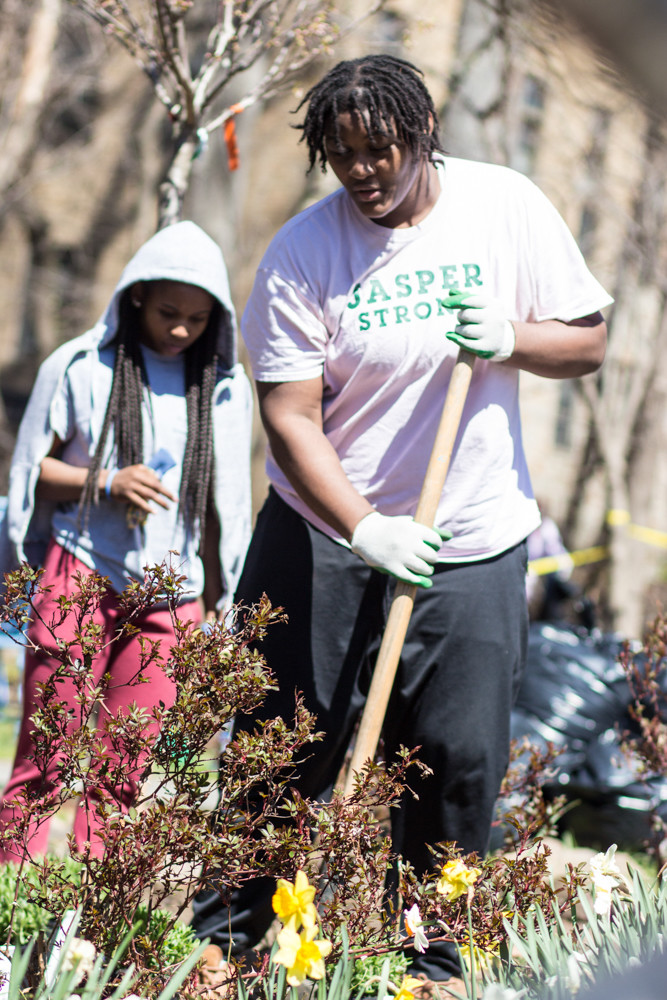 Gabby Cajou, left, and Alex Smith, both members of Manhattan College's women's basketball team, were among those volunteering with the Stewards of Lower Brust Park. Last weekend, the group teamed up with Manhattan College's Green Club to plant flowers in the park's renovated garden.
AARON MAYORGA 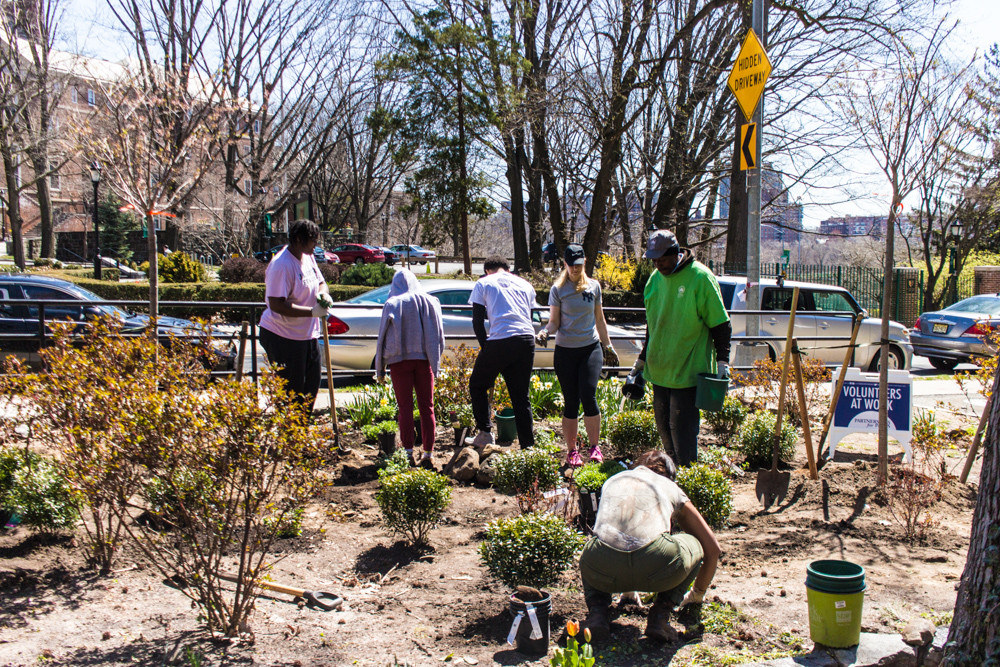 Volunteers work in the garden of Brust Park, located across the street from the main entrance of Manhattan College.
AARON MAYORGA 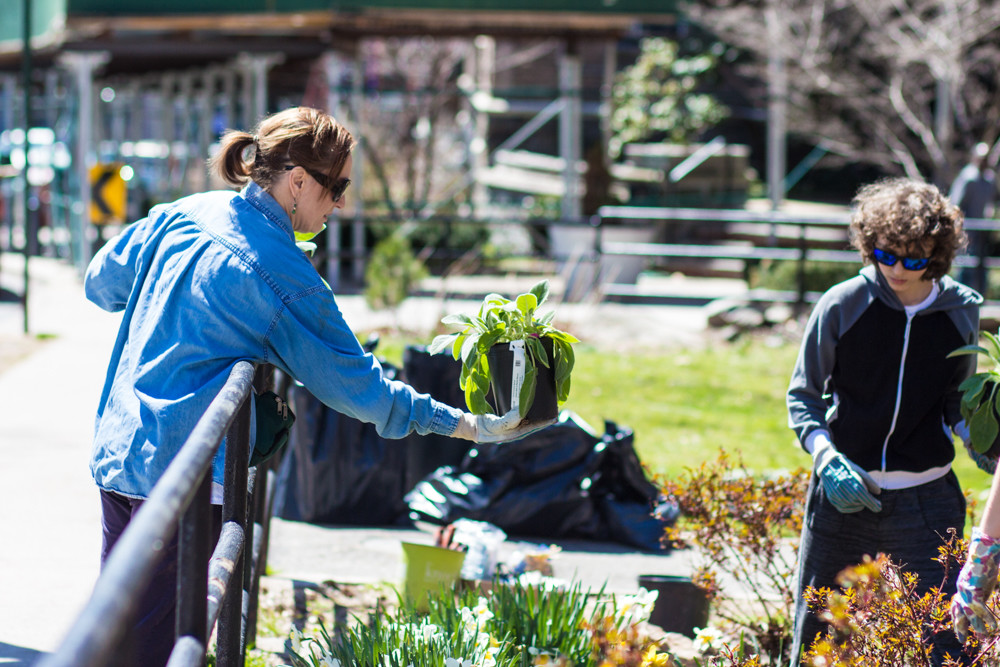 Jacqueline Hosford, a member of Stewards of Lower Brust Park, hands a potted plant over to volunteer Shane Savasta. Last weekend, Hosford and others worked to clean up and enhance the park.
AARON MAYORGA 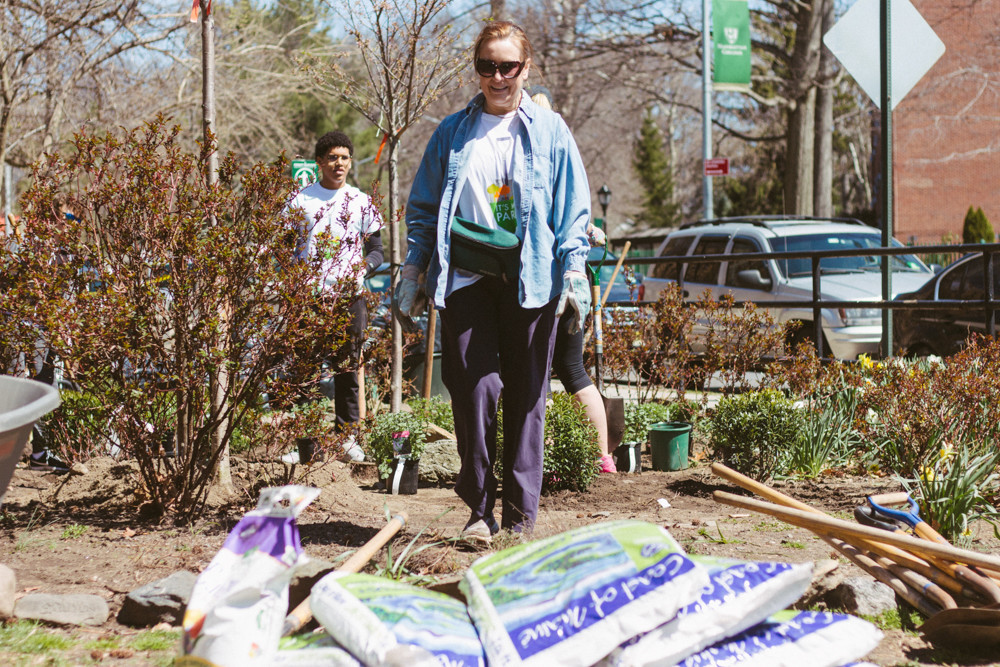 Jacqueline Hosford, a member of the Stewards of Lower Brust Park, walks among the newly planted flowers in the park's renovated garden. Last Saturday, volunteers gathered to improve the park's appearance.
AARON MAYORGA 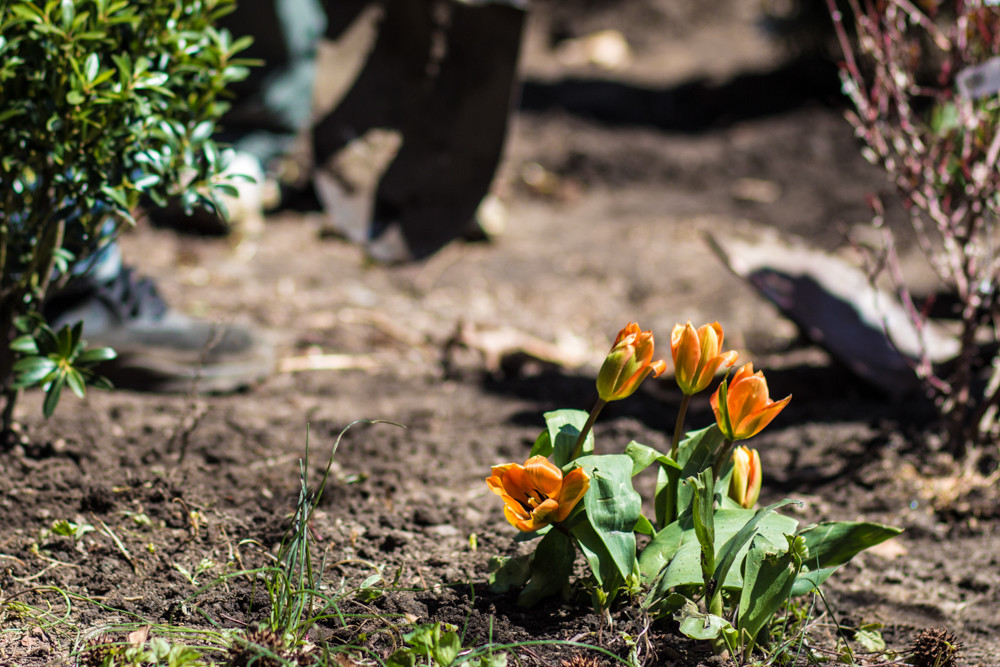 AARON MAYORGA Volunteers from the Stewards of Lower Brust Park and the Manhattan College Green Club planted new flowers and cleaned up the park.
AARON MAYORGA 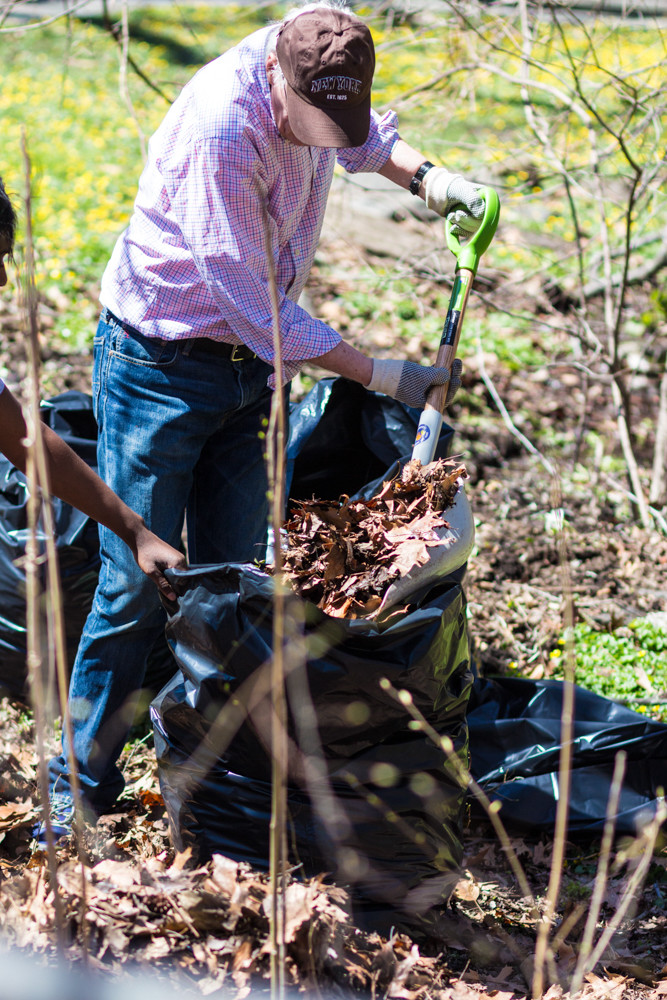 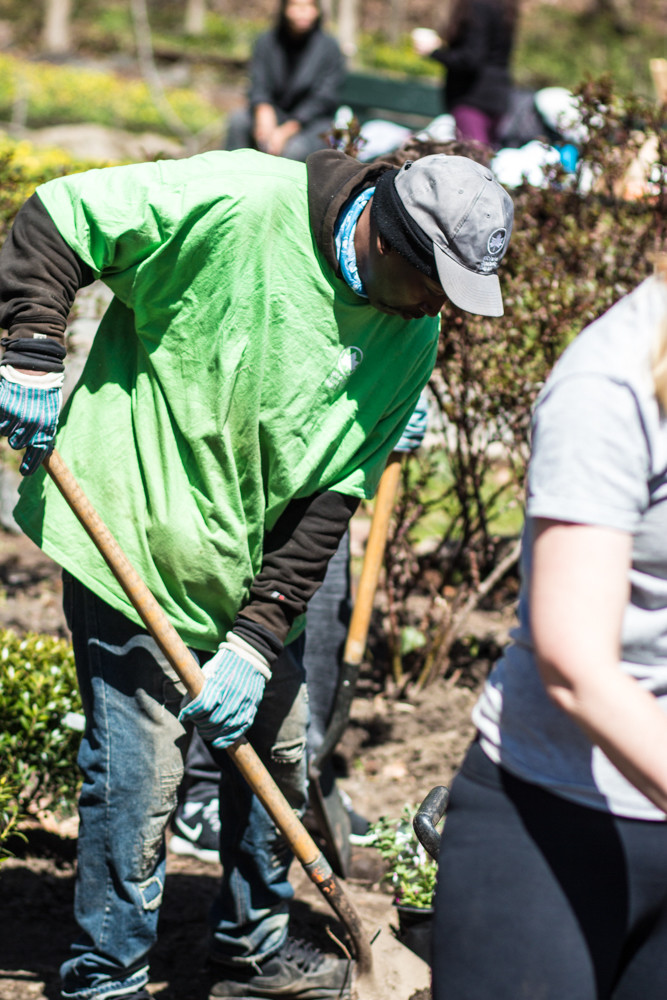 Darrow Whitehead, one of Brust Park's gardeners, digs a hole for planting. Volunteers from the Stewards of Lower Brust Park and Manhattan College's Green Club joined forces to clean up the park.
AARON MAYORGA 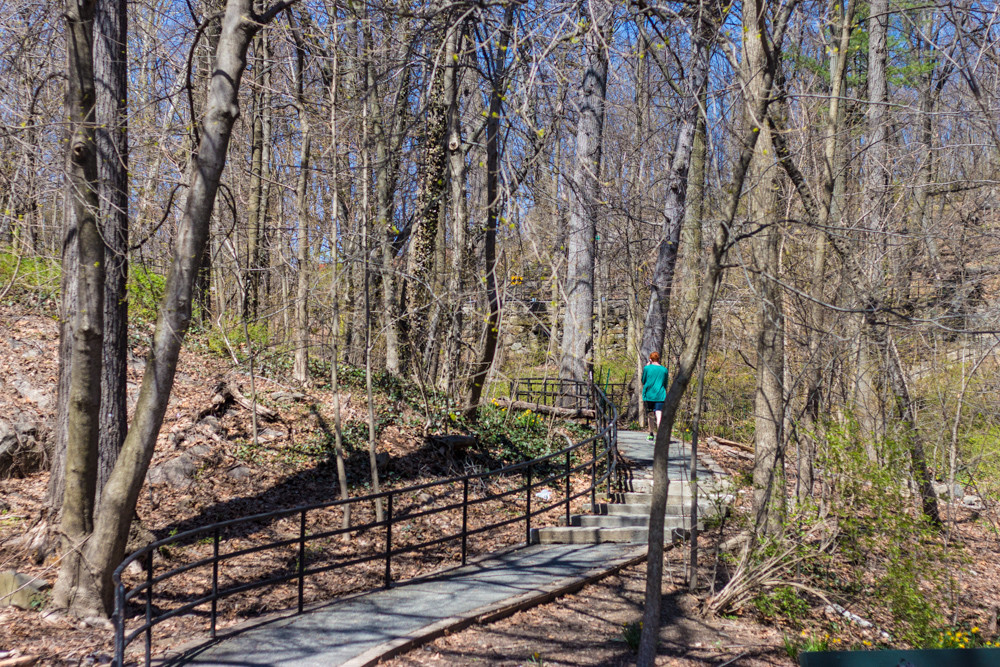 Opened in 1882 and named in 1940, Brust Park features a pathway that connects Manhattan College with Fieldston. Volunteers gathered in the park to revitalize the area last weekend.
AARON MAYORGA
Previous Next
By TIFFANY MOUSTAKAS

Four years ago, Jacqueline and Christopher Hosford were sick of seeing six-foot rose bushes take over the park across from their apartment. So instead of letting it become a sight for sore eyes, they did something about it.

The 1.79-acre park is divided by Greystone Avenue into Lower Brust Park, an area full of greenery, and Upper Brust Park, which contains a playground and is closer to the Ethical Culture Fieldston School.

But for the Hosfords, it’s the park’s lower half that required some sprucing up.

So the couple did just that. Christopher mowed the area at times when the college’s groundskeepers hadn’t done so, and Jacqueline teamed up with the parks department to find ways to encourage more volunteer work from the community, especially during the department’s “It’s My Park” events that take place across the city.

Soon enough, Manhattan College students, neighbors from the Hosfords’ building, and various residents did their share of cleaning up and renovating the park.

Stewards of the park

From there, the Stewards of Lower Brust Park was born.

Now, the Stewards are working on a new mission to renovate a garden just in time for spring and summer. Jacqueline secured a $1,200 grant from the park’s department’s City Parks Foundation that made this renovation a reality.

Although renovations started later than anticipated due to the cold weather and multiple snowstorms this year, Hosford and her volunteer team were able to start planting different trees and flowers last Saturday.

The effort to restore Brust Park is vital to Riverdale, Jacqueline said, because the work is done for the community, by the community.

“It’s us,” she said. “The way these things get taken care of is a group of people who care getting involved to take care of it.”

With Manhattan College so close, its involvement is primarily through its Green Club, a student organization dedicated to educating others on environmentally friendly initiatives, and volunteering to put those ideas in practice. Daniel Aguirre, a Manhattan junior and president of the Green Club, has been part of the group since he was a freshman, and volunteers at the park whenever he’s able to lend a hand.

He recalls a time when his group ventured deep into the park’s forest area to clean, finding an old Mountain Dew soda bottle with an unrecognizable logo.

Aguirre’s mission is to make sure Manhattan students maintain a positive relationship with its neighbors.

“I feel that we need to give back to the community,” he said.

“We try to speak up on the neighbors’ behalf as well because we understand how much time and effort and money the neighbors and our students are putting into making Brust Park beautiful,” he said.

Bennett graduated from the school in 2003 and has been on staff for nearly 10 years. For him, the park has always been a part of its campus despite being across the street.

What the future holds

Looking ahead to the park’s future, Jacqueline Hosford hopes the city’s parks department will improve the stairway through the lower half’s forest and eventually renovate Upper Brust Park.

She also hopes the group becomes sustainable enough that when she and her husband ever decide to step back, they can count on a solid group of volunteers to keep the mission alive.

But for now, Jacqueline’s getting the hang of learning how to maintain a bustling garden — a responsibility not far off from her day job as an interior designer.

“I’m getting the joy of planting and creating something from just nurturing the earth and bringing forth life, but also creating and enjoy(ing) design from a different angle,” Jacqueline said.

“But really, what’s bringing me the greatest joy is how people react and interact, and it was the park and it was the plants. And I can’t tell you how excited thatmakes me feel.”