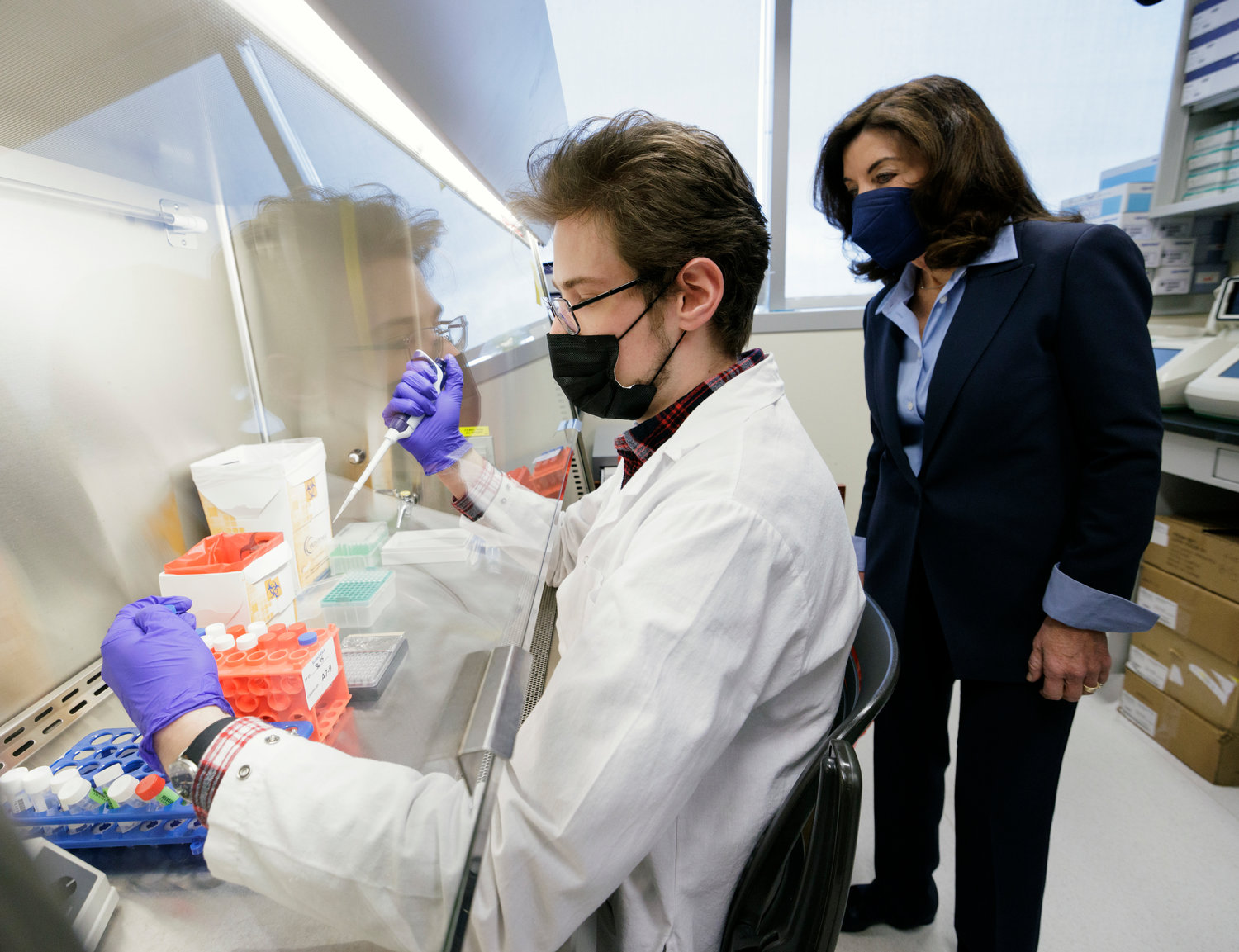 Gov. Kathy Hochul tours the RNA Institute in Albany on Friday, where many of the tens of thousands of COVID-19 tests are processed each day. Although some 1.8 million people have been infected in New York since Dec. 1, positivity rates — and hospitalizations — are starting to go down.
Courtesy of Gov. Kathy Hochul/Mike Groll
By MICHAEL HINMAN

For the first time in nearly a month, COVID-19 cases are dropping in the Bronx — to the point where positivity rates have fallen below the state average.

More than 16.1 percent of coronavirus tests in the Bronx came back as positive on Saturday, according to Gov. Kathy Hochul's office, dipping below the state average of 16.4 percent. The last time the borough did better than the state was Dec. 22 when the Bronx reported an 8.1 percent positivity rate compared to 8.6 percent for the state.

The gap widened significantly over the holidays, reaching a six percentage point max on Jan. 4, when positivity in the Bronx reached just under 28 percent.

But rates started to drop after that, with the Bronx now at the same level it was on Dec. 28. The state as a whole has returned to a positivity rate it hasn't seen since Dec. 30.

Part of the borough's recovery has come from rates not dropping as dramatically in other parts of the state, including the Western New York, where positivity is now at 22 percent. Central New York isn't far behind at 21 percent, while Long Island reports a positivity rate of 19 percent.

Even inside New York City, the Bronx isn't the worst. That mantle belongs to Queens, where positivity rates are dropping, but are now at 18 percent. Staten Island is at 15 percent, followed by Brooklyn at 14 percent, and Manhattan at 12 percent.

That has not slowed down the number of people dying from complications related to COVID-19, however. Since Dec. 1, the virus has claimed 272 people in the Bronx — including another 20 on Saturday. Over the last 30 days, the state has averaged 109 deaths per day, with the Bronx accounting for nearly 8 percent of them.

Overall, 4,046 people have died from complications related to the virus since Dec. 1, with just under 7 percent of them from the Bronx. There have been 1.8 million confirmed cases in New York during that same time, more than 9 percent of the state's population.

Yet, Hochul told members of New Hope Christian Fellowship in Brooklyn on Sunday there is hope the omicron surge could be seeing some softening.

"I have been very happy to report the last few days that our numbers are declining rapidly," Hochul said. "The numbers are going down. Hospitalizations are going down. But Brooklyn was at the epicenter of all this almost two years ago. And it's seared in our hearts, the people we've lost, and the struggles and the devastation that continues to this day.

"But we're going to continue fighting back. People getting vaccinated, getting the booster shots. Getting kids vaccinated so they don't have to be home from schools."

Vaccination rates have climbed significantly since the start of the omicron surge. A little more than 70 percent of the state's total population is completely vaccinated — up nearly 7 percent since Dec. 1. New York City is doing even better, improving its full vaccination rate to just under 81 percent — growth of a little more than 6 percent.

"We are all tired of it," Hochul said. "We're ready to say we're done.

"I'm so excited to be able to announce very shortly in the next couple of weeks — we hope — that we are going to start getting back to a better sense of normal."