Darcel Clark shares what she likes, doesn’t like about the 2019 laws 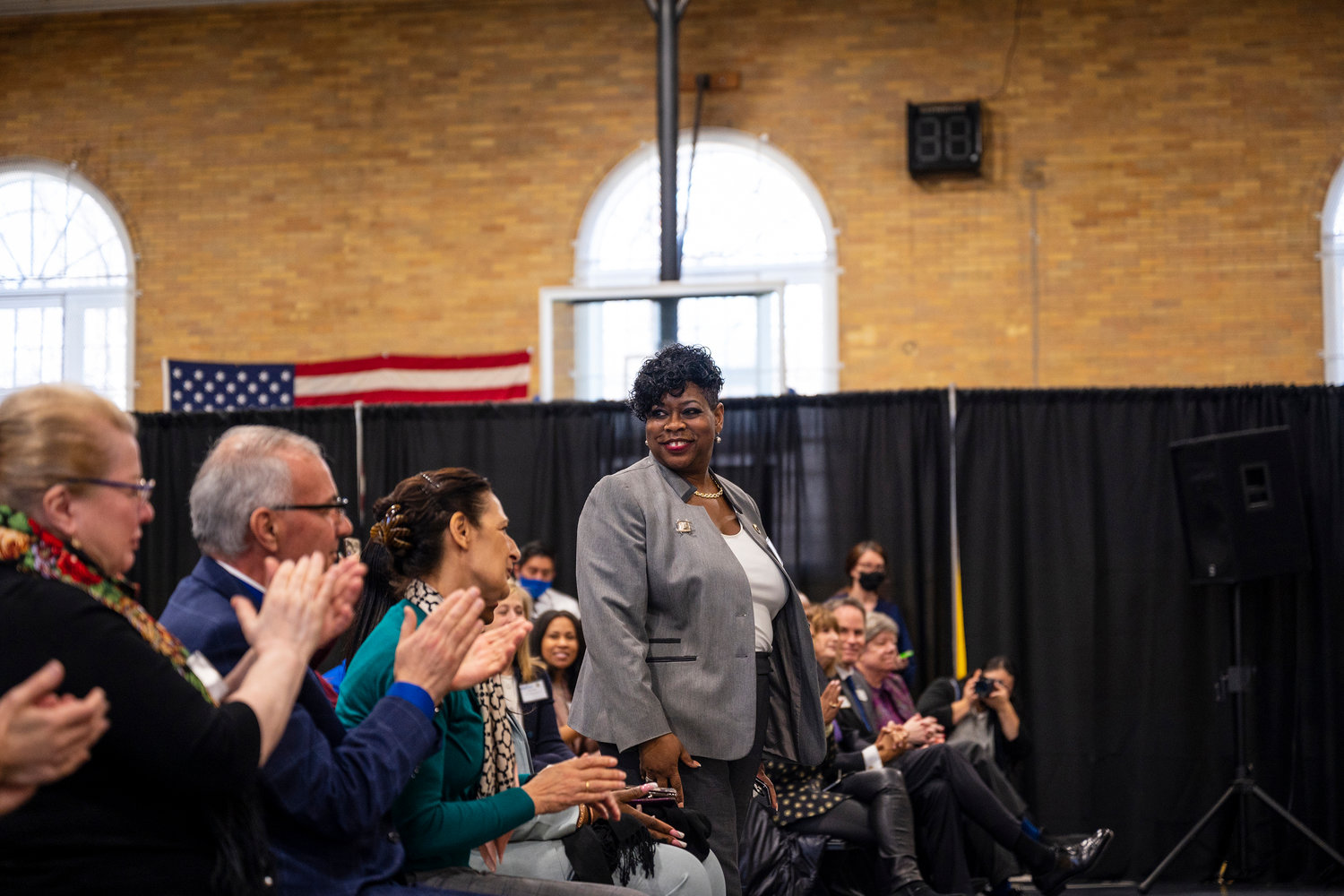 Bronx County DA Darcel Clark was in attendance at Bowman and Pelosi’s March 14 town hall at College of Mount Saint Vincent as well as the April 19 CB8 meeting, where she spoke about bail reform.
Hiram Alejandro DurÃ¡n 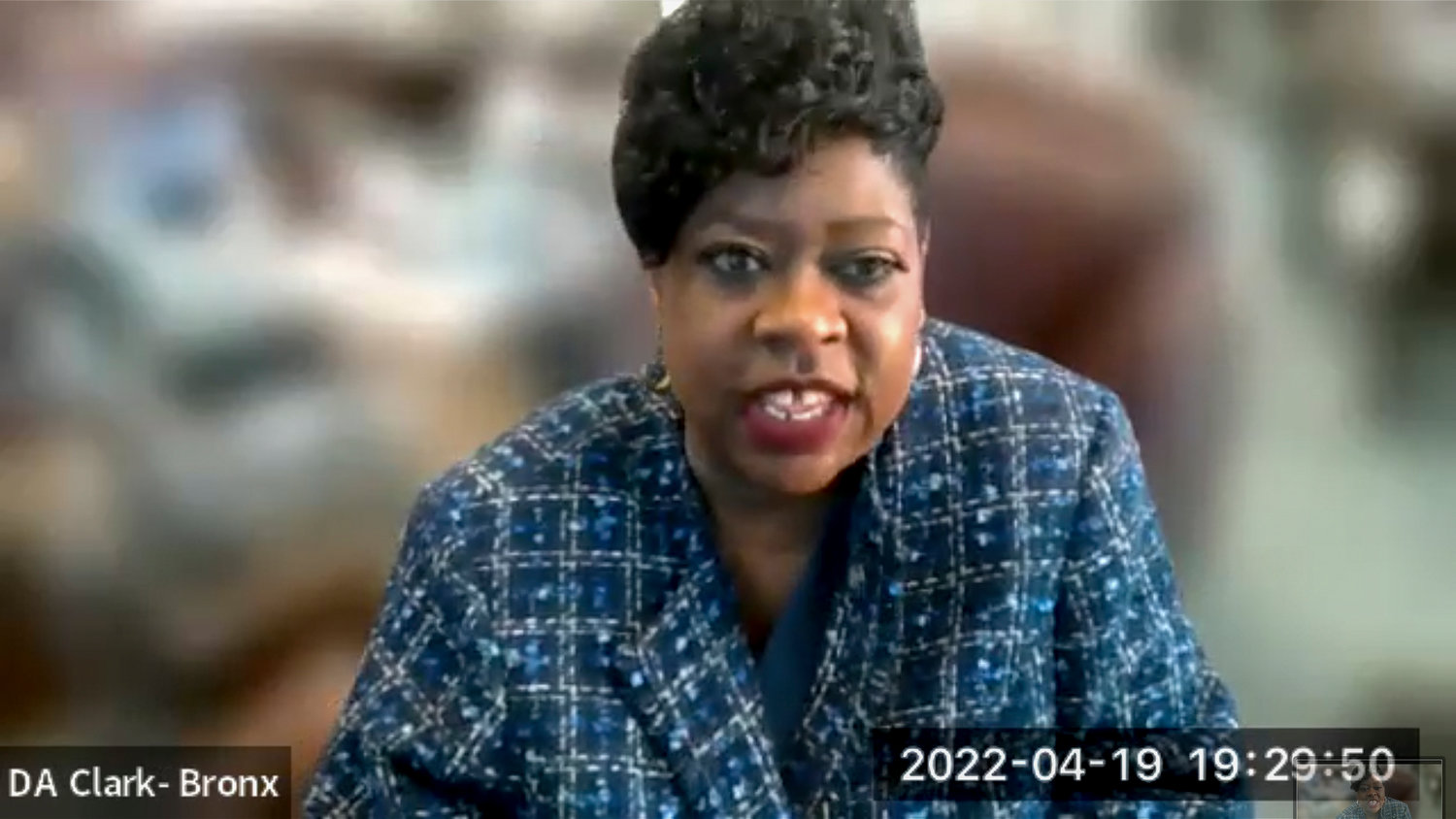 Bronx County DA Darcel Clark answers questions during April 19’s Bronx CB8 Public Safety Committee meeting. She came to the meeting to tell the community how the 2019 changes to the bail system affected her office.
Hiram Alejandro Durán
Previous Next
By SACHI McCLENDON

State lawmakers in 2019 passed landmark legislation limiting a judge’s ability to impose bail in most misdemeanor and low-level, nonviolent felony cases — a major win for criminal justice advocates who argued the bail system that had been in place unfairly punished the poor.

Then, as the laws went into effect, crime rates throughout the city, and nationwide, began to increase, which many critics attributed to the newly enacted reforms. As the debate surged over the cause of this crime spike, Bronx District Attorney Darcel Clark was grappling with the day-to-day aspects of the bail overhaul. As the top law enforcement official in the county, Clark had to adjust how she ran her office.

And at last week’s community board meeting on public safety, Clark shared her thoughts on these new laws, arguing that criminal justice reform doesn’t have to come at the cost of public safety.

Clark, who is in seventh year of office, opened up by saying she thought there were inequities in the state’s old bail system, but that a whole host of problems has emerged since the 2020 rollout. “I’m going to tell you right up front, that I was one of the DAs that thought that some reforms needed to happen in bail because people should not be sitting in jail just because they don’t have the money to pay bail,” she said.

On the other hand, Clark said,  a small percentage of those who were let out on supervised release kept being arrested for other crimes, yet judges couldn’t do anything about it as their ability to set bail had been hamstrung. “Just continue to commit crimes over and over and over,” she said. “Those were the people that were the problem.”

Several of the reforms have been modified since they were enacted in 2020. Judges have a bit more discretion when it comes to repeat offenders and all gun cases are now bail eligible. Yet, the major issue for Clark is not the spirit of these reforms, but rather the lack of attendant funding that came along with them.

In addition to the changes in bail, the legislators also reworked the state’s discovery laws. Prior to 2020, prosecutors had basically until the eve of a hearing or trial to turn over evidence to a defense team. Once the discovery reforms were first rolled out though, they then had just 15 days following arrests. They were also now responsible for turning over much more potential evidence to the defense than they were required to in the past.

In July 2020, legislators tweaked the laws to extend that time a bit. Now the DA’s office has 20 days to turn evidence over in cases in which the defendant is locked up. And if the defendant is out of jail, they then have 35 days.

Even with the extension, Clark said it’s been a challenge to meet those discovery deadlines. “It has just become too much of a burden,” she said, adding that more than 100 lawyers have recently resigned from her office. “You can’t pass laws, and not put money into the laws that you have passed. So what has happened is that we, as prosecutors, end up having a lot of unfunded mandates.”

Beyond highlighting changes to the bail and discovery laws that would help her office in a day-to-day fashion, Clark also stressed the importance of investing money in social services that prevent people from committing crimes in the first place.

“As a DA I should be the last resort. I shouldn’t be the first resort that you all have to use in order to deal with quality-of-life issues that are happening in your neighborhood,” she said. Clark wants to see more money put towards mental health services, homeless outreach and youth-intervention programs.

“We need the community to speak up to the mayor and the city and the governor and say, put the resources in our communities and let us help those who live in our community that need the help to keep them from going into the criminal justice system.”

Taken all together, Clark is trying to balance public safety while also advocating for criminal justice reform. While she’s unapologetic about being a district attorney and standing up for the rights of victims, she also said, “I cannot prosecute my way out of the problems that are happening in this county. I’m just not going to be able to. I don’t have the lawyers to do it. I don’t have the staff to do it. And quite frankly, it’s not the way to do it.”