Voters may have given Engel an early retirement 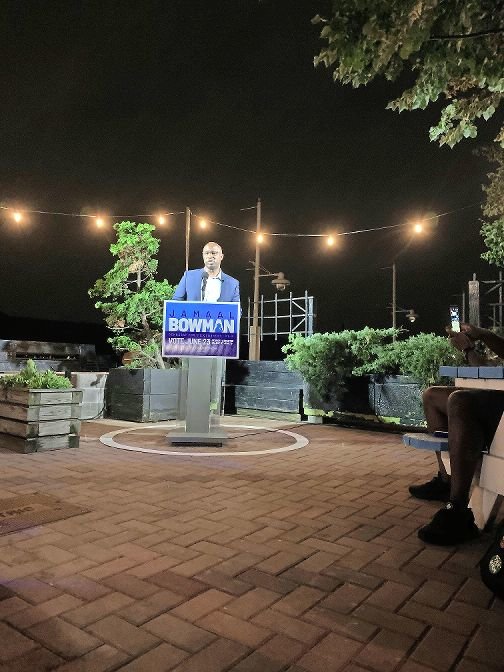 Jamaal Bowman speaks to supporters in Yonkers after learning he had a significant lead over incumbent Eliot Engel in early voting returns on June 23.
KIRSTYN BRENDLEN
By MICHAEL HINMAN

No matter how the primary race for the 16th Congressional District is decided once absentee ballots are counted, one thing is for sure — the people want change. And they want it now.

In what has to be one of the most unusual elections in New York history, the race to decide who will represent Democrats in the November with an almost guaranteed trip to Washington is now in the hands of absentee voters. Counts of “live” votes from early polling and Tuesday’s primary handed former middle school principal Jamaal Bowman a lead over incumbent U.S. Rep. Eliot Engel that it almost impossible not to call “insurmountable.”

Of the more than 44,000 votes counted as of early Wednesday morning, Bowman claimed nearly 61 percent of them compared to just 34 percent for Engel. It was a total vote difference of nearly 12,000.

“Tonight as we celebrate, we don’t just celebrate me as an individual,” Bowman said during a post-primary rally in Yonkers Tuesday night. “We celebrate this movement. A movement designed to push back against a system that is literally killing us. It’s killing Black and brown bodies disproportionately, but it’s killing all of us.

“It’s killing us mentally, psychologically and spiritually, (and) is forcing us to live in a country and a world where so many people are hopeless, and have lost faith — not just in a political system, but in each other.”

Engel showed up to vote Tuesday afternoon at Riverdale/Kingsbridge Academy, guided by his wife, Patricia. Afterward, he described Bowman as someone no one knows, because he didn’t participate in the same political circles.

“We have had many different things in this community, celebrations and other things,” Engel said. “We had (National) Night Out against crime. We had rallies against anti-Semitism. We had all kinds of rallies for racial justice. He wasn’t at one of them, because he has not lived in the community, he has not participated in the community. So he thinks that he can make it fuzzy and people will get confused.”

However, when Engel was asked about his own absence through almost the entirety of the coronavirus pandemic — where he holed up in his suburban Washington home for months — the congressman had a new reason to share: He was under quarantine for exposure to the virus. Twice.

Engel did not elaborate on why he only had a doctor in Washington, and didn’t have one he could see in the Bronx.

If the results hold up through the counting of absentee ballots over the next week or so, Bowman will have succeeded in continuing a Bronx political revolution that started in 2018 with the elections of U.S. Rep. Alexandria Ocasio-Cortez and state Sen. Alessandra Biaggi.

Both Ocasio-Cortez and Biaggi upended well-entrenched politicos who believed they were unstoppable. Those incumbents — U.S. Rep. Joe Crowley and state Sen. Jeffrey Klein — didn’t take their challengers seriously until it was too late. The same mistake may have ultimately doomed Engel as well, who had more than 30 years in Congress, and was chair of the powerful House Foreign Affairs Committee.

“I think there is a paradigm shift happening in our nation,” Bowman told The Riverdale Press on Tuesday night. “I think it’s been happening for quite some time.

“We’re a nation that wants new ideas and new people and a new vision going forward, and maybe even going forward, there won’t be much of a surprise anymore. Because AOC was an aberration. When you do it again, now it’s like, ‘Wait a minute, something is happening in this country.’ And now they’re going to have more people getting involved and paying attention.”

Bowman had to overcome a crowded Democratic field, one that he wasn’t even the first to enter. Instead, that honor went to another educator, Andom Ghebreghiorgis, who dropped out of the race earlier this month and endorsed Bowman. Ghebreghiorgis remained on the ballot, however, and finished behind Chris Fink and Sammy Ravelo, both of whom hovered around just 1 percent of the initial vote.

Bowman used his progressive credentials to earn endorsements from the like of U.S. Sens. Elizabeth Warren and Bernie Sanders. Engel, on the other hand, took the establishment route with the backing of former Secretary of State Hillary Clinton and House Speaker Nancy Pelosi.

In the waning days of the campaign, the battle between the two candidates took a hard turn straight to religion. Hebrew Institute of Riverdale founding rabbi Avi Weiss penned a letter intended to be published in the Opinion pages of The Press openly questioning Bowman’s support for Israel. Because the letter was submitted past deadline, and would not be published, Weiss’ friends Charles and Jeffery Moerdler paid to have the letter published as an ad.

“You’re quoted as saying that American aid to Israel should be conditional on exploring Israel’s human rights records,” Weiss said. “I am of the opinion, as noted by others, that there is no country anywhere facing the same threats as Israel, that has a better human rights record. I am especially alarmed that at no time have you mentioned Palestinian violation of human rights — specifically, the Palestinian Authority’s policy of funding the families of those who have committed murderous terrorist acts.”

Bowman responded by saying he would “defend democracy and human rights for all.”

“As a Black man in America, who has taught low-income children in historically oppressed communities for more than 20 years, I empathize with the need to feel safe and secure within your own skin and community,” Bowman wrote. “I have been a victim of police brutality, and I have had numerous friends and family members killed within historically neglected communities. I know what it feels like to be a victim of prejudice or fear because of how I look, or the community I am a part of.”

Bowman’s written response to Weiss, which was published exclusively by The Press, earned mostly praise on social media, including from James Zogby — from the family famous for its polls — called it a “smart, balanced statement,” while another Twitter user who goes by the name “Elder of Ziyon,” said Bowman “didn’t answer a single specific question.”

With an undetermined number of absentee ballots still outstanding, Engel was not ready to concede the race ast of Tuesday night.

“Congressman Engel is proud of his progressive record, and looks forward to the final tallies from the full Democratic electorate in the Bronx and Westchester,” his campaign said, in a statement. “The bottom line for Congressman Engel is that every voted deserves to have their voice heard in our electoral system, and every primary ballot must be counted to ensure that happens.”