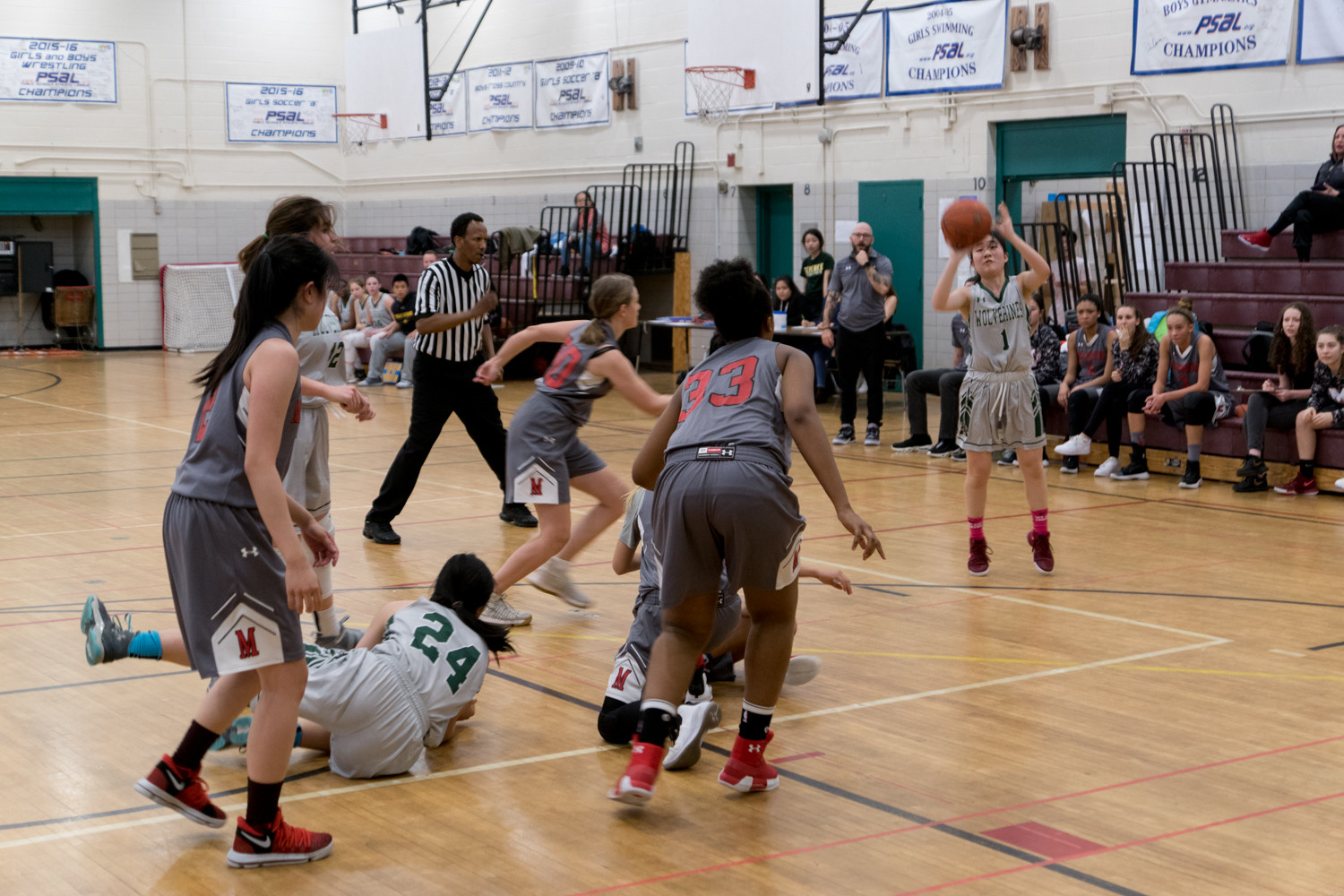 Senior guard Michelle Kim, who led Bronx Science with a game-high 15 points, gets ready to launch a three-pointer in the Wolverines’ PSAL playoff victory over Millennium.
JULIUS CONSTANTINE MOTAL 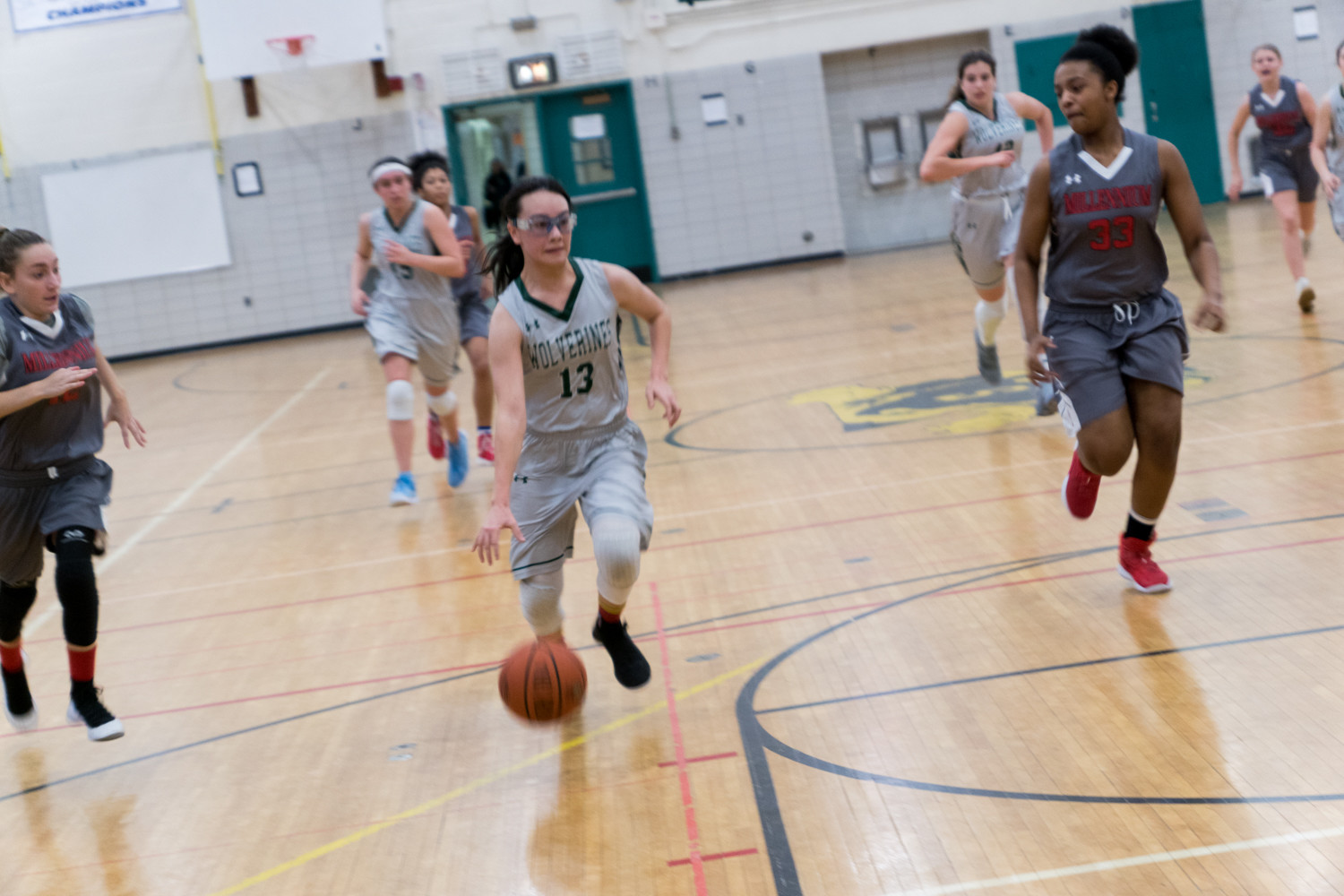 Bronx Science’s Sarang West, who had five points and four rebounds in the Wolverines’ playoff win over Millennium, shows off her ball-handling skills versus the Lady Phoenix.
JULIUS CONSTANTINE MOTAL
Previous Next
By SEAN BRENNAN

Mike Mei was not at all pleased with his team as they prepared for their second-round playoff game against Millennium High School last week. Not pleased at all.

It had been two weeks since Bronx Science had knocked off Cardozo in their playoff opener, and the rust was showing in practice.

“I thought we had a couple of really solid practices leading up to this game, but that one on Monday was not very special,” Mei said. “That layoff we had, that was on display. I actually sent the kids home before the end of practice because they weren’t ready to go, and you could definitely see that the whole week off did things to affect our rhythm and concentration.

“But they got the message.”

The Wolverines, who hang their hats on a rather staunch brand of defense, dug their heels in against Millennium. They held the Lady Phoenix to just two points in the third quarter as Bronx Science broke open a tight game and rolled to a 48-29 victory in a Public School Athletic League second-round playoff game.

The win moves the seventh-seeded Wolverines into the quarterfinals where they will travel to No. 2 seed Brooklyn Community High School on March 7.

“I’m very, very proud of the defensive effort,” Mei said. “Offensively, we left some things to be desired, but we earned ourselves another week to work on those things. Hopefully in our next game we can sink a few more shots. We’re going to need it.”

Science limited Millennium to just 10 points in the first half as the Wolverines posted 24 for a comfortable lead at halftime. Mei’s message at halftime was simple: Don’t let up.

“We talked about just keeping our pedal to the metal and not letting them get back into the game,” the coach said. “We have certainly squandered some leads at halftime in the past, so it was important that we kept the pressure on, and we continued to be aggressive.”

Most notably in that decisive third quarter, when Bronx Science put the defensive clamps on the Lady Phoenix, opening up a 32-12 advantage by the end of the stanza. Millennium tried to make a run in the final quarter, and at one point even managed to trim its deficit to 14 at 37-23. But hot shooting by Science’s Michelle Kim and Carolina Lopez kept the Lady Phoenix at bay, and the Wolverines were off to the quarterfinals.

Kim, a senior, led Bronx Science with 15 points. Lopez added nine and Christina Satina chipped in with eight. Freshman Lucy Del Deo had 14 rebounds in the win for Science.

“At halftime we knew it was still anyone’s game,” said senior Georgia McKay, who had four points and eight rebounds. “I mean, you can come back from a 10- to 12-point lead very easily, so we just made sure we kept the energy up and kept the intensity going, and we just ran the defense very well.”

This Science team, McKay said, has a nice mix of fresh faces in Lopez, Del Deo and Sarang West, to go along with a veteran group that includes McKay, Kim, Satina and Victoria Phang, that has now led the Wolverines to PSAL’s Elite 8.

“This year we have the perfect combination of new talent with fresh energy and experience,” McKay said. “So with our freshmen, combined with my co-captain Michelle Kim and I, we have a good blend, and it works very well.”

Science will have a tall task in the quarterfinals when it takes on a Brooklyn Community team that has yet to lose in league play. But Mei is not about to underestimate his gritty crew.

“I think we still got something left in the tank,” Mei said. “Our seniors are playing like seniors, leading the way. And our defense will always give us a chance to be in games. If our offense comes around, hopefully we can surprise some people.”

As for McKay, in her final go-round, she is not quite ready yet to call it a career.

“It’s a little bittersweet because this is my last year,” McKay said.

“I’m so excited to be here because this is the farthest we’ve gone since I’ve been here. We’re all very excited.

“Our girls really want to win and if we can go all the way, that’s that we’re here to do. We’re not joking around.”